Time
Car park to U Pass via Mistake Creek, 5hr; U Pass to car park via Hut Creek, 3hr

GPX File
U Pass (gpx, yo 92 KB)
Your device does not support GPX files. Please try a different device.

Thousands of people drive SH94 to Milford Sound each day in the summer, but almost all drive straight past one of the most stunning tramps in Fiordland – U Pass.

This trip can be done comfortably as an overnighter by camping on the open river flats of Mistake Creek, but if time is short, it can be completed  in one day.

After leaving the car park, there’s a three-wire bridge crossing the Eglinton River and then a well-marked track which meanders through mossy beech forest, offering glimpses of Mistake Creek through the trees.

The track crosses to the true right of Mistake Creek, which is usually low, but the  river can pose a real danger when it’s swollen – trampers have drowned here.

Beech forest gives way to thickets of ribbonwood on tussocky flats near the top of the valley. The scene on my trip was right out of a tourist brochure – the right branch of Mistake Creek was shimmering azure in the morning sun, with Pyramid Peak and Ngatimamoe glinting tantalisingly in the distance.

From here, the track follows up Mistake Creek through beech forest. An ivory waterfall ringed by bluffs becomes visible as the forest thins to scrub. 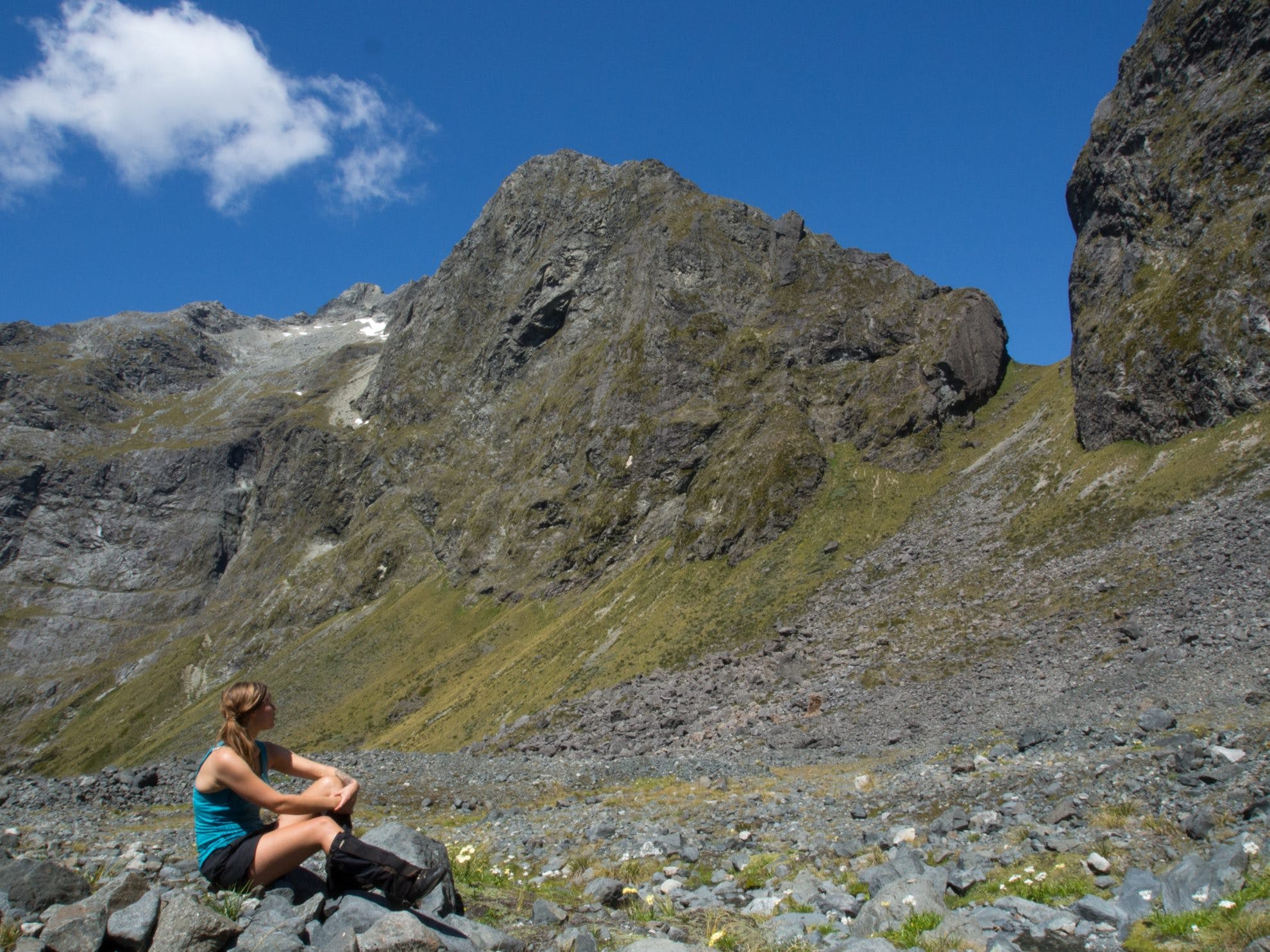 View to the distinctive U Pass. Photo: Jo Carpenter

The lower section of the waterfall can be difficult, but there’s a natural rock staircase to the true left of the creek, which can be scrambled up to reach the cirque at the top. On my trip, the ground was studded with buttery snow marguerites, which leant a festive air to the forbidding rock faces. U Pass is visible as the obvious gap to the true right of the cirque, like a missing tooth in the jaw of mountains. Small grassy flats offer a tempting campsite. Towards the pass, the trail climbs steeply through scree and tussock.

The pass stands at 1395m, before diving sharply down into the Hut Creek catchment. A faint trail through the chalky scree provides a straightforward route to the open river flats of Hut Creek. Although I could hear splashing water melting off the snowdrifts at the head of the valley, Hut Creek appeared to be subterranean here, with a dry riverbed slicing the valley in two.

Following the riverbed, an orange triangle heralds a fragment of track that cuts through a glade of beech forest. The river flats opened up again and the track promptly disappears, so I continued by splashing down the stream, which had now emerged and was refreshingly cool.

Although I was on the look out for the reappearance of the track, I managed to miss the orange triangle and ended up hopping from boulder to boulder as the river becomes increasingly gorged. Realising my mistake, I bashed through the beech forest and came across the track again, which supplied much faster travel to the Eglinton Valley.

A refreshing dip in the gelid waters of the Eglinton River was the perfect way to finish off an excellent day.