The promise of only four hours walking and a gentle gradient lured our group on an overnight trip to Mitre Flats Hut by way of Barra Track.

At first, our spirits high, we headed along the easy farm track beside the Waingawa River, which was flecked with white riffles and punctuated with massive rocks. It ran clear and shallow enough for us to see its stony bed. After half an hour in showery weather, we climbed away from the farm on to the bush-clad sides of the river gorge. The Barra Track follows the Waingawa River upstream, with most of the tramping through the bush above the river.

Underfoot was wet and slippery – wet rocks and ladders of roots made for slow progress. It was ‘hands-on’ walking. One moment I’d hold a tree to steady myself, the next I’d be on my hands and knees, or grasping roots as handholds on a climb. The climbs though, were mostly scrambles to creeks and up again, or around fallen trees or navigating across old slips. Above us were tall rimu, first one and then a row – grand trees rooted in the valley sides around which the lesser trees grew. Other large trees – beeches, miro, matai – interspersed the forest canopy.

The map showed creeks, which one of our number had been counting, so we tried to work out how many more creeks to the hut. But with the rain, temporary creeks had formed and after a few discussions about whether the next couple of creeks were real and countable creeks, we just let it go and ceased trying to count. 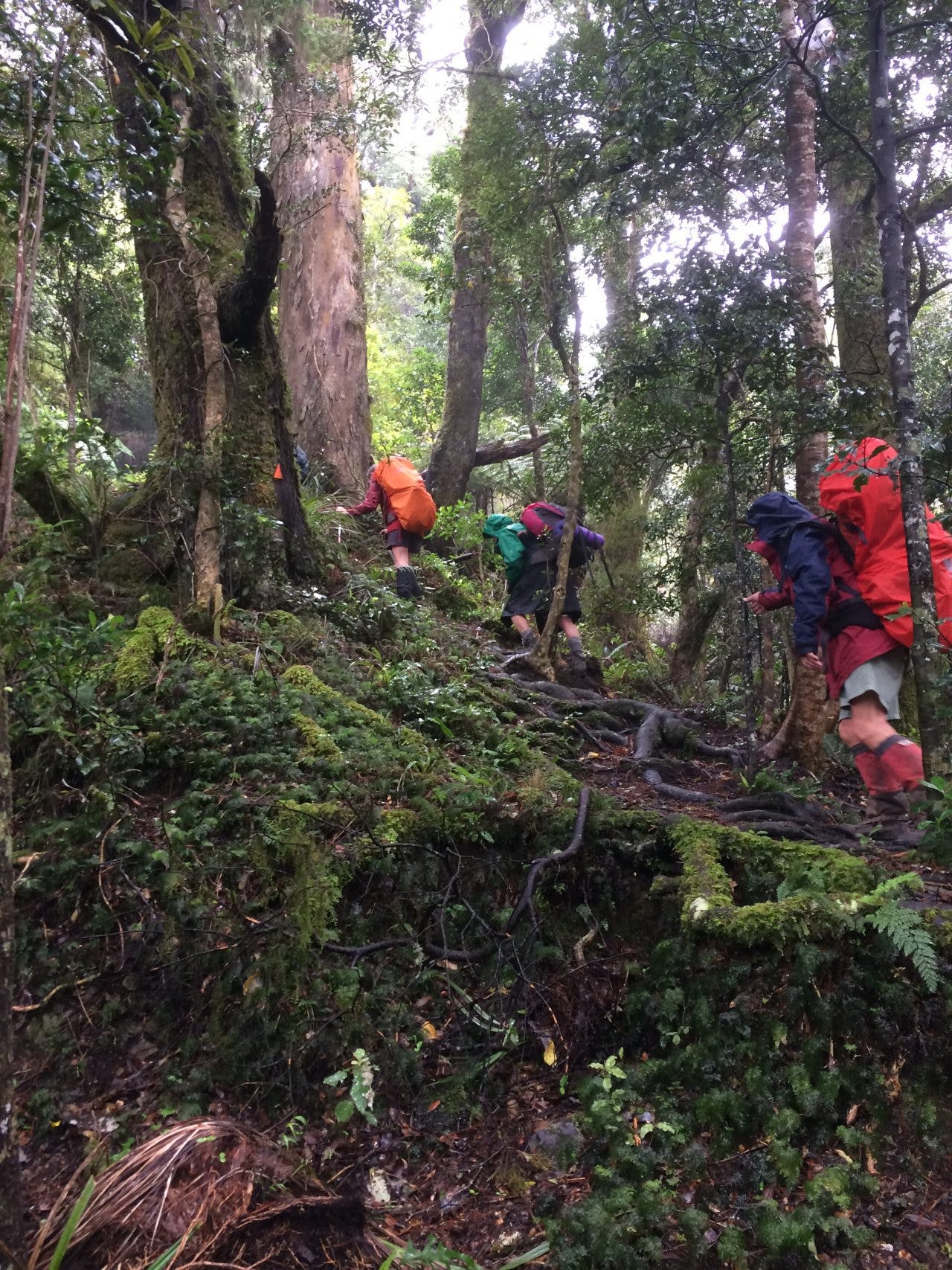 After close to five hours, a steep descent brought us to the river, a swingbridge and a sign pointing to the hut, five minutes away. The hut – as huts almost always are – was a welcome sight. It’s in a perfect setting in a large grassy clearing with a view of the river. We settled in, and thanks to a committed few who got the fire going, we had a cosy night and woke to dry clothes the next morning.

Returning the way we came, in clearer weather, we became aware of details we’d missed the previous day. The strong scent of kohuhu – a scent I’d like to bottle and take with me – tiny yellow star-like flowers of tarata and pink kotukutuku blooms on the track, and a small herb-like plant with tiny white flowers. A long tailed cuckoo shrieked in the distance. Shining cuckoos announced themselves triumphantly and grey warblers whistled on oblivious. Closer to the river, a flash of blue revealed a kingfisher darting away.

Back at the road, waiting in the sunshine for our shuttle to pick us up, we decided that, while the track was best described as ‘technical’, the cosy hut and the lush bush had made the wet scramble worthwhile.