Feeling I needed a quick and cheeky hut escape, I soon had my sights set on Sylvester Hut. The hut is just a two-hour easy walk from the car park and is nestled on the bushline in Kahurangi National Park. It’s actually an easy day-walk destination, but also makes for an excellent base from which to explore the surrounding tops and lakes. Passing the track entrance to nearby Asbestos Cottage, I finally arrived at the car park, which sits in shade most of the day and so was still dusted with snow from more than a week prior. On checking the intentions book at the track end, it looked like I’d have some company at the hut. The previous long weekend the hut had been overflowing. The early part of Sylvester Lakes Track was chilly with compacted snow and picturesque hoar frost decorating the bush. It begins as a 4WD track and there’s one 4WD-capable bridge over Galena Creek, but other than that there are no rivers or creeks to cross. The track zigzags up the hillside, climbing from 850m at the car park to 1320m at the hut on the bushline. [caption id="attachment_32528" align="aligncenter" width="1280"] 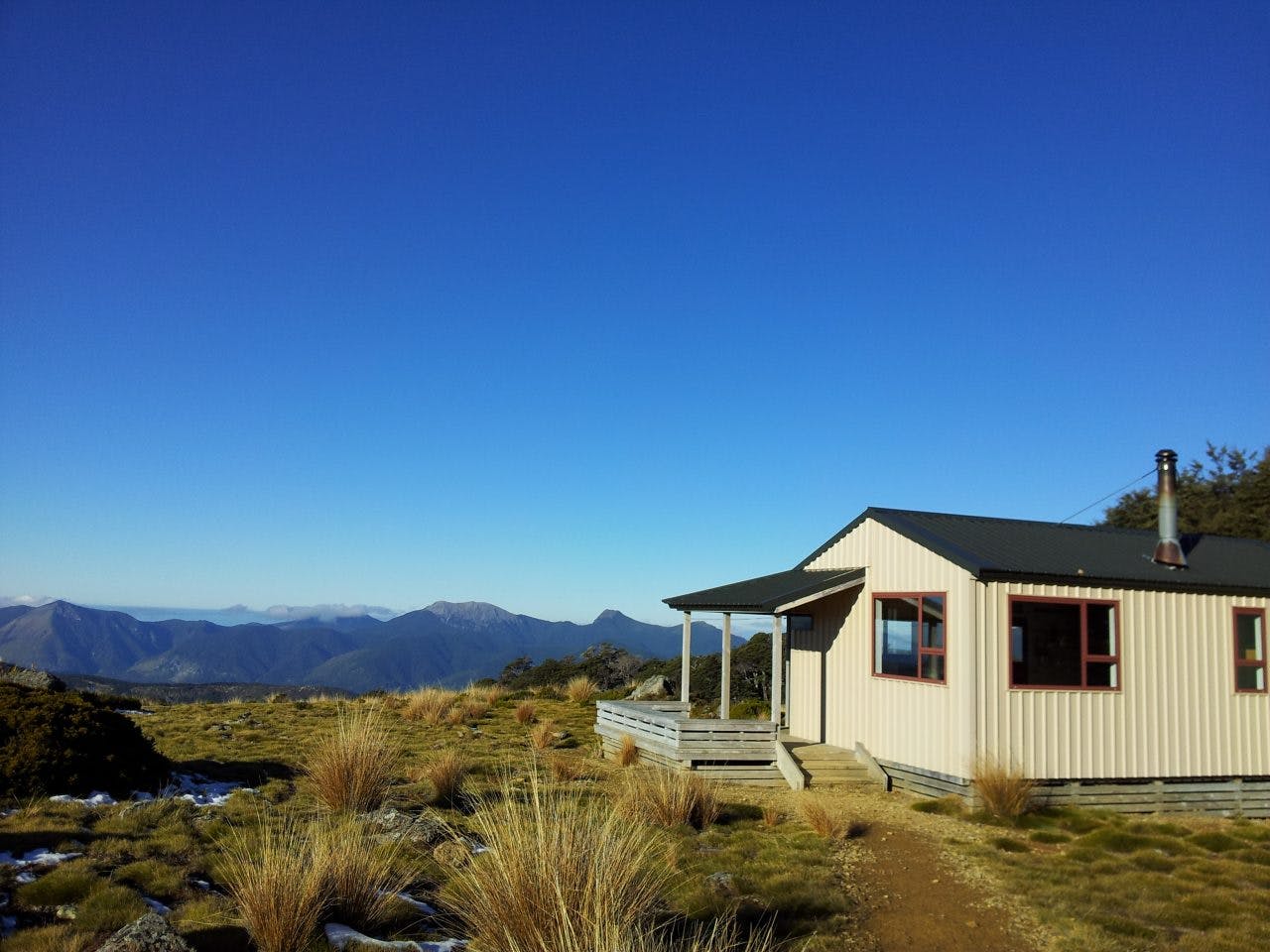 The 12-bunk Sylvester Hut is sited at the bushline and offers good views. Photo: Hazel Phillips[/caption] It’s a decent gradient, steep enough to get the lungs going but not so steep that it requires breaks to catch your breath. Setting a steady pace, I made good time and reached the hut in 90 minutes. Sylvester Hut is fairly new. It’s mouse-proof and has a Pioneer wood burner, which I fired up early on advice from others who said the hut becomes freezing once the sun goes down. My company at the hut was a French national now living locally. She was exploring at lake Sylvester, according to her note at the hut. It was too late in the day for me to explore the lakes, so I ate and occupied myself with the hut book. Multiple entries suggest that Mt Taranaki is visible from the hut (stand at the hut door and look to 10 o’clock).  I think I spied it, and possibly Mt Ruapehu, too, but equally it could have been wishful thinking. The hut does provide excellent views to Mt Campbell in the east and north to nearby Mt Lockett. It got me thinking about the possibility for a tops traverse from Sylvester Hut across Iron Hill (1695m) and Mt Benson (1662m), then joining up with the Waingaro Falls Track, which leads to Fenella Hut. Another leg would lead out through Cobb Valley, taking in Cobb Hut, the historic Tent Camp, and Chaffeys Hut along the way. Such a trip would offer the potential of many excellent tarns and lakes to camp beside. My return to the road end next morning was brief, taking just one hour.