Penn Creek Hut is a seldom-used and highly undervalued gem of a hut.

A dedicated team of Victoria University Tramping Club members give the hut a solid spruce-up from time to time, and also work on track maintenance in the area.

The hut is most easily accessed from Otaki Forks, via Field Hut. There is also a route, no longer marked on maps, that follows the Otaki River and then Penn Creek to lead directly to the hut.

Visiting Penn Creek in the middle of winter is somewhat of a tradition of mine, as there will usually be no other visitors there. It can become a cosy hideaway for a group, to sit by the fire and eat good food.

So, come the shortest day of winter, our group of five took off from Otaki Forks, up the well maintained track to Field Hut, arriving in around two hours. Field Hut was fully occupied, with some there wanting to travel further to Kime Hut, but the heavy snow above the bushline was acting as a deterrent.

The bushline is reached just above Field Hut and soon we were slowly plugging steps through the thigh-deep snow. The effort was worth it if only to see the Tararuas clad in snow drifts, with little sign of other people having walked this way.  All the same, we were glad we didn’t have to plug steps all the way to Kime Hut – the track to Penn Creek turned north about 500m beyond Table Top (1047m). 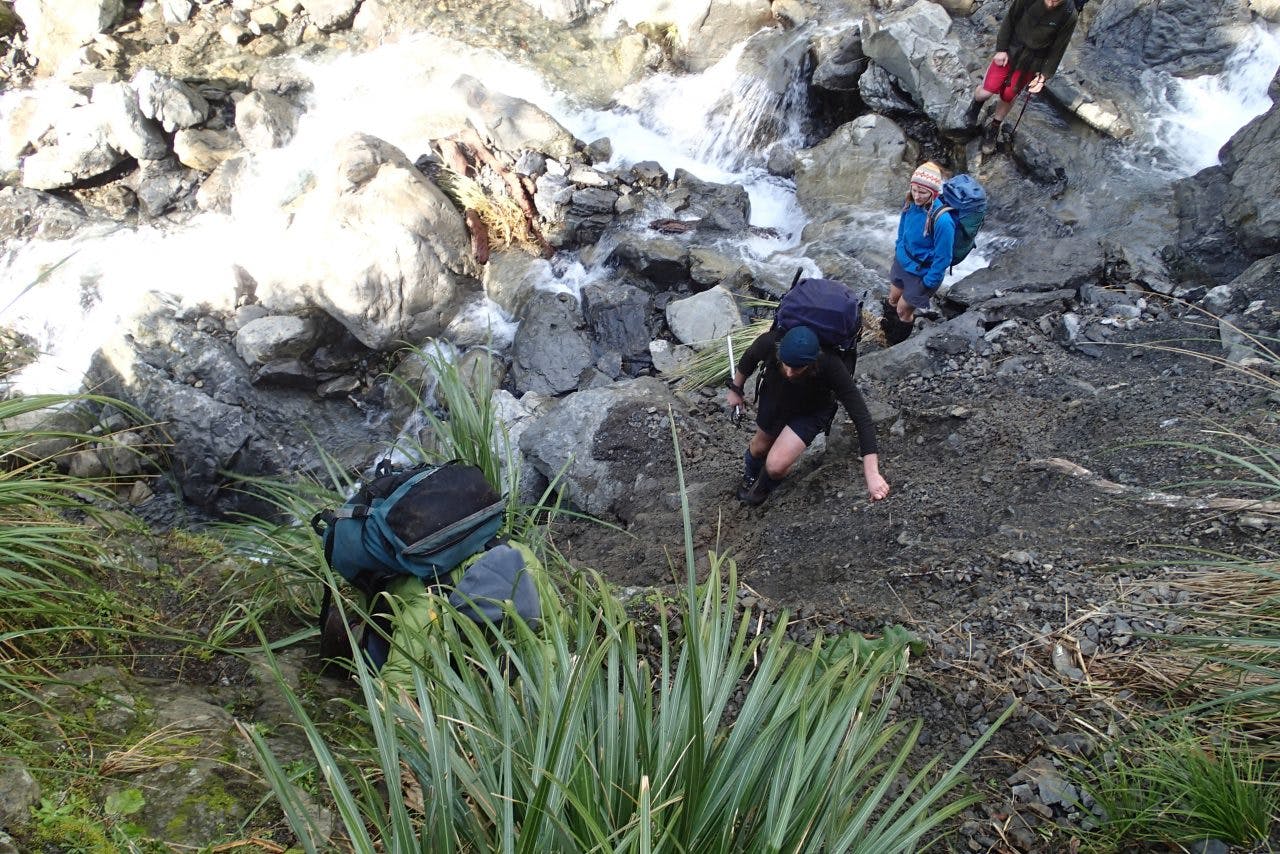 This track descends quickly and is often muddy and slick. On this occasion, the combination of mud and snow made travel even more slippery than usual, and we all had at least one tumble. The steep gradient means the descent is over reasonably quickly and before long, we had reached the creek and were following it to the hut.

Penn Creek Hut is commonly used by hunters and there are a number of dog kennels and a meat safe nearby.

Our first task was to get the fire going, which, given the dampness of the wood, was   not easy.  The nice thing about Penn Creek being close to the road end is that you can carry in a good amount of food. The midwinter’s night progressed from a large nacho dinner, accompanied by mulled wine, to a chocolate mousse dessert, after which it was definitely time to sleep.

The next day we chose to return to Otaki Forks along a re-established section of track down the river. This used to be a well-used route, but some slips had rendered it impassable for many years. The bones of the old track still exist, and with some supplejack cutting and the addition of track markers, the route is becoming better. However, the slips on the route are still active and the terrain is challenging. It’s advisable to start early just in case the river section is impassable and you need to retrace your steps past Field Hut.

The route descends Penn Creek to Otaki River, and then follows and sidles the river back to Otaki Forks.

The track weaves its way through the undergrowth, sometimes emerging by the river, and sometimes sidling along the steep river banks. We lost the trail several times.

At one point we used our ice axes to cut steps over an exposed slip. After this, it was relatively straightforward to Otaki Forks.