Over the hill and far away…

Just south of Bombay, the Mt William Walkway offers stunning views from some of the highest vantage points in the Auckland region. Being only 40 minutes drive from the CBD, it’s a great half day escape from the city.

On a misty July morning, I started the track from the McMillan Road end, the southern entrance to the track. After crossing a few fields, I soon reached the native bush of Mt William Scenic Reserve, home to kauri, hard beech and king ferns. This is where the climb starts, though there are steps and the gradient is manageable.

Coming out of the bush into open farmland dotted with sheep, the track steepens, and becomes considerably more slippery for the final section to the summit.

At 373m, Mt William is higher than both Mt Eden (196m) and Rangitoto (260m). The summit offers 360-degree panoramic views over southern Auckland and the Waikato, including the Kaimai Range, and Pokeno with its huge dairy factory.

The expansive views continue on the way down and then back up toward Puketutu (376m), home to another trig and an enormous telecommunications tower. You can be guaranteed of good mobile reception here.

You can also be guaranteed (subject to weather of course) of stunning views. I could see the Sky Tower and Rangitoto in the distance. It’s a great spot.

Rather than continue down to Puketutu Road I turned back and retraced my steps to McMillan Road end.

After finishing  the track, I saw the distinctive red of the Westpac rescue helicopter pass overhead. It was, I found later, on its way to Mt William to aid a woman who had slipped badly coming down the slope – the section I encountered just out of the bush, and that was particularly slippery.

Note that the track may be closed due to lambing between August and October. 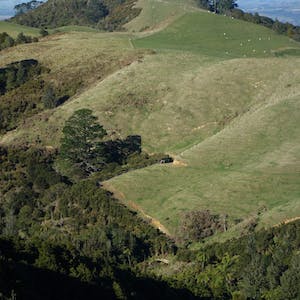 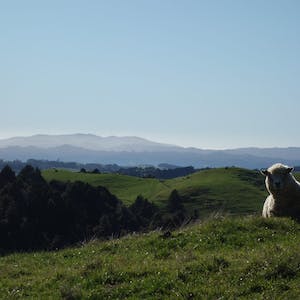