A walk full of high points…

It is easy to bypass towns when looking for a good walk, but this one starts just a few minutes’ drive from the centre of Whangarei and ends near the pretty town basin; it takes in waterfalls, kauri trees, farmland, native bush, mangrove boardwalks and stunning views of the city.

We started at Whangarei Falls, which cascade 26m to a pool just a short distance from the car park. There are viewing platforms on both sides but the best view is from the bottom and this is where the track heads off, following the riverbank. After about 30 minutes, having crossed the river by swingbridge and skirted a paddock, you reach the A.H Read Memorial Park.

The park became a reserve in 1889 and in 1956 was named after A.H Reed, famous for his walking exploits. Reed was also a lover of trees so it is appropriate that this area of bush contains a stand of kauri that is at least 500 years old. A boardwalk protects the tree roots and spans a gully, giving the effect of walking in the treetops. A signed side trip of a few minutes takes you to the Paranui Falls, almost as high as the Whangarei Falls and well worth a look. The main track leads to Reed Park’s entrance/exit and a small car park.

From here we turned right; the walk continues along Whareora Road (follow the signs with an eel symbol) and after about 10 minutes turn into Mair Park, following a track beside the Hatea River. This park was once part of the estate of local landowner Robert Mair, who gifted the land to the city in 1914. The river along this section is not tidal and the bush-clad hillsides are reflected in the still water.

Mt Parihaka (241m) is an eroded volcanic cone. There are two tracks leading up the bush-clad mountainside to the summit, the Dobbies and the Drummond. We turned up Dobbies Track, which winds its way up the hillside, sometimes steeply up sections with steps. The bush contains several quite large kauri close to the track and plenty of ponga, nikau and cabbage trees as well as rimu and totara. Beside the track, near the top, there is a pa site. Up here, with only fantails for company, it is hard to imagine that 2000 people lived on the mountain and that it was the site of a battle in the 1700s. Kumara pits and other evidence of habitation can be seen beside the track as it follows a ridge line to the summit.

Crowning the summit is a Second World War memorial. There is also a viewing platform providing wide views across the city to the Western Hills and down river towards the coast.

We descended Drummond Track, which is much steeper, and shorter, than Dobbies. There is another track from the summit: the Ross Track. This is not often used and includes a steep section of wooden staircase beside a waterfall and an old gold mine entrance (you need a torch). It runs down the south side of Mt Parihaka and ends a little further from the Town Basin.

The Drummond Track was named after another local benefactor, Norman Drummond, who donated 9.7ha of bush to the people of Whangarei in the 1940s.

At the junction with the Hatea River Track, we turned left and followed the river until it left Mair Park close to the Town Basin. The eel signs led us through a narrow alley, from one street to another lower down (Vale Road and Ewing Road). The final part of the track was a boardwalk through mangroves, which line the river here, and out to the pedestrian bridge at the Town Basin. 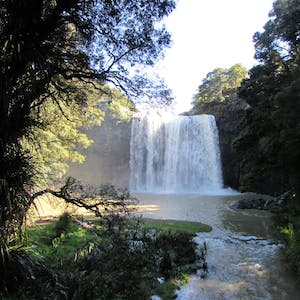 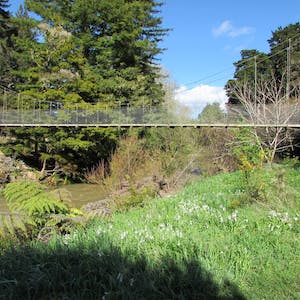 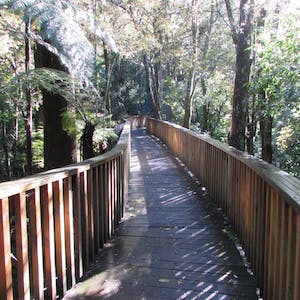 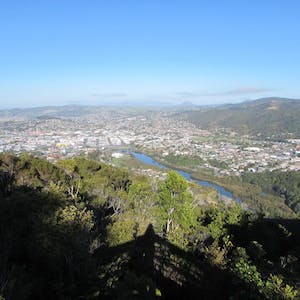