We’ve all seen it before. Winter arrives and your faithful tramping mates start going into hibernation. Guys who stood tall on mountain ridges, gritting their teeth through the wildest tempests summer could throw at them suddenly retreat to the comfort of the pub and the sofa, leaving behind a collection of half-baked excuses.

Usually it’s a few isolated individuals, but if enough people bail out on a trip simultaneously, then these sorts of grumblings can bring down entire expeditions. It is quite simply intolerable.

So in the interests of keeping Wilderness readers out in the wilderness this winter, we’ve put together some iron-clad rebuttals for your reluctant tramping buddies’ excuses to stay indoors this weekend. 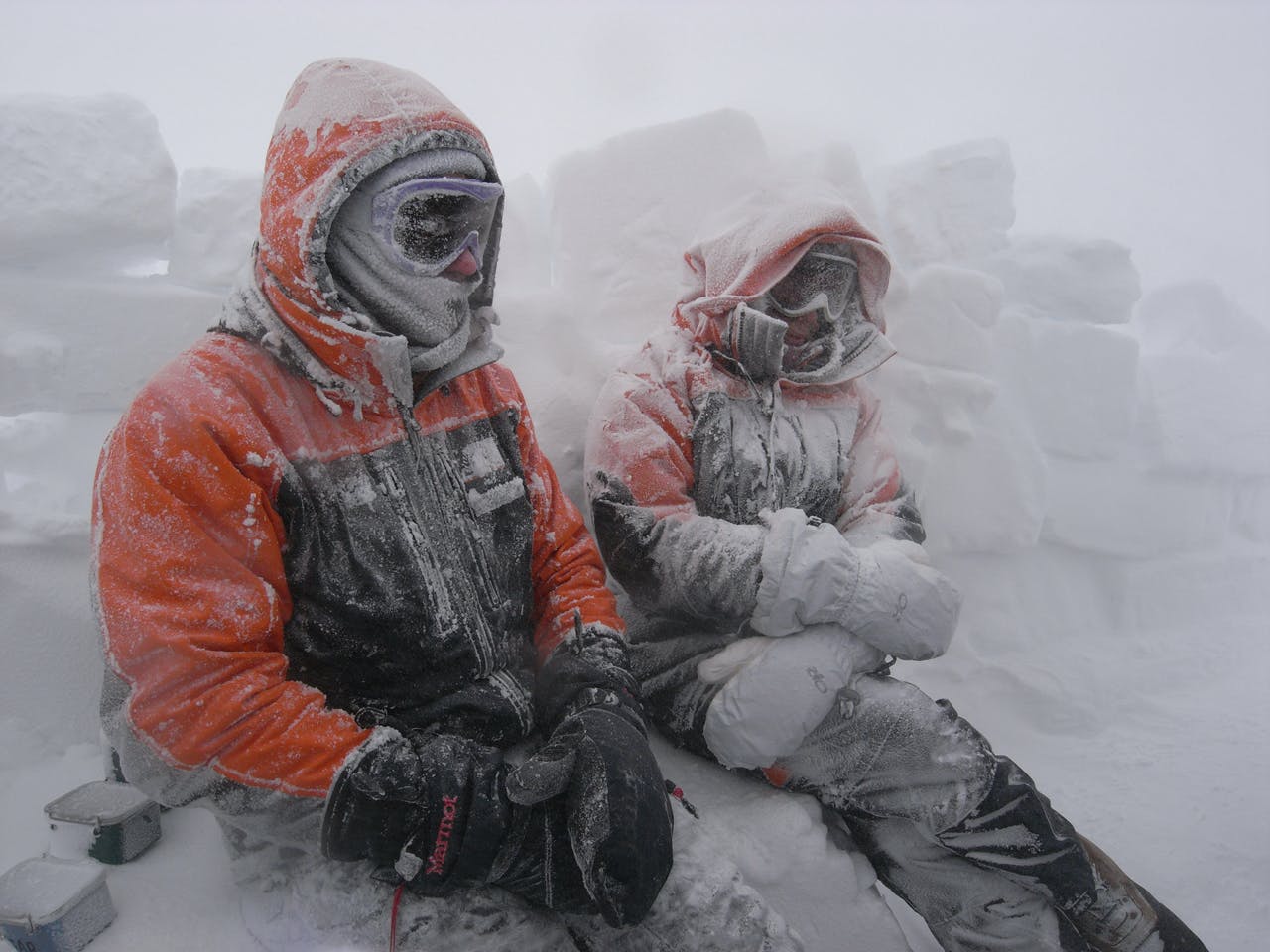 A Kiwi winter looks positively balmy in comparison to an Antarctic one. Photo: Antarctica Pictorial Collection

Answer: Okay, let’s put things in perspective. According to NIWA, the coldest temperature recorded in New Zealand last year was a brisk -10.2ºC at Manapouri – a record for the town. But in the grand scheme of things that’s nothing! To really find out about cold, you need to go a little further south – Scott Base, Antarctica for instance.

At Scott Base, the temperature plunges to a blistering -57ºC. Matt Vance from Antarctica New Zealand says at those temperatures the crew are effectively imprisoned indoors.

He says back in the ‘good’ old days people might have headed out into temperatures as low as -45ºC, but these days the organisation’s ‘Zero Harm’ principles and practical considerations keep staff out of the really cold stuff. “After -20ºC things get hard to do, add wind to the equation and they quickly get impossible,” he says, adding that in reality “-33ºC with no wind is probably as cold as anyone can work in modern times.”

It certainly makes chipping the ice off the lakeshore to fetch water on a chilly Manapouri morning seem not so bad after all.

Answer: If you’re struggling to get motivated to get out there during winter, there’s a good chance you might be suffering a mild case of seasonal affective disorder, also known by the very appropriate acronym SAD, and more commonly ‘the winter blues’.

Dr Stanley Mulvany, an Invercargill-based physician, kayaker and mountaineer says there are various theories as to the cause of seasonal affective disorder. “It may be due to a lack of serotonin… or alterations in the circadian secretion of melatonin…and perhaps aggravated by low vitamin D levels,” he suggests.

However the good news is he says it’s nothing to get depressed about: “There is very robust evidence that outdoor exercise on sunny days will relieve the symptoms of fatigue, low mood, foggy head, poor concentration and disorderly sleep.”

As it turns out, the notion that going for a walk is good for your sanity, as trampers have said for years, is actually solid medical advice too.

Excuse 3: It’s dangerous out there 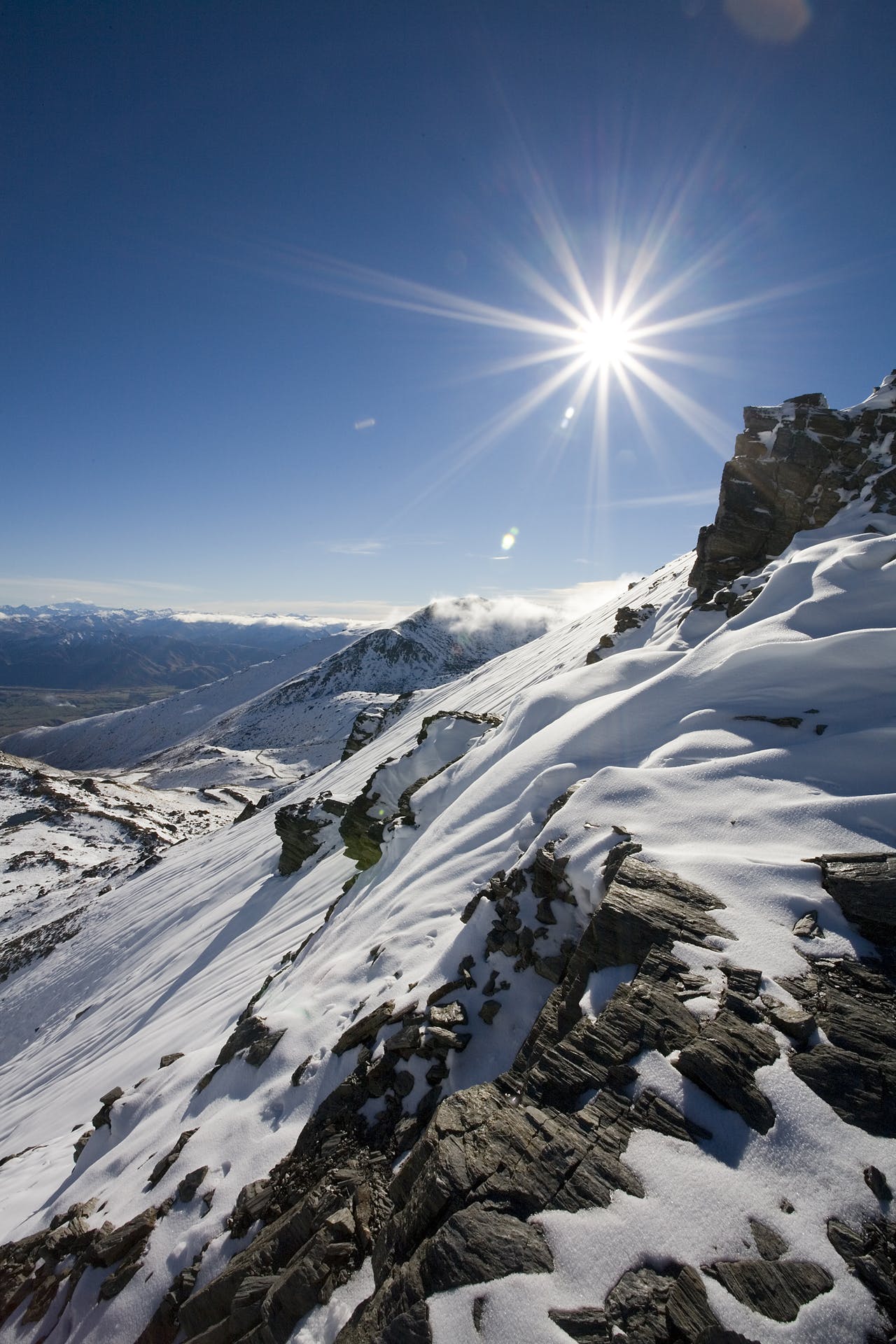 Winter isn’t any more dangerous than summer – it’s just a matter of learning a few new hazards to look out for. Photo: Mark Banham

Answer: According to Leonce Jones from the Mountain Safety Council, heading outdoors through winter needn’t be any more dangerous than in summer.

“You do have to do a bit more thinking and be a bit better prepared,” he says. That means following the Outdoor Safety Code and planning and preparing for your trip thoroughly. Check information sources like MetService and the Department of Conservation for weather and trail conditions, complete your outdoors intentions and take enough food and fuel to see you through if things don’t go to plan – and a personal locator beacon, just in case!

Excuse 4: What about avalanches?

Answer: Yes, avalanches are almost an excuse to stay home and watch the telly… but not quite.

MSC’s Jones says you definitely need to know whether your route is at risk from avalanches. He says in some circumstances you can actually be at risk without even being above the snowline. For instance in a U-shaped valley, you can be at risk while on the valley floor – from snow you can’t even see.

If you’re not sure if your route crosses avalanche paths, check with the Department of Conservation before you go – and if you do want to go into avalanche terrain, the Mountain Safety Council can teach you the skills (check them out at mountainsafety.org.nz) or check the backcountry avalanche advisory for information on the conditions right now at avalanche.net.nz

Excuse 5: It gets dark so early! 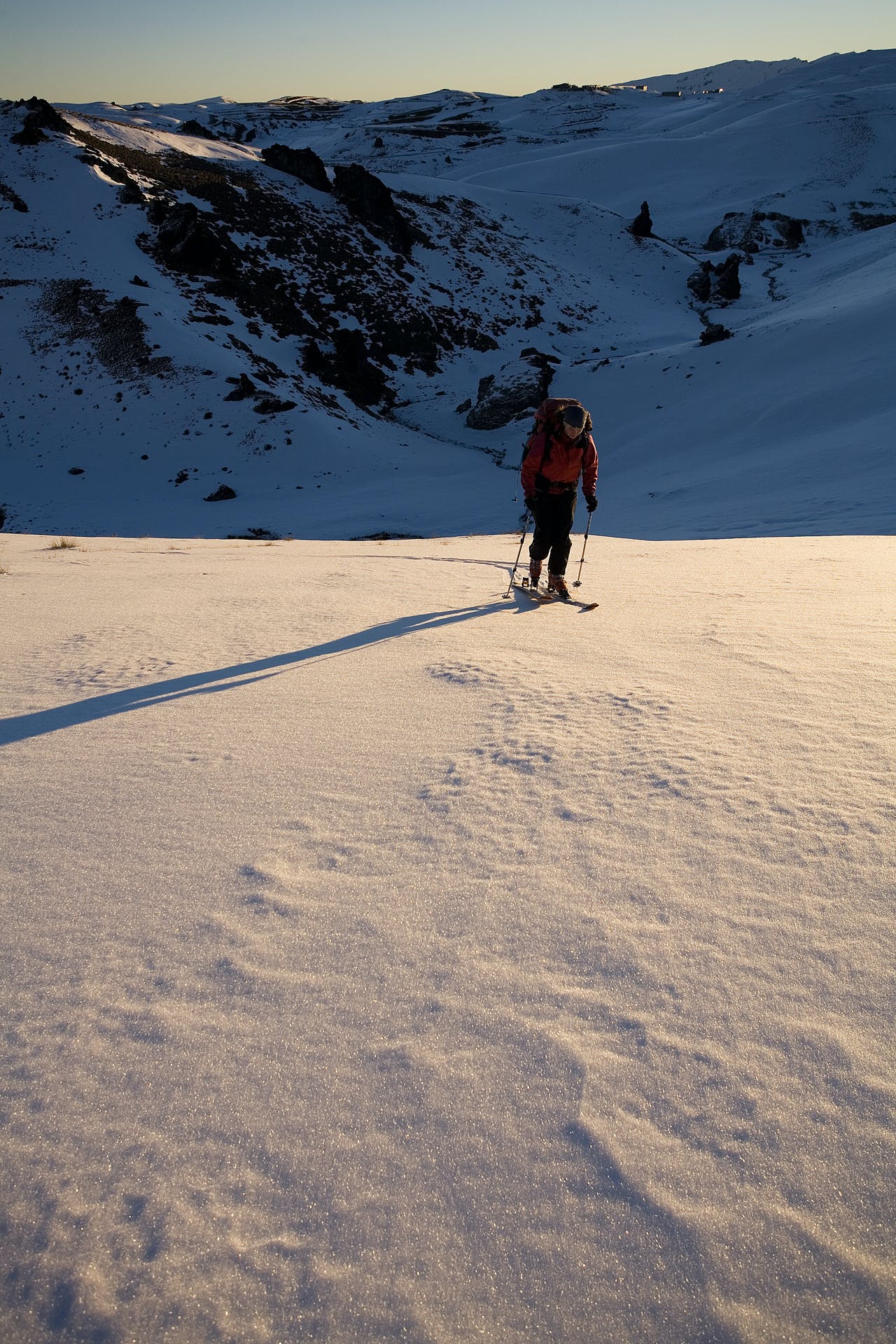 The shorter daylight hours in winter make life a bit trickier, but with a bit of preparation, it needn’t keep you away from the wilderness. Photo: Mark Banham

Answer: Despite what your kids might say, darkness itself is nothing to be afraid of. The problem is darkness has a way of making straightforward tasks like navigating and walking over broken ground rather more arduous than usual. But with the judicious application of a little technology, the wilderness can be your playground – even after the sun goes down.

In the last decade or so night-time friendly technologies like GPS navigation and LED illumination have progressed to the point where they’re impossible to ignore. For less than $300 – about what you’d spend on a few nights at the pub – you can buy a simple GPS unit that’ll allow you to navigate at night, and for under $100 you can get a headtorch that’ll light the trail for 30m ahead and last 120 hours on one set of batteries.

Now I’m not saying you should entrust these sort of gadgets with your life – there are a whole raft of philosophical and practical reasons why that’s a bad idea – but if a $300 gizmo is all that’s coming between you and your next grand adventure… then maybe it’s time to join the twenty-first century.

Excuse 6: The trails are all snowed over

Answer: It’s always summer somewhere in Godzone. The great thing about New Zealand is that it’s only a stone’s throw from the mountains to the sea – so you can change your playground’s climate virtually on a whim.

Winter is the perfect time of year to head for places like the Abel Tasman, the Heaphy Trail, the Queen Charlotte Track and the Rakiura Trail. Being out of season the huts are cheaper and less crowded, the weather is typically stable through ‘dry July’ and then there’s the really big advantage: there are drastically fewer bugs.

Excuse 7: I don’t have decent gear 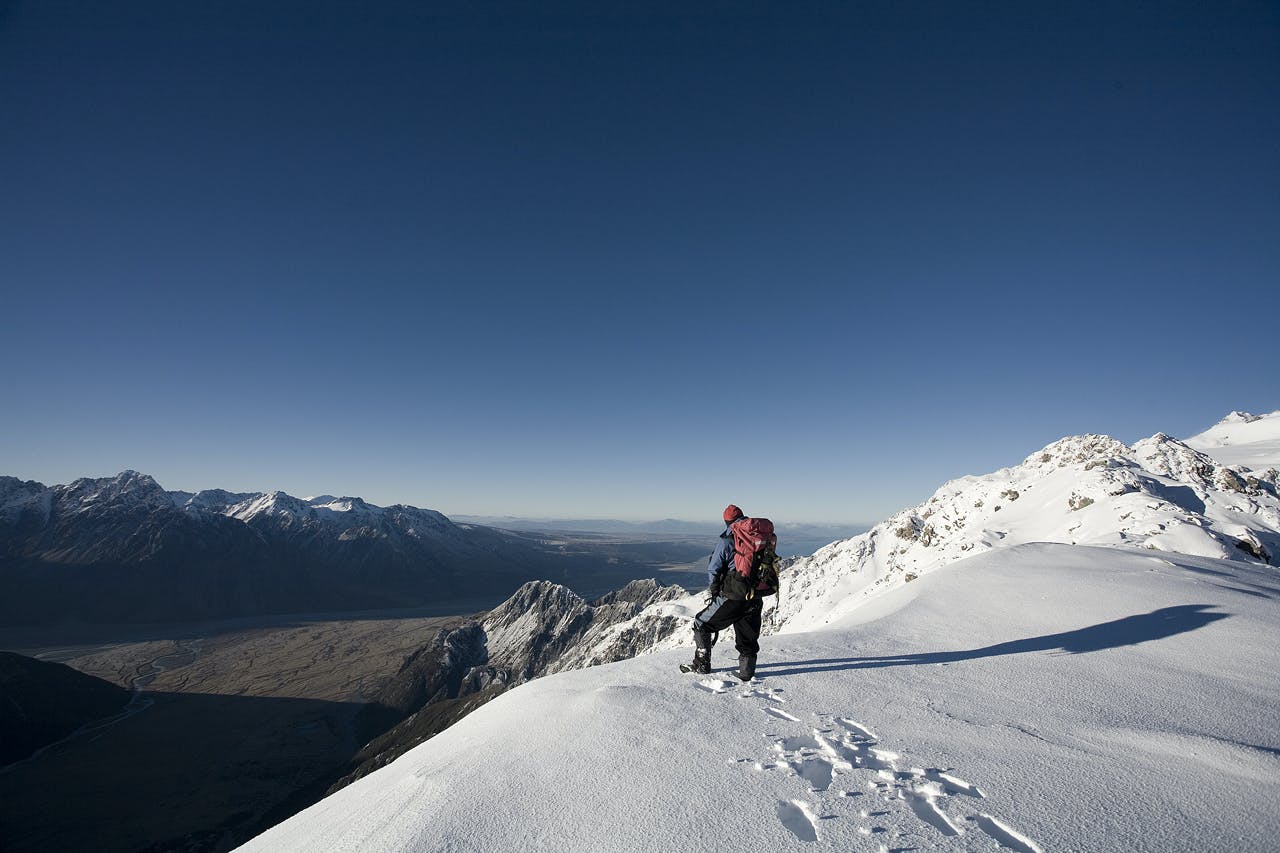 You don’t need the latest gear to go tramping in winter – be proud of the gear you’ve got! Photo: Mark Banham

Answer: Admunsen trekked to the South Pole wearing canvas and animal skins, Mallory and Irvine attempted Mt Everest in tweed jackets and silk thermals. Okay, admittedly Mallory and Irvine died, but my point is you don’t need the latest gear to have grand adventures. Sure you need to be safe, but trendy and safe are two very different things.

If you genuinely do need to go shopping, then your excuses are still fairly sparse. Today we have some truly incredible gear; waterproof breathable membranes, high-lofting down; and it’s cheaper and more easily available than ever. Plus there’s always Trademe if you decide ‘new’ it’s not really what you were after.

I guess the salient question here is: Do you really want the New Zealand bush to be the exclusive domain of the upwardly-mobile types kitted from head-to-toe in designer outdoor gear? I say no! Be proud of your fluorescent green and purple backpack and ancient tramping stove – they’re signs you’re a real Kiwi tramper. 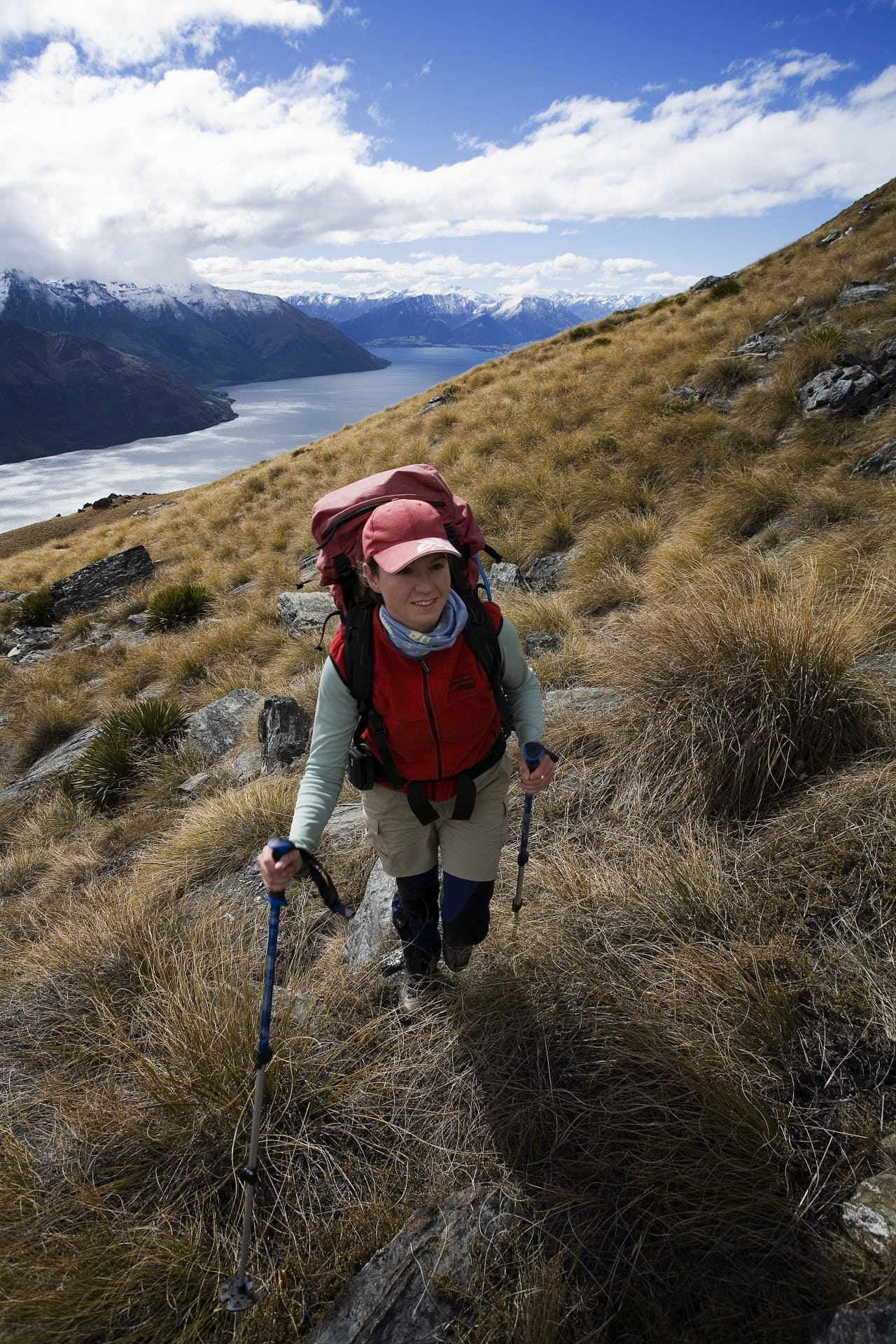 Staying active even though there’s snow on the hills will make all the difference when summer arrives and it’s time to do some big mission. Photo: Mark Banham

Answer: Yeah, and just imagine how unfit you’ll be when spring comes around if you don’t get out and do something now!

According to physiotherapist Louise Parker “you can gain muscle strength at one per cent per day given the right training, but you will loose it at 30 per cent a day if you completely stop that training.

“That’s why if you spend a week in bed with the flu you feel a bit weak afterwards – your muscles have literally wasted away.”

Parker says similar principles apply to just about every other measure of fitness. “Haemoglobin levels, V02 max, temperature regulation, you name it; if you stop exercising you lose it – fast.”

In other words, the best way to get fit for next summer is to stay fit this winter.