The swarm of introduced predators munching New Zealand’s native flora and fauna have inadvertently spawned what could be the country’s most patriotic form of outdoor recreation. Josh Gale talks with two volunteers who tramp off-track to dispatch pests, but also for the love of it

One morning Jenny Waite was tracking kokako through dense bush in Auckland’s Waitakere Ranges when she saw a tui swooping violently.

“It looked quite angry and then I saw it was attacking a stoat,” says the tall 23-year-old scientist. “Tuis are quite feisty birds, but kokakos are mellower and get munched when they’re nesting.

“If it wasn’t for projects like Ark in the Park there’s no way kokako would survive out here.”

Waite volunteers for Ark in the Park, an open sanctuary managed by Forest and Bird with the help of Auckland Council in the Cascades Kauri area of the Waitakere Ranges Regional Park.

The kokako, sometimes called the blue wattled crow, was gracing the Waitakere Ranges until the 1950s when predators made them locally extinct.

Now there are only about 750 pairs of kokako in the North Island, but DOC aims to boost this to 1000 breeding pairs by 2020.

Predator control began in Ark in the Park in 2003 and since then whiteheads, North Island robins, hihi as well as kokako have been reintroduced.

After arriving, however, the kokako made its territory outside the park to be closer to more food sources. To ensure their survival, the park was expanded, taking the total area covered by Ark in the Park to 2000ha, and new bait and trap lines were installed.

Waite knows exactly where to find the rare and elusive grey bird with blue tear drops next to its beak. To pinpoint them she can whistle a tune so they respond with their own flute-like call.

Whistling ability isn’t a skill required to be a bird monitor, though. Volunteers use CD players and speakers to play kokako call to draw them out. The only skills needed are basic navigation and the ability to bash your way through dense kiekie groves to pursue the bird which is famed for its squirrel-like antics.

Waite has obviously crawled, crashed and collapsed through gnarly bush for some time now. Her top-of-the-line German-made Lowa boots are kaput, her shirt shredded and trousers equally tatty. But she doesn’t care; chasing kokako isn’t a chore she does grudgingly.

“For me this is basically tramping with a purpose,” Waite says. “I get to see some stunning areas of bush few other people ever get to see.

“I’m a lot more observant when I’m tramping now – I notice different plants and animals I probably wouldn’t have noticed before I started volunteering here.

“I’m also not in so much of a rush anymore, I’m just happy to wander through the bush to see things.” 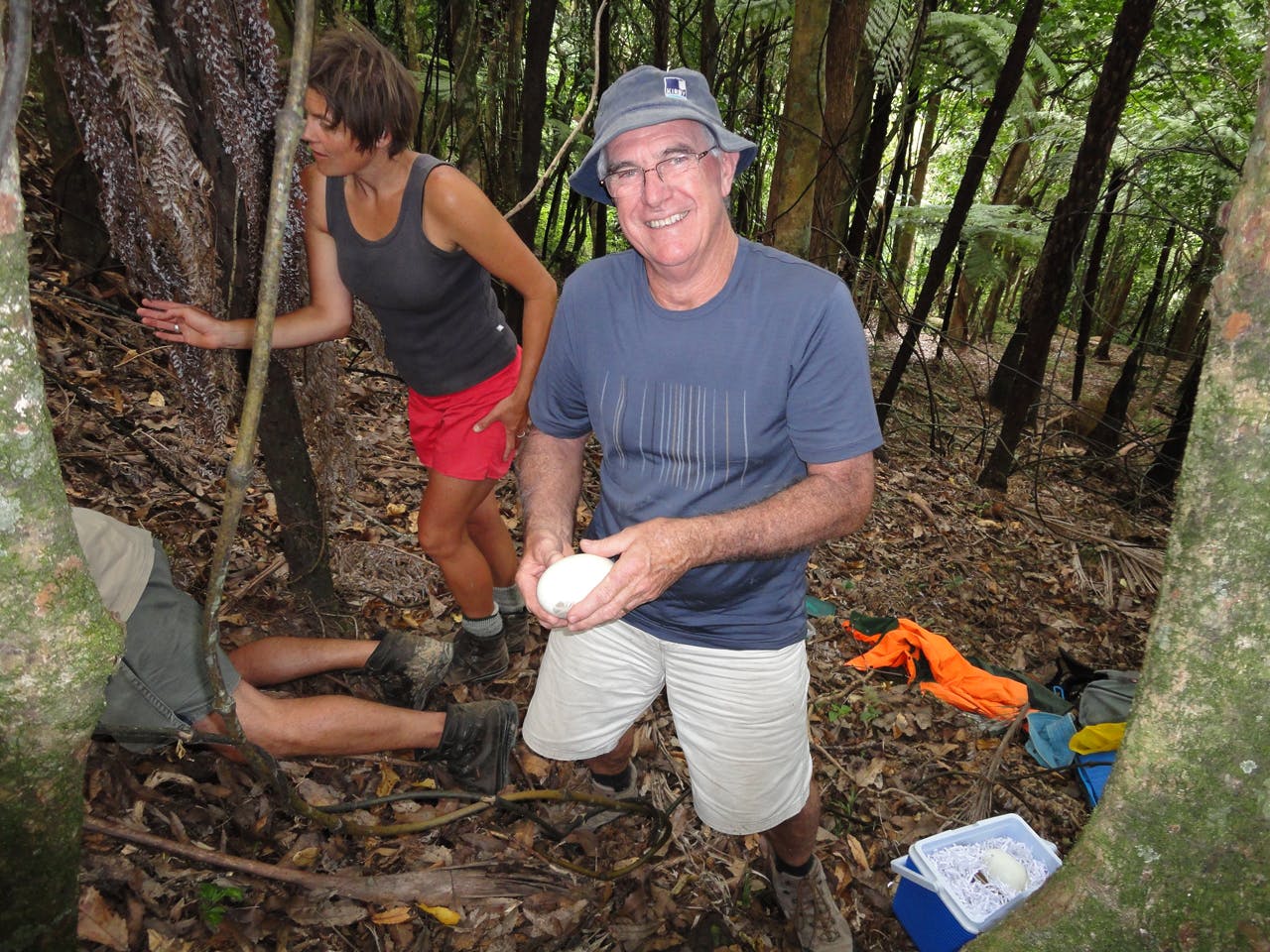 Steep sided ridges with big views over the ranges, secret swimming holes surrounded by bush and watching the sometimes “bizarre behaviour” of the kokako more than make up for all the scratches and bruises Waite gets.

“One of the best moments is when you get five or six kokako hanging out in one tree,” she says.

Last year, Waite completed a Masters in biosecurity and conservation and, unlike many scientific minds of a similar age, she has no intention of leaving New Zealand.

For her, the fight to save native species from the jaws and claws of introduced predators is too important to turn her back on.

“There’s nowhere else in the world that has what we have here,” she says. “I want to stay in conservation to make a difference.”

Waite is one of hundreds of Ark in the Park volunteers working hard to return the dawn chorus to the area.

While bird watching sounds like an idyllic way to spend a Sunday afternoon, much of these volunteering tasks involve hard graft and sometimes hazardous work.

“I’m lucky because I’m young,” Waite says. “When I fall I just bounce back up, whereas some of the older volunteers find it harder to.”

In fact, the majority of the volunteers at Ark in the Park and other conservation projects around the country aren’t young people like Waite. She is in the minority.

Most are older semi-retired or retired Kiwis with time to spare and who want to give something back to the land that’s nourished them.

Rather than reinforcing the stereotype of the weak and fragile elderly, these people disprove it by cheerfully doing work many people a third of their age would baulk at. That’s not to say that older bods don’t get injured, however.

Up in Whangarei, conservation volunteer 69-year-old Max Hutchings was sidling along a slip in Pukenui Forest when it caved in, taking him with it and tearing three tendons in his right shoulder.

Hutchings has just had reconstructive surgery on the shoulder and his tendons have been stapled back in place, but as far as he’s concerned the show must go on.

“I still do everything I did before, but I just have to do it left-handed,” says the ex-farmer, deerstalker and New Zealand Territorial’s soldier.

Talking to Hutchings one feels the attitude of New Zealand’s early settlers echoing through the generations. He’s one tough bushman.

Righting the wrong of introduced predators is something that just needs doing, no matter how rough is the country it needs doing in.

But like Auckland’s Jenny Waite, Hutchings doesn’t see it as a chore. For him, it’s something to look forward to.

“We live in a pretty special country and when you get to our age you realise there’s a hell of a lot to be thankful for and it’s not difficult to give a bit back.

“This is one way we can do it and at the same time do something we enjoy.”

Sometimes Hutchings will be given an easy block of land to set traps in while at others, it’s steep, grovelling country. “I seem to have drawn the short straw this week,” he says. “Both the sections I did were really steep. It’s what we call four wheel drive, on your hands and feet scrambling. It’s hard work.” 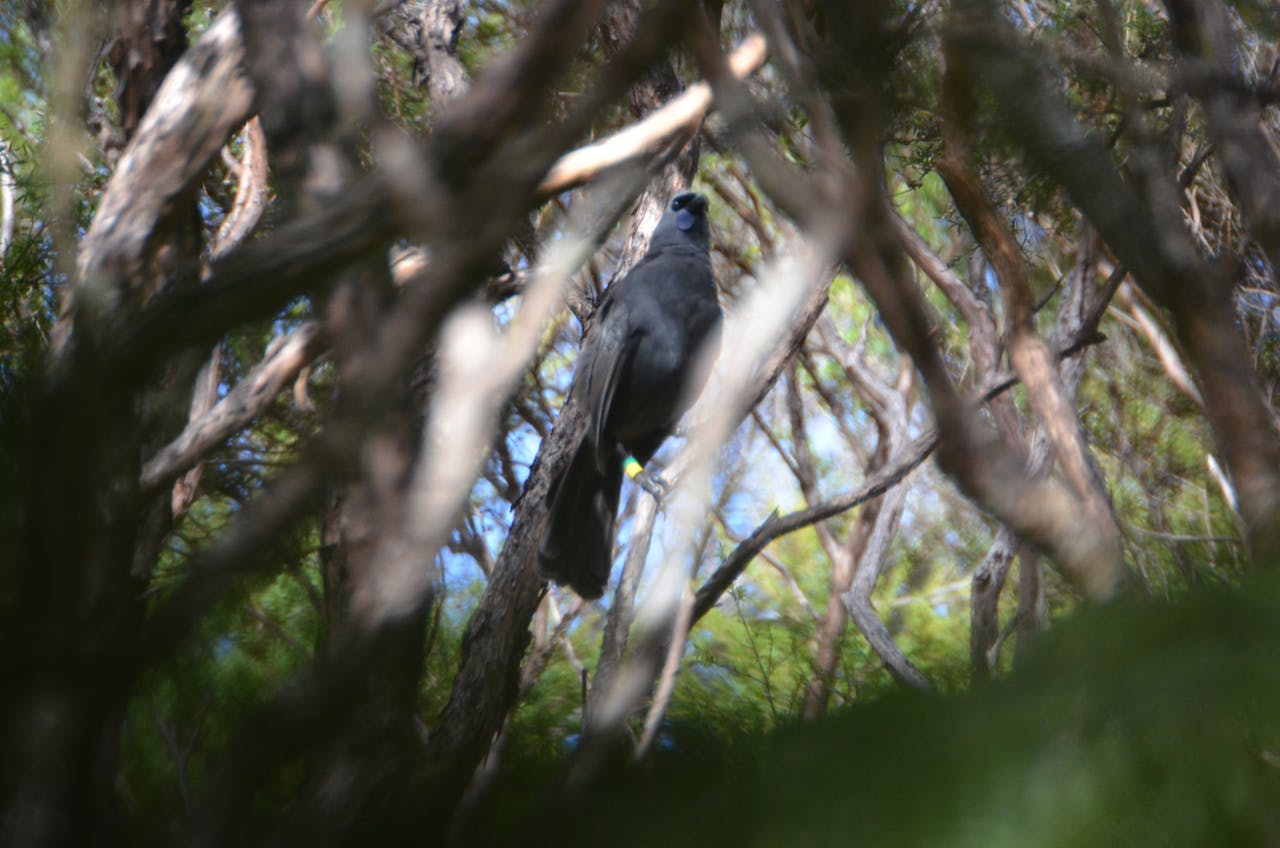 Volunteers keen to help control mammalian pests to go off track to look for birds like kokako and to check stoat, rat and possum traps

Pukenui Forest, or Western Hills, referred to as the lungs of Whangarei, lies west of the Northland city.

The forest comprises some 2000ha of public land administered by DOC and Whangarei District Council in conjunction with local iwi, land owners and recreation groups such as Whangarei Tramping Club.

Kiwi once lived in the forest, but due to predation none remain.

Pests also gutted the forest’s kereru and tui populations and by 2009 just a handful of birds were left.

The Pukenui Western Hills Forest Trust was formed in 2008 to create a volunteer effort to restore the forest. Its long term goal is to reintroduce kiwi, but only if it can first deal with the plague of rats infesting the forest.

Trust volunteers began predator control in 2009 and have installed 75 10kg stoat traps and 220 possum bait stations over the last 12 months.

Stoats, possums and rats have had their numbers reduced to five per cent of what they were before the work began.

The trust also zoned a smaller, intensively predator-controlled 260ha area with stations 100m apart positioned on lines also 100m apart. The total trap line is 36km. On top of that, volunteers look after five 10km stoat lines in the rest of the forest.

Working so intensively in the forest has helped volunteers like Hutchings discover places and trees that those who stick to the tracks will never get to see. “The most surprising thing about the forest is the diversity of the larger trees,” Hutchings says. “I was in a grove of 30 to 40 kauri the other day that I hadn’t seen before and they all would have been two to three metres in circumference.

Pukenui Forest, full of deep gorges and rocky streams, only remains because it was too rugged to be farmed. Walking off-track through the bush for seven to eight hours at a time is not for the work-shy.

“Because a lot of us now are going in on our own and we don’t have cell phone coverage, we’ve been discussing taking PLBs,” Hutchings says. “We’ve already had people take a couple of falls. We don’t want to lose anybody.”

Despite the physicality of the job, Hutchings says none of the volunteers would do the work unless they enjoyed it.

“As you get older you need to continue to exercise otherwise the old body wants to shut down,” he says. “One of our guys has really bad rheumatism, I’ve got high blood pressure, another guy has a crook heart. We all have our own problems, but we keep fit and keep our brains active by working in the forest – it’s good for our wellbeing.”

Their work is also exceptionally good for the wellbeing of the forest. With the removal of possums and this year’s wet weather, Hutchings says the undergrowth is already bouncing back and more tuis have been seen.

It’s a familiar scene being played out all over the country: volunteers donating their time and energy from Northland to Stewart Island to give native birds a fighting chance to survive the tide of the menacing marsupials.