As my second cup of breakfast tea brewed, I leaned back on the mossy rock and took in the view again.

The unnamed peaks and snowy cols of the Ailsa Mountains stood proud and dramatic in the morning light. A kaka called as it swooped over the forest below and not a single man-made sound could be heard. My camping spot was also unnamed and wonderfully free of any human signs. I intended to leave it that way. On an outcrop of rock and tarns above the Caples Valley, the whole world seemed to pause. This was better than I’d dared to hope for when, weeks earlier, I’d scoured maps and guide books for a suitable get-away in the Mount Aspiring region. The journey had been memorable.

Hankering for a subalpine spot with a view, I’d noticed a fascinating valley on the map not described in Moir’s Guide North. When an online search threw up only one trip report (by an Otago Tramping and Mountaineering Club party), I was hooked. The untracked West Branch of Steele Creek splinters from the more accessible Steele Creek Track on its way between the well-trodden Greenstone and Caples Valleys. The OTMC report was of a winter crossing to the Caples and added a tantalising description of a subalpine rock garden to the already alluring promise of a disappearing stream, two lakes and an easy retreat should I need to double-back.

Wanting to savour and explore the area, I plumped for the alternative approach to Greenstone Hut, via the shores of Lake Wakatipu and along old forest bridal tracks, and stopped for an early lunch at the picturesque Lake Rere.

As the next day’s rain eased to drizzle I made a late start along the Greenstone River, dodging cows and cow pats, then venturing up through beech forest and windfall beside Steele Creek itself.  Two deer barked their alarm as I reached Steele Creek Hut at the edge of the river flats. The hut is an old-style, drafty but characterful three-bunk affair with dirt floor and rough pole construction. Two young German girls I passed earlier in the day had stayed there the previous night and were bewitched by its charms and that of the track, which, to them, felt “like proper New Zealand tramping”. I couldn’t have agreed more and was glad to have left the cattle behind.

The deer were back as I set off up-river the next morning, the trail becoming patchy in places but soon deviating from the main track. After crossing a slip I clambered over dark mossy boulders to a bright green lake at the bushline. Such twinkling and clear waters begged for underwater exploration and I would have gladly sold my sleeping mat for a snorkel to delve beneath the surface. Though not named on the map, the lake is referred to as Lake Pouna, according to the ranger at Greenstone Hut – a reference to its startling green colour. He had not ventured further up the valley and here, as the ground trail ran out, I made my own way.

Ambling around the western shore of the lake, the head of the valley seemed tantalisingly close but dense scrub on the valley floor, and leg-trapping boulders on the flanks, meant there would be no quick access to the upper basin. Despite the heat, I finally swapped my shorts for something longer and pushed along through the scrub, wading occasional small streams to reach the higher ground. Several small aeroplanes passed overhead, disturbing the sense of peace and isolation. At the wide upper basin, grassy flats provided excellent camping, though the sandflies were numerous. Here, the stream, which fell from an alpine lake I planned to reach the next day, disappeared underground before re-emerging a few hundred metres down-valley. 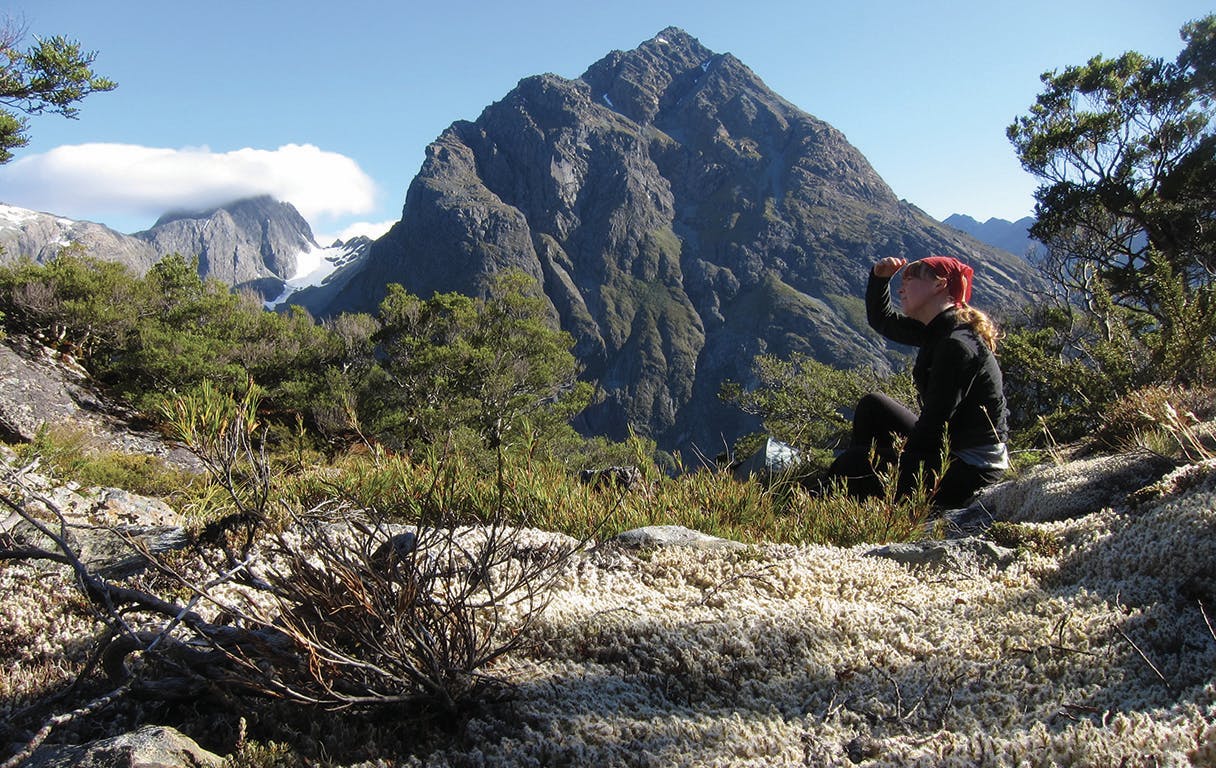 A tranquil camping spot at the unnamed rock garden with a view towards the Ailsa Mountains. Photo: Lauren Schaer

After a surprisingly cold night I waited for my boots to defrost while the valley floor filled with thousands of busy moths; I had plenty of time to assess the route to the waterfall and hidden lake. With no guide book to refer to, and the OTMC report suggesting use of rope, I was ready to turn back if things became too tricky. However, the true left of the waterfall provided easy access, confirmed by a small cairn – the only one I’d seen in the valley – perched on a rock above the bluish-green outlet waters.

The upper lake was crystal clear and the rock walls, including the eastern side of Jean Batten Peak, provided a grand backdrop. To my delight, I heard a rock wren nearby and a pair of paradise ducks created the only ripples on the water. This was heaven. An hour passed as I ate lunch and enjoyed the serene spot, watching the plucky rock wren get closer to appraise me, while its mate could be heard further along the shore. With no wind and clear blue skies, the saddle route to the Caples Valley looked achievable, so I reluctantly packed my things and left the blissful spot, sidling the eastern edge of the lake.

A hare looked down on me as I began to climb up the scree and along a rocky outcrop, and a white-striped giant alpine speargrass weevil basked in the sun as I huffed and puffed up the slope. The views back down the valley were impressive but, as I crossed the wide saddle, the panorama of the Ailsa Mountains to the north and the Darrans peeking out to the north-west took my breath away. I’d been so lucky to have clear weather and to have this beautiful national park as my playground. So far, so good.

Dropping through tussock by a pretty stream and more waterfalls, I heard a whistle and looked around, expecting to see a hunter. No-one was there. A few minutes later the sound came again and this time I saw the whistler: a chamois looked up at me from a rocky hump below, obviously disturbed by the unusual visitor. It bounded downhill and out of sight but once more whistled as I caught up, this time performing leaps my stomach churned to watch, its hooves perfectly adapted to grip the terrain and absorb shock.

Out to the north-east I could now see the bare patch in the forest at Pt1084, described by the OTMC party as a rock garden. The sidle over scrub to get there looked simple but was punishing in the heat; perhaps the stunted beech and gullies below would have made easier travel, but I preferred to stay high and did eventually descend through the bush to the open patch.

The rock garden was a maze of tarns, mossy bog plants and subalpine scrub with stunning views all around. In the late light it was beautiful and quite the antidote to the slow scrambling journey I’d made to get there. I walked on the rock as much as possible to preserve the tiny plants and found a small clearing for my one person tent. Kea and ruru called as rosy light draped the mountains and night fell.

If my panic date had been later I could have happily stayed a day at the rock garden, but instead settled for a cruisey morning: sipping tea, absorbing the views across the valley and investigating the strange tarn life such as the insectivorous alpine sundew. Such a place I was sure Moir’s Guide would describe as ‘special’, had its editors included it. I felt privileged to be there, just two kilometres from the Caples Track, but a world apart.

A short bush-bash led me down to the Caples, passing workers as they took a break between dynamiting new sections. The tunnel formed by the widened path made me feel totally separate from the forest, and the hard track underfoot wore at my soles. I met some who raved about how much easier the Caples Track would be, with “all that gnarly uphill stuff” taken away. I kept my mouth shut, but felt a sadness. The Caples had been one of my first forays into “real New Zealand tramping” years before, and I had fond memories of that gnarly bit and the sense of achievement completing it had given me. The Caples Track is now said to form an easier finish for those wishing to return on foot after completing the Routeburn Great Walk. However, it would take less time and effort to walk back via the Greenstone Valley, so I find the logic questionable.

With sore feet I hobbled down the last stretch of the Caples Valley. Though the new track had dampened my mood, I reflected with satisfaction on a successful trip, and marvelled at how not-in-the-guide-book routes, with such rich rewards, could still be found so close to popular tracks.