Access
The Wangapeka Track can be accessed from Wangapeka Rd, South of Karamea.

Gerald Cover was a hermit and the place he chose to escape the hurly-burly was the  in Kahurangi National Park. Towards the end of last century he set up camp to wait for the end of the world, which he thought was due in 2011.

Cover didn’t spend every day in the mountains waiting for doomsday – he was once interviewed by Paul Holmes about the difficulties he was having in finding a wife – and when he died, tragically, it was on the road to Karamea. With remarkable persistence, however, for more than 10 years he made his home in this curious landscape where the earth is paused in the act of jumping towards the sky.

We had planned our trip to Cover’s old stomping ground, the Herbert Range and the Garibaldi Plateau, as a crossing of Kahurangi National Park. Starting from the Wangapeka Track in the west and finishing at Flora Saddle car park in the east. At both ends we would be tramping in comfortable country with huts and tracks and the occasional view of farms and cars. In the middle we would graze the Tasman Wilderness Area where, in the direct words of the Conservation Act, ‘no roads, tracks, or trails shall be constructed’.

To get inland we had two long days tramping through the wasp-infested jungle behind Bell Town Mananui Hut, over Lawrence Saddle and across mellow-yellow Bellbird Stream. We left semi-civilisation beside the smoky fire at Kakapo Hut, where the chocolate biscuits also ran out and climbed to the mirror-ball tarns of Twenty Four Tarn basin.

At our campsite under the hissing, whistling beech trees in the headwaters of Saturn Creek the bad weather began to move in. In the morning we continued along Herbert Range in a shroud and made it an early night on a squelchy knot of tussock above Silvermine Creek.

The next day the big tap in the sky was left on. The monumental cliffs on the flanks of the Garibaldi Plateau were directly across the valley but the only sign they were there was the noise from the water running off. We decided the best thing for it was to lie flat in our tents growing tummy lint. Occasionally we would call out to each other “You still dry?”And then all sound would be rain.

Beyond our campsite, the Herbert Range thins out and in places is very difficult to traverse. Gerald Cover went along this route often and put up ropes to help in the tricky sections. At the northern end of the range, which is flat like a block, he built a huge antenna. Strung in Christmas-day fashion across the campsite was our own aerial to the outside world. As Quentin tried to cook dinner without endangering his down cocoon, the crackle of the mountain radio grew suspiciously loud.

“Roger Bob, sounds like we’ll be spending another night up here on the Plateau.”

“Having some trouble copying you 45, was that another night on debut?”

“Negative, negative, on the plateau. The Garibaldi plateau, over.”

“Ah, the Munroe, I remember that valley well, has that rain reached you there?” 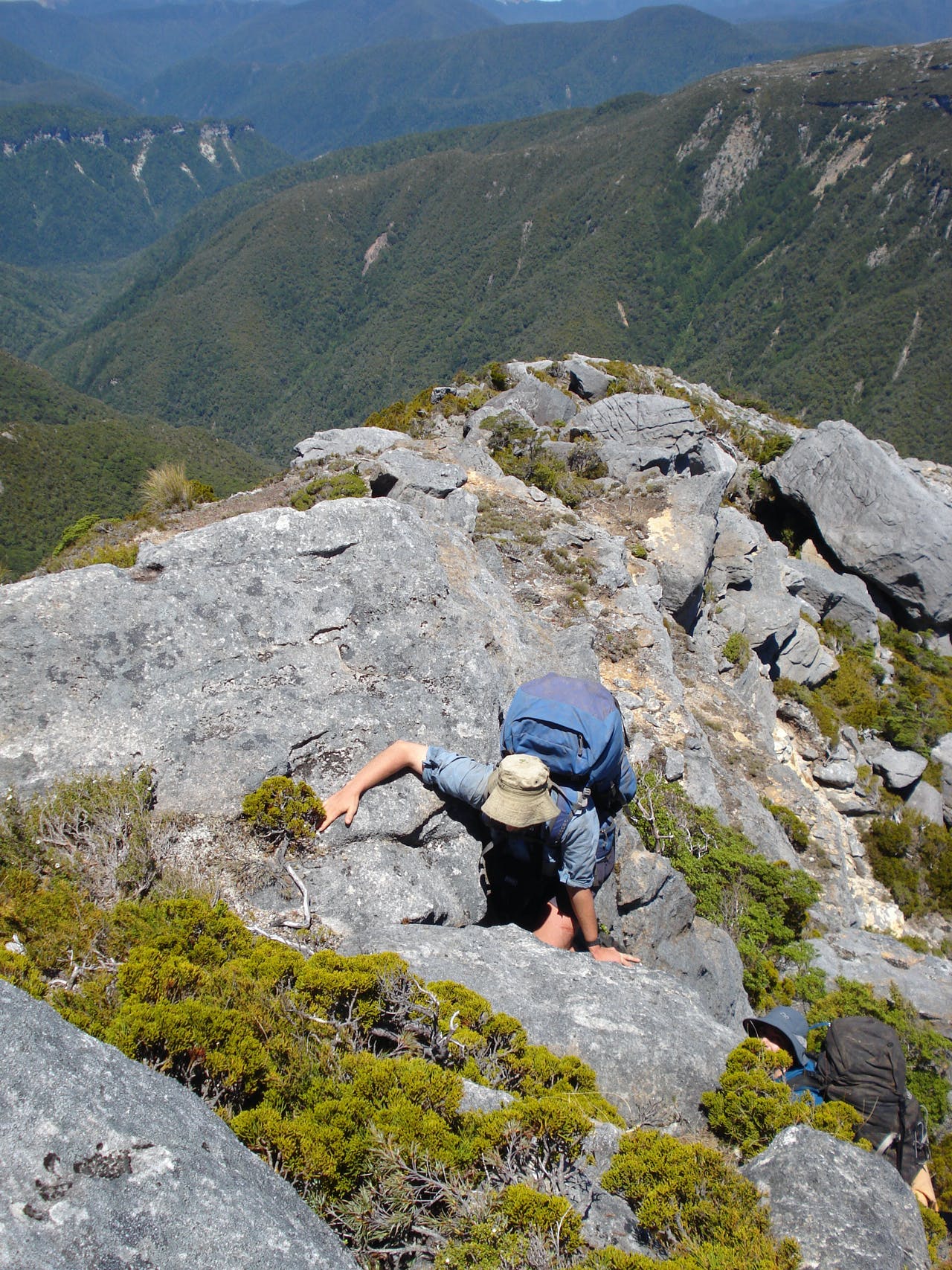 Ascending the spur onto the Garibaldi plateau. Photo: Hannah McGregor

The thick air in the tents could not suppress our cries of outrage. Bob might have been having trouble receiving them in Wainuiomata, but we were barely four kilometres south as the crow flies. Our intended route went right through the campsite of some trampers connected to the aerial across the valley.

Thirty two hours later the sun was up and the steam was still rising. Across the valley was the plateau, with its 600m vertical buttress, and beyond that a virtual metropolis of trampers – at least five. There was nothing for it but to head across and try to crowd them out.

As the day warmed up we tackled the stiff scrub down to Silvermine Creek and then crashed up the other side. By 4pm we were standing at the edge of the plateau. For hundreds of metres the tussock and the heady bulbanella rippled in the air.

As we got closer to the middle of the plateau we could also see the rippling of a sky blue tent. The closer we got the clearer it became that there was only one good campsite. We were breaking ground through the lumpiest siblings of the grass family, separated by haphazard lines of tomos. The plateau was like a hairy, overgrown glacier complete with stomach churning vertical slots.

As we approached the one good campsite the owners of the blue tent picked it up from the one sort-of good campsite, now well-worn and mushy from three days of rain, and moved it to the good campsite.

We pitched our tent family in a slopey corner with a busy pile of guts for company, long since separated from the rest of the deer and on the way to compost. A big family of blowflies helped out with the cooking, and then hung around for some after-dinner drinks and conversation. To the north-west we could see into the heart of Kahurangi National Park up the curling arms of the Beautiful and the Ugly valleys.

Worse, despite a cracker forecast, we had run out of time to enjoy the Plateau. We plotted out the route to the Karamea River, skirting the edge of Sandy Peak and then following a broad rolling spur to its foot. The map showed just one difficult obstacle at the end of the Peak where the contours met before the route gained the ridge.

Come the morning, however, the other party showed no signs of leaving. There was nothing for it but to procrastinate. We filled our camera’s memory cards, squeezed the last puff of air from our sleeping mats and packed and repacked the cooking equipment. We went for a couple of toilet trips. Why on earth was it taking so long to fold one five-man tent? At the last possible moment the other party hoisted their packs and started off. We gave them a full five minutes and then followed.

They made us a tidy scuffed footpath along Sandy Peak’s white powdery flank which proved so easy to traverse we almost caught up. Then, just ahead, the reached the steep ground. As they gained the leatherwood and assorted scratchy scrub they headed straight up like polypro spiders. Above our heads, where the daisy hand holds started to thin out, they climbed the vertical grass like insects on a longdrop wall. We stared in surprise and almost gained a bouncing pack, and a couple of rocks to the skull. When the last leather boot went over the top, we broke into spontaneous applause.

Our ascent, tunneling through the spikey embrace of the leatherwood, was safer but far less gymnastic. We caught them again where the route began to plunge towards the Karamea and joined them in some celebratory crackers and a last look at a good view. Talk turned to the Herbert Range and its hermit as in their party was Jan Heine. In 1997 Jan was among the party that helpd DOC take down Cover’s camp. She could point out to us, across the valley, where they had found the remnants of his antenna and his tent and where the last of his ropes might still be hanging from the bluffs. Lost, alone, catching lightning.

The Karamea River was fresh to cross but there was no sign of the barreling monstrosity it had been in the rain. Karamea Bend Hut had one fisherman and a much greater number of sandflies. We were down to the last of the rations, which we noticed even more when our rival party revealed a secret hut stash of biscuits and cheese.

In the morning we took the most direct route back towards Flora car park, up the old pack track to the Tablelands. It was too early to head for the car park – our van ride was not due for another day – so we found a campsite that looked back towards the Plateau and exhausted the last of our camera batteries.

It was a short walk out in the morning, meandering via the historic shelters, eating the strange food that always gets left till last and planning our next trip, to the supermarket.