Time
Allow two days to walk to Mokihinui Forks and back. (Seven hours to good camping at Specimen Creek)

Access
At the end of Mokihinui Rd, reached from the Karamea Highway (SH67) and Mokihinui - Seddonville Road.

After recent publicity, an autumn trip to the Mokihinui Gorge seemed a great opportunity to catch up with goings-on in the valley. The dam decision was still pending and there was The Old Ghost Road cycle and tramping track from Lyell to the Mokihinui to check progress on.

The dam proposal had concerned me deeply. Planning to flood a whole valley of native forest for any reason these days is so retro. Proposing to do it on land already set aside under statute for conservation indicated the place was still seen by business as a wasteland waiting to have its resources swapped for lollipops. My power supplier was Meridian and I was so incensed by their plans that I changed companies.

On the positive side, Meridian has since abandoned their dam proposals, and the Department of Conservation is to be congratulated for its stand that no mitigating effects could cover the cost of flooding such a magnificent gorge. However, the department should not have to spend its meagre resources fighting off business attacks on protected public land. Neither should the public for that matter.

I’d been into the Mokihinui before via the Glasgow Range, dropping down to the river at Specimen Creek at the top of the gorge. On that trip we continued over Thousand Acres Plateau to the Matiri. This time Gaylene and I were keen for something leisurely in a stunning area, and we couldn’t have chosen better. The gorge track is a pleasure, the scenery spectacular, and with the river low, the emerald pools inviting. We quickly fell under its spell.

Not that it started so well. Overcast weather meant the sandflies were out, and then having parked the car and crossed a creek or so we came to a sign that slowed us up a bit. ‘Warning… blasting zone…danger…absolutely no entry past this point…’ The Mokihinui Lyell Trust had staff working on the bike trail. I was reminded of Arlo Guthrie’s alternative words to a song by his father Woodie, This Land is Your Land:

But on the other side, it didn’t say nothing,

That side was made for you and me…’

Having come from Takaka and Christchurch to enjoy the valley, we thought we might check that other side just a little further yet and proceeded with caution.

While taking photos, a muffled boom sounded up valley. Then another. A guy on a motorbike rode down the track. He grinned and asked a few questions, and we grinned and asked a few in return. Blasting was over now, he said, and wished us a good trip. When we met two more cheerful track workers, I found that one of them had grown up in Makarora where I had lived at one time and I knew his mum. So New Zealand.

Pleased to be past the digger and blasting, we ambled on, entranced by the place. Views of the gorge and the track through it are wonderful. A bush flat on a big sweeping bend in the valley looked likely for a campsite, but a loud and insistent stag roaring and thrashing around in the scrub looking for a fight made us try the next one. Stags can sometimes be rather undiscerning about who they take on when full of testosterone. I didn’t need a fight and Gaylene wasn’t looking to join a harem. 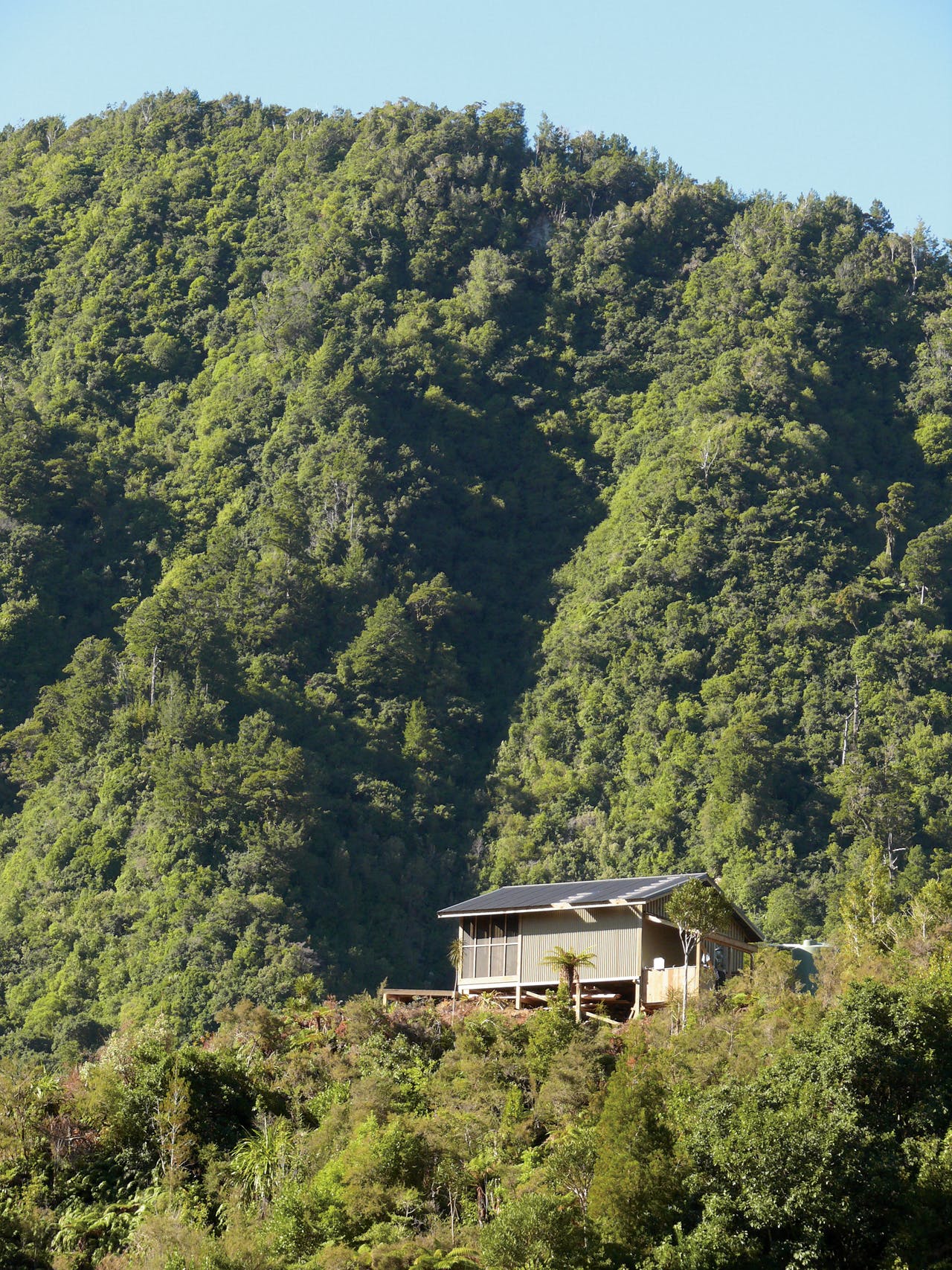 We dropped down to camp on sand by the river, a couple of kilometres up from Rough and Tumble Creek. A driftwood fire, kaka and morepork calling and a still and starry night. Magic.

The morning was fresh and clear, and despite being April, we skinny dipped at the edge of a huge pool in the sun. Then we hid our packs and headed up valley on a return daytrip. The mostly benched gorge track sidled through bluffs high above the river offering grand views of rapids and deep green pools surrounded by regrowth and old forest. Along the track, rimus drooped and tomtits squeaked, black fantails swooped, waxeyes and grey warblers fussed around us and robins eyed us up before proclaiming they owned the place. Wekas flicked in and out of the brush, and a pigeon belly flopped away into the valley. One of the other surprises for April was rata in flower, close to the track and whole sprays of it splashed the views with scarlet. Why hadn’t I been up the gorge before?

I reflected that just here, these plants and animals would be gone if the dam had proceeded. We humans are funny creatures. Enough is never enough, we always seem to have to wring more out of the land. In the 1960s and 1970s the Mokihinui was investigated for power by the Ministry of Works. Then there was the Meridian proposal in 2007 to build an 85m-high dam and flood the valley back upstream for about 13km, almost to the forks.

Up at Jones Creek we came across the remains of a stamp battery. Upstream, a side track leads to an old mine site, where water still gushes from a pipe at the portal high above the river. This is the old Red Queen mine, now flooded. Below, on the main valley track again, old stamper equipment lies beside a rock platform, long overgrown with hookgrass and mahoe.

The valley was proving to be full of surprises, but next up we came to a series of slips that include Suicide Slip, named after a section of benched track slid into the river after the 1929 Murchison earthquake. Long established alternative tracks lead over or across slips and the NZFS and DOC have added to them. On one section a bolted cable offers security. I had been particularly keen to check these slips out, (they are fine) but now I wanted to check out the last two kilometres of the gorge too. Gaylene humoured me and on we continued.

This land up here would also have been flooded by Meridian. In 2010, despite objections, the West Coast Regional Council granted Meridian resource consent to proceed with the dam project. Legally, the valley was as good as trashed, and only a miracle would stop the dam going ahead. The Department of Conservation raised its game and lodged an appeal to the Environment Court. As statutory manager of the land involved, they were probably the only ones with any show of stopping the valley being flooded. This was a bold, costly and extreme step to take for a minor government department, but without it, the dam was a done deal. In response, in 2012 Meridian cancelled the Mokihinui dam project. This wonderful gorge doesn’t know how close it came to being drowned. 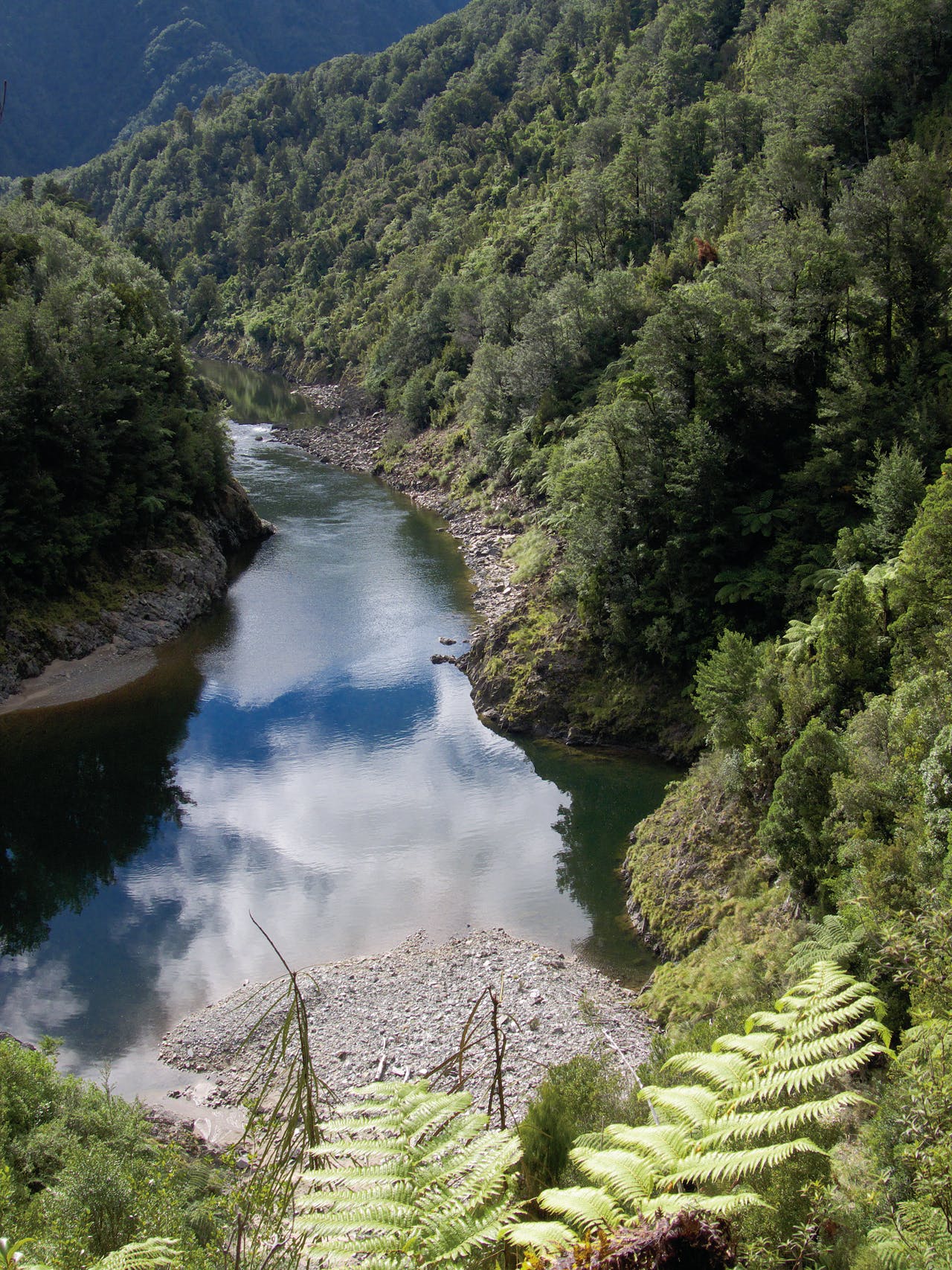 View up the Mokihinui Gorge from the track

As we rounded a ‘last corner – promise!’ there up ahead was a new hut in the fern on the true right of Specimen Creek. Another surprise, but we had a problem. The weather was hot and sunny and we’d been abandoning gear and clothes as we came closer to heading back, and there were clearly people at the hut. Now we were only marginally decent. However, a bit of mix and match sorted it and only I arrived topless.

The hut was the fourth and last to be built as part of an unpaid voluntary effort by Marion Boatwright and his three American friends for the Mokihinui-Lyell Backcountry Trust. (See the website www.oldghostroad.org.nz). We arrived only five minutes after they had finished, and the floor was still wet with polyurethane. Each hut has 12 bunks and is insulated. There is even a covered bike shed attached to each. All up, we were told each hut had cost about $60,000.

When fully finished, The Old Ghost Road will offer a relatively easy 4 or 5 day tramping or biking trip from Lyell in the Buller Gorge through to Seddonville on the Westport-Karamea Highway, linking up infrastructure put in by gold miners at each end over 100 years ago.

Some of the terrain is challenging to build a track through, but the trust has the challenge of raising the money to finance it. This includes about $2m in public funds and more than $1m from West Coast authorities and state owned enterprises. It’s a great opportunity, and if it helps more Kiwis connect with the outdoors, then bring it on.

We dallied in the warm sun until 2.40pm before heading back, buzzing over the day, the gorge, the forest and the track. After another magic riverbank campsite, we ambled out under an overcast sky, dropping down a sidetrack to investigate the Rough and Tumble confluence. Rough and Tumble Creek was once the route through to Karamea, and steel beams from a bridge over the Mokihinui still remain in the river, brought down by an earthquake. On our way out we ran into a local fishing for trout.

There are layers of history here, spectacular reminders of major earthquakes, bluffs and forests, varied birdlife, and a magic river of emerald pools.

The Old Ghost Road will be under construction all next summer and that means the new huts are not open to the public just yet. DOC huts in the catchment, at Goat Creek and Mokihinui Forks, should still be open though. The hope is to open the cycle track in March 2013.

The future for recreation in the Mokihinui is looking very bright.