Access
The Adams Wilderness Area is normally accessed via the Whataroa, Wanganui or Clyde Rivers. All approach routes are very difficult and require multiple crossings of many significant rivers.

A multi-day journey across the Adams Wilderness Area. By Nick Ross

“We should just be able to shoot along this ridge for a few hundred metres and hit a little tarn.”

My outlook on a likely camping site is met with snorts of scepticism and fatigue. We’ve been on the go for five honest days, from the damp and rough Whataroa River, up the increasingly tortuous Perth River and are now searching for somewhere to pitch our tents at the head of Lambert Spur, far above the Wanganui River. The last two days have featured a stunning waltz across the high ice plateaus of the Garden of Eden and Allah culminating in a gripping sidle on steep, exposed and chewed-off tussock.

First trod by John Pascoe and a Canterbury Mountaineering Club party in 1935, the Gardens are extensive ice plateaus enclosed within the Adams Wilderness Area, sitting west of the main divide at the headwaters of the Rangitata River in the east, and Perth, Adams and Lambert Rivers in the west. Colourful biblical and poetic themes were prominent in the naming of the area – Garden of Eden, Garden of Allah, Beelzebub Icefall, Satan’s Saddle, Angel Col, Devil’s Backbone, The Great Unknown, Elbis Gorge – which, combined with a reputation for rugged and difficult access, has created an aura of mystique.

We began our journey in sporadic rain heading up the Whataroa River. The track meanders up valley to Nolan’s Hut through prehistoric Westland rainforest. After a swingbridge crossing of the raging Whataroa we enter the Perth River. By the time we reach the hut, some four hours later, we are sodden which, combined with our laden packs, dampens enthusiasm for a late plod further up valley to Scone Hut. After some coaxing we have a fire roaring and settle into the rhythm of the mountains, eating, pondering and talking over maps.

The following day brings more murky southerly weather for the increasingly rough track up the Perth toward the confluence with Scone Creek, but by lunchtime we are tucking into gourmet hut food that has been left behind at Scone Hut, courtesy of the many heli-hunters who visit the area. Over lunch we contemplate the official beginning of the Adams Wilderness Area, only a few kilometres from Scone Hut. We have read that the track ends abruptly at Redfield Stream, but, as one of the main entry points to the Gardens, we are confident there will be some sort of foot trail. 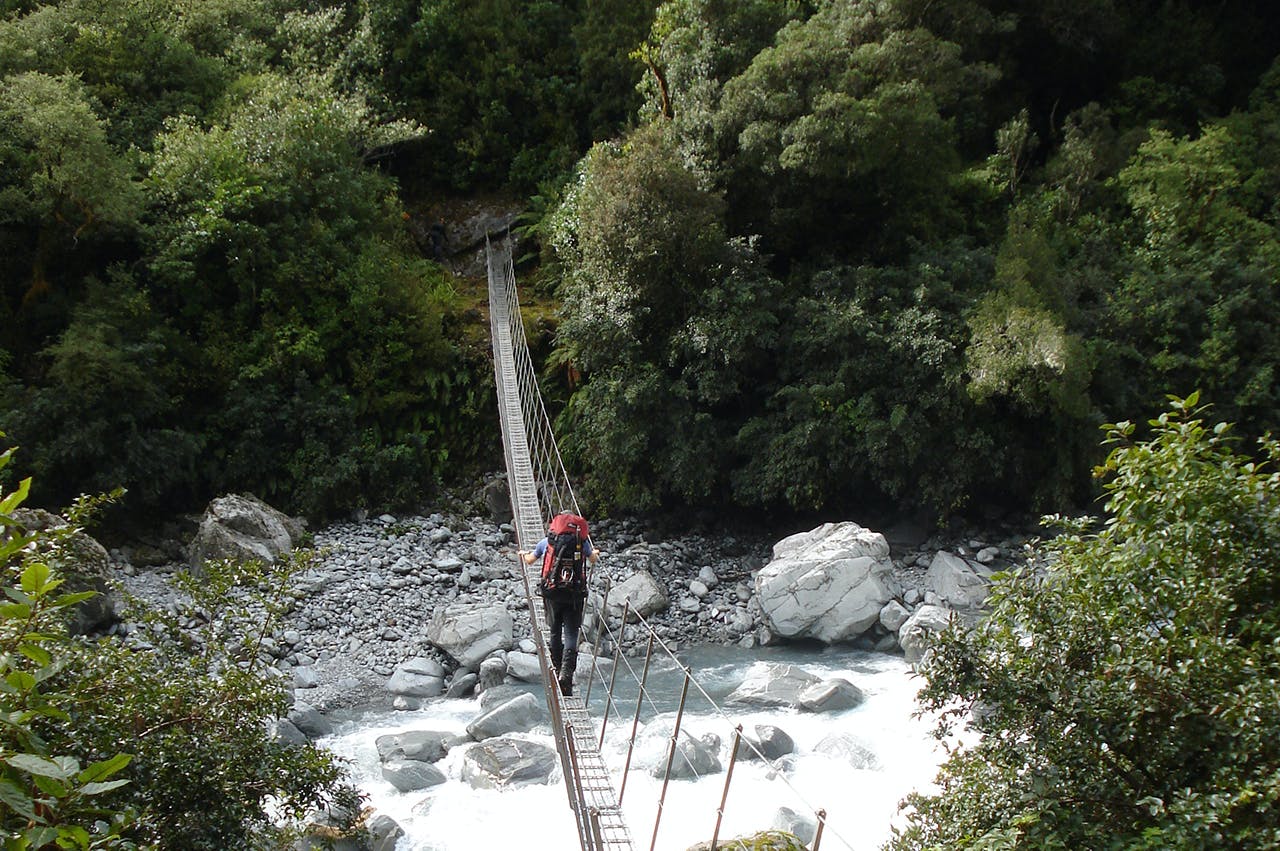 How wrong we were. Leaving Scone Hut we promptly cross Scone Creek and head again into the Perth. After ten minutes of pleasant track we arrive at the Redfield Stream and the last vestige of human presence. Rather than cross the bridge, our route sources stated the best travel was to remain on the true left and drop into the riverbed to progress up valley.

Wilderness begins immediately, the Perth is an ice grey river choked with an assortment of gigantic boulders and tight tangled bluffs. It is hard and physical going, and no-where do we see signs of other passers-by. It is a great feeling and in on-going drizzle and sporadic southerly gusts, we pitch our tents on an assortment of angular rocks.

The forecast predicted the southerly would blow out after a day or so. Yet, in the half light of the new morning, as we continue up valley towards the junction with Adverse Creek, our departure point from the Perth River, we are still battered by strong, cold gusts.

After a solid morning of activity we are above the scrub line, looking for a crossing point of the Perth. Even in its infancy, a mere six-kilometres from its glacial source, it is wild and turbulent.

We move quickly up Adverse Creek, but soon decide that to continue further toward the Gardens with the current weather conditions would leave us high and exposed. So, when we find a spot with gravel and moss benches, we camp for the remainder of the day, then rise early at 2am and set off over confused boulders and moraine, for the Garden of Eden.

Soon, we strap on crampons and head up the true right of the valley on rapidly steepening ice in the pitch-black of pre-dawn. This route is described by the Canterbury Westland Alps guidebook as ‘probably easiest’.

The first hint of light confirms the best option to gain the Garden is to continue above and to the true left onto some ‘awkward bedrock’ mentioned by the guidebook as a possible route. A couple of hundred meters of blocky scrambling brings us to a rock step. With the rope out, we climb onto an exposed slab which falls away steeply into Adverse Creek. It’s a nasty bit of terrain and difficult to protect, leading to a long run-out and eventually a sitting belay amongst boulders above the slab. Sophie scrambles for holds as the rope leads her off course into some tricky manoeuvrings and a few low-flying rocks keep Ash and Charles tucked in to the slope.

Along the ridge of the Little Unknown we catch our first glimpse of the Garden of Eden. Row upon row of crevasses glisten in the morning sun and stretch out of sight into the spectacular interior of the Adams Wilderness Area. 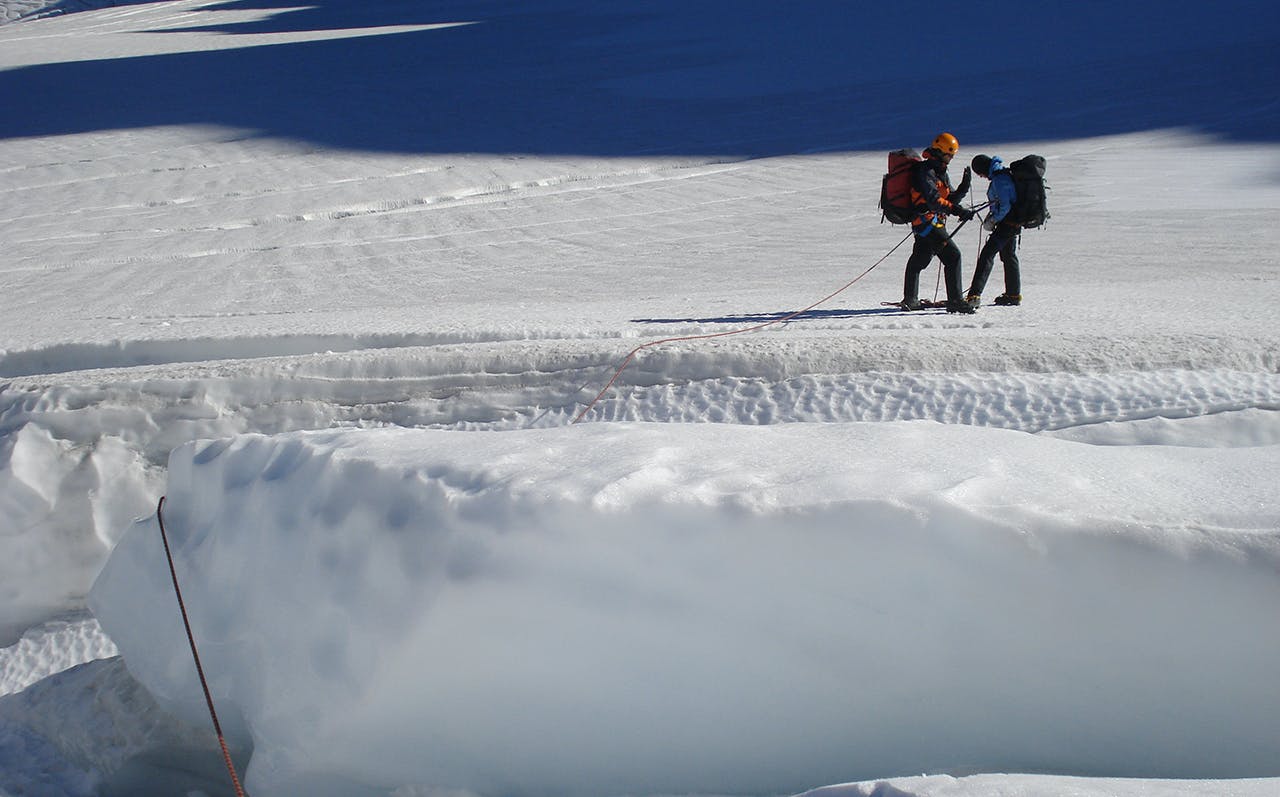 Eight kilometres from the head of Adverse Creek and our access point onto the Garden of Eden, we reach Adams Col. It has taken eight hours of negotiating crevasses from our first glimpse of the ice to reach the narrow cleft that drops toward the Garden of Allah. Skies are clear and there is a bitingly cold sou’wester blowing which means stoppages have been hurried and normally feature gasps of shock as the next viewpoint reveals another maze of crevasses. To the south, Aoraki/Mt Cook angles proudly over the peaks of the upper Tasman. We’ve toiled for three days through some insanely twisted bush to get here and now, as our minds wander to dwindling food supplies and the conditions of the Allah and the Lambert glaciers, we can’t get off fast enough. We drop to camp on a sheltered patch of moraine below Icefall Lookout, nestled between Eden and Allah.

Our fifth day is crisp and clear, the wind having gone, and after the toil of the previous days we are treated to a spectacular day in the mountains. Some scrambling leads us comfortably onto the Garden of Allah. Other than one heavily crevassed section, which is swiftly dealt to, we are basking in the sun on Satan’s Saddle and revelling in the views north-east to the mighty peaks of the upper Rakaia, Whitcombe, Evans and Ramsay. Down the Lambert Glacier we stroll, with a steep pinch due to a large schrund to gain the ridge of Mt Lambert. An abseil takes us onto the sunny northern slopes of Mt Lambert where we kick back and have some soup.

The afternoon is spent on a glorious sidle, at times on steep and exposed tussock. Far below roars the dark cataract of the Lord River. In the fading light we scramble onto the Lambert tops and catch the Tasman Sea fading into orange and inky blue.

The final hurdle is crossing the Lambert River. The swingbridge was washed out a few years ago and we understand the river is not to be trifled with. It’s hard to put out of your mind given it is the last day of the trip, but with desperation and Ash’s willingness to swim spurring us on, we bound downward and hit the track cut by DOC. Nearing the river, the roar of the gorge makes the thought of a difficult crossing probable, but downstream we find a waist-deep pool leading to a gravel bench and we sneak over. Were the water a few more centimetres deeper, the strength of the flow would have made it too swift.

As we near the end of our journey, at Icefall Outlook tents are pitched amid the moraine and we reflect on Pascoe’s journey 75 years earlier. His party were first to gaze at the Aresthusa Icefall and toil their way down the Adams River. From a lunch spot high on the sun-warmed rocks of Mt Lambert, we gazed in awe at the chasm formed by the Lord River and peered into the depths of the Lambert Gorge. Bedding down on Lambert Spur beside the tarn, we couldn’t help but be impressed by Geoff Spearpoint’s more recent twenty-four-hour non-stop mission from Erewhon Station to the Wanganui road end, a trip covering some 70km over rugged untracked country.

Up there in the wilds of the Gardens, we felt close to the early adventurers. There was no sign of previous travellers, no cairns or orange triangles to follow. We toiled with house-sized boulders in the Perth River and sat in the sun upon Satan’s Saddle, scrambled one last rubbly col to watch the sun sink into the Tasman Sea and debated route selection and options.

Walking to the road end we were left with a deep delight in a pure and shared experience and an appreciation for these untamed citadels of the wild.