The stunning scenery and historic lighthouses of the Te Paki Coastal Track make for a memorable tramp, writes Wayne Pooley

As we stood waiting for the shuttle at Waitiki Landing, my mood began to mirror the leaden skies and steady rain. Walking the Te Paki Coastal Track (formerly known as Cape Reinga Coastal Walkway) had been planned six months before and March had seemed a good month; not too hot and not too cold.

Rain wasn’t part of our plans. But by the time we had been dropped off at the eastern end of Spirits Bay, itself to the east of the Cape, the rain had stopped and the sun was peeking through the clouds, illuminating the beach in the mid-distance.

One of the great appeals of tramping is the huge variety of environments you can walk through. Although with my friends Dean, Mike and Geoff, I have a fondness for winter tramps in the mountains, we were relishing the idea of a coastal walk.

The eastern half of Spirits Bay consists of a crescent-shaped strip of golden sand (Te Horo Beach), which contrasts strongly with the coastal bluffs in the west. The abrupt transition from beach to bluffs occurs at a smaller inlet called Pandora, which was our destination for the first night.

A feeling of remoteness combined with the stunning colour of the sand and turquoise sea made for a fantastic start to the tramp. Although the loose sand made for difficult walking, we made steady progress towards Waitahora Lagoon at the western end where DOC has constructed a boardwalk. After steeling ourselves for a challenging crossing it was almost an anticlimax to find the lagoon wasn’t connected to the ocean. By skirting around the rocks on the far side we clambered to the top of the hill to be rewarded with panoramic views over Spirits Bay. From here we avoided the last hill by taking the low tide route to the tent site where DOC has provided facilities, including toilets and a timber gazebo for sheltered cooking and dining.

We were greeted by a trio from France, Mexico and Ireland who had come from the opposite direction. These would be the only other trampers we would see for the entire trip. In contrast to us, they had spent the day enveloped in mist as they made their way over the coastal hills and so seemed considerably less upbeat. 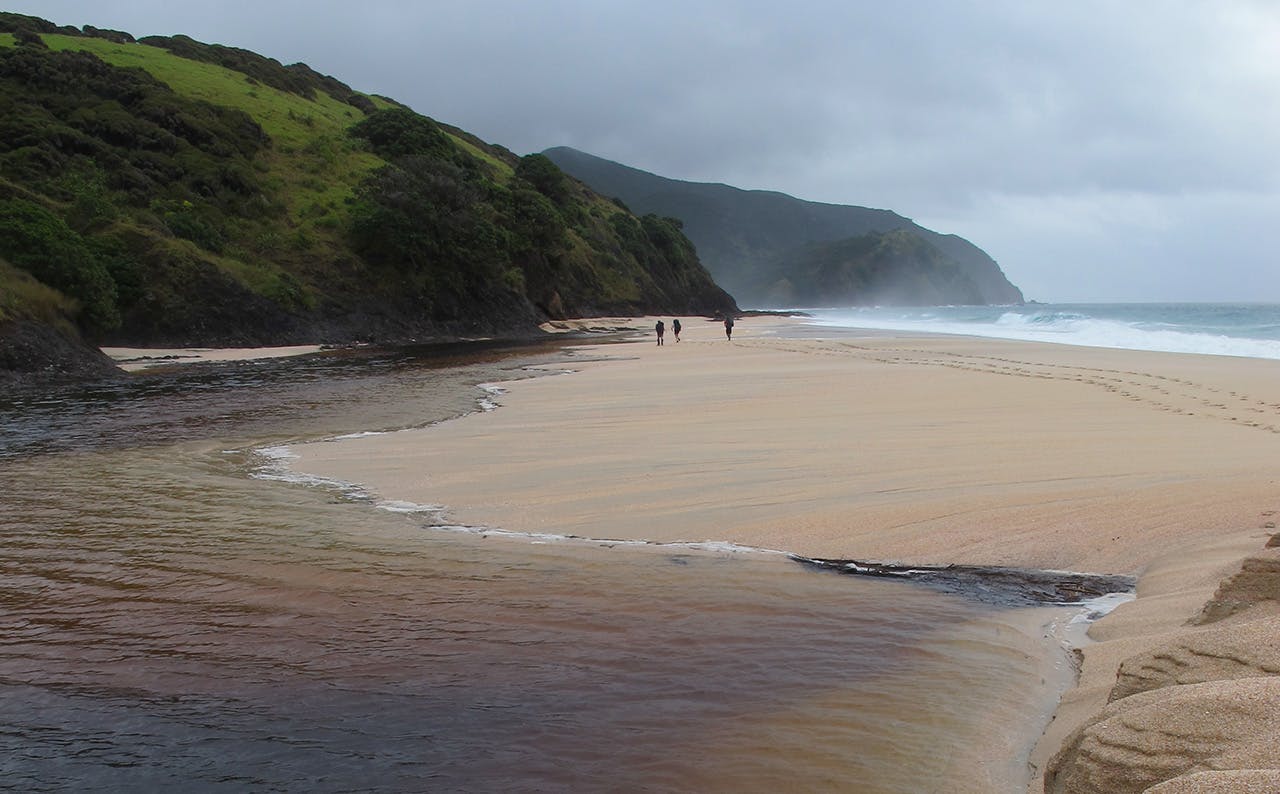 Despite the soothing sound of the waves, sleep was largely elusive. When I did finally nod off I dreamt I had woken Geoff, who was none too pleased, to see the dawn. Waking from my dream, I realised it was in fact dawn and scrambled to get my boots on. Leaving Geoff to sleep on, I grabbed my camera and with Mike set off for the short walk to the beach. The weather was perfect, the rising sun coloring the clouds with vivid hues of apricot and violet. The stream reflected the sky and pointed towards the sea and distant inky hills.

A steady 45-minute climb out of Pandora brought us to a junction above Kauetewhakapeke Stream. South led to Te Paki (1394m) and SH1 while north followed Darkies Ridge on an undulating track to Tapotupotu Bay. We gained our first views of Cape Maria van Diemen from the ridge and three hours later descended to Tapotupotu.

Having reached the campsite by lunchtime, our afternoon was whiled away swimming and relaxing under clear sunny skies. However, I was starting to regret not applying my insect repellant earlier. Kylie at the DOC office had warned me: “You really will need it.” It was no idle warning; I had not noticed I was being bitten and found myself nursing 20 itchy welts on each leg.

A deteriorating forecast forced us to get up early in the hope of reaching Cape Reinga before the rain. Breakfast was swallowed under the light from our head torches before we hastily packed and headed along the beach to rejoin the walkway.

The steep track led to huge cliffs dropping vertically to the rocky shore, before briefly heading inland. An hour after leaving Tapotupotu Bay, we descended to Sandy Bay and then tackled the final climb to Cape Reinga – not quite New Zealand’s northern-most point as commonly believed. That honour belongs to the Surville Cliffs at North Cape, some 30km to the east.

Accompanied by the first drops of rain we made our way down the path to the lighthouse, the white structure contrasting starkly with the brooding skies. Completed in 1941, this was the last watched lighthouse to be built in New Zealand and was automated in 1987. Offshore, huge collisions between opposing waves indicated the meeting of the Tasman Sea and Pacific Ocean. Better views were gained further along the track where the waves could be seen side on. 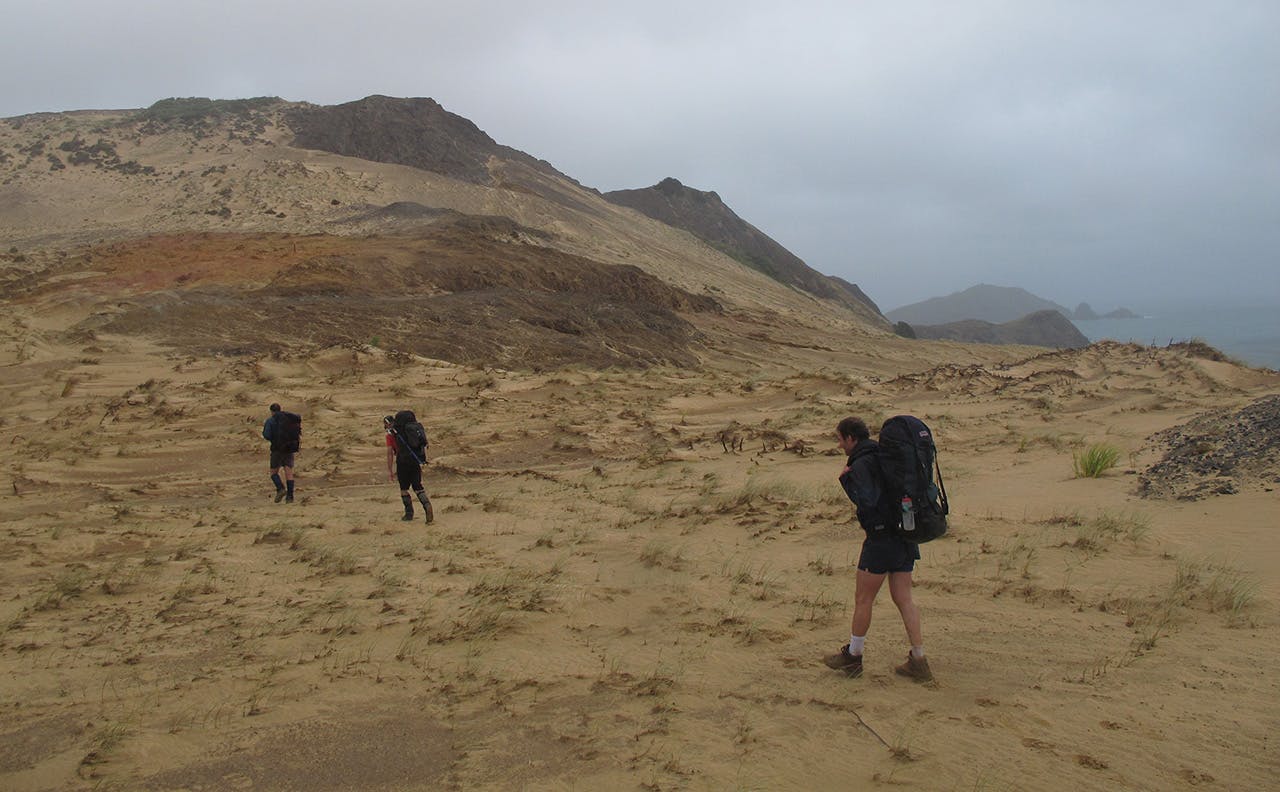 Dropping to Te Werahi Beach bought us to the west coast and roughly the halfway point of the walkway. Although the hard sand made walking much easier than Spirits Bay, the intermittent showers had me envisaging how much more enjoyable this would be in fine weather.

Confronted by the wide and shallow Te Werahi Stream at the southern end of the beach, I made the foolish mistake of trying to run through in a tip-toe fashion. Water poured over the top of my boots and as I changed socks, I made a mental note to take my boots off before the next stream crossing.

Crossing this stream brings you to Cape Maria van Diemen, named after the wife of Abel Tasman’s patron in 1642-1643. Cape Maria van Diemen and the Three Kings Islands have the distinction of being the only two features to have retained the names given to them by Abel Tasman. The cape is the western-most point of the North Island and is formed of volcanic islands that have been connected to the mainland by huge sand dunes.

As we climbed towards Herangi Hill, the landscape changed to basalt rock and windblown sand. It is profoundly different to any other part of the walk and this bleak landscape seemed roughly comparable with Mars. Gaining height exposed us to the easterlies where some stronger gusts gave our legs a good sand blasting.

We dropped our packs at the track junction and enjoyed a leisurely downhill stroll to a beach on the north side of Cape Maria van Diemen. The first lighthouse built north of Auckland was constructed during 1877-1879 on Motuopao Island located some 300m offshore. Supporting the resident lighthouse keepers proved to be difficult with supply boats having to combat strong currents and wave surges. Two people drowned crossing this passage and a lighthouse keeper’s wife also drowned in 1933 after being swept off the island’s rocks. By 1937, the decision had been made to decommission the lighthouse and build a new one at Cape Reinga. The top of the lighthouse was removed leaving the lower superstructure, which can still be seen from the beach.

Back up at the junction we shouldered our packs and carried on to Twilight Beach. By now the consequence of my wet boots, mixed with sand, was becoming apparent in the form of large and unwelcome blisters turning the one hour walk along the beach into a teeth gritting exercise.

The tent site was situated at the top of a tree-fringed cliff with views over the beach and stretching back towards Cape Maria van Diemen. While the views were appreciated, negotiating the stairs for the late afternoon swim was not. Geoff kindly lent me his jandals to get back up but all the same, my agonised plod back up had all the appearance of premature aging.

The next morning, tents were packed under the threat of showers. We headed overland, above the roaring Tasman Sea, past Pukekura (120m) and between bluffs to Ninety Mile Beach. The walk to Te Paki Stream took an hour at a quick, steady pace. Seagulls flew high and dropped shells onto the hard sand.

Tour buses turning off the beach made the location of Te Paki Stream obvious from some distance. While it was wide, the stream was the depth of a puddle. Walking along this quicksand was fascinating with each step creating a quivering effect, similar to walking on a lake of jelly.

Having time to kill before our scheduled shuttle pick up, we dropped our packs and headed up the giant sand-dunes that border the northern side of the stream. An onshore breeze made the sand swim around our feet and whipped it off the tops. After the compulsory sprint back down the dune we began the last trudge to the car park. To our surprise the shuttle driver had turned up early and driven 100m down the stream to pick us up. Although grateful for his thoughtfulness we decided that having come this far we had to see it through.

He shrugged his shoulders and headed back to allow us to complete the final five minutes on foot; perhaps used to the tramper mentality by now.

Shuttle A shuttle service operates from the campground at Waitiki Landing. P: 09 409 7508