Access
Mesopotamia Station is at the end of Rangitata Gorge Road. There is a signposted car park here. Bush Stream is part of the Te Araroa trail

To drive the road to Mesopotamia is to drive through a slice of New Zealand’s high country history. The long dusty road up the true right of the Rangitata River takes you past the stations that were split out of the great Mt Peel Station.

As you drive through our pioneering history, eventually the road peters out into the vast spaciousness of the upper Rangitata. Across the river over a million stones, is Erewhon country. Behind the poplars is Samuel Butler’s old place – Mesopotamia. It is one of those drives that feels like it is part of the adventure, not merely a commute.

We were in the Two Thumbs Range because it is sheltered in bad weather. Sheltered is a relative term. Standing on a grey, weed-infested riverbed under an equally grey sky with a throaty nor’wester scouring us we felt justified in our decision to save the West Coast for a better forecast.

We’d made a late start and the evening wasn’t a highlight as we trudged across the stones towards Bush Stream. Crooked Spur Hut is a tidy old musterers hut situated 300m above the stream. We slogged up in the dark with too-heavy packs and bowled a quick meal before bed. No sooner had we blown out the candles than there was the scuttling of small feet running all over our packs and bunks.

“These mice are a bit annoying,” said Ben at 3am. He’s an understated kind of guy.

The next day dawned with some ominous-looking cloud and we climbed and then sidled our way along, high above the true left of Bush Stream passing in and out of lots of tributary basins. It is quintessential high country: yellowy tussocks, shattered mountains all falling down and big, big sky. We arrived at Stone Hut for lunch, and damn me it was nice. Lots of hut food too so we scoffed a big can of peaches and after a while spent lazing in the sun, the thought of climbing 1000m to put in a high camp seemed a bit strenuous. Of course the 1000m climb was only postponed and the next day was seriously hot as we slogged uphill towards a crossing into the Macaulay at 2000m.

“Looks like a fair way up doesn’t it,” said Ben, drily.

This magnificent tramping country was part of the Mesopotamia pastoral lease, but since it went through tenure review it is now part of the DOC estate and forms the centerpiece of the Te Kahui Kaupeka Conservation Park. There is great ski-touring here in winter, but this autumn it was scorchingly hot and we were relieved to flop down on the saddle to admire the striking view of the East Face of Aoraki/Mt Cook. 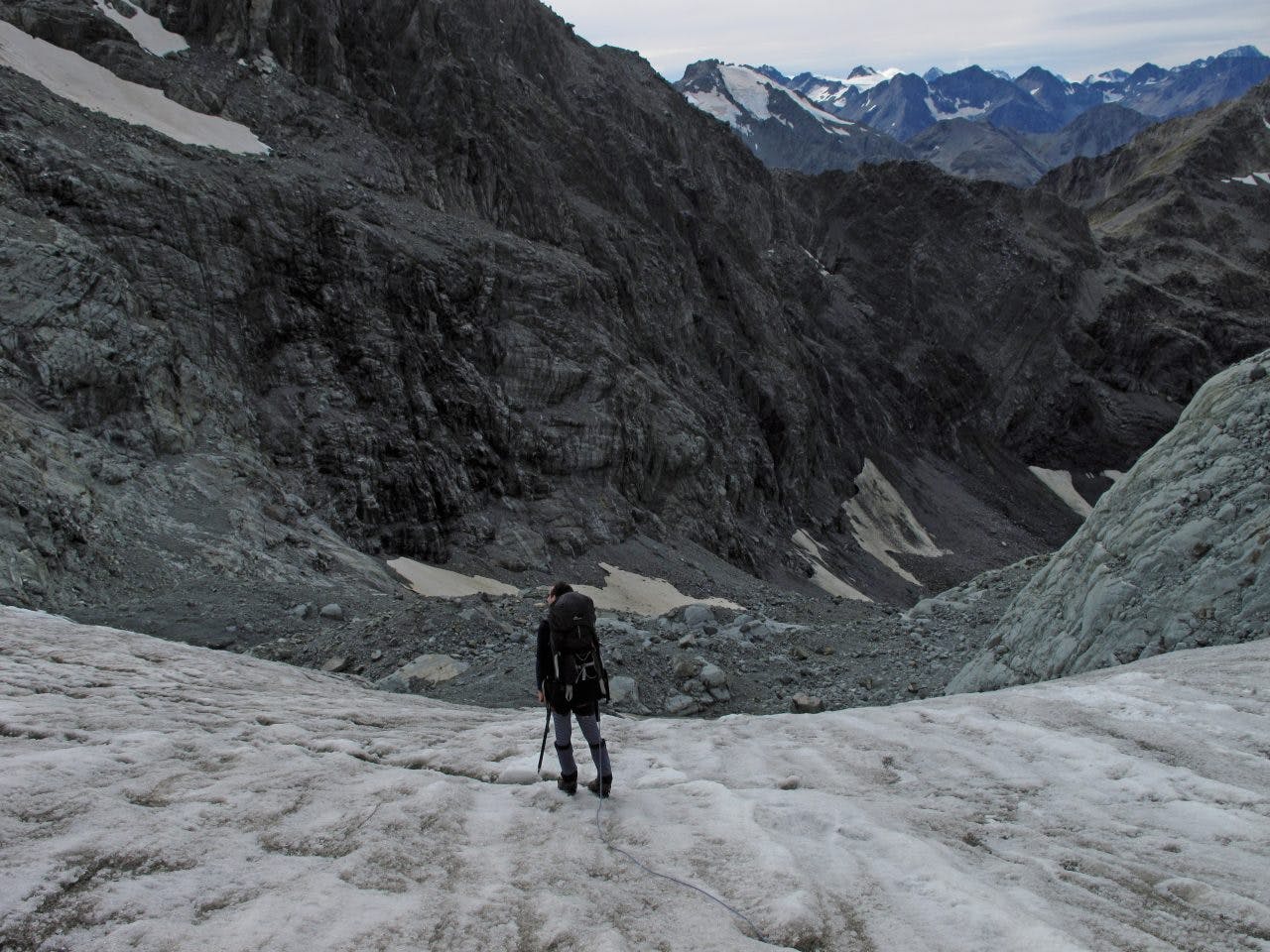 At the head of Murphy Stream and ready for a long walk to Mistake Flats Hut. Photo: Richard Davies

We spent a while enjoying the view as the shimmering braids of the Macaulay River threaded their way past Lillybank Station and joined the Godley to flow into Lake Tekapo. Looking up to the head of the Macaulay we could see our proposed route disappearing into the tangle of peaks.

The Macaulay is popular with hunters and four wheel drivers, and being Easter it was busy. As we got lower we could see windscreens glinting all the way up the river as 4×4’s made their way up and down the flat valley. The wind was picking up and it was one of those classic east coast gravel trudges.

“I’m getting a bit bored of stepping on stones,” commented Ben as we made our way to Macaulay Hut.

Large and spacious and built from local stone, Macaulay Hut is an interesting place. It was built by the local community after the then manager of Lillybank Station burned down two DOC huts further up the river. Being so easy to reach, especially by 4×4, it gets a lot of use. Of course, 4x4s have their uses and we were able to help the occupants of the hut drink their beer that night.

“It’s getting a bit windy isn’t it,” said Ben at around 6am.

We had slept on the porch, which was now being lashed by a vigorous nor’wester. Thick cloud filled the head of the Macaulay and increasingly frequent rain squalls howled down the valley, driving us inside. A relaxing pit day while the rain hammered down made for what was becoming a relaxing trip.

Come morning, the wind swung round and came at us from the south. It was freezing cold and drizzling, which made things pretty bleak as we trudged up valley into the black wall of grot at the head of the Macaulay. I had picked out a possible route on the map, but it wasn’t until we got right up under it that we could see it looked like a nice line. We climbed around the easy gorge, and up the moraine slopes and nipped up a gully which took us up through the bluffs onto an unnamed hanging glacier. We climbed up the ice in a white-out. It was a bit like sailing a submarine, running blind, but the compass saw us right and we reached the top at just the right spot to cross the ridge coming off Mt Earle. We found a flat bit of ice at about 2100m and put the tent up in the freezing drizzle. 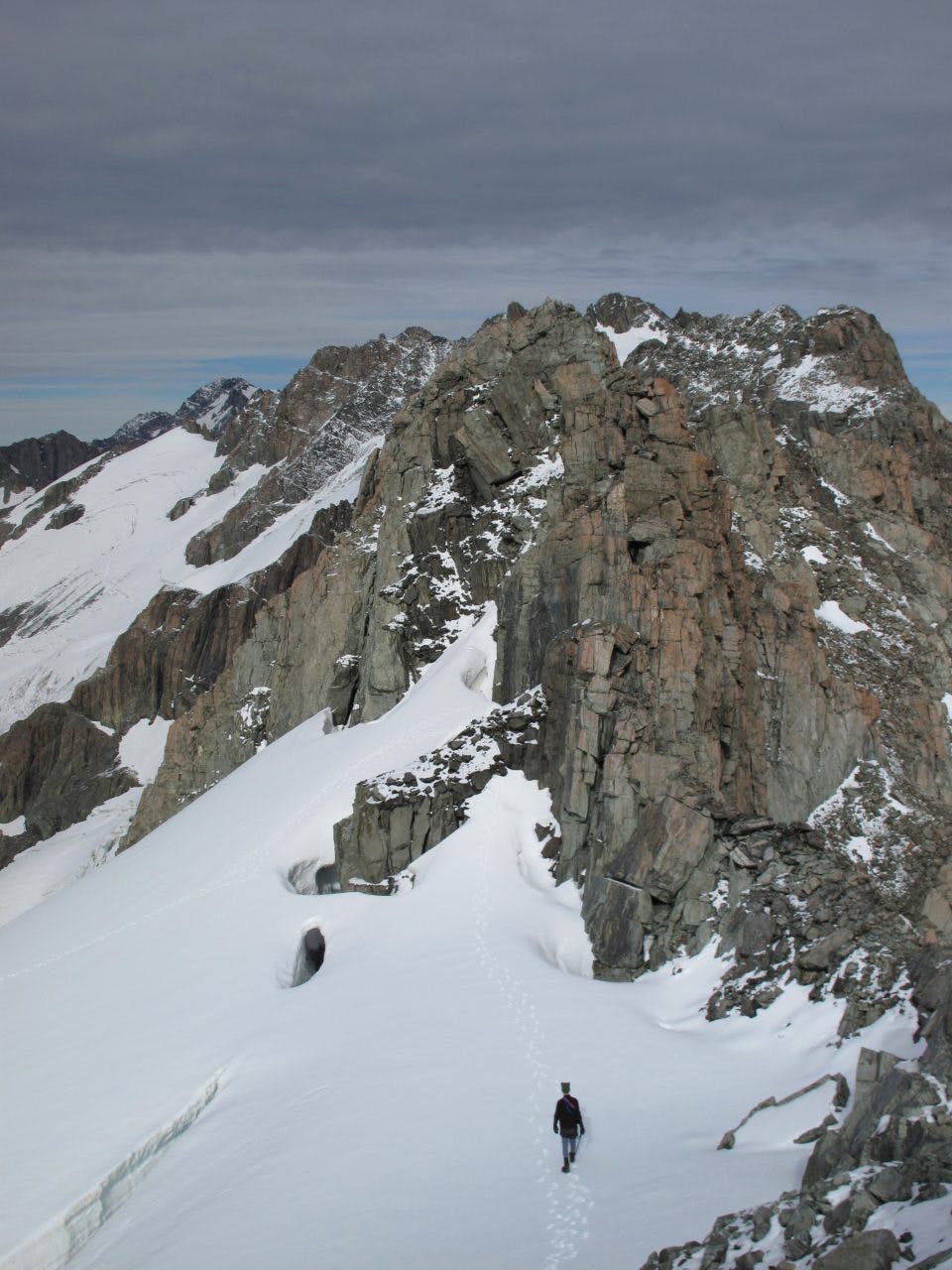 “This is a bit miserable,” said Ben.

We burrowed into our pits and crossed our fingers for a clearance overnight. Sure enough, the temperature plummeted and we weren’t surprised to have some views in the morning, although there was still lots of poor weather hanging around. We climbed Mt Earle, took a lot of photos and then came down, packed up the tent and descended the Murphy Glacier.

By the time we reached the biv in the Murphy, the day was getting on a bit and we were confronted with some really slow travel, and a nasty scrubby grovel sidling the gorge just up from the biv. We made a poor job of route finding through this sidle and were rewarded by descending the last bit in the dark. Once back in the stream the dark made it pretty hard to judge the water levels, but finally we emerged onto the spacious flats of the Havelock River.

We redeemed ourselves for our poor route finding in the gorge by walking straight to the front door of Mistake Flats Hut in the dark, which was a relief as more rain was forecast and we didn’t feel like camping in the damp tent.

Sure enough we awoke to the sound of rain on the roof. Our last day in the hills saw us work out just how far away Mesopotamia Station was. There is a word for gravel bashing down a huge East Coast valley in the rain: Interminable.