Access
The Whataroa valley is accessed 5km north of Whataroa township, on the West Coast

Merging the conflicting aspirations of two outdoorsmen can be difficult. But when it works, great trips are borne.

Drew Daly, 25, a rock climbing guide and ski patroller from Idaho, was in New Zealand looking for challenging alpine routes to climb in the Mt Cook area. I, on the other hand, had two weeks off hospital duties at Middlemore and was pining for some trans-alpine action.

At 33, I was striking a shortage of available partners from my network of ex-varsity tramping and climbing club mates. Marriages, births, mortgages and careers were making things difficult. But a search of an outdoors internet forum brought Drew and I together in Queenstown – now it was just a question of which plans to make.

Bad weather forecast for a few days in south of Aoraki/Mt Cook was pushing our options further north. After lengthy debate and a few beers, we settled on Mt Elie de Beaumont (3109m) as an objective – with a twist. We would approach from sea level on the west coast, 20km north of Franz Josef. The trip would be Whataroa to Mt Cook Village via Elie. It seemed to have a bit of flair, and would meet our disparate aims. We would time our arrival in the Mt Cook area with the onset of fine weather, allowing Drew time for some more technical climbs. 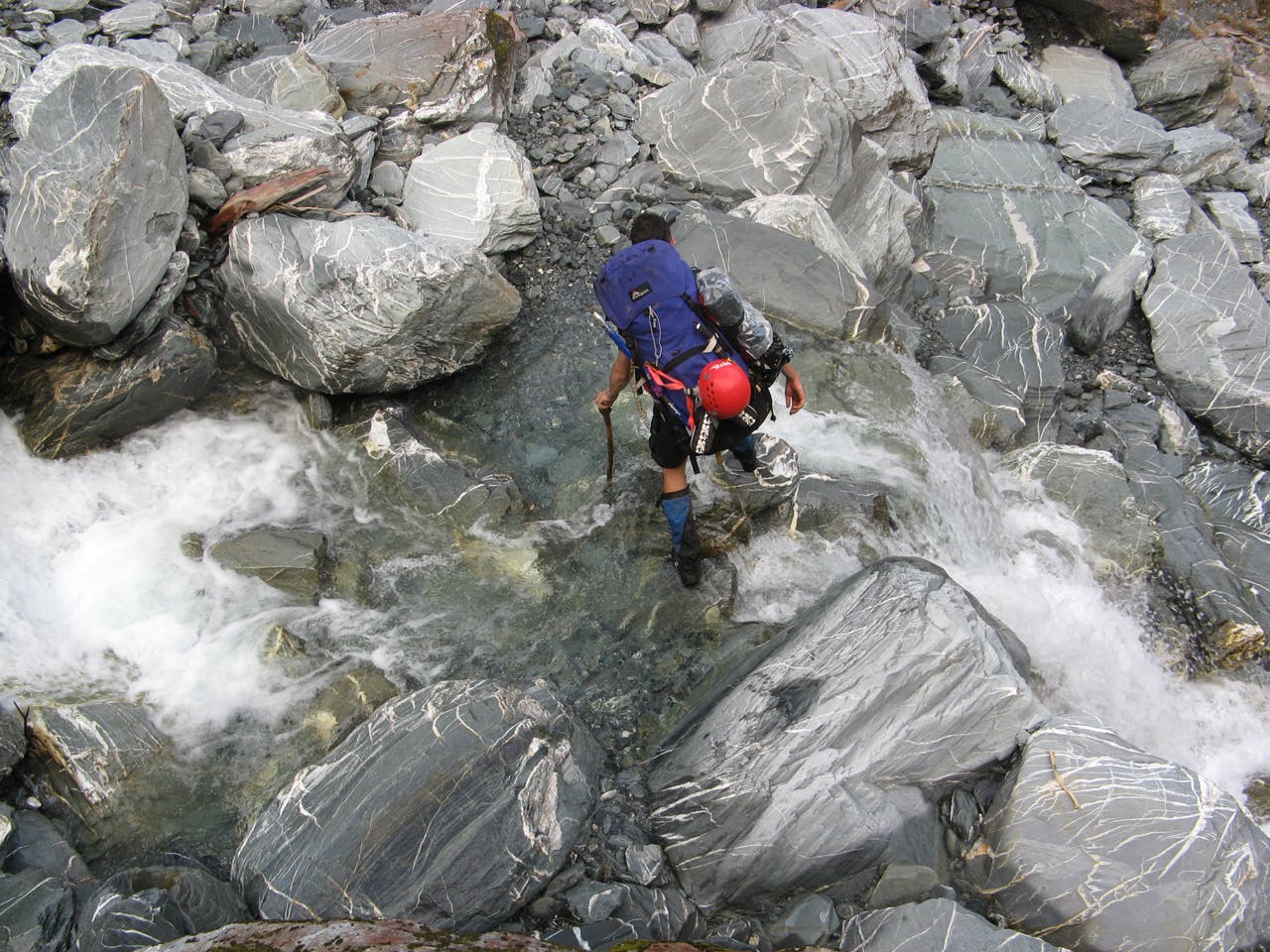 Darren negotiating a side creek

Heading bush with an internet acquaintance can be a gamble. But Drew seemed up to the trip. Not one for superfluous rhetoric, he was clearly a straight-forward, hard bugger, who preferred to let his walking do the talking.

A mid-afternoon arrival in Whataroa, together with wet and dreary weather, saw us head to the pub rather than the track. The same two old coasters that I’d seen propping up the bar on a visit four years before seemed still in good form. It was Tuesday, and that was darts night. The locals eventually turned out in force, unpacking their personal dart kits for some serious combat.

At the track end by 7:30am the following morning, the West Coast rain continued. The start-of-tramp transition from warm vehicle to cold and wet elements was a struggle. A well cut track led us and our seriously overweight packs up the true left of the Whataroa Valley. From the first swingbridge at the Perth river junction, five hours of clean-cut but rugged track saw us at Butler Junction Hut. By this time Drew was becoming calibrated to the slowness of West Coast bush travel, but still seemed mildly irritated that the DOC track time had beaten us by over an hour. Words like “brutal” and “jungle” were slung around the hut.

Next day, another five hours of rough bush track travel had us breaking through to the upper reaches of the Whataroa River. Now in the sunshine, we entered the short nirvana of easy river flats that herald the head of most Westland rivers. Pressing on past Whymper Hut, we easily gained the Whymper Glacier moraine, and then crossed to climb the steep but straightforward moraine wall on the true right, reaching an idyllic grassy ledge at 1150m where we struck camp for the night. The views across the valley to the Maximilian Range were spectacular. The more snowy peaks that hove into view, the less subdued Drew became.

We’d had two hard days and I was secretly hoping the following day’s weather might signal a rest day. We needed fine weather to cross Whataroa Saddle and as the cloud dispersed the next morning we felt obliged to get moving. Upward to the guidebook’s “small knoll at 1640m”. Drew declared to our accompanying party of keas that only a Kiwi would call this a knoll, rather than a mountain in its own right. Climbing the snow slopes above, we were quickly enveloped in cloud. Navigation became difficult and with visibility dropping to 20m, the GPS got an airing. It guided us, after a couple of false starts, up onto the glacier below the saddle. At 2200m we decided that we had little chance of finding our way over the saddle. With rain developing, the tent was quickly pitched and a snow wall constructed to give us a little protection from the exposed north-west. The tent was cramped and wet, and as the wind rose to rattle the sides, we had no idea how long we might be holed up in there.

Camped in a tent on a glacier in rain is not really fun. Suddenly everything becomes a major effort – melting snow for water, cooking in the vestibule without steaming up the tent or asphyxiating from carbon monoxide, peeing in the rain in jandals. No Drew, they’re not flip-flops! We endured a night, a day, and another night, with no improvement. We knew the weather would eventually come right, though Drew seemed a little less sure of it. But after the third night the storm broke at dawn, with sun pushing through the mist. We emerged from the tent and stretched our bodies back into shape. 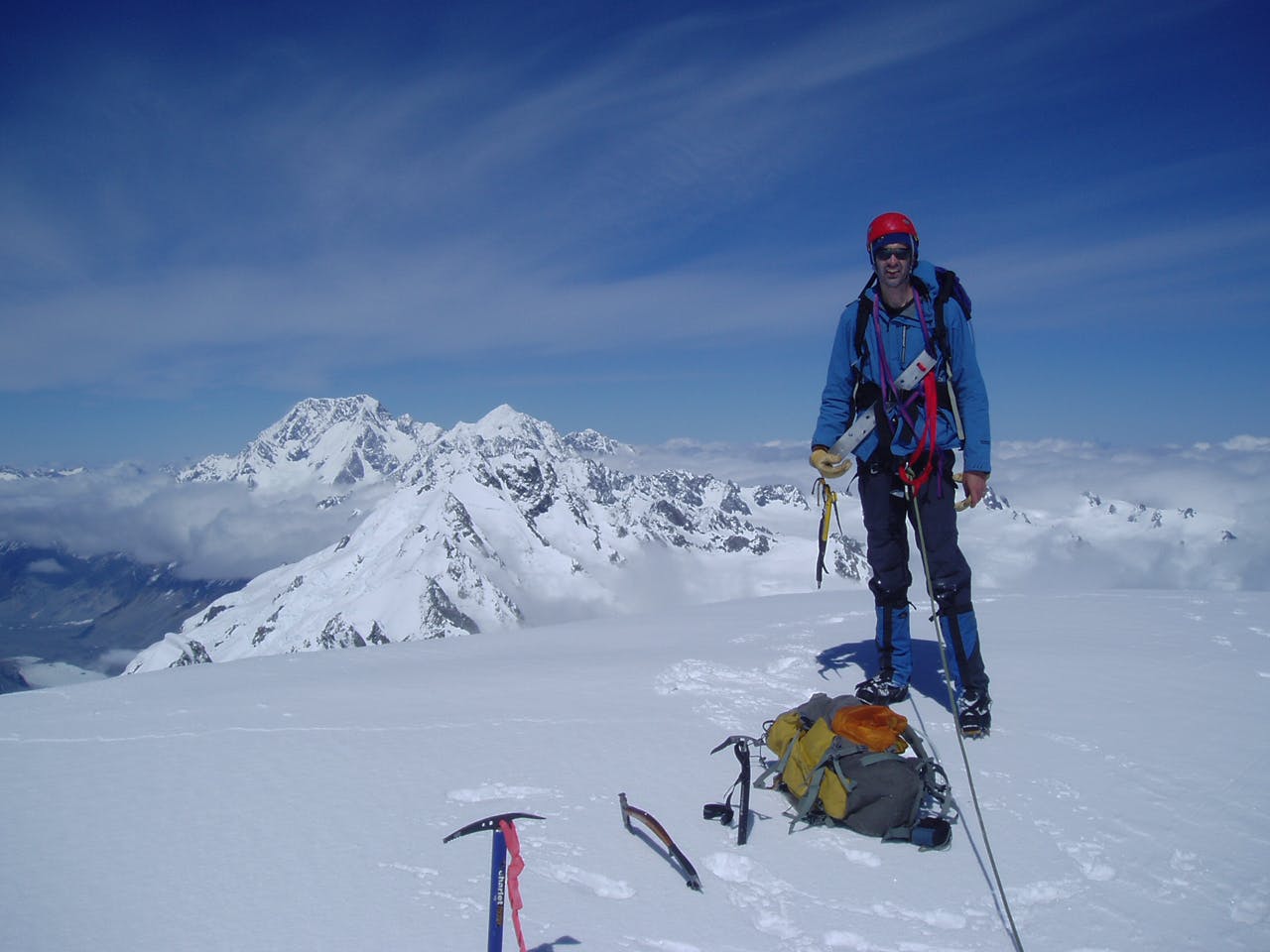 Darren on summit of Elie de Beaumont, with Cook and Tasman in background

A quick walk up the glacier saw us cross over into the Murchison Valley via Pt2442m rather than Whataroa Saddle itself. I took a belay from Drew down the first 30m of loose rock as a precaution. We continued our descent, bisecting points 2286m and 2225m, needing one further pitch before gaining more moderate slopes down to the Murchison Glacier. The day was completed by a slow slog up the Murchison headwall to Tasman Saddle, finishing in the comfort of Kelman Hut, which seemed like a palace compared to our previous three nights in the tent. Our hut mates, guided by Mal Haskins and Marty Beare of Alpine Guides, were ‘fly-in-fly-out’ parties, and seemed suitably impressed by our appearance from the West Coast.

We had come to climb Mt Elie de Beaumont, and had come a long way to do it. So we were rather dismayed when Mal told us that the single remaining snow bridge over the bergshrund at the foot of the mountain had collapsed about a week ago. Nonetheless, we were away at 5am the next morning for a closer inspection, with the hope of finding a way through.

We carefully assessed the 30m deep and 10m wide chasm between us and the mountain. There seemed to be a route of sorts around the shrund that required climbing a short section of mixed rock and ice on the south-east face of Mt Walter. With Drew leading off, solid and sure as always, we went up and around, needing one-and-a-half pitches on rather dodgy anchors. Sitting above the shrund, it was clear that the move was not reversible, particularly in softer afternoon conditions. Just how we would get off the mountain wasn’t clear. We’d been warned that the ancillary route onto Elie, via the northeast ridge of Mt Walter was harder than its advertised grade 2, and indeed it didn’t look favourable. For the moment we relaxed into the ascent, summiting to spectacular views but an ice cold wind, around 10:30am. That we had ascended all the way from the coast gave our achievement a sense of properness.

A lengthy reconnoitre of the shrund from above held up our descent. We eventually settled on an abseil into the abyss, off a T-trenched snow stake, aiming for a low point in the opposite wall that promised an easy climb out. Reaching a false floor of the crevasse 25m down, I was relieved to find it solid enough to support our escape. All that remained was the late afternoon trudge back to the hut.

Despite the collective warnings of our hut companions that night, we made plans to walk out next day to Mt Cook Village. 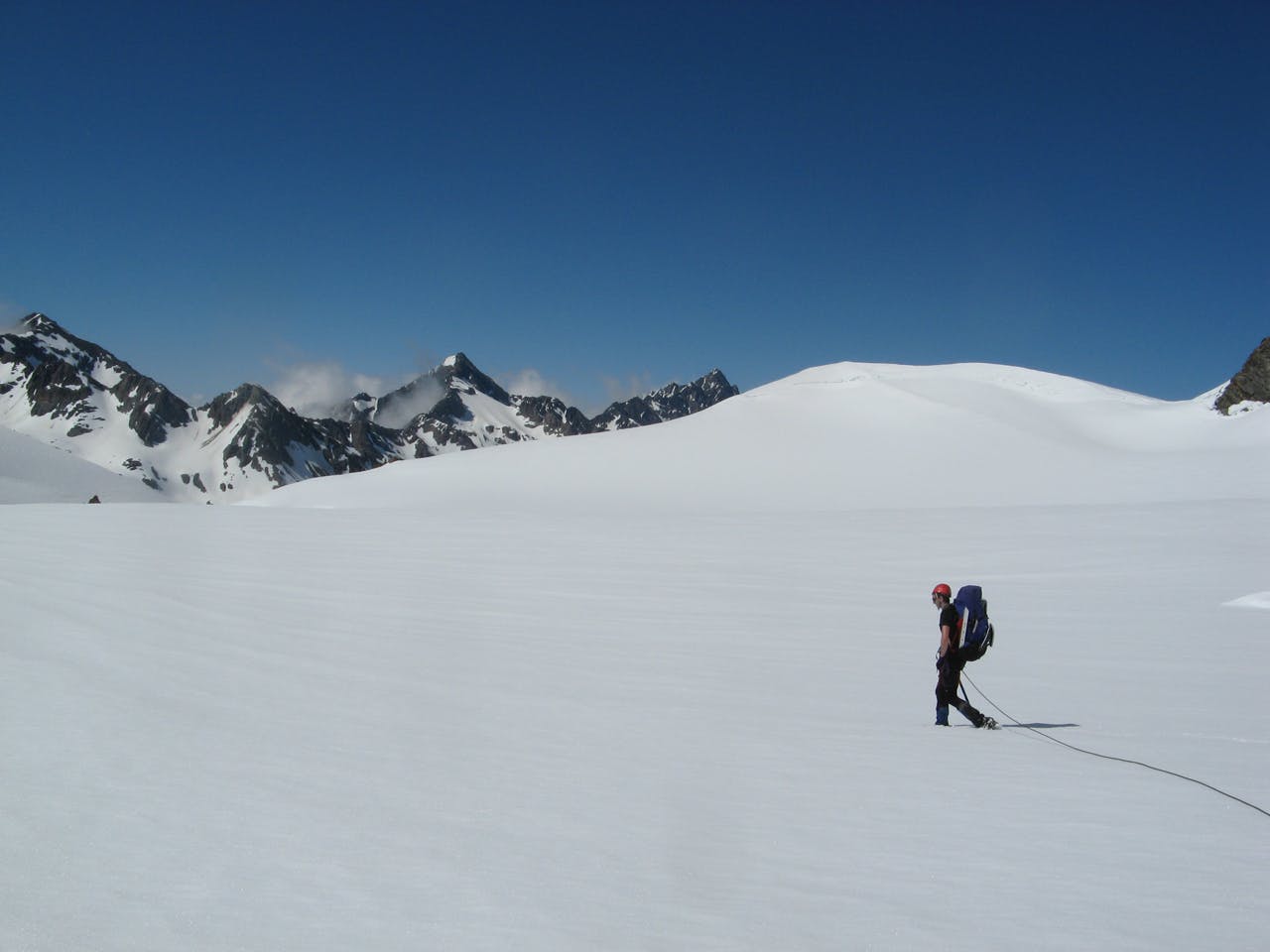 Striding out towards the Murchison

Ask any seasoned climber about the trip down the Tasman Glacier and you are likely to be met with a glassy-eyed stare, warnings of epic moraine, and sharp advice to fly out. Our feet hurt already, but flying out didn’t seem to fit with our journey so far. So it was that we set out to battle the Tasman Valley. By midway, my feet were giving serious trouble. Thirteen hours after leaving Kelman Hut, I limped into the Blue Lakes car park, having barely made it. The Tasman, its jumbled white ice, and unstable car sized boulders, had imparted an infected blister to my left foot the size of an orange.

But we had done it. Seven days, awesome terrain, great company. Whataroa to Mt Cook Village via Elie de Beaumont.