On a recent tramping trip to New Caledonia, Max Olsen is obstructed at every turn by misinformed airline staff from taking his trusty stove on the plane

I own a Coleman Dual Fuel camping stove. I love my stove. I take it with me wherever I go. So when I arranged a holiday to New Caledonia I checked whether I could stow the stove in my luggage on the plane.

All I could find on the Air New Zealand website was a somewhat vague statement: ‘Camping stoves and fuel containers that have contained a flammable liquid fuel may be carried provided the fuel tank of the camping stove and/or fuel container has been completely drained of all liquid fuel and action has been taken to nullify the danger.’

So two days before flying out, I emptied all fuel from the stove – easier said than done due to the coil shape of the fuel tank – and left it in the sun with the fuel cap off for a day so residual fuel can evaporate. Even so there is still the slightest hint of petrol odour in the tank when I bury the stove deep in my pack and head to the airport.

At check-in at Dunedin Airport I tick ‘Yes’ when asked if I have any potentially dangerous goods in my baggage. The chap manning the conveyor belt where I am to leave my pack knows nothing about dangerous goods and calls his superior out of a CCTV monitoring room. She needs to see the stove which I finally find at the bottom of the pack after removing all my camping gear.

“It smells of fuel,” the supervisor says. “You can’t take it on the plane.”

“But I’ve drained it completely; that’s just vapour,” I reply. “That’s all it said to do on the website.”

She calls a colleague who also sniffs the stove and informs me that the decision is made on the basis of smell.

“So there’s no way I can take my stove on the plane?” I query.

I am then presented with a form detailing two acceptable ways of preparing a camping stove for flying. The first appears to be exactly what I have done, but with the addition of placing the stove in a polythene bag. I’m told this is not a suitable option. I need to take the second option and flush the stove’s fuel tank with cooking oil.

I head to the nearest café, where I ask to purchase a cup of cooking oil. I’m offered a free cup of oil, which I take into the toilets and rinse out the stove.

I then return triumphantly to the check-in desk, where the staff agree there is no longer any smell of petrol. I’m on my way.

During my three week sojourn, the Coleman serves me well. At the youth hostel in Noumea, two days before returning to New Zealand, I again drain the fuel, leave the stove to sit for a day and flush it several times with cooking oil. For good measure, I place the stove in a polythene bag and secure the top with a hair-tie.

Knowing I’ve done everything correctly, I don’t mention to the staff at Noumea Airport that there is a stove in my pack. This is a mistake.

I am reading a French comic in the souvenir shop when I hear “Olsen, Maxwell to check-in desk 24” over the loud speaker. Knowing what’s up, I trot off to the desk brandishing the Air New Zealand form given to me in Dunedin. I am led to the baggage loading and sorting zone where I am frisked and taken to a desk where I have to open the pack for several security staff. I pull out the polythene bag and show them how well sealed it is. Unsatisfied, the bag is opened and the petrol-sniffing begins, although there is no significant smell of petrol. A superior with an Air New Zealand badge is called in just to verify.

He sniffs the stove, now sticky from vegetable oil spilt over it during cleaning, and declares: “C’est bon pour moi.” He also says that the form I am carrying is fine.

At Auckland, I go through the usual tramper’s rigmarole of ticking all of the biohazard boxes and having my tent and boots fumigated and then continue to the domestic terminal for my flight back to Dunedin. But my stove dramas are far from over.

I tell the woman supervising the baggage drop that I have a camping stove in approved packaging. I desperately hope she will accept the form I show her, but she takes me and my pack to her supervisor who asks to see the stove. I let out a small whimper of despair and show her the form, but receive a firm: “No, I need to see it.”

I show her the stove in the clear polythene bag. She tells me to open it, smells the stove, looks perplexed, then disappears only to return with another person, who is unhelpful in the extreme. With a distasteful expression, this lady says she can smell petrol on the stove and says: “Actually, you’re not allowed to take these on the plane at all.”

I explain, politely, that I have just flown to New Caledonia and back with the stove. I also show her the form provided to me by Air New Zealand. The form is ignored.

“No, they’re not allowed,” she repeats. “Anything that’s contained fuel is prohibited.”

I mention it has already been approved to fly by Air New Zealand staff at three separate airports.

“Well, it shouldn’t have been,” she responds. “I just did a dangerous goods course, and they’re not allowed.”

She taps her Dangerous Goods badge. Clearly, she is someone to be taken seriously.

I enquire as to why it is that Air New Zealand produces a form stipulating how to prepare a stove for flying if they are, in fact, completely forbidden.

I say that I understand, and that I am sure Air New Zealand will be willing to post the stove to my Dunedin address, given it’s the airline’s fault the stove is in Auckland in the first place.

“No, we won’t post it,” she says, taking the stove and form to discuss the situation with several other people.

It takes a full 10 minutes before the Dangerous Goods lady emerges with the stove and a computer print-out of a form identical to that which I had been given in Dunedin.

“Apparently. But your stove still smells of fuel, so you can’t take it on the plane.”

“But I can just flush it with more cooking oil. I can get some from a café.”

“No,” she replies helpfully. “You need to drain it for six hours after flushing it.”

I point out that the form says nothing of the sort. She grudgingly agrees.

I buy half a cup of oil for $1.47 from a sandwich bar, head to the toilets and again flush out the stove with cooking oil. The man using the basin next to mine cheerfully asks whether I’m getting my bomb ready.

I emerge just in time to be reprimanded for leaving my trolley unattended and return to the check-in area. The Dangerous Goods lady sniffs the stove. I wait with baited breath until she tells me it’s fine. “But we’ll double-bag it,” she adds, keen to get in the last word.

Two polythene bags and cable-ties later, the stove is back in my pack and on its way to the plane and I am seriously considering not taking my stove travelling with me in the future. 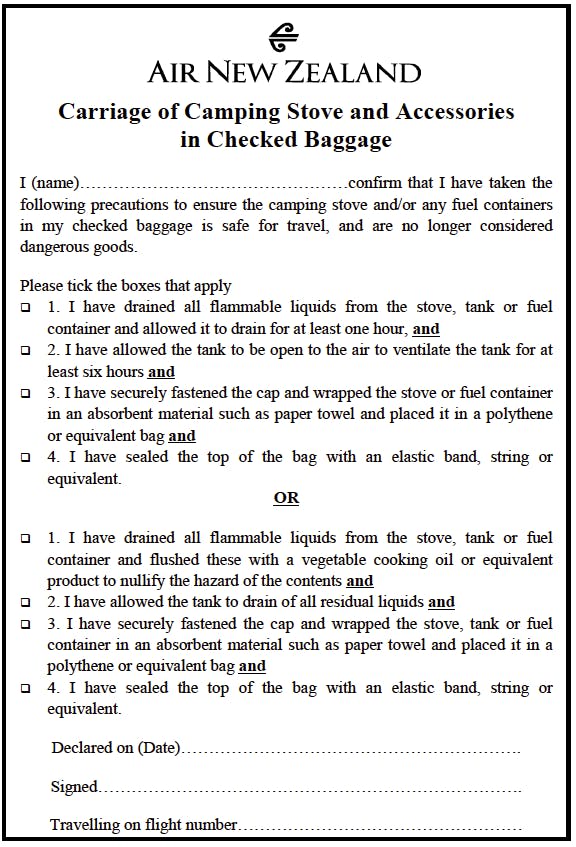 If you want to take your stove on the plane

There are two options for making your stove fit for flying on Air New Zealand. However, if even the slightest smell of fuel remains after completing Option A, you will almost certainly have to use Option B. The bag will be opened and the stove will be smelt by security staff.