David Caudwell plunges into the mangled slopes of the Douglas Range to discover how disorientation, despair and anger can be used not only to forge stronger paths on the trail, but also in everyday, suburban life.

It’s been over three hours since I last saw a cairn.

My mind replays the small snowgrass plain where the route could have branched off anywhere. I’m certain that’s where I went wrong, but now I’ve over-committed. Bushes molest my face. Branches poke, scratch and jab from all angles. The slope on which I’m walking, littered with slippery pandani fronds, continually forces my ankles at awkward angles.

I’ve come to Kahurangi National Park to re-tune myself, to test my mettle with map and compass, and see how I cope with the psychological intensity of way-finding through off-track terrain. And right now, languishing somewhere beneath the towering buttress of the Dragons Teeth, I’m a little more immersed than I’d bargained for.

This is what I wanted, but now I’m resisting the experience. I’d rather be somewhere else. Suddenly, everything seems a little too real.

I hear what could be a river. Or is it just the wind rustling leaves?

I’m too high so head downward, sliding slickly down mossy chutes. Reaching for the map to double-check I’m heading towards a river, I find it’s gone.

A sadomasochistic part of me wanted to be utterly lost on this 11-day wilderness tramp. But now, panic permeates on a late afternoon sunbeam. I’m angry that I didn’t look harder for the next cairn, that I was impatient and too cocky to think I could forge a way through the melange.

Where have I just come from? Everything looks the same.

I turn around and backtrack. Curse. Clamber. Swear. Scratch my head furiously.

Fifteen minutes. Anxiety’s boiling. I clasp my hands into prayer position, earnestly summoning my lost map. Amazingly it works. I spot it upon opening my eyes. 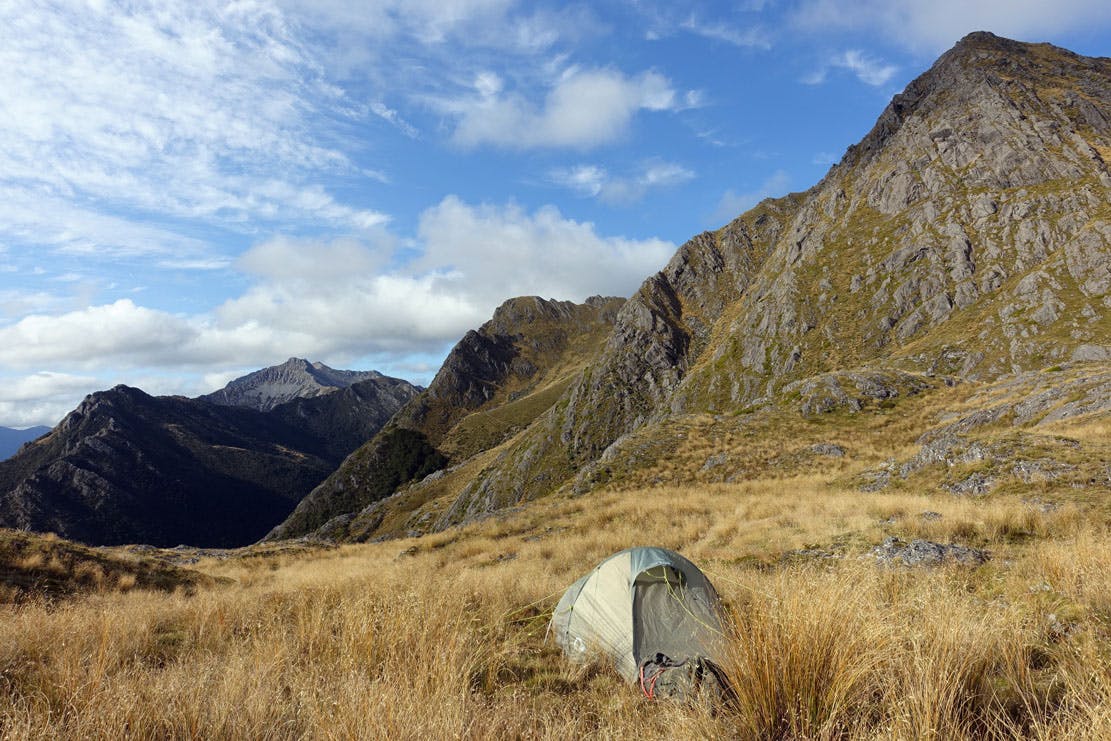 Finally, the trees relent and there’s a river. Next to it is a cairn. I’ve inadvertently stumbled back onto the ‘path’. But it’s not long until it vanishes again. Huge moss-covered boulders lay strewn everywhere. Half an hour is wasted roaming around in circles, confounded by a mossy maze, trying to find somebody else’s path. I need to trust my instincts and tune into that innate sense of direction. The river is a chaperone and signpost.

The bank is cluttered with foliage and slippery rocks, but by sticking to it I eventually find a way through. And, amazingly in this terrain, there’s a flat patch of ground just big enough for the tent.

The next day it’s again in the bowels of bush-bashing bastardry. Every step is arduous, a battle to break free of barbaric branches. My temper is boiling again, but I channel my anger into propelling my arms and legs through the clutter.

A branch lashes my eyeball. Vision blurs. Optimism wanes. It begins to feel like I’ll never get out.

What if I believe every step forward is strengthening rather than draining? What if I strip the anger of its emotional charge and vanquish the belief that dying is a bad thing? Not that I want to die out here, but perhaps death is simply the evolution of an immortal soul. Even if it’s not, just thinking so fills me with hope. So I utter it like a mantra with every footstep and every branch swipe. Slowly the angry haze lifts. My peripheral vision sharpens: there, a small gap through the trees and a trickling sound. 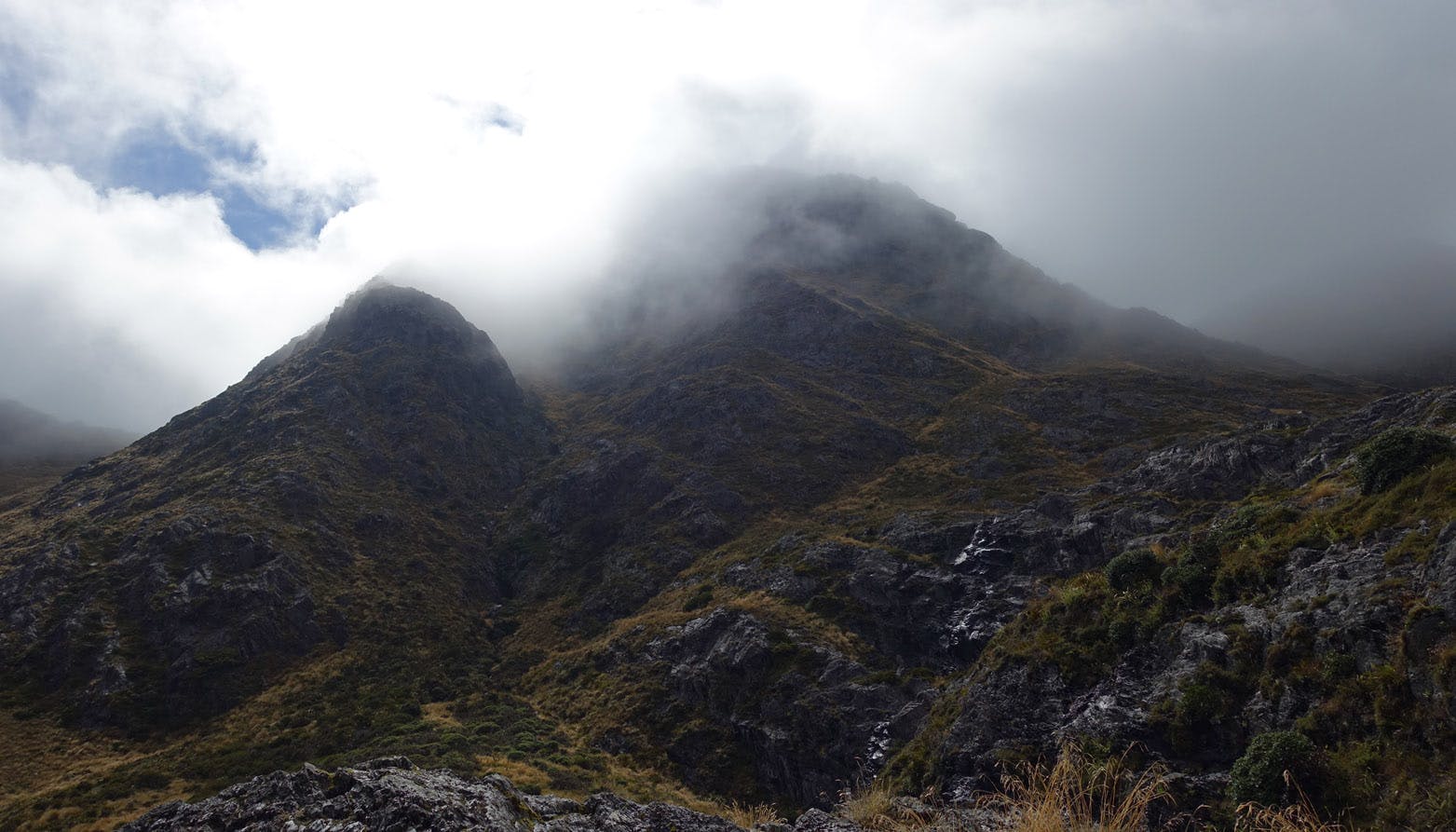 Morning mist clears from the sharp summit of The Needle. Photo: David Caudwell

It’s a creek, a small creek and a much more direct route to Anatoki Peak.

I climb most of the way up the mountain using the creek. Finally the bush relents, turns to tussock. It’s been five hours of solid bashing, and so I set up camp just beneath the ridge. There aren’t many flat spots, but there’s a small pool.

A pattern emerges over the 11 days: lose ‘path’, scout aimlessly, get impatient, set a compass bearing, bush bash, and then, when I’ve given up needing to find the track, it appears.

I sniff along animal trails.

Head-high tussock plains engulf me. My legs drop down sporadic, soggy holes. Distant bird calls ricochet off valley walls. I weave through the saddle of the Needle’s Eye and stumble past the Drunken Sailors, bathe in Lonely Lake and feel part of everything. I camp on ridge tops beneath moon and stars and end up in places where few people would have ever contemplated their existence, while frantically chewing dried mangoes.

Some days my walking speed is less than 500m an hour.

Some days I marvel in mountain mist.

Such wild disorientation is reactivating a survival gene. I begin to realise that what’s important is not how far I walk, but how I connect with a place.

This tramp has challenged and been challenging, but I’ll emerge with more confidence and purpose that can be taken into everyday life. Forging my own path when all hope seems lost is how I want to walk through life from now on. I vowed to do that while sitting in a mystical arena of rocky cathedrals, each mountain summit a holy pinnacle.