With its start and finish separated by more than 450km of winding roads, the Heaphy Track poses a logistics problem for riders and trampers: how to get back to their vehicle? John Mason helps by relocating cars from one end to the other – and then rides back, via the track. Here, he shares a typical day’s work.

Before I get in the car, I have a careful look around for any dings or scrapes, and, if so, I’ll take a video so there’s no doubt they were there prior to the trip. Today, though it’s a brand new, high spec SUV with all sorts of electronic wizardry. I spend a few minutes familiarising myself with the wipers, lights and handbrake before carefully driving out of the car park.

Back in Takaka I load my bike on the bike rack, put my gear in the back seat and head for Murchison.

A quick leg stretch here, a cup of coffee and a look around the secondhand shop then I’m off to Westport for the night, where it’s cold and raining. I wonder how the group from the car would have enjoyed the trip across the Downs today. It’s forecast fine for tomorrow.

I’m out the door by 6am and arrive at the Kohaihai car park (the track’s end) just before eight o’clock. It’s fine and cool, ideal for riding. A text to the car’s owner to let him know all’s well and I’m on my bike. First is the ride over Kohaihai Bluff. It’s short and steep and by the top I’m breathing heavily, my body still adjusting to two hours sitting in a vehicle.

Down the other side it’s easier. The track up the coast is a series of beaches with climbs over low headlands. Maintaining it here is a constant battle against the weather and sea and in many places the track follows the top of the beach. Riding through sand is hard,  so I get off and walk. I don’t want any sand on my chain, gears or brake discs. Sand, water and oil quickly turn into grinding paste that can ruin chains and gear rings very quickly.

Past Katipo Shelter, it’s easier. I pass picturesque groves of nīkau and soon reach the gentle downhill to Heaphy Hut. It’s taken two hours and it’s time for a brew. The group from the car arrives soon after. They’ve had a great trip, despite the crappy weather on the Downs.

After a short chat, I head up the river towards Lewis Hut. This is easy riding with only one steep section. There are two spectacular swingbridges and I stop on each looking for deer marks in the sand below.

I also stop at Lewis to have another brew and food before the long climb up to McKay Hut. Although it’s old and tired, I’ve got a soft spot for Lewis. I’ve had some good nights here and I hope the rumours that it may be demolished and replaced with a shelter, aren’t true. 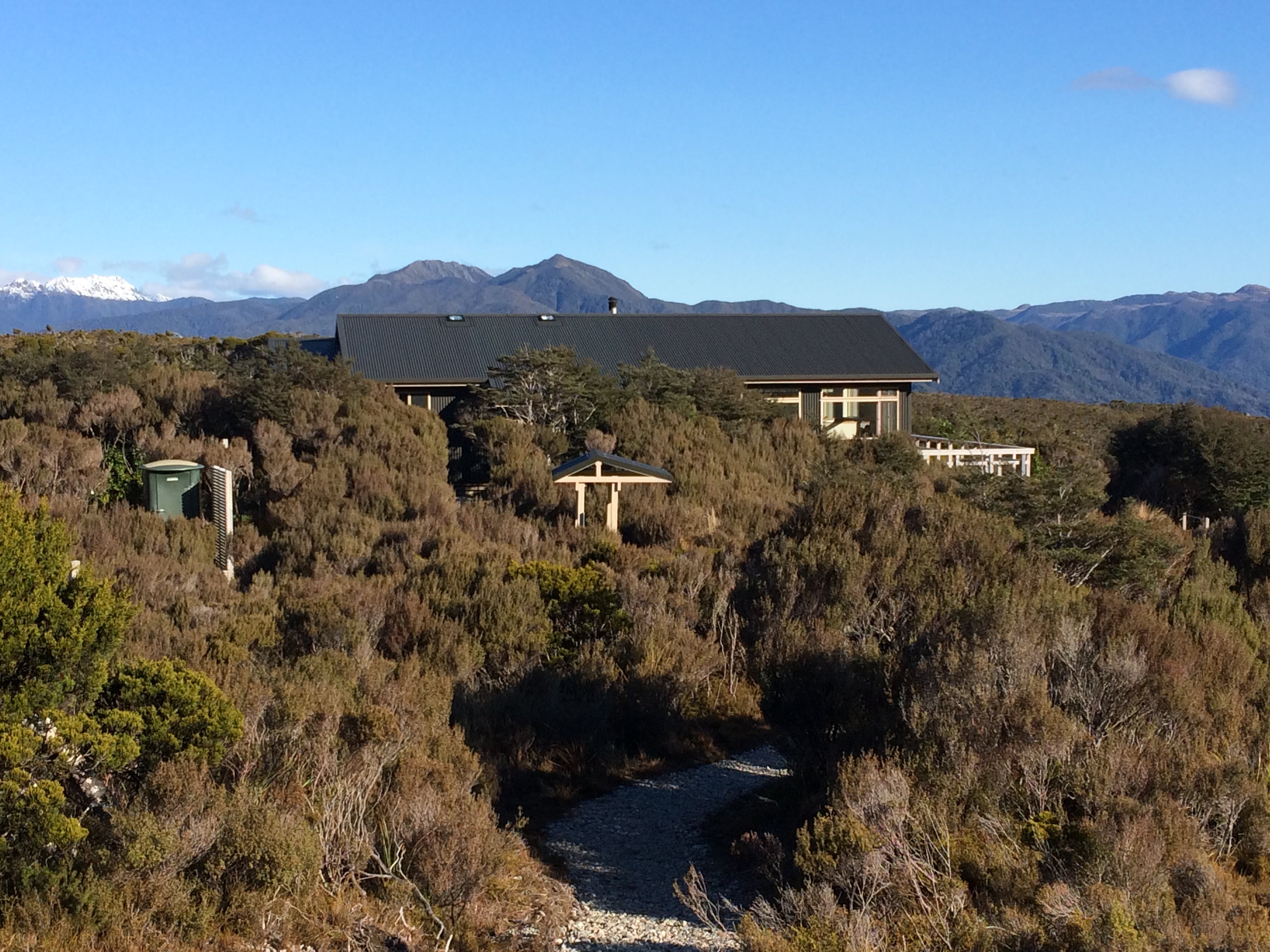 Then, it’s the long climb to McKay. No matter which way you ride the Heaphy, you can’t avoid this climb, but a recent upgrade to the track surface means,  I think, that this is the easier direction. Pedalling along, I realise I’m seeing a lot more weka than usual. They seem to be making a real comeback throughout Kahurangi.

After 90 minutes, the grade eases slightly and soon McKay Hut comes into view. It’s taken me two-and-a-half hours, bang on my benchmark time. At this stage of my life, I’ve given up trying to get faster.  Not getting any slower is good enough for me.

A cold gusty easterly is blowing but McKay Hut has been warmed by the sun. While having a brew, I contemplate whether to press on to Saxon Hut. It’s only another 90 minutes, but I’m feeling a little tired so decide to stay put.

A person at Heaphy Hut had said the fire at McKay wasn’t drawing properly.  There’s a thick build-up of ash on the grate which is hard to move, but I scrape it out and soon have the fire roaring.  It doesn’t have much effect on the temperature though and I decide the easiest way to get warm is to go to bed.

I’m out the door at 7.30 and heading for Saxon Hut. The weather’s fine. With vehicle relocations, you have to go whatever the weather and I don’t enjoy riding in the rain. The cold easterly is still blowing.  There’s ice on sheltered puddles. I’m wearing fingerless gloves but my fingers soon get too cold to properly change gear. This is my favourite section of the entire track; a good surface with easy grades, some boardwalk sections and plenty of corners to keep it interesting.

I pass the boundary seat, marking the border between the Tasman and West Coast districts, and the track surface becomes noticeably rockier. There are signs of takahē browsing, pieces of grass and tussock is strewn across the track. I ride down the rocky section through the beech forest, across the tussock flat, up the other side to Saxon Hut.

Entering the hut is like walking into a deep freeze. There’s a biker inside who’s just about to leave and he asks me to wait outside while he changes into his riding gear. I was thinking about spending the day here and walking along the Slate Range but the weather makes me reconsider. It will be bitterly cold on the tops: I’ll leave it for another day. After a brew and a bite to eat it’s off to Gouland Downs Hut. 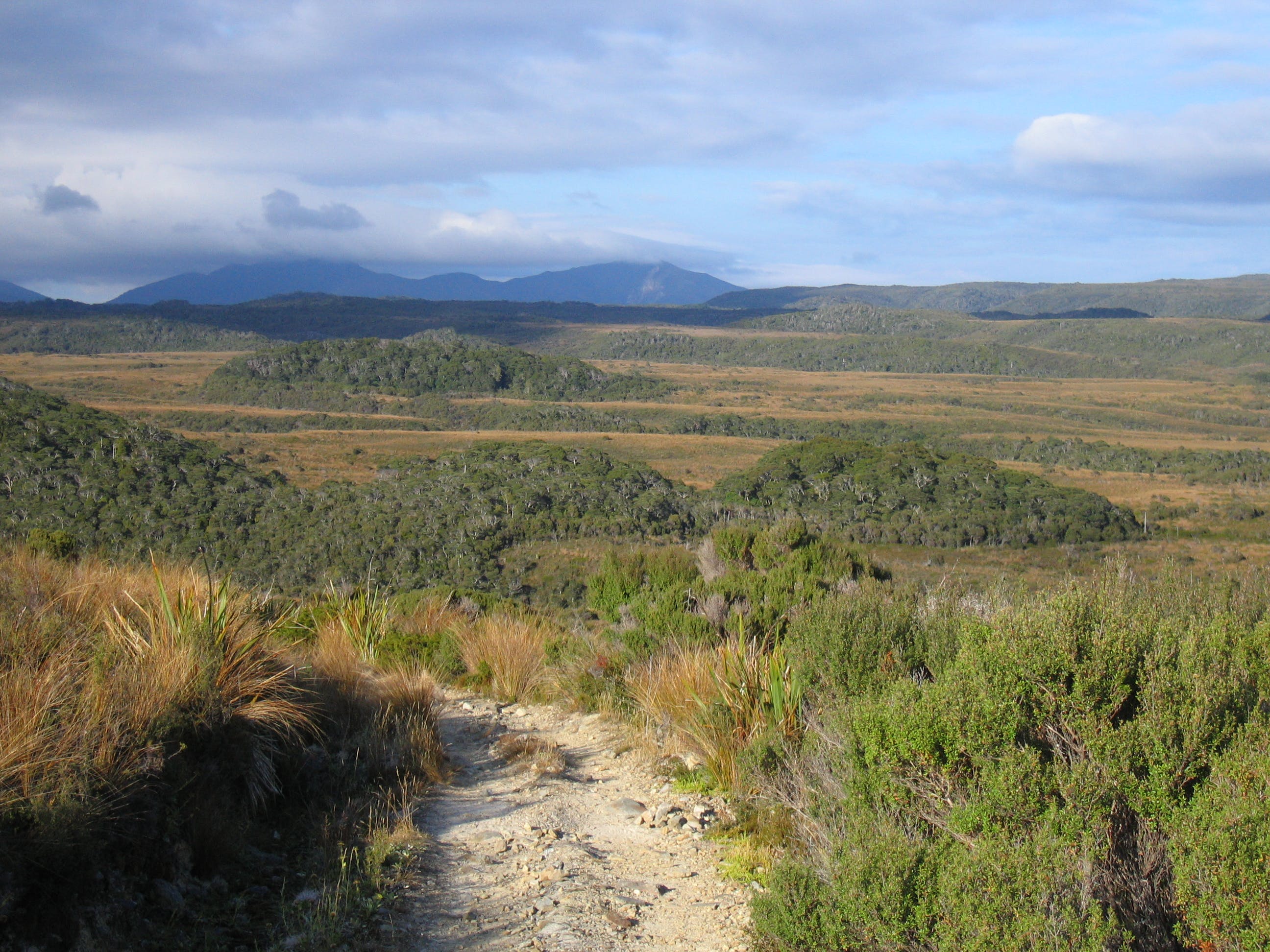 View across the Gouland Downs - not a bad place for an office.[/caption]

It’s mainly downhill to Gouland with a couple of small bridges to cross before bumping over the limestone into the goblin forest. At the hut are two takahē grazing on the front lawn. It’s a great opportunity for a photo, but just as I’m about the press the shutter, people arrive and the birds run for cover. It’s DOC rangers John and Joe from Takaka, up here for a few days’ work. We chat but they’ve got things to do so I start the journey towards Perry Saddle. It’s mainly uphill and quite rocky in places. The main feature of this section is the boot pole which can be festooned with footwear ranging from skates to ballet shoes.

Next stop is at the aptly named ‘picnic table corner’ that has a great view over the Downs. Then it’s a steady climb to Perry Saddle Hut.

The next section to Flanagans Corner is my least favourite. Although it’s not far or particularly steep, parts of it are extremely rocky and difficult to ride. A few years ago, one of my riding companions was catapulted down a bank when her bike was stopped dead by a big rock. I’m cautious and get off and walk in some bits.

These rocky sections can be tough on bikes. I’ve seen smashed derailleurs, broken seat posts, snapped chains. One rider told me he’d seen a bike frame break in half. It pays to ride carefully.

Flanagans Corner to Brown Hut is one long exhilarating downhill. The track is rocky at the start but progressively improves. I’m finding the top section difficult to ride today then I realise I’ve got too much air pressure in my back shock. Reducing it by a few pounds softens the bumps immediately. Below Shakespeare Track, the rocky surface smoothes out for a quick descent to Brown Hut with only one stop to appreciate the view of Mt Olympus.

I pass the hut and soon reach the car park.

My cycle computer has recorded 9.5hr  riding time and it’s been a good trip. It didn’t rain, I didn’t fall off and my bike didn’t suffer any damage. I can’t ask for more than that.