After battling a kauri killing disease for more than four years, Auckland’s biodiversity rangers have finally found an ally who walks the corridors of power

Take a walk in a kauri forest today and you’ll be walking through some of the most diverse bush in the country. Where there are kauri, there are also around 60 other flora species – more than in any other comparable forest in the country. Kauri truly are lords of the forest.

But for how much longer? Kauri are facing what Auckland Council biodiversity liaison officer Stacey Hills admits could be an extinction event. From Northland to Auckland, kauri are dying and while the cause is known, little else is understood about a disease felling the giants of New Zealand’s forests.

What little is known about PTA isn’t encouraging. There is no cure. Humans are the main vectors, carrying PTA spores in dirty footwear. PTA can lie dormant in soil for at least four years. There could be dozens, hundreds or thousands of trees affected, but not yet exhibiting signs of the disease. No kauri is yet known to have a natural defence against the disease.

Twyford has seized on kauri dieback, hoping to shame the government into funding more research into the disease. He has mooted getting Colin ‘Pine Tree’ Meads to front an awareness campaign – “I reckon he would be fantastic” – and wants to see funding into researching PTA doubled from five million over five years, to $10 million.

“My view is if we are serious about trying to check the spread of the disease we should be ramping it up,” Twyford says. “I would like to see spending double. Let’s get serious about this.”

Despite the political brinkmanship such political stunts as walking 70km through the Waitakere Ranges inevitable involves, Twyford is dead serious about doing more to combat the spread of PTA. It takes commitment to tramp 70km along some of the Waitakere’s toughest and roughest tracks. Few politicians would have that kind of fitness – or the stomach to spend six days in the middle of summer carrying a pack up and down steep ridges.

Twyford describes himself as a “brand new Westie” because he’s only been the Te Atatu MP for two years – and says that while walking the Hillary Trail is primarily about promoting the campaign against kauri dieback, it’s also “a bit of a pilgrimage to the Waitakeres”.

“I’m really staggered by what an extraordinary wilderness it is right on our back step. As a coastal walk, the views from the Omanawanui Track [are] the equal of almost any coastal walk I’ve done here or overseas.”

Wilderness joined Twyford on the fifth day of his Hillary Trail hike, from Anawhata to Te Henga. We had arranged to meet at 10am at Craw Campground, but when I arrived Twyford was on the phone, being interviewed by student radio bFM. In the preceding days he had been interviewed by TV and print news outlets. Raising awareness for a disease that hasn’t quite caught the public’s imagination. 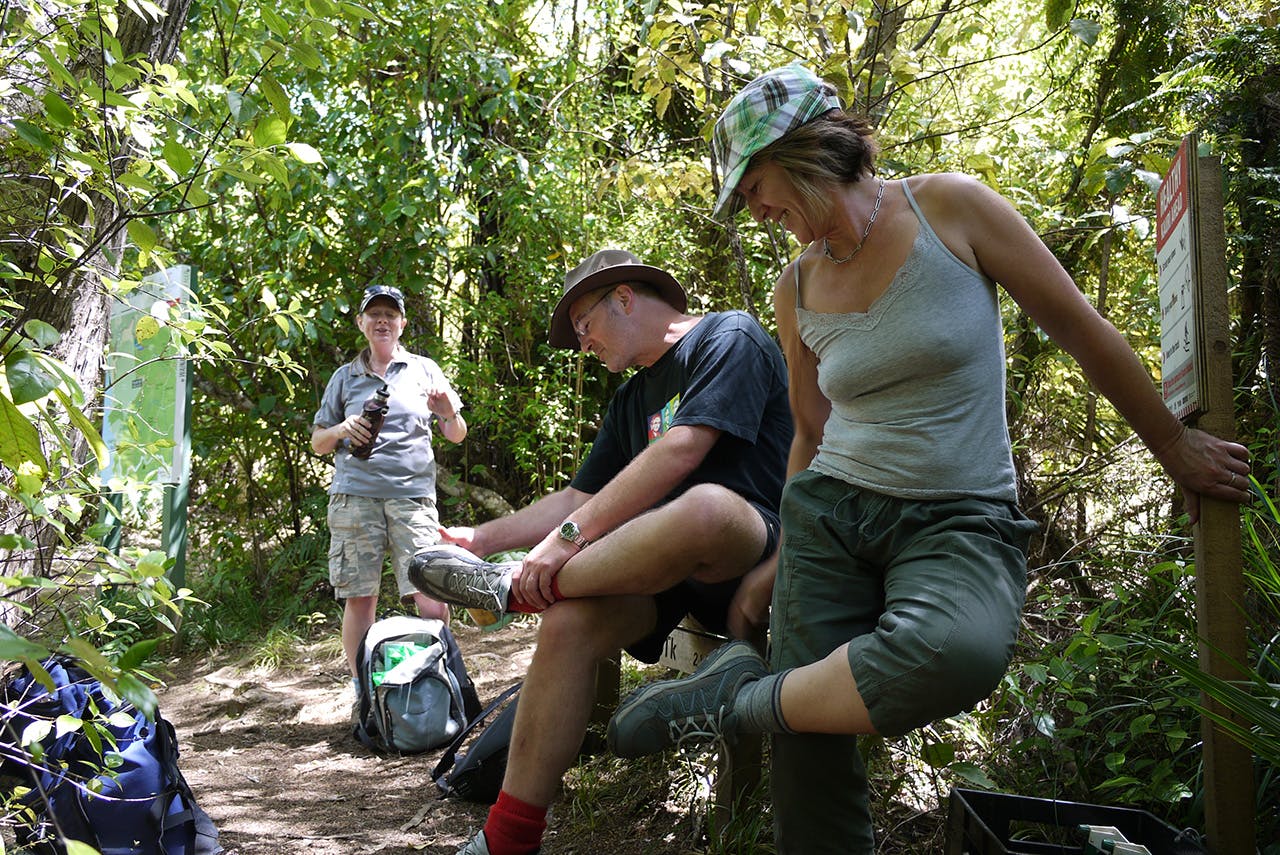 When we start walking, Twyford quickly shares his experience of the Hillary Trail. “It’s promoted as a four day walk but about 0.2 per cent of the population can probably do it in four days comfortable,” he says. “For most people that’s just not comfortable.”

He’s got some strong views on the trail, which has been criticised for being too tough. The start of the trail, Hamilton Track, in particular is notoriously muddy and off-putting. The Auckland council is in the process of realigning the track and installing boardwalks. While purists say this move is anti-Hillary (the man personified as overcoming tough obstacles and challenges), others say it will increase the number of people using the trail.

“To develop [the Hillary Trail] appeals to me but kauri dieback throws a whole question mark over that debate,” he says. “Until we have a much clearer idea about how best to manage the disease and limit its impact and spread, until we are willing to invest serious resources in infrastructure and keep people out of the areas that are not infected [with PTA] and until we’re prepared to improve the standard of the track so that it’s not so muddy and people are not dragging such large quantities of mud on their boots, it doesn’t make any sense to increase the number of people using the track.

“Maybe, through good policy – science-based policy – and investing properly in the infrastructure and upgrading the tracks, you can do both: protect the kauri and open the trail to a much bigger public. But it would be silly to open it up to much bigger volumes of people until we have resolved those questions around kauri dieback.”

Plenty of questions remain and unless more money from government is made available answers will remain elusive. Nick Waipara, principal biosecurity advisor with Auckland Council, has identified three areas of research that need to be funded: the ecological impacts of kauri dying en masse, investigating control tools that can be used to fight the spread of the disease and, most importantly, genetic testing to determine how many kauri are susceptible to the disease.

He accepts $5million is a substantial amount of funding, but says unless more money is given at the next funding cycle in 2013, progress on finding a cure or determining the extent of the threat to kauri PTA poses is impossible.

“I would push for more because a lot of our work in the first five years was nutting out how do you detect it,” Waipara says. “Back in 2009, we didn’t even know how to positively identify it from soil.

The genetic work is the most vital because scientists are still hopeful they will discover kauri with a natural resistance to PTA. It could be that a minority of trees is vulnerable. If that is the case, says Waipara, evolution will sort it out. But if resistance is low – as is the case with similar phytophthora’s in other parts of the world – we’ve got a problem. “That’s where I would justify to you we’ve got some big ticket items of research that need funding.”

Waipara estimates at least $7million will be needed.

Twyford can’t believe the government hasn’t spent more on doing this crucial research. “We spent $85million on painted apple moth which was a threat to pine trees,” he says. “This may not be something like kiwi fruit or pinus radiata where you can easily put dollars and cents on it, nevertheless it is something that New Zealanders feel deeply about and care about. It’s part of our heritage.

“I think the other thing that is really important for this issue is that kauri is regarded as a taonga, not just by Maori but by all New Zealanders, and it would be really like the kiwi becoming extinct.”

With emotive language like that, Twyford is promising to turn up the heat on the government and hold it to account for the decisions it makes – or doesn’t make.

“The strong sense I have is that the only prospect we have of stopping the disease and managing its impact is through good science, otherwise we’re really in the dark. Without good science and understanding what’s going on you might as well give up.”

Its not just the future of kauri at stake. Recreational opportunities within areas where kauri are present – like the Waitakere Ranges Regional Park and Hunua Ranges Regional Park – are under threat. Already tracks have been closed in both parks to ensure healthy stands of kauri remain free of PTA. How long they remain closed depends entirely on whether scientists like Nick Waipara can curtail the spread of kauri dieback. If getting funding for that research is reliant on politicians like Phil Twyford, then things might finally be looking up.