Kiwi Ranger is a programme designed to connect kids with nature. Edith Leigh finds her inner child and discovers a new forest perfume and some unexplainable brown goo

Have you ever tasted honey dew in Nelson Lakes National Park?

Aoraki/Mt Cook National Park is the perfect place to lie back and draw the different types and shapes of clouds in the sky, before having a go at forecasting the weather for the next day.

You could write a poem by describing shapes, colours, sounds and smells in the cloud forest at Dunedin’s Orokonui Ecosanctuary.

Or become a historical detective at Denniston Historic Reserve and decide whether sword fighting with icicles or sliding down a hill on sledges made from old beer barrels would have been more fun 125 years ago before inventing your own game that re-uses old stuff around you today.

These are just some of the activities children are trying out as they explore and experience the outdoors through the Kiwi Ranger programme.

Aimed at children, from three to 103-years-old, each Kiwi Ranger site has its own booklet full of fun activities and walks to do in that area. Completing the activities earns everyone a badge, which is unique to each area, and the title of Kiwi Ranger.

The founders of the programme, Mick Abbott and Carli Richter, are both keen outdoors people and conservationists. Abbott says the disconnection a lot of kids have with nature these days is “pretty well known”.

“It’s about trying to switch on young New Zealanders that this country is an amazing place,” he says. “How do we make these places matter to kids, as they are the future custodians?

“For people who don’t know the outdoors and natural environment very well, things can seem the same – once you’ve seen one waterfall you’ve seen them all.”

But, every place is unique and interesting, and the more you get to know it, the more interesting it becomes, Abbott says.

The “germ of an idea” for the Kiwi Ranger programme was born during a sabbatical researching visitor experiences in national parks in North America.

Richter explains that travelling with three children, then aged two, six and seven-years-old, they spent a lot of time doing the United States Junior Ranger programmes. “It was just such a rich experience. We all still talk about things we learned.”

The couple began to think it would be great to have something comparable back home. When they returned to New Zealand two years ago, Abbott managed to get funding from the University of Otago and the Otago Institute of Design to pilot a similar interactive programme here.

“From that we managed to get three sites up and running.”

Since then the Department of Conservation has come on board providing support and help to develop more sites.

There are now 10 Kiwi Ranger sites in the South Island and the programme is being expanded to the North Island, with the first two northern booklets expected to be ready by Easter.

Research shows that childhood experiences with nature play a critical role in determining life attitudes, knowledge and behaviour towards the environment. The department wants to tune children – tomorrow’s leaders and decision-makers – into conservation values, Mankelow says.

A lot of DOCs work with children is focused on schools, but the great thing about Kiwi Ranger is the way it engages families. 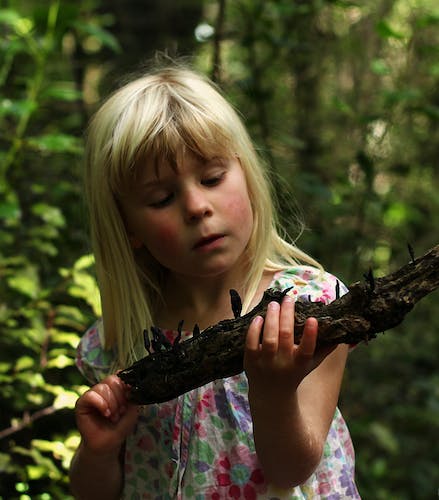 Admiring a black fungi while on a treasure hunt for a Kiwi Ranger activity. Photo: Edith Leigh

Families can just come in, pick up a booklet and away they go, Mankelow says. The booklets are designed to be self-directed. “Parents have a very important role as first teachers, and with Kiwi Ranger, children and families are learning alongside each other.”

Mankelow has come across families in Arthur’s Pass where a father and son had come back for a second weekend in a row to complete the Kiwi Ranger booklet, and another where a daughter had gained her Kiwi Ranger badge at Aoraki/Mt Cook and then persuaded her initially reluctant father to visit another national park.

Mankelow has completed the Arthur’s Pass Kiwi Ranger booklet with her own two children. When her seven-year-old son saw the other badges, he said “I want to get that one next” and managed to talk her into taking their next holiday at Nelson Lakes National Park.

The Kiwi Ranger activities encourage kids to “look around, feel the moss and count how many birds they see”, Mankelow says. “They actually stop and take much more notice of what’s going on around them, rather than being the first to get to the waterfall.

“We were at Nelson Lakes in July. It was freezing cold, but my son sat beside the lake for 15 minutes, completely absorbed in recording all the sounds he heard. He would have stayed there all day if I let him.”

Richter and Abbott say “using the senses to really connect with nature” is something they try to bring into the booklets.

They want their activities to be an experience and not just about knowledge.

Adds Richter: “We’re not out to create botanists and entomologists. It is so they can get inspired and find out more.”

When researching a new site, the couple often bring their own children along with them, who will be quick to tell them if an activity is boring.

“They keep us honest and they come up with great ideas, too,” says Abbott.

With all this talk about experiences and inspiration, I decide to head out with my two-year-old daughter Anika and four-year-old niece, Tess, to try out a Kiwi Ranger site.

The Orokonui Ecosanctuary is just up the road and one of those places I kept meaning to visit, but just never seemed to get around to actually doing.

I leaf through the booklet looking for activities suitable for a couple of pre-schoolers and decide to start with a treasure hunt. I hand each girl a page showing all the treasure they need to find and we’re off. No need to even mention the word walk.

We stop briefly to run our fingers across a crusty piece of lichen and along the edge of a serrated leaf, before ticking them off on our page.

Next on our list is a bird feeder, some fungi and a spiderweb.

It’s actually the two-year-old who spots a spider web first, a tangled mess woven between two roots. Now that her eye is in we have to stop and admire every spider web she sees for the next half hour.

When Tess spies a birdfeeder amongst the trees I hold her up so she can pretend she is a kaka and hop her hand onto the tray. She gives a little squeal of surprise when the lid pops open to reveal its bounty of almonds, cashews and sunflower seeds.

A little further on I manage to persuade the girls to try another activity. We sit down, close our eyes and listen to the forest.

First are the big, obvious sounds, as somewhere above us a tui croaks and a helicopter-like ‘woosh, woosh’ announces a kereru swooping through the trees.

Then we notice a smaller, squeakier ‘pheeet, pheeet’. The bellbirds are nesting and there are lots of baby korimako around.

Taking a deep, relaxing breath I suddenly realise the air is thick with a sweet, intoxicating perfume. The mahoe, or whiteywood, is in flower and I wonder how I have never noticed its overpowering scent before.

Before long, however, the peace is broken with a question.

My eyes scan the ground as we walk back up the hill towards the visitor centre and I spot a fungi I’ve never seen before. It’s red, with flower-shaped tentacles and a blob of brown goo in the middle of it. To me it looks as though it belongs in a tropical jungle or on a coral reef. Not right here, on my back doorstep.

I don’t know what its name is and I can’t explain to a curious four-year-old what the brown goo is.

“We’ll have to do some research,” I say.

The Kiwi Ranger activities might be aimed at kids, but I feel as though I’ve had my eyes opened – and all my other senses awoken as well.

That night in bed, as I reflect on our afternoon, I find myself thinking the next time we’re out walking, or tramping, and we pass a big, pillowy mound of soft moss, or an enticing pool of mud, I’ll bite my tongue.

Instead of saying “no darling, you haven’t got your gumboots on”, I’ll whip her shoes off and encourage her to bounce barefoot in the moss and squish and squelch her toes through the mud.

We’re planning to head north for our holidays. I think I might mention to my husband that I’ve never been to Nelson Lakes National Park before.

I’m quite keen to taste some honeydew myself.