Where to go in winter when the forecast threatens a series of fronts? We decide on Tongariro National Park, which has become something of an annual winter tramping destination for me in recent years. If cold fronts are going to sweep through, you may as well get snowed on rather than rained on. During winter, the Tongariro Northern Circuit has just sufficient altitude to make snow more likely than rain.

At least that’s the theory, but we find ourselves in light drizzle on the walk from the Desert Road car park into the new Waihohonu Hut, built just the year before. Still, it’s easy, flat tramping and when we arrive, the hut is warm and comfortable.

The next morning, we depart Waihohonu with the sun emerging and Ngauruhoe sporting a cloud cap. A steady climb through beech forest leads to open country, almost desolate terrain of the sort that marks out Tongariro’s mountains as some of New Zealand’s most striking landforms. Barren ridges, occasionally pocked by lava bombs, form ribs radiating away from the base of Ngauruhoe, and in the few places where the topography offers scant shelter, spindly subalpine plants eke out a precarious existence.

Like Ngauruhoe, Ruapehu is thinly sheathed in cloud, with snow forming a distinct line about the 1500m contour. There’s a cool wind, ensuring we need coats, but the sun counteracts some of the chill.

Chris Maclean on the track between Waihohonu and Oturere. Photo: Shaun Barnett

We reach Oturere Hut not long before the next front arrives, sending snow flurries and sleet scudding across the sky. It’s not yet sufficiently bleak to prevent us wandering up the Oturere Valley, surely one of the most surreal landscapes in the park. Great lava pillars form sentinels either side of the poled route; some rough creations, others smooth and almost sculptured. Subalpine plants proliferate around Oturere Hut – snow totara, Celmisia, snowberry and Dracophyllum – but further up the valley they become sparser and sparser until eventually just the occasional isolated clump sprouts from the stony soils. I’ve been up here twice before, both times in sunshine, and can say emphatically that mist gives the place a fantastical quality quite superior to any other conditions.

Back at the hut it’s cold and the heating seems not to be working so we retreat to sleeping bags before Geoff discovers that in fact the gas is operational. As the weather outside deteriorates further, we can enjoy the warmth inside. Jock and Susan cook an excellent fish curry and I think back to my early tramping days when burnt rice risotto seemed to be the standard fare. Why did we not cook decent meals, when such good tramping food is possible?

By morning, fresh snow has transformed our surrounds. It’s fine, powdery and dry – the best sort, more like North American snow than the typical wet New Zealand stuff. After the sun shoulders above the easterly cloud, Ngauruhoe materialises as if by magic through the shrouding mist. In places, enough of the lava field remains free of snow to add colour to the scene. It’s an extraordinary morning to be in the hills, every texture starkly outlined by the new snow. As we trudge up-valley, our boots squeaking, we find ourselves too warmly dressed at first. Chris leads steadily, then the next front arrives rather swiftly. Across a flat expanse I watch the others ahead, black stick figures striding through the increasingly monochrome terrain.

By the time we begin the stiff climb to the Emerald Lakes, the wind rises, the cloud drops low again and spindrift begins to fly everywhere, driving horizontally like a living thing. There is nothing Emerald about the lakes: they are partially frozen, grey, almost colourless puddles. Fortunately, the southerly wind drives into our backs, and our hoods mostly protect us from the stinging spindrift. In such conditions, your world shrinks to a small radius of visibility. We trudge on, all of us enjoying the remarkable contrasts the weather is throwing at us.

In one surreal moment, Blue Lake appears through a break in the cloud. With the distorting effect of the mist, its surface seems vast and sun-speckled, almost like an ocean, but before I can pull my camera out the cloud closes in again. By the time I get my camera back into my pack, I’m chilled for the first time and it’s a good reminder that such conditions are not benign. As we begin the descent towards Ketetahi Hut, the sheltering affect of the ridge behind means the front loses some of its force, and we gain glimpses of Lake Rotoaira, and even of Lake Taupo.

Chris comments, somewhat prophetically that ‘Every step closer to Ketetahi is a step closer to a hut where we won’t have to deal with someone out of their depth.’ Popular as the Tongariro Crossing is, I do not expect to see anyone heading into this southerly. 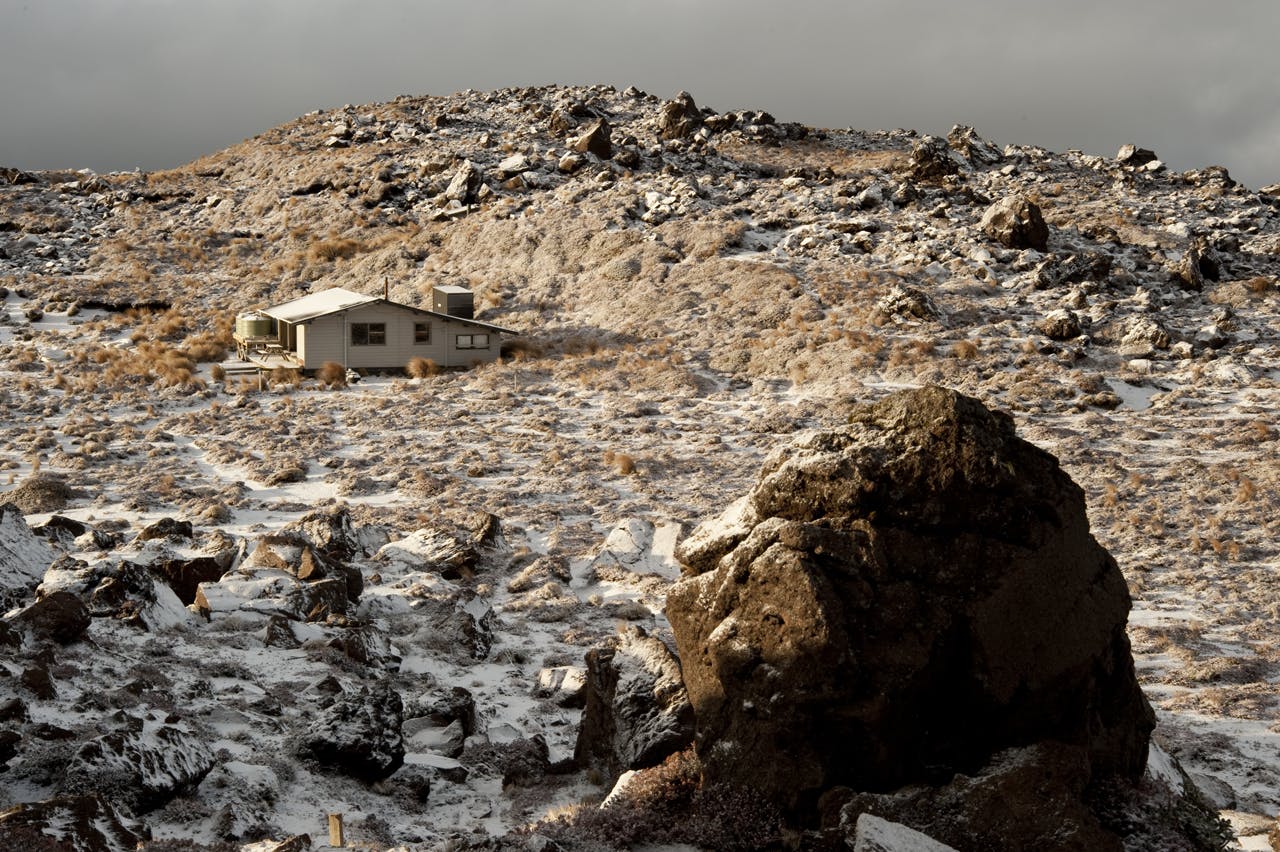 But to my surprise we meet three young women walking the opposite way, none of them wearing proper coats or carrying anything but the smallest day pack. One has a leather jacket, and a satchel slung over her shoulder. We politely try to dissuade them from carrying on, and they assure us they will not go much further.

As we eat lunch and brew coffee at Ketetahi Hut, two of the women return, very distressed at having lost their third companion. Apparently they had thought she was right behind them, only to arrive back at the hut and find she had disappeared. We prepare to head back up to search for her, but fortunately she reappears about 20 minutes later. She storms past the hut without acknowledging anyone, her face a picture of anger.

It turns out none of women know each other, but have met just that morning on the bus that dropped them off for their day trip. No wonder DOC has rebranded the track as the Tongariro ‘Alpine’ Crossing in recent years, hoping to ward off people underestimating the exposed terrain.

Given the right preparation and experience, Tongariro makes an outstanding winter tramping destination. But it’s not a place to be taken too lightly. If you’re heading into a front, you’ve got to front up with the right gear.

From the hut veranda, we can now see the island on Lake Rotoaira, where, Jock tells us, Te Rauparaha hid from pursuers who had hounded him all the way from Kawhia in the 1820s. After he emerged, hidden in a food storage pit on which a woman was sitting, he performed the original Ka Mate haka.

By the time we reach the Ketetahi carpark, the sun has regained is strength, with the front a thing of the past. The three young women are there, seemingly oblivious to how close they came to not seeing the sun again.