Access
Both St Arnaud and Lewis Pass are on highways well serviced by commercial travel operators. Lake Tennyson and the Clarence can be accessed on a rough road from Hanmer Springs.

With eight days to spare and a dodgy forecast hot on her heels, Lorraine John takes the route less travelled from Lewis Pass to St Arnaud

The long walk from Lewis Pass to St Arnaud is one of New Zealand’s classic trans-alpine tramps. The simplest and quickest route follows the St James Walkway in Lewis Pass up and over the dramatic landscape of Waiau Pass, then out via the Travers-Sabine circuit in Nelson Lakes National Park.

With a rain-filled week at our disposal, we had the time to walk a path less travelled as we journeyed through this enchanting corner of the Southern Alps.

Our plan from the start was ambitious. We daydreamed about travelling along the top of the Freyberg Range near Lewis Pass as far as the ridgeline would take us. As the day of our departure dawned, we woke to the reality of the well-trodden St James Walkway: a miserable forecast had nudged us onto a sheltered route. We overnighted at a crowded Ada Pass Hut, the weather thwarting any chance of a glimpse of the high peaks so tantalisingly nearby.

The next morning we woke to find several tents relocated from the now saturated grass to the deck of the hut. After chuckling at their waterlogged occupants, which included one of our number, we set off in the liquid sunshine for Three Tarn Pass. Through the thick clag we could hardly make out the lakes which give the pass its name. However, what glimpse we did manage to get of our surrounds on the approach was striking, with the rusty tussock contrasting against the black and white misty peaks, and the blue, gem-like tarns.

The pass itself was just a tiny gap between two crumbly rock towers, marked by a little cairn which amterialised suddenly out of the haze. 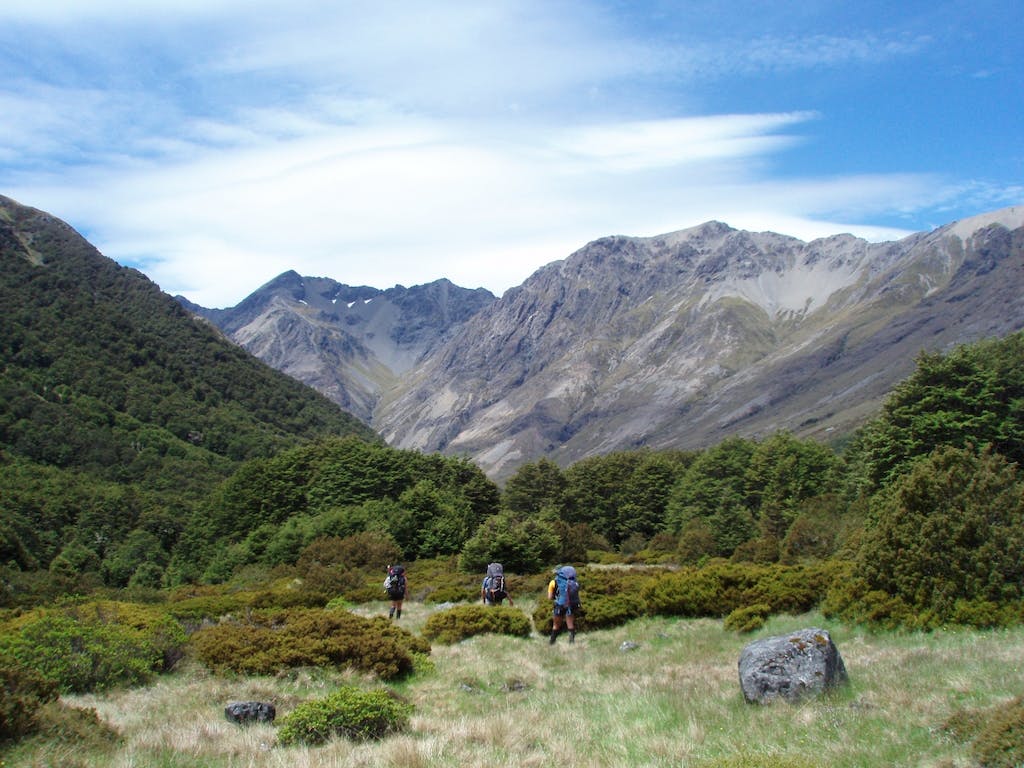 From there we scuttled down the true left of the west branch of the swollen Matakitaki River. We reached the river flats soaked, but the rain had ceased and we were finally able to cross the river and head for Bob’s Hut. Although the snow had long retreated to only the highest elevations, a massive avalanche path came right down to us, still banked up with snow.

Not far from our destination, however, a thunderous sound registered above our conversation, quickly drowning out our words and any lingering expectations of a warm fire in a cosy hut that night. Around the bend we were confronted by a frothing torrent which was pounding over the terrain between us and the next, tantalisingly close, orange track marker. A quick check of the map revealed this ‘sidestream’ to be the confluence of two channels of water, one of which was coming directly off Fairie Queene. It was snowmelt, rather than rain, that spelt the end of the day’s adventures – and perhaps, we feared, our trip.

We headed back up the valley to a flat campsite, keenly aware that if it rained again, we were faced with the gloomy prospect of being boxed in on a bit of marshy ground between the stream and the Matakitaki, for as long as it pleased the weather gods.

I awoke during the night to find the problem preying on the mind of at least one of our number as she slept. However, when dawn drew its curtain it was to reveal a cloudless, sunny morning. We left immediately to check out the creek, which was still pumping vigorously enough to set my nerves on edge. The crossing required considerable care, but once done and with smiles spreading across our faces, we tramped on to bag both Bob’s and East Matakitaki Hut. Corrupted by an abundance of sunshine and hut-bagging, and not yet fully dry from the previous day’s deluge, we decided against heading on to camp above the bushline in favour of basking under the warm blue sky.

Late in the afternoon, clouds began to move in en masse from the west. The banked up effect was spectacular, but the message it conveyed was not lost on us. Our mountain radio shortly confirmed that bad weather had, once again, tracked us down.

Sure enough, the next morning we woke to the sound of heavy rain and wind. Resigned to another wet weather pass, we headed for an old track that follows a sidestream up to the bushline. This track is not maintained, but persists due to the foot traffic of climbers heading for nearby Mt Una.

At the edge of the trees we were met by the sight of steep talus slopes which faded into thick, cold mist. In these conditions, as we gingerly picked our way over large and slippery boulders, I had a heightened sense of being in big country. Expansive tussock and large boulderfields stretched out around us, leading through the gloom to Enid Pass with ominous peaks towering over our low spirits.

Shivering, we shot quickly over the icy pass and down the only route that looked viable, conscious of the sound and sight of rockfall nearby. As we sidled a prominent bench above the Waiau, we began to leave the stormy weather behind, inching closer to the warm sun that shone to the east of the Divide. The miserable beauty of the frigid pass was replaced with the majesty of travelling along seemingly endless lush tussock and rock. Everywhere we looked, we could see mountains, with the dry dirt ridges of the Crimea Range in front and the dank, black teeth of the Spenser Mountains lurking behind. Our perseverance was rewarded when we came across a stockpile of beer tucked under a bivy rock along the tops (if you are passing through the grid reference is: BT24 695295). We finally followed the east ridge of Enid Peak down to camp at the river flats. 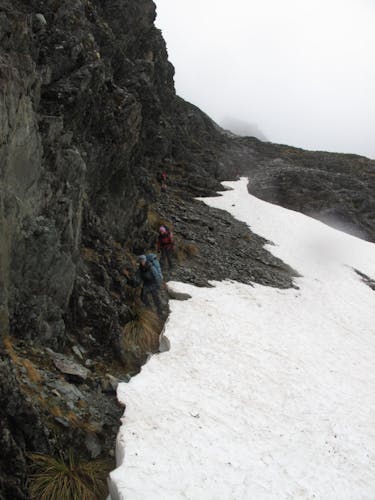 The next day an ominous forecast saw us forsaking a more interesting route into the Clarence in favour of the gentle Maling Pass, under the sweet face of Mt Princess. It felt odd to be walking up a 4WD track after the previous day’s wander through the wilderness. Nearly being run over by an impatient driver while walking around the beach of Lake Tennyson did not enhance this experience.

The usual route leads along the eastern shore, and we came to regret our decision to experiment with the western side when thick matagouri attempted to gauge out our eyes.

In the desolate Clarence Valley, the weather again took a turn for the worse. We decided to camp early under the protection of a large boulderfield to shelter from the biting wind.

We woke to find snow dusting the tops around us and frozen boots outside our tents. We set off up the river in chilly conditions and, not far from the head of the Clarence, climbed a short steep spur providing access to Paske Saddle. The guidebook promises that on the other side of this saddle dwells a place of ‘unexpected beauty’. We were not disappointed. The impressive cirque at the head of the valley, culminating in the pyramid peak of Mt Paske, comes as a welcome surprise to those who saunter in over the bucolic landscape from Rainbow Road.

We continued on down to laze in the sun at Paske Hut. Lenticulars were forming all over the horizon signalling that bad weather was rolling in. But by the time we reached the Rainbow junction that would take us to Begley Hut, the clouds had all blown away. Begley Hut, with its neat view of Cotterell Peak, couldn’t come soon enough after the long grind from the Clarence.

For our final alpine crossing we had a choice between Begley Saddle, which would bring us out above Upper Travers Hut, and a high ridge crossing near Cotterell Peak, leading to John Tait Hut. In the end, no-one wanted to miss the chance to gaze upon the south face of Mt Travers.

Heading back down the valley from the hut, we took a blink-and-you’ll-miss-it remnant of a track which cut the corner to the west branch of the Begley. We followed this in scorching conditions and after a lot more scree and a bit of snow, arrived at Begley Saddle.

After some new country for all of us, the view of old friends from our vantage point was my favourite of the trip. The most impressive was undoubtedly the south face of Travers, directly opposite. To the right was the pyramid-like Cupola, the persisting snowy couloir on Hopeless, and the popular Angelus. To the left, the rusty slabs of mighty Kehu with Franklin, the highest point in Nelson Lakes, rearing up beyond.

In high wind, we quickly found a way off the saddle, though the debris-filled gut that splits the bluffs was rather loose and we had an interesting time riding it down, setting off big rockslides with every step.

We stayed at John Tait Hut and woke to find that bad weather had set in yet again. Rain stalked us all the way down the Travers Valley as we made our way to St Arnaud around Lake Rotoiti’s Lakeside Track.

For a trip that started and finished in the rain, and had very little sun in between, we were pleased to have been able to put our own twist on a classic trip and make the acquaintance of some of the hidden gems of north Canterbury and beyond.