Access
From Cape Palliser Road. The Pinnacles trailhead and DOC campsite are located on the left immediately before a one-lane bridge

The badlands of Wellington

A light rain fell as my boots crunched along the gravel riverbed. Ahead loomed a grey and ominous moonscape filled with towering rock formations. The conglomerate columns were adorned by mushroom-shaped caps, giving them the appearance of alien sentinels. The geological namesake of these columns – hoodoos – seemed to allude to the idea that some dark sorcery had wrought them from the earth.

In reality, these hoodoos are the lingering remnants of a receding ocean that once covered the nearby Aorangi Range. Rain and wind have sculpted the towers over the past 125,000 years, stripping away the softer layers of rock and leaving behind the harder bases and distinctive caps of the hoodoos. The result is the Putangirua Pinnacles, the country’s most striking example of badlands.

Members of North America’s Lakota tribe were the first to give badlands their name, calling the desolate terrain of what is now south-west South Dakota ‘Mako Sica’ – ‘Land Bad’. French fur trappers later referred to the region as ‘les mauvais terres pour traverse’, or ‘bad lands through which to travel’. The most famous formations are located in the western United States and Canada, but New Zealand trampers interested in experiencing a badlands track need look no further than a couple of hours south-east of Wellington.

The Pinnacles are located near the outlet of Putangirua Stream, an easy walk inland from Palliser Bay. The track, which begins at a popular DOC campsite, wanders through tall flax along the stream bed before splitting in two. Walkers can take the left fork and continue through the bush to a ridge overlooking the Pinnacles, or head right and follow the stream to the base of the formations.

I chose to keep right, picking my way along the gravel bed until it took a sharp northward bend and began to climb. Around the bend was my first true view of the Pinnacles. A towering forest of formations arising from the river corridor, with many pinnacles attaining heights of over 50m. They are formidable, but also fragile. The landscape is littered with rocks – from innumerable small stones to car-sized boulders – that speaks of the slow yet unremitting erosion of the hoodoos.

At the base of the formations, I noticed that what had at first appeared to be a solid mass of rock was a complicated labyrinth of passageways. The paths, carved mostly by rainwater and flattened by the boots of other trampers, winds upwards and inwards towards the cliff sides from which the hoodoos had been born. The paths grow increasingly steep and narrow, eventually becoming too thin to squeeze through. Yet I could see they kept going, pencil-thin passages that followed the path of water out of the heart of the hills.

The sun came out as I descended from the labyrinth, picking my way carefully over the rain-specked rocks. Back on the main channel between the hoodoos, I met a group of walkers sitting on river stones and admiring the towers. One of them hailed me.

I agreed. It’s an adjective that seemed particularly relevant. The badlands may have proved unfavourable to early explorers, but this easy day walk showcases them at their best. 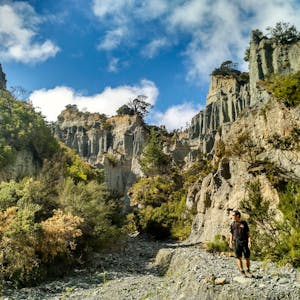 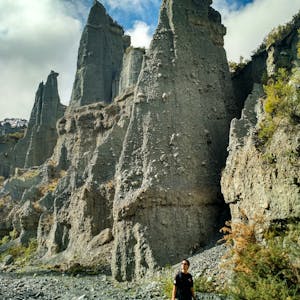 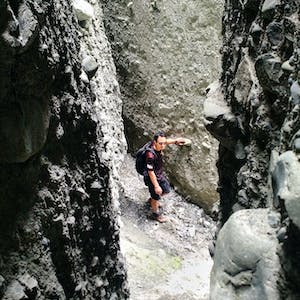