Access
Birchwood Road leaves SH8 17km south-west of Omarama. It’s 24km to Birchwood Homestead. From there, 4WD or MTB 6km to Ahuriri Base Hut and a further 4km to the road end.

Drinking in the views as we wandered up the Ahuriri Valley on a crisp clear day, I commented that many trampers say ‘just a valley walk’ in a pejorative way, and those that see it that way were missing days and places like this.

We’d bailed out of a three-day tops trip in Fiordland on the back of a foul forecast, and scouted around for a trip that offered reasonable weather prospects. Fresh snow followed by warm temperatures suggested that going high would at best mean snow wading and at worst avalanche hazard. So there we were, valley walking, lapping it up in the Ahuriri, albeit for just two days.

We’d driven to Ahuriri Base Hut on Friday night. The DOC sign at Birchwood homestead said 4WD vehicles only, but I’d taken my little Hyundai there before and knew better. Follow my advice, not my example: this road is now not suitable for low-clearance vehicles. But we eventually got to within a kilometre of the road end.

There had been a reasonable frost, and until we escaped the morning shadows we really felt the cold. But the corollary of a frost is almost always a crisp clear day, with superb definition along the ridgelines. We couldn’t believe our luck, as we drank in the array of peaks around us.

Wet feet were unavoidable as we crossed Canyon Creek, and then it was a straightforward stroll to Shamrock Hut, 90-minutes from the car. This is a two-bunk ex-Forest Service hut which has had a deck and firewood lean-to added. A sign says it’s maintained by the Omarama community, and they’re doing a good job.

A further couple of hours took us to Hagens Hut. The map showed the route crossing to the true left, and that may have been necessary when 4WDs were allowed here, but travel on the true right was straightforward – apart from a brief interlude in a matagouri and hebe-choked fan – so we didn’t see the point in crossing over. 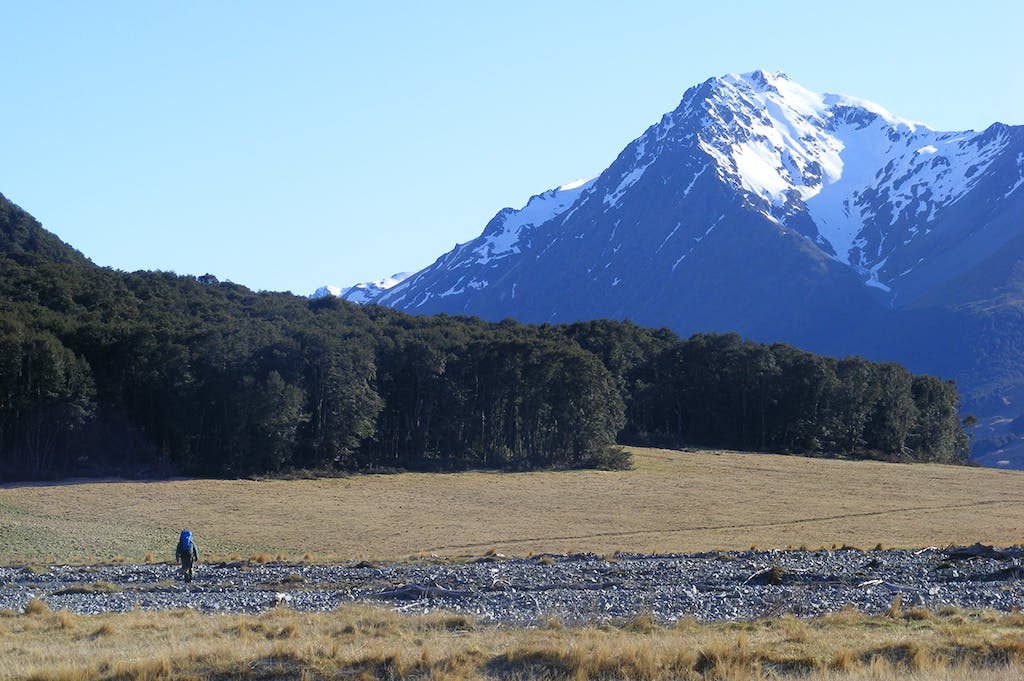 Hagens is a four-bunker, and like Shamrock it’s tucked in by the bush edge with good views up valley. There was gear indicating that some hunters were in residence. So were the sandflies, so we opted to move back out into the valley for lunch. We’d hoped for a gentle breeze to deter the biters but what we got was stronger and cooler than was comfortable.

Another couple of hours saw us opposite the last patch of bush on the true left. I spied the edge of Top Hut in a gap in the trees, so we crossed the river and made ourselves at home. We decided there was little to be achieved in wandering further up the valley, so we just luxuriated in our surroundings. Eric and Pieter both had new tents that – having lugged them this far as insurance against the two-bunk hut being occupied – they were keen to try out, so I had the hut to myself for the night.

We awoke to a drizzly sky which obscured the views of the peaks and forced us into our wet weather gear. To my surprise, within 20 minutes we were peeling off layers and the tops were clearing.

Although we’d seen no one on the Saturday, there were people everywhere on Sunday. There were three trampers camped by Hagens Hut, a couple heading into Watson Stream, a couple of families walking out from the vicinity of Canyon Creek and some day trippers wandering up to Shamrock. In some ways it made a nice contrast: we’d had our solitude, but today we were sharing this wonderful place with like-minded people.

It might have been ‘just’ a valley walk, but it was just what we needed.