Access
Private boat or charter boat, Friends of Mana Island runs occasional trips and can provide guides for groups who wish to charter a boat.

A 20-minute boat ride from the marina at Paremata was all it took to reach Mana Island.

We skimmed across the sea, the houses behind us faded away and the island came into sharper focus. The charter boat drew up close to the stony beach and the crew put out a gangway so we could walk straight onto the beach. No wet feet. Our biosecurity checks were done at home and again at the marina – we’d made sure our boots were clean, any velcro free of seeds and that our packs weren’t home to rodents.

We crunched up past the historic woolshed, a reminder that the island was farmed up until the 1980s. Near the landing area, a flat section of the island includes the ranger’s house and other buildings that occasionally house volunteers and scientists. We strolled along the mown pathways reading the information panels learning about volunteer plantings and how to tell the difference between takahe and pukeko. As if on cue, several takahe walked into view seemingly undisturbed by our presence.

We then began the climb up the Tirohanga Track towards the south end of the island. Walking through the bush, some of which we’d had a hand in planting 20 or so years ago, we admired what 20-25 years of growth could achieve. Yellow-crowned kakariki chattered and swooped around us, bellbirds chimed and, if we stood still, the odd robin made itself known. A steep incline took us to a viewpoint where we could catch our breath and look back towards Titahi Bay. Then, with a little more climbing (20-30min from the lower area) we were on the ‘table top’ of the island.

Once called Table Island by Captain Cook, a more imaginative Maori legend tells the story of a taniwha, te Awarua o Porirua, crashing into the island and flattening the top. This flat top makes the island ideal for a walk to take in the sweeping views in all directions.

A diversion from the Tirohanga Track took us to the southern end of the island. Here we could see the wind turbines of Makara, the Kaikoura Ranges, and other parts of the South Island. Gulls were the most common birds we saw from here, although seabird colonies that have been established through translocations bring other seabirds in at night. 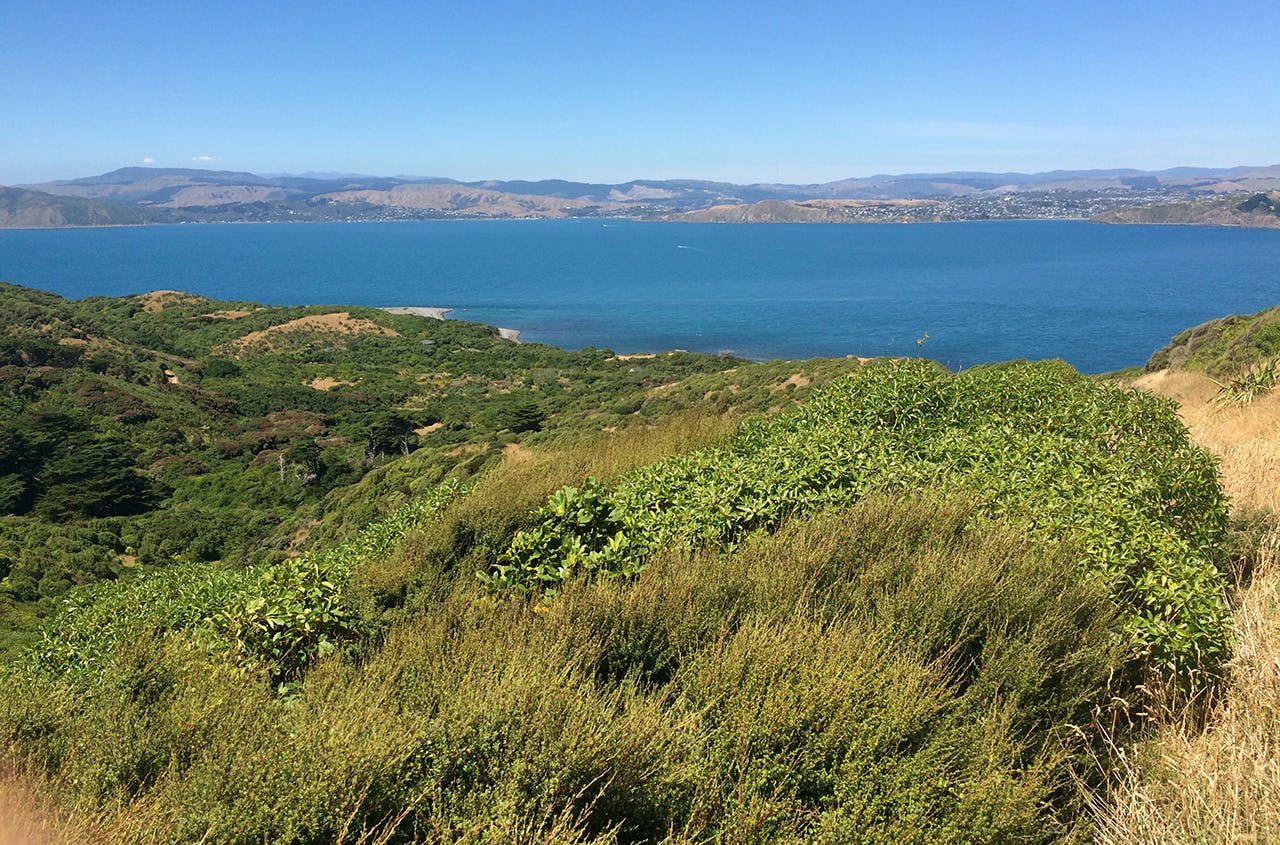 View back to the mainland. Photo: Gillian Candler

Back on the Tirohanga Track, we headed north towards the historic lighthouse site. Bushes, vines, speargrass and flax grow lushly along the sides of the path. The exception being some flax bushes that are being eaten to death by the very successful translocation of a rare flax weevil.

At the site of the old lighthouse, now a trig, we ate lunch and enjoyed the view north to Kapiti Island. On the northern end of the island is a concrete gannet colony set up to try to draw in real gannets. Preferring to see real birds, we didn’t visit this but kept to the Tirohanga Track heading towards the beach. We were rewarded with more kakariki, bellbirds and tui. On the grassy paths, skinks darted away from us and in places a sheet of corrugated onduline provided a warm hiding place for nocturnal geckos, we took a quick peep then put it carefully back down. The lizard population includes rare geckos and skinks and their presence is thanks to Mana Island being free of mice, rats, and other introduced predators.

Back down in the lower area, there was time to look at the reclaimed wetland, and admire the pied shags lined up on the beach drying their wings, before the boat was due to return and take us off the island. From the boat we looked back, satisfied that we walked right around the island’s top. It’s the least well-known of Wellington’s island sanctuaries, but a rewarding visit.

Note: Mana Island is a DOC scientific reserve open to the public from 8am to 5pm. Friends of Mana Island coordinate volunteer trips which often include staying overnight on the island www.manaisland.org.nz