Access
5km north of Renwick, take Northbank Rd for 33km. Drive up Top Valley Rd. A 4WD can ford the stream onto Jacksons Creek Road to the trackhead, saving an hour’s walk

In the New Zealand backcountry there have been several notorious plane crashes.

Sometimes the wreckage was removed; sometimes it is still there waiting for an adventurous tramper to discover and then reflect on how the aircraft came to grief. Our party visited the lofty heights of Johnston Peak (1647m) to search for the remains of ZK-AFE, the first commercial airline disaster in New Zealand.

We had made the journey from Nelson in good time, and forded Top Valley Stream in bare feet. We ascended the logging road for an hour to reach the top car park. After hauling ourselves up an unforgivingly steep spur, the track through beech forest eventually evened out as we picked our way along a knife-edge ridgeline towards Richmond   Saddle Hut.

Light rain fell as we sidled around the headwaters of Armchair Stream to find the NZFS hut almost full. We pitched tents on any flat spots we could find, and headed indoors. The eight-bunker somehow accommodated 17 souls during an evening of swapping tales, sharing chocolate and playing Scrabble.

The first rays of dawn saw us stretching back into shape, and dusting frost off the tents. Once above the bushline, on our way to climb Mt Richmond, our party spread out across 40-degree slopes of shattered scree and teetering boulders. Stopping to admire the little things like vegetable sheep and penwiper plants, the slow grind to the summit cairn took an hour, but the views took our breath away.

This pyramidal peak was named after a prominent farming family in the Wairau. On a clear day, Mt Richmond (1760m) provides a spectacular platform to gaze at the world below. To the north, Taranaki rises defiantly from the Tasman, while to the south, there was a fresh dusting of snow cloaking Tapuae-o-Uenuku.

We pushed onward, descending the rocky jumble on the east side of Mt Richmond, weaving through rocky ramparts to the prominent saddle between Mt Richmond and Johnston Peak. 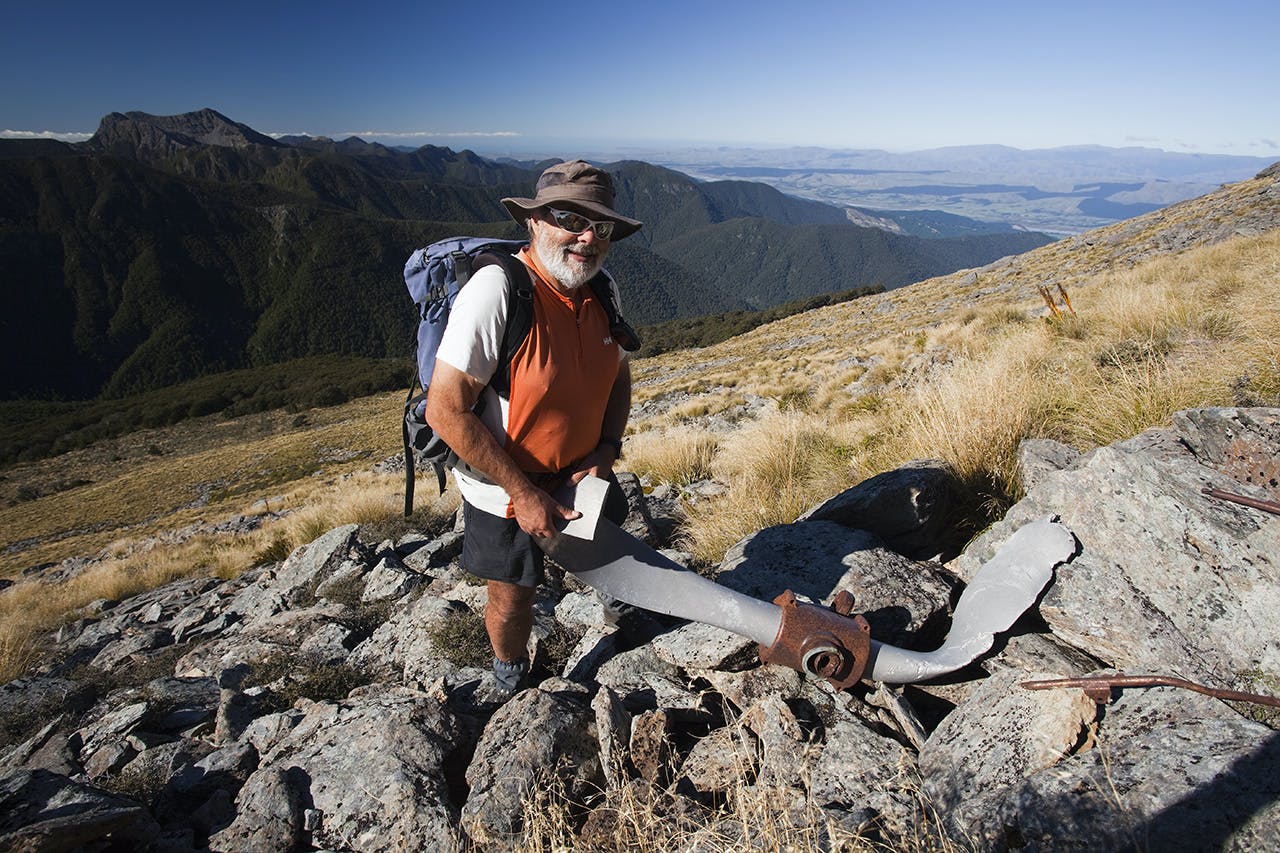 A mangled propellor form the Kereru, found on the flanks of Mt Johnston. Photo: Ray Salisbury

A short puff onto the ridge put us within striking distance of Johnston Peak, named after the pilot Keith Richard Johnston. However, to attain the summit meant leaving the poled route, and scrambling around a
number of rocky tors.

From the summit, we began searching the tussock slopes to the north of the peak for signs of the airplane crash site. Without accurate coordinates, it took us more than 30 minutes until somebody sighted a metallic object, about 700m from the summit and between the 1500m contour and the bushline (exact coordinates: 41°28.340’S, 173°24.549’E), shining out of the brown-green tundra.

Our joy in finding the Kereru was mixed with sadness at the tragedy, as we found a plaque cemented into a rock wall, right at the point of impact. Tiny fragments of the nose-cone were still embedded into the rock. Several metres below were the pilot’s foot pedals; below this was a propeller; then the landing gear; then a section of the fuselage, contorted and melted in the ensuing fire. For 72 years, bits and pieces have been scattered downhill by melting snow and shifting scree in a direct line from the plaque to the bushline.

On May 7, 1942 the Kereru, a twin-engine Lockheed Electra, departed Wellington for Nelson, but was forced off-course by poor visibility and strong winds. A nearby farmer in Canvastown heard the sound of a plane “battering against the storm” and “two bangs”. Hundreds of people spent days searching for the missing airliner, until a plane from the Woodbourne airbase discovered the burnt-out wreckage. There were no survivors; five people perished.

The body recovery lasted 10 days, in freezing temperatures and formidable terrain. Bodies were doused in disinfectant, placed in sacks then carried out on make-shift stretchers. During one evening, the bodies were tied in trees so wild pigs couldn’t reach them.

One of the deceased passengers, keen local tramper Pamela Ruth Fell, had nearby Mt Fell named after her.

After an abandoned attempt on Mt Fell, we made a second traverse over Mt Richmond during the golden hour. Near the top, the setting sun cast our shadows onto the swirling clouds below. We had witnessed the Spectre of the Brocken – our giant silhouettes encircled by a rainbow like a ring of protection.

Once the magic show ended, we descended through a darkened forest, dribbling into the hut after nine hours’ glorious exploration.