Tramping in the dark can be exciting, but it means you don’t get to see anything much. So after tramping into Skips Hut (Whangatawhia) in the dark a couple of years ago, I thought I needed to go back and do it again in the daylight, to see what I missed.

It’s a bit of a drive to, and down, Okahu Road, where there are plenty of excellent camping spots, but Mid Okahu Hut, halfway along the road, has been removed. According to DOC, ‘Mid Okahu Hut has reached the end of its design life. Due to increased maintenance costs and health and safety concerns, the hut has been removed and will not be replaced.’ And so another one bites the dust.

It’s a light womble up and over to Skips Hut, gaining some 120m altitude in an easy fashion, a good thing too as this is also a mountain bike track. The walk in is picturesque aside from some windfall and destruction early on, and there are no stream crossings to speak of, just a few bridges. There is, however, one tricky slip on the way, where the stream has eaten away at the bank and the track has fallen into the water. We could get up and around it (or down and into the stream) but it wouldn’t be such a simple manoeuvre with a mountain bike in hand. Numerous other slips were easily navigated, but looked like they would also fall in the next decent storm. Some track maintenance here is sorely needed.

It takes just under two hours to reach the hut, although it could easily be done in 90 minutes. Skips is a super clean nine-bunker with a wood burner and a deck that overlooks the Whangatawhia Stream. Whio are at home here, although we only saw one all trip.

We kept going to Rogers Hut, aka Te Wairoa Hut. Rogers is an historic six-bunker in DOC rescue orange, resplendent with stained glass windows and hand hewn bunk beams. I’d walked past this previously and thought it ideal for an overnight trip.

The Moerangi Stream flows past impressively and there’s plenty around the hut to explore and enjoy. The hut is at the junction of the track to Mangakahika Hut and the mountain bike/shared use track to Moerangi Hut, so there’s plenty of traffic.

Thankfully we had our tent, because we were not the only ones staying and the hut soon filled with bikers, trampers and hunters.

Returning to Skips Hut, we found a stinking hot hut and two large and heavy bags of rubbish left there by mountain bikers, who also wrote ‘thanks for the wood!’ in the hut book although they had not made any effort to replace what they had burned. Usually I’m a rubbish retriever but even this was too much to clean up. 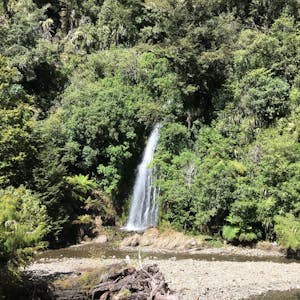 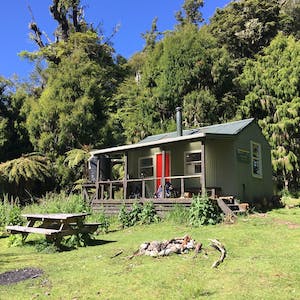 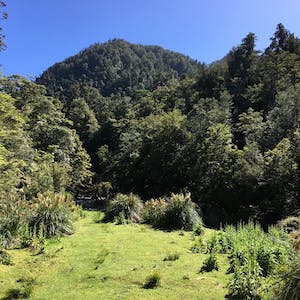 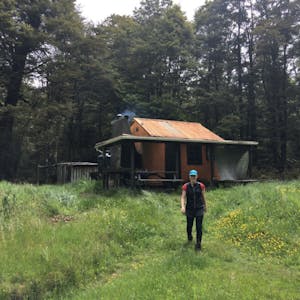 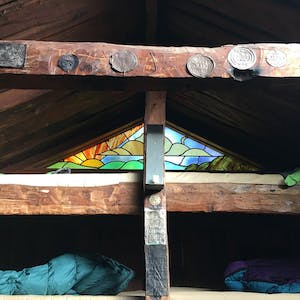 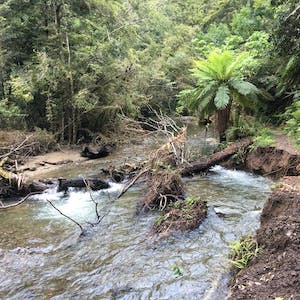