Southern tussock at its finest

IF YOU HAVE a taste for tussock and classic remote huts, a jaunt to Becketts Hut in the Takitimus will be right up your alley. It’s an ideal weekend getaway if you’re in the southern reaches of the country, and will almost certainly give you a sense of solitude if you’re after some peace and quiet.

Our trip into the Takitimus was a fortuitous plan B; we were forced off an epic due to weather, and the Takis were the driest part of the South Island for our weekend tramping aspirations. The Takitimu Conservation Area is just south of Te Anau and, with 12 huts and a plethora of tracks to explore, is a perfect stomping ground to get away from the crowds.

The Takitimu Mountains is named after the ancient Maori migration waka, known as Takitimu. According to DOC, the captain of the waka, Tamatea, named the mountains to commemorate the wreck of his vessel in rough weather at the mouth of the nearby Te Wae Wae Bay. In the history of Ngai Tahu, Tamatea’s waka was overtaken by three large waves and thrown inland, where the overturned hull became the mountain range.

Arriving late on a Friday night, we stayed at the six-bunk road-end Lower Princhester Hut, a stop on the Te Araroa Trail. It’s on the edge of the forest, with a flowing stream and gentle bank for easy water collection. While there was space in the hut, we chose to camp on a grassy patch with a soundtrack of the trickling river.

Next morning, we set off into the beech forest up the Princhester Saddle Track. Roughly two hours along the steep marked track, the route opened up into the tussock-filled Waterloo Burn. From here, the track was only vaguely marked for another kilometre or so before a sign marked a split where the Te Araroa Trail branched to the right, while the Becketts Hut path continued straight down the valley.

Weaving through the tussock led us over the Waterloo Burn several times, but it was running low enough to keep our feet dry. We carried on for about an hour before stopping to consult our GPS to ensure we hadn’t missed the hut. It’s not in an obvious location, and the only member of our party who had been there before said it would take a bit of hunting to find it.

The GPS showed we were just around the bend from it, and after a couple more crossings of the Burn and tussock-hopping through a boggy field, we spotted the orange triangle on the true left of the river marking the pathway up to the hut.

Becketts Hut is a true relic. A four-bunker with all the markings of a classic, it has a massive open fireplace, small kitchen counter with some emergency food stocks, and a healthy supply of camping chairs stowed in the loft cupboard above the doorway. We spent the afternoon soaking up the last of the sun before building a fire and settling in for the night.

The following morning was another slow start, and as we set off from the hut, we opted for the quicker approach back to Princhester, following the riverbed and avoiding the tussock scrambling of the previous day. Overnight rain meant slightly deeper crossings, but the riverbed route shaved some time off our return trip. 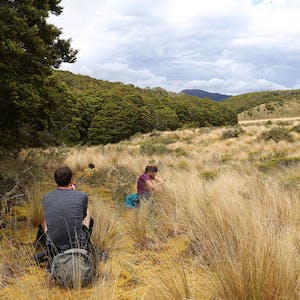 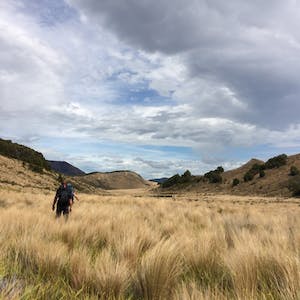 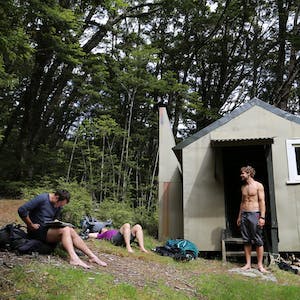