A walk through time

ON CHRISTMAS DAY just over 200 years ago, Māori joined European missionary settlers to celebrate the first Christian service in New Zealand.  At Rangihoua Bay in Northland’s Bay of Islands, the Rev. Samuel Marsden preached at what is now the Marsden Cross Historic Reserve.

In 1814, the bay was overlooked by Rangihoua Pā and it was the local chiefs, Ruatara and Te Pahi, who had invited Marsden to set up a mission in New Zealand. John and Hannah King,  Thomas and Jane Kendall and William and Dinah Hall travelled halfway around the world to set up this outpost of Christendom. It was at Rangihoua that the first European school was built, the first book on te reo Māori was prepared and the first Pākehā child was born. Marsden Cross is where the foundations of New Zealand were laid.

The walk begins at a car park on Oihi Road where there is a structure built from rammed earth with a winged roof that houses a three-dimensional model of the area along with other information.

The track is of an easy grade and winds gently downhill through open farmland. There are views out across the Bay of Islands, the waters dotted with sails.

The track to the bay is little more than a kilometre in length but is punctuated by information panels which tell the stories of the main characters who populated the Rangihoua settlement: Samuel Marsden, Te Pahi, Ruatara, the mission families and Māori who lived amongst them – also the ‘ticket of leave’ men (convicts) who worked at Rangihoua. The track passes a dozen or so of these boards before reaching an area of overgrown orchards, New Zealand’s first, close to the beach.

A memorial here commemorates Thomas and Elizabeth Hansen, the first non-missionary settlers in New Zealand. Thomas arrived on the brig Active in 1814, his wife joined him two years later.  The memorial, complete with anchor, was erected in 1991. The track loops around here and comes out above the beach by the Marsden Cross.

This cross has been in place since 1907 but large interpretation panels were installed in 2014. By the beach there is a board showing what the settlement looked like on Christmas Day 1814. Looking at this image, and others nearby, brings to life what the settlement would have been like. The quiet, empty, flat terraces otherwise give no indication that men, women and children lived and worked here.

By 1832, the settlers moved from Rangihoua Bay to Te Puna, a little to the west, where land was more fertile. Rangihoua Pā, which was an important and populous stronghold at the time, is now as equally deserted as the mission site.

The track is mainly in the open and it was a hot day so we were glad we had plenty of water as we walked back to the road. 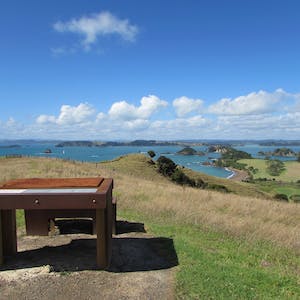 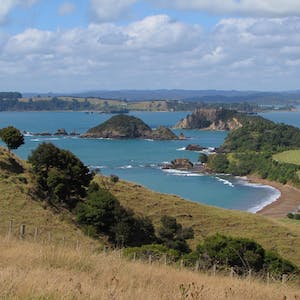 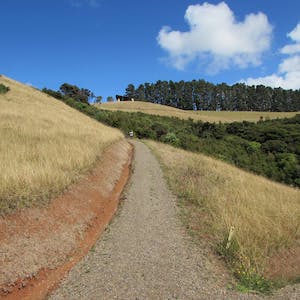 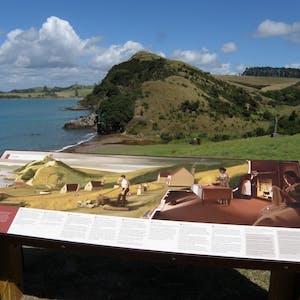 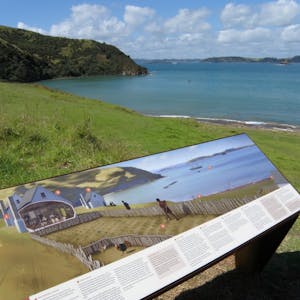