I’m on a tramp with my Wednesday tramping group and there are so many new faces, it’s hard to remember them all. Our group, the Forest and Bird Wellington Regional Tramping group, is growing to the extent that we need to offer a choice of two tramps each Wednesday – if we can find enough leaders for them, that is.

What’s behind the growing number of people joining day-tramping and walking groups? Ask around my group and the answer varies. “It’s baby boomers retiring”, “people are being told that they need to get walking for their health”, “people come along for the company”.

There’s also people who have always been trampers and still enjoy the pastime but like to fall into their own bed at the end of the day. These extraordinary people include those in their eighties or beyond: an inspiration to those just joining.

Others like Chris Comerford want to get back into the bush, which she remembers fondly from her youth, but raising children and full-time work meant she wasn’t able to pursue tramping. When she retired, she spotted our tramping group advertised in her local newspaper. Since then she’s also done a tramping bushcraft course and a couple of overnight trips. “The only thing,” she says ruefully, “about taking up tramping when you are older is that your body can sometimes let you down.”

Gavin Mickell is typical of our new members. He’d never tramped before but wanted something active to do in retirement. He started by joining the Tararua Tramping Club a year or so before he retired, he was down to four days of work a week so had a day spare for tramping. “Getting into tramping has opened up a whole bucket list things I want to do,” he says, “It’s also given me the confidence to do it, I’m off to the Heaphy soon on a trip I’ve organised for family.” 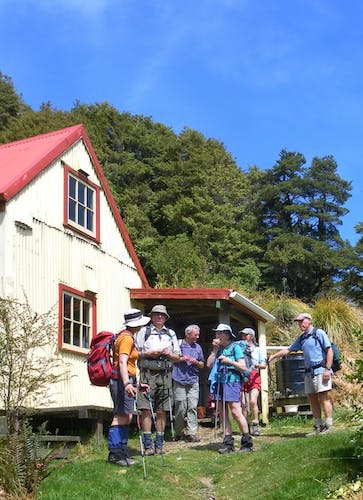 Lunch over, trampers at field hut prepare to head back down the track. Photo: Gillian Candler

Not everyone is retired, some work part-time or are self-employed. I’m one of those and since becoming self-employed, I always keep Wednesdays free to tramp.

Our tramps vary from easy to fit, although being Wellington it’s hard to find ‘easy’ tramps so most are ‘medium’ or ‘medium/fit’. Usually they are five to six hours long. Tramps range from well known tracks in forest or regional parks to those without any formally marked tracks in little known patches of wilderness. Occasionally the tramp follows a coastline or takes in city parks and pathways. Out and about we might bump into Tararua Tramping Club day trampers, Kaumatua trampers or one of the numerous local walking groups.

Some groups, such as tramping clubs which also offer multiday tramps, are quite formal in their organisation, requiring membership fees, appraising new members for suitability and publishing a programme of tramps. Many walking groups have open membership and a pay-per-walk fee. Other informal groups have no fees and rely on email or Facebook to communicate information about the next walk. Look online and you’ll find groups from the Far North down to Invercargill. Some only walk for a few hours, others put the day aside. And they’re not all for the over 50s, there are family walking groups and buggy groups for mums and babies.

It might seem surprising how many groups there are and how popular they’ve become. The frequency and regularity are some of the main advantages, as even the most motivated trampers can find it difficult to plan a weekly tramp on their own. “Knowing that there is a tramp planned for every Wednesday is fantastic, you don’t have to go but the fact that it is planned makes it more likely you will,” says Philippa Doig.

Tramping with a group provides variety, as different leaders favour different destinations. Some leaders identify, recce and create new trips for the group’s enjoyment. John Groombridge, who occasionally leads walks for both Kaumatua Tramping Club and Forest and Bird, says he has fun exploring new routes or reviving old tracks that have not been used for some time. “I heard there was a giant northern rata in our area which had been recorded as the largest known, which was a great incentive to explore options to lead the group to something special. We had also heard of another group who had failed in their attempt to find it. It took a couple of us three trips to find it and work out a good route for the tramping group.”

During tramps, others also share their knowledge of native trees and plants, tramping tips and bushcraft. The shared experience of the weekly tramps creates new friendships and flows over into their social lives outside of the group. Shortly after they retired to Kerikeri, Vaughan and Alison Dyer were invited on a walk by neighbours. “It was marvellous, the walking group became our social group,” says Alison. “It was a wonderful way to get to know people.” Twelve years on and they are still walking with the group and Vaughan helps put together the schedule, making sure the two to three hour walks take into account tides, seasons and variety. With no membership fees or rules, the informal organisation allows for splinter groups to form as some begin to find the walks challenging and want to do an easier walk and others want the challenge of a longer tramp.

There are a number of other advantages that come with being part of a group. Sharing transport is one – most groups have some kind of car pool arrangement. Being able to get together a large group also makes it possible to organise a boat trip to a hard-to-get-to island sanctuary or a bus trip to a more distant location. Groups can also often get access to places that are harder for individuals to get to on their own, such as private land or a restricted wilderness area. 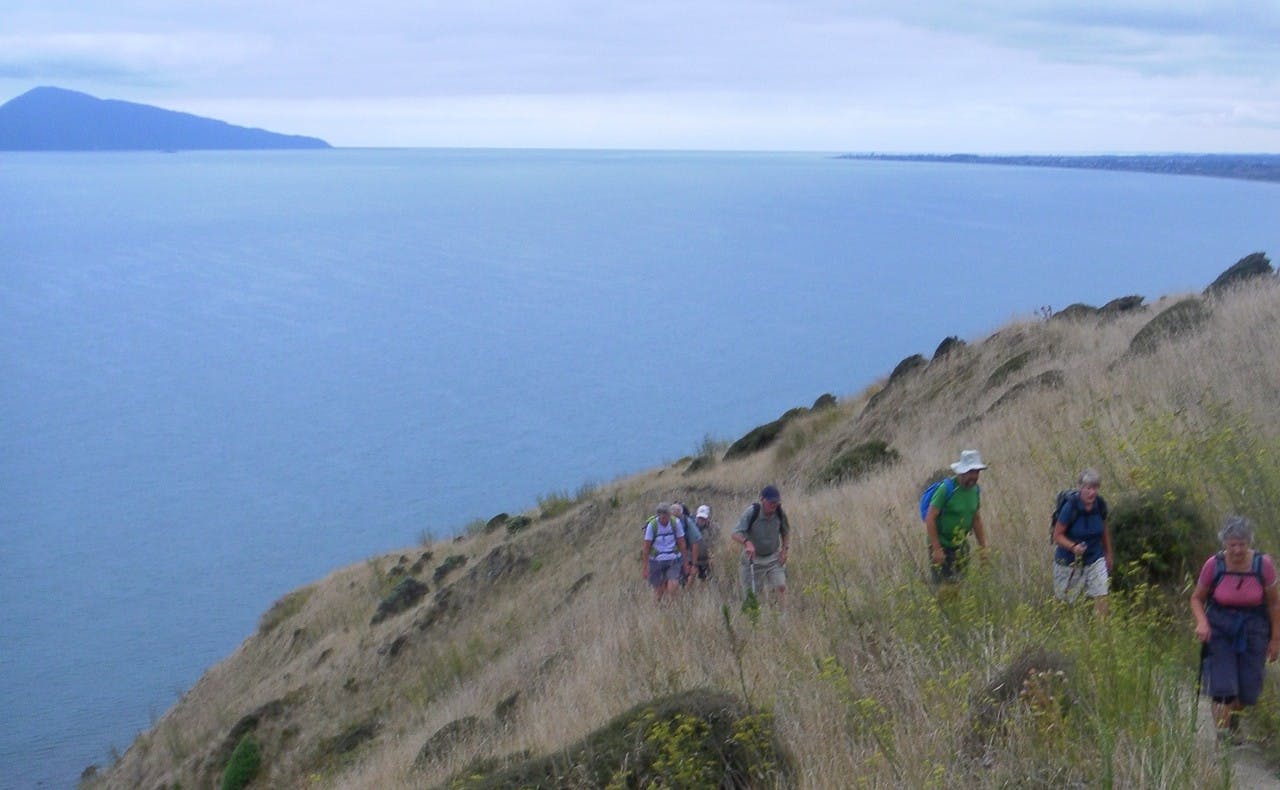 Walkers Trying out a part of the Te Araroa Tail between Paekakariki and Pukerua Bay. Photo: Gillian Candler

Of course, tramping in a large group can take some getting used to. Negotiating a fallen tree or a steep climb in a group of 15 or so can be a bit slow, and the chatter of a large group can be noisy – unless they’re puffed from a decent climb. The growing popularity of walking groups can have a downside, Vaughan says: “We recently had 32 on a bush walk and, depending on where the walk is, that can be too many. Keeping such a large group together in the bush requires a lot of stopping and starting which can be frustrating for everyone.”

As the names of different groups suggest, there can be a blurred line between the terms ‘walking’ and ‘tramping’. Some say that tramping is ‘vigorous walking’, and certainly many groups that describe themselves as ‘walkers’ do this vigorously. Others choose the term according to the kind of path or track and what’s involved in the way of effort and obstacles, with walks being on footpaths or formed walkways, and tramps being on tracks in the bush, sometimes without markers.

Tramping to Cynthia Petersen means the possibility of negotiating fallen trees, crossing streams, wading through mud or using a tree as a handhold. “I don’t like hard tracks or roads, it’s much easier to walk on a bush track,” she says. “I love to hear the birds and look at the plants. When the sun is shining through the bush it’s magic, and if it’s just rained the bush is glistening. The weather and seasons mean that every time you tramp there is something different to see and experience.”

Equally for some there can be as much adventure and delight in tramping through a town. Since he began leading walks, Gavin Mickell says “I like creating a walk to lead, exploring byways and finding connections between different parts of a suburb, linking up parks and reserves. I like the concept of claiming back public areas, walkways that have got taken over by people’s gardens or overgrown.” Jackie Chubb, who is a member of an informal Auckland walking group, agrees: “Urban walks are great fun. It’s surprising the gems one discovers when you walk a new neighbourhood. Often these can include walks that are mostly ‘off street’. So great fun in a relaxed group where each walk tends to start with a coffee.”

Tips for joining a group