If anywhere comes close to tramper’s paradise, it is Kahurangi’s Tablelands. Rolling tussock tops, interspersed with patches of beech forest, give the Tablelands a fine mosaic of colours and textures, all with the backdrop of Mt Arthur and the Twins – marble mountains shaped by past glaciation.

This circuit begins with a climb to Mt Arthur Hut, before traversing Gordons Pyramid to reach Salisbury Lodge and the Tablelands. The remainder of the track follows Flora Stream.

If the weather permits, a side-trip up Mt Arthur is well worthwhile.

Whirinaki has been described by none other than David Bellamy as ‘one of the great forests of the world’. Certainly, the area features mature podocarp – rimu, totara, matai, miro and kahikatea – in a rare density, and this circuit takes you through some of the best parts of this renowned forest, which was saved from logging in the mid-1980s.

Over three days, the 36km circuit arcs around the headwaters of Whirinaki River, with two comfortable huts – Central Whirinaki and Mangamate – en route. 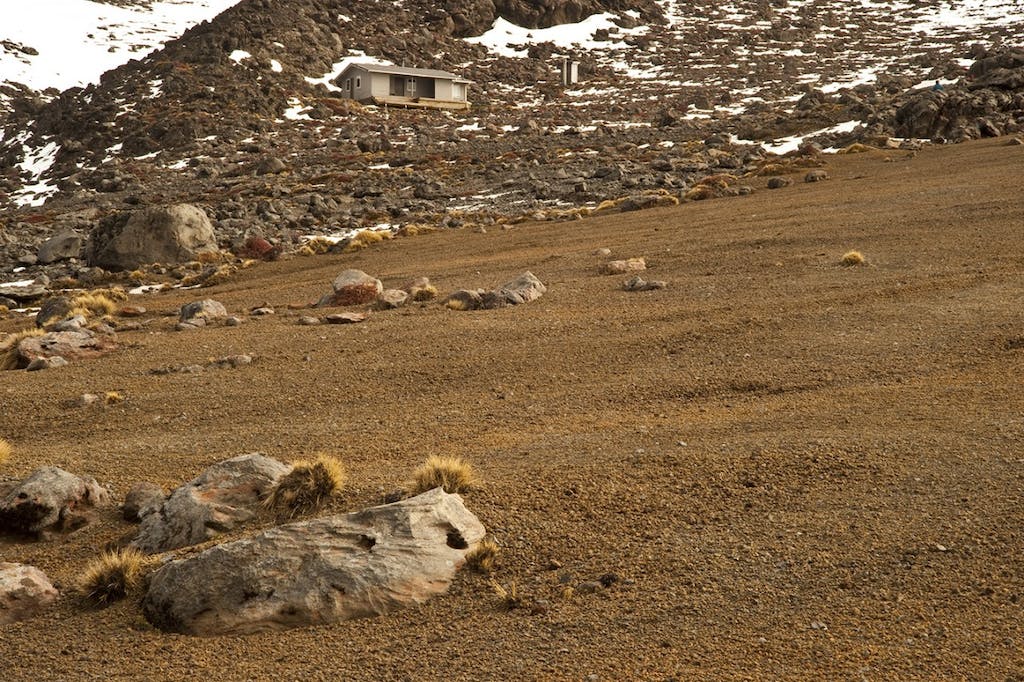 While less famous than the Tongariro Northern Circuit, the track encircling Mt Ruapehu is undoubtedly one of the best in the North Island. By traversing the flanks of the country’s highest volcano, the route passes through a splendid variety of terrain: beech forests, volcanic lakes and tarns, wide, desolate valleys and the curiously barren Rangipo Desert.

While several entry points are possible, a good place to start is Ohakune Mountain Road – if for nothing else, its high altitude offers a good launching pad. The first part of the track crosses Ruapehu’s southern flanks, here dominated by the Matterhorn-like spire of Girdlestone, which appears whenever the track emerges out of forest. Beyond the first hut, Mangaehuehu, the track crosses several large valleys, notably the Waihianoa, before reaching the Rangipo Desert. Tenacious plants struggle for life in this high, dry environment, and there’s nowhere else like it in New Zealand. Rangipo Hut is the highest on the circuit, set at the lofty altitude of 1560m.

From Rangipo, the track continues north, crossing a swingbridge over the Whangaehu River – the path of several lahars. Past the Tukino Skifield road, the desert loses it grip and patches of beech forest begin to appear. Waihohonu Hut is the largest on the circuit, and allows excellent views of both Ruapehu and Ngauruhoe. After passing the historic Old Waihohonu Hut, the track climbs westward over Tama Saddle, where a worthwhile side-track leads to viewpoints of the brilliantly-blue Tama Lakes. Mt Ngauruhoe dominates the view for much of the day. Beyond the Tama Lakes, a descent leads to Taranaki Falls and the tailored path to Whakapapa Village. 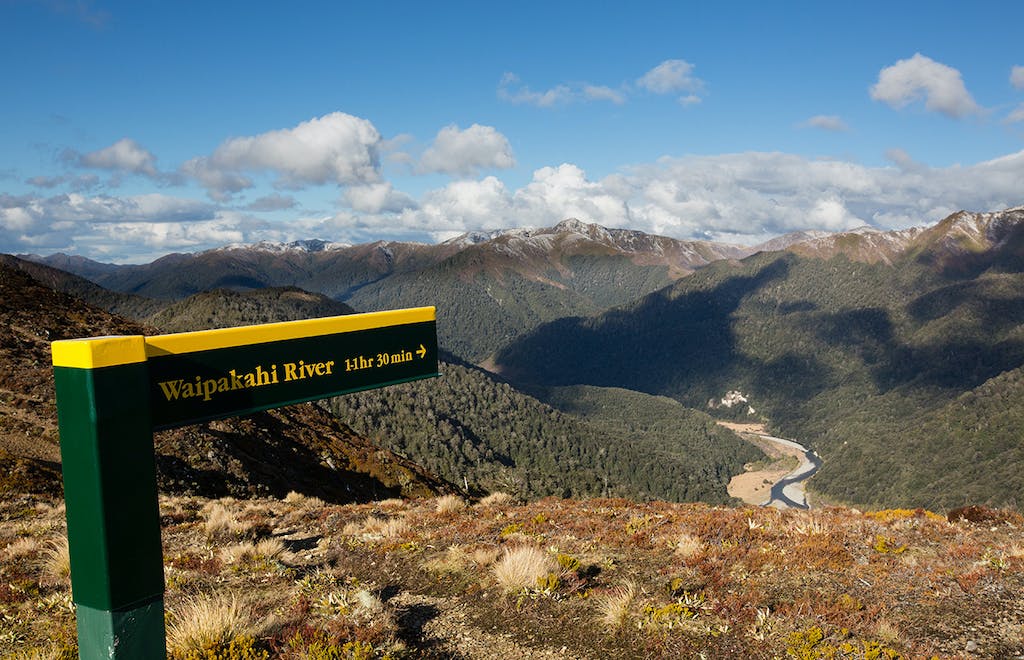 Waipakihi Hut occupies a fine position on a terrace in the head of the Waipakihi Valley, beneath the Umukarikari Range, where bush, river and tussock mingle.

The track climbs solidly through beech onto Umukarikari Range, where a poled route leads over sparsely-vegetated tops, before a descent to Waipakihi Hut. From the hut, a route leads down the Waipakihi River, crossing where necessary, until reaching a campsite at the base of Urchin Track. After a stiff climb towards Urchin, a link track follows a ridge back to the Umukarikari Range, joining it near Sharp Cone. Then it’s a simple matter of retracing the inward route back to the car park.

This well-known circuit in the Tararua Range, an easy drive from Wellington, is very popular for good reason: it has excellent tracks, three good huts, and a variety of terrain including forest, river valleys and tops. The tramp begins at Holdsworth Lodge, climbs up the well graded track to Powell Hut, then traverses over Mt Holdsworth and the tops north to Jumbo. From Jumbo Hut, a steep track descends to the delightful Atiwhakatu Valley and hut, from where a well graded bush track leads back to the road end. 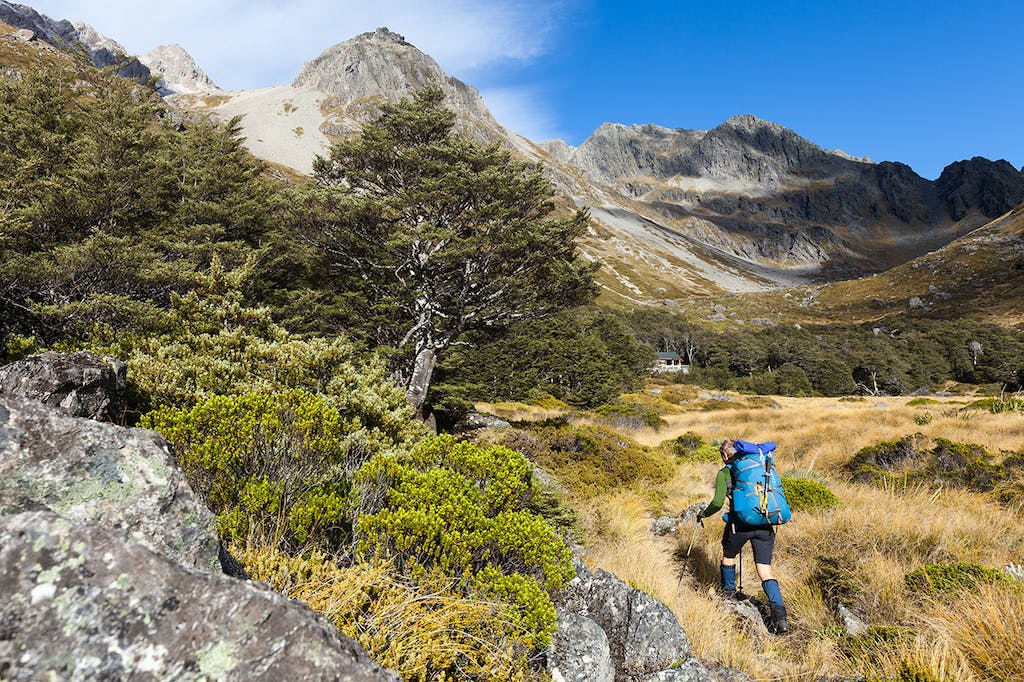 Gently into the Alps

This classic tramp offers a relatively gentle introduction to the Southern Alps, which reach their northern extent here.

The track begins easily enough, following the edge of Lake Rotoiti to reach the Travers River. Carved by glaciers during past ice ages, the Travers is cloaked in beech forest, interspersed with numerous grassy flats. Steady travel up-valley leads to John Tait Hut, Travers Falls and finally Upper Travers Hut. From here, a solid climb leads to Travers Saddle, beneath Mt Travers, before an abrupt descent to the Sabine Valley. At West Sabine Hut, keen trampers might like to make an overnight side-trip to the exquisite Blue Lake, which contains some of the world’s clearest freshwater.

The track down the Sabine Valley leads to Sabine Hut, set on the shores of Lake Rotoroa – the largest lake in the park. In poor weather, trampers are advised to use the track that leads past Speargrass Hut, but in fine weather a more satisfying option climbs over Mt Cedric to Lake Angelus. From Angelus Hut, the final day traverses the tarn-riddled Robert Ridge, which has excellent views of both Lake Rotoiti and the adjacent St Arnaud Range.

Green Lake was formed from an event that scientists claim was the world’s largest known rockslide. Some 12,000 years ago, an entire wall of the Hunter Mountains collapsed, creating a basin in which Green Lake formed. It’s one of Fiordland’s more picturesque lakes, but was not on the radar of most trampers until DOC built a comfortable 12-bunk hut in the area.

From Borland Road, the track climbs briefly through forest onto the Borland tops. An unmarked route (note: you’ll need reasonable navigation ability and good visibility) traverses these tussock tops, passing numerous tarns, over Pt1476m, before descending to the northern shore of Green Lake. From Green Lake Hut, the track passes through beech forest past Island Lake and some wetlands to reach Borland Road once again. It’s a 30-minute road walk back to Borland saddle. 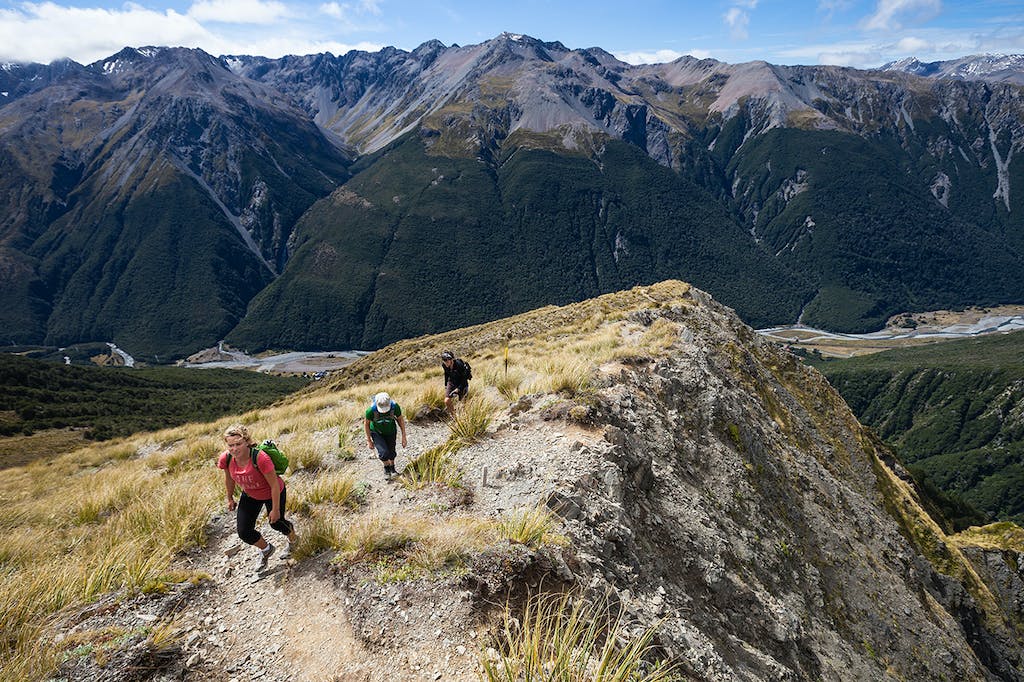 The exception to the rule

Completing a round-trip in Arthur’s Pass is quite difficult. Most of the area’s popular tracks – the Mingha-Deception, Tarn Col and Three Passes, require some sort of transport juggle. One exception is Avalanche Peak.

The Avalanche Peak Track climbs steeply through beech forest before emerging onto the mountain’s tussock flanks. Poles lead to the 1833m summit and panoramic views over the Southern Alps with nearby Mt Rolleston dominating. Just below the summit, Scotts Track branches off, offering an alternative descent to Arthur’s Pass village. In winter or spring, mountaineering skills are required. 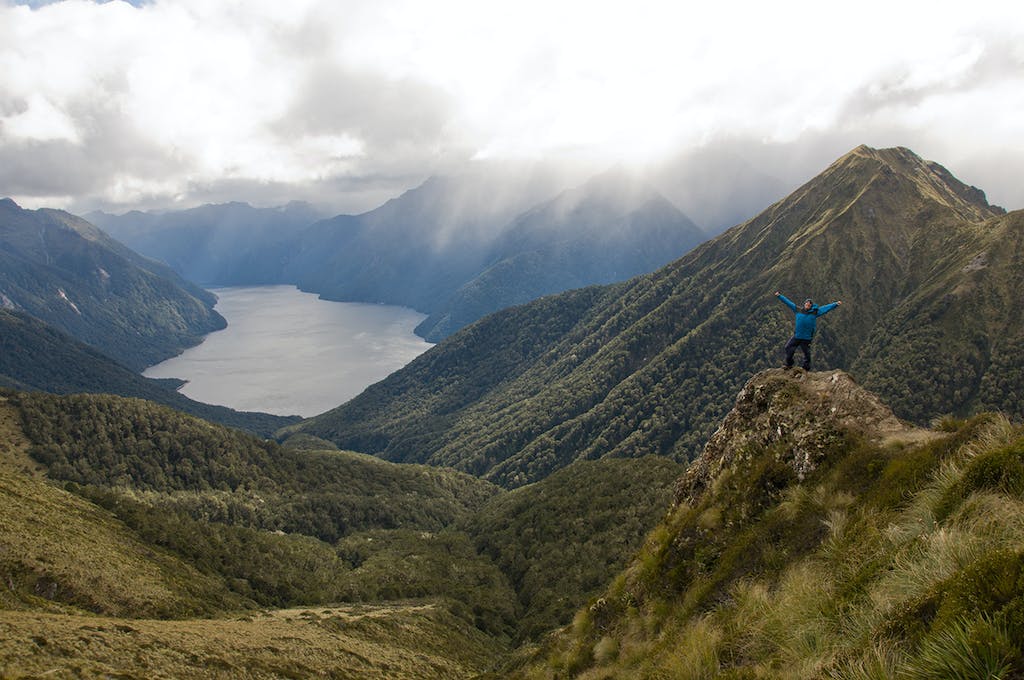 Convenient and a Great Walk

Along with the Rakiura Track, the Kepler is the only Great Walk that forms a convenient circuit. Developed from existing tracks in the mid-1980s, it was opened in 1987 to extend the range of tramping opportunities in New Zealand’s largest national park. Essentially, it connects Lakes Te Anau and Manapouri, by traversing an outlier of the Kepler Mountains.

The track begins by traversing the shoreline to Brod Bay, where it begins the climb to the Luxmore tops. Luxmore Hut overlooks the South Fiord of Lake Te Anau, with grand views of the Murchison Mountains.

The next day traverses tops with vistas of Fiordland’s vast eastern mountains. Two shelters at Forest Burn and Hanging Valley offer respite from the elements, then a series of steps and zigzags leads to the Iris Burn, where a hut is situated in a forest clearing.

The third day’s walk goes down the Iris Burn Valley to the river’s confluence with Lake Manapouri, thought by many to be the most beautiful of all New Zealand’s large lakes. Moturau Hut’s lake-edge position offers views over Manapouri’s many islands.

On the final day, the gently graded track crosses a low ridge to the banks of the Waiau River. While ending at Rainbow Reach is possible, completing the full 60km circuit requires walking the final stretch of track beside the Waiau River to the control gates. 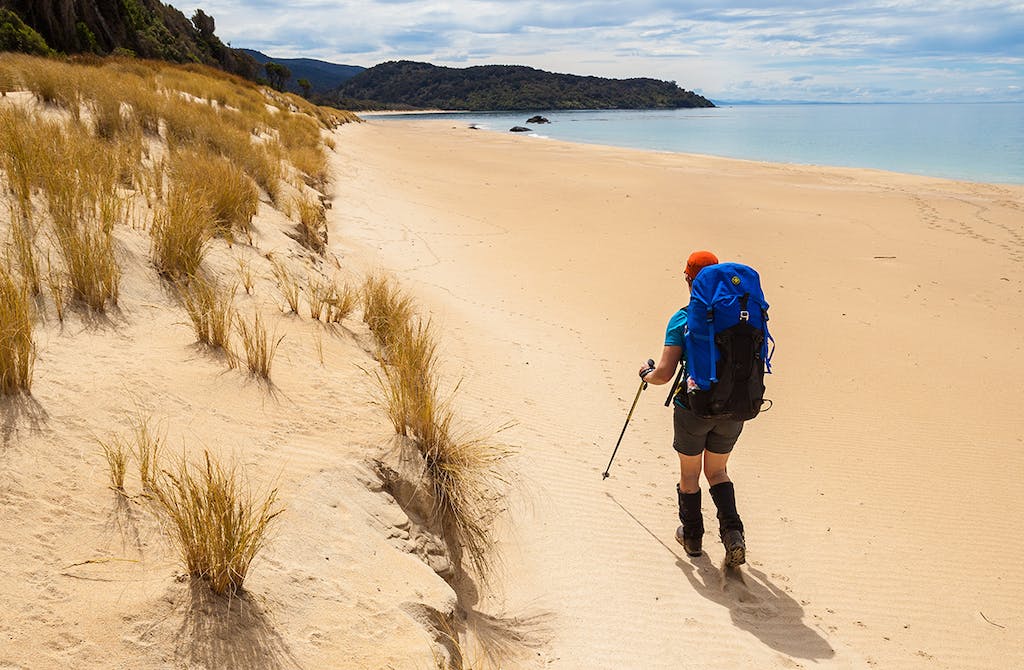 The long way round

The North West Circuit carves a great arc around the top half of Stewart Island, offering in abundance the highlights of New Zealand’s most recently formed national park: dense forests, rugged coastlines, extensive sand dunes and good birdlife. Chances are you’ll not only hear kiwi, but see them too – possibly in daylight.

While spectacular and rewarding, the North West Circuit is not, however, for the faint hearted. Mud – great boot-swallowing swathes of it – sometimes makes the tramping arduous, as does the need to carry food for at least eight days.

The track begins and ends at Stewart Island’s only town, Halfmoon Bay. Tackling the track in the anti-clockwise direction offers a gentler introduction by following the groomed trails of the Rakiura Track as far as Port William. Beyond, the track alternates between sandy beaches and rimu-dominated forest, passing Bungaree, Christmas Village, Lucky Beach, Yankee River, Smoky Beach and Long Harry Bay (from Christmas Village, a side-trip to climb the island’s highest peak, Mt Anglem, is possible).

The first area of large dunes is encountered at East Ruggedy, with more along the length of West Ruggedy Beach. Big Hellfire Hut sits atop an enormous expanse of sand some 200m high, then at Mason Bay comes a sweep of dune-lands some 14km long and up to 3km inland.

The final days of the track strike across the waist of the island, to reach Freshwater Landing. From here trampers can exit by water taxi, but completing the full circuit requires a tramp over to Paterson Inlet, and North Arm Hut, where the last leg of the Rakiura Track leads to Halfmoon Bay.