Unbelievably, Pat Holland was knocking on my front door at the insane hour of 3am. There was no response to his wake-up calls, so he double checked the time. Yep, he was four hours early.

At a more civilised hour, Pat returned to collect me and my mountain of gear. We rendezvoused with other sleep-deprived adventurers at Simon’s house. By 7am, we were being whisked over the Whangamoas, chattering in excited anticipation about our proposed climb.

More than three hours after leaving Nelson, we turned inland up the Awatere River. Clouds of dust followed our vehicles as we drove the Molesworth route to Gladstone Downs. Alan and Bev Pitts have lived here since 1963, but as it was lambing season, we were not granted permission to cross their farm track.

Twenty-three years earlier, I had romped over this 4WD road into the Hodder River, in scorching summer heat. I was young, naïve, dehydrated and sunburnt, but wise enough to turn around, my tail between my legs. It’s times like that I think of what Shackleton said to his wife: “I’d rather be a live donkey than a dead lion.”

Now I’m back, splashing knee-deep up the Hodder. This narrow ravine cuts through steep, broken hinterland, hemmed in by vertiginous, crumbling walls that rise to a slash of blue sky above. I was feeling a bit claustrophobic.

An hour upriver, we arrived at the confluence where the Shin flows in. Somewhere up above is Shin Hut, from where a tall, young air force trainee made his solo summit bid in 1944. His name was Edmund Percival Hillary. This beekeeper from Tuakau was hell-bent on climbing his ‘first decent mountain’. Battling through a winter snowstorm, Hillary cut steps to the top, returning to Shin Hut in only 14 hours. 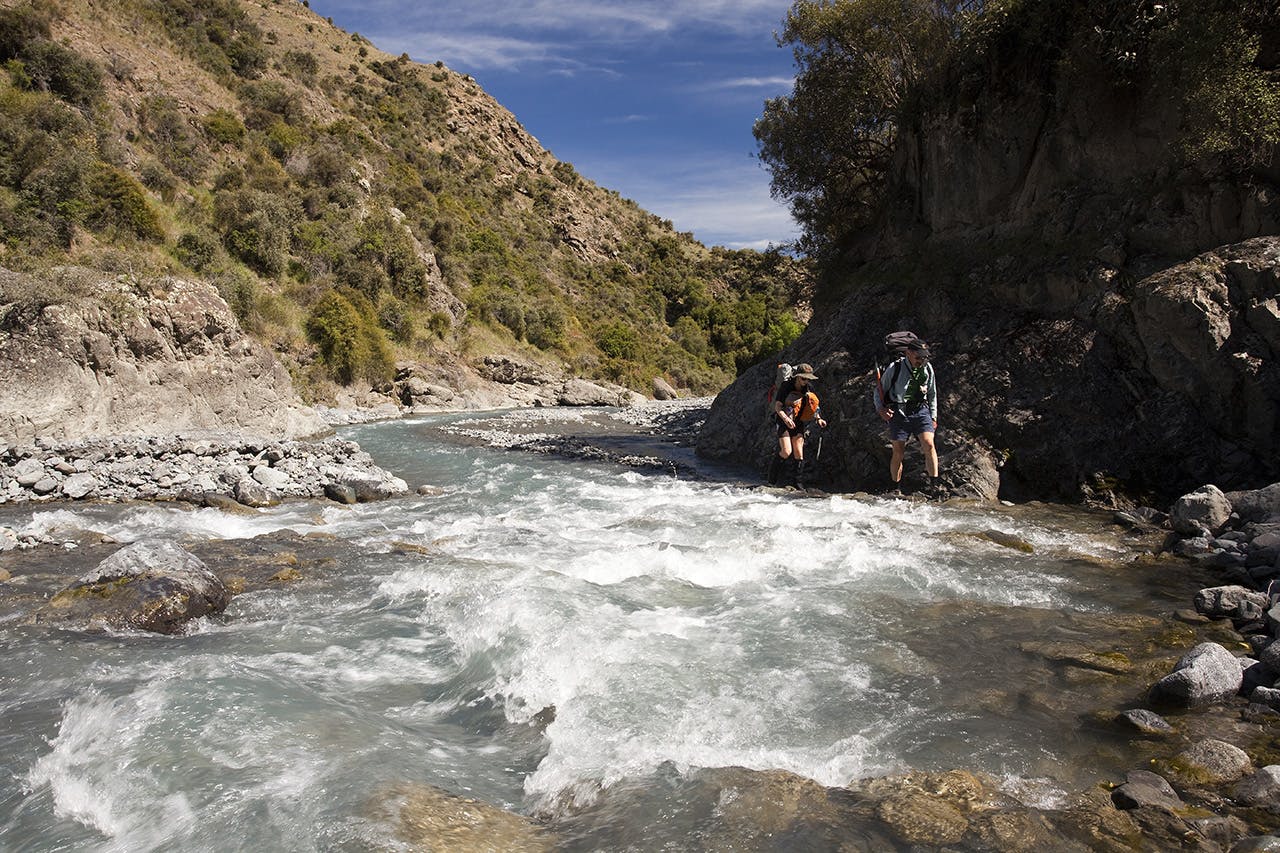 He had climbed the target of our trip, but his were not the first feet on Tapuae-o-Uenuku. Back in 1849, two Europeans made the initial attempt, but one of their Maori guides fell to his death. In 1864, a party led by Nehemiah McRae succeeded, leaving a five pound note in a bottle on the summit. Nowadays, more than 400 climbers come here every year to scale this so-called ‘tramper’s mountain’. It’s become a rite of passage for many a mountaineer.

Five hours upstream, we were moving as a tight unit, criss-crossing the turbulent torrent as it sliced through an ominous gorge. As the landscape steepened, the force of the current on our thighs intensified, so we teamed up to tackle the most dangerous fords. I counted 92 crossings on our first day.

Topping out of the second gorge, we were blocked by a waterfall. A quirky blue plastic marker indicated a rough sidle track on the true right. Alas, this ‘up-and-over’ was steep and eroded. After a small age, we clambered onto a narrow path that soon dropped through a copse of totara into the river. A couple of clicks later, we spotted the twin Hodder Huts ahead, perched precariously on a grassy rib, high above the Hodder. After washing the sun cream from my face, I shouldered my swag and made the the final climb of the day – a spent force. Sleep deprivation had us all hit the pit by 8pm.

“Wake up, Ray!” Andrea thumped my sleeping bag at the ridiculous hour of 5am. I pretended to ignore this vivacious extrovert, but soon succumbed to the allure of a warm cuppa. It was a case of mind-over-mattress. We downed a quick breakfast, laced our boots, and departed by 6:30am.

Five figures sidled scree slopes above a frightening slot canyon, where white water surged through, hit a wall, and bounced around a bend.

Half an hour later, we hopped over the Hodder to a prominent rock cairn. I verified our position on a GPS, while Simon located the solitary marker pole where the track climbed above the mouth of Staircase Stream. Many parties miss this because the route is merely a light ground trail, marked with sporadic cairns.

We filled drink bottles under a waterfall, and reached the foot of the first snowy slope. Crampons were fitted to our boots, poles swapped for ice-axes, and we began a slow plod up the hill. We reveled in perfect cramponing conditions and zigzagged up the 30-degree slope to alleviate the strain on our calf muscles.

Until now, my mood was somewhat pessimistic. I held scant hope of reaching the top of Tappy. But as I launched my middle-aged body forward, inch by precious inch, the odds were swinging in my favour. Somehow, whatever it took, come hell or high-water, I would give this my best shot.

Eventually, we clambered onto a broad snow plateau for an early lunch. Behind us, the menacing north face of Mt Alarm reared above the head of Staircase Stream. To the west, the rock pyramid of Mitre was equally impressive, being the highest point on the aptly-named Red Hills. Before us loomed the summit spire of Tapuae-o-Uenuku – within spitting distance, but a full hour away. 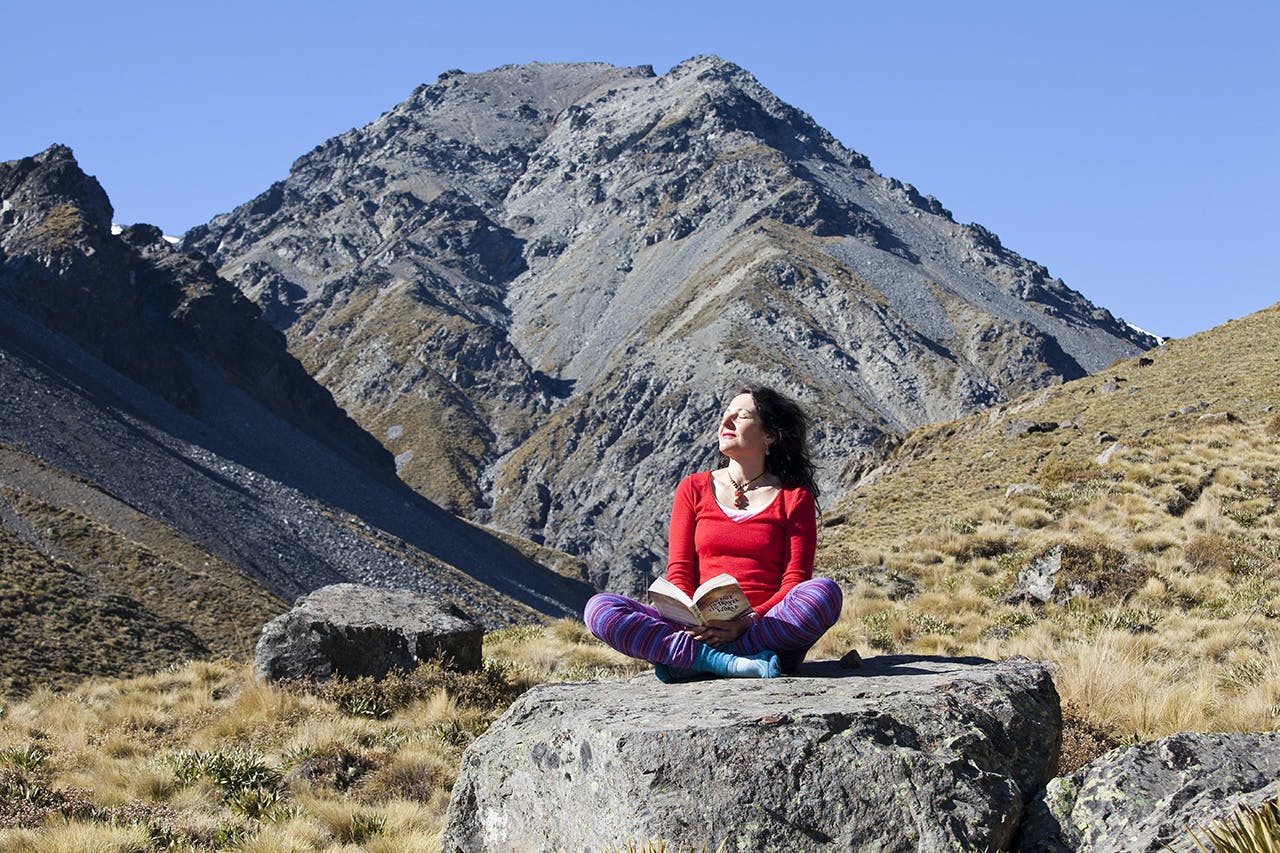 After photographing the colossal mountain architecture, I stowed my camera and followed the footprints of my friends. Four tiny specks climbing a perfect ridge of firm snow; a sort of dress circle arcing to the east where Tapuae-o-Uenuku rose in a shadowy silhouette. I measured the angle of ascent to be only 45 degrees; nothing too technical.

Clouds rolled in; the heavens had that hung-over look before an impending storm. The colour of the landscape desaturated into a monochrome world of white snow and black rock.

Positive self-talk psyched me out of a paralysing paranoia. “I can do this!” Mental discipline was required to stay upright in this vertical domain; to stay focused; to stay safe. More than a few accidents have happened there.

Finally, six hours after leaving the huts; 23 years since my first foray; there I was, happy on Tappy. At 2885m, this is the highest peak in New Zealand north of the Southern Alps. A smidgen taller than Mt Ruapehu, it is now my altitude record.

From our lofty vantage, we gazed over Cook Strait to the North Island; westward to the Richmond, Arthur and Raglan ranges; eastward to the Seaward Kaikouras.

We didn’t find any five pound notes on the summit, and with the weather closing in, we down-climbed, losing altitude efficiently, glissading down the softer snow to the rocks below. In our minds, we had ‘knocked the beggar off.’ 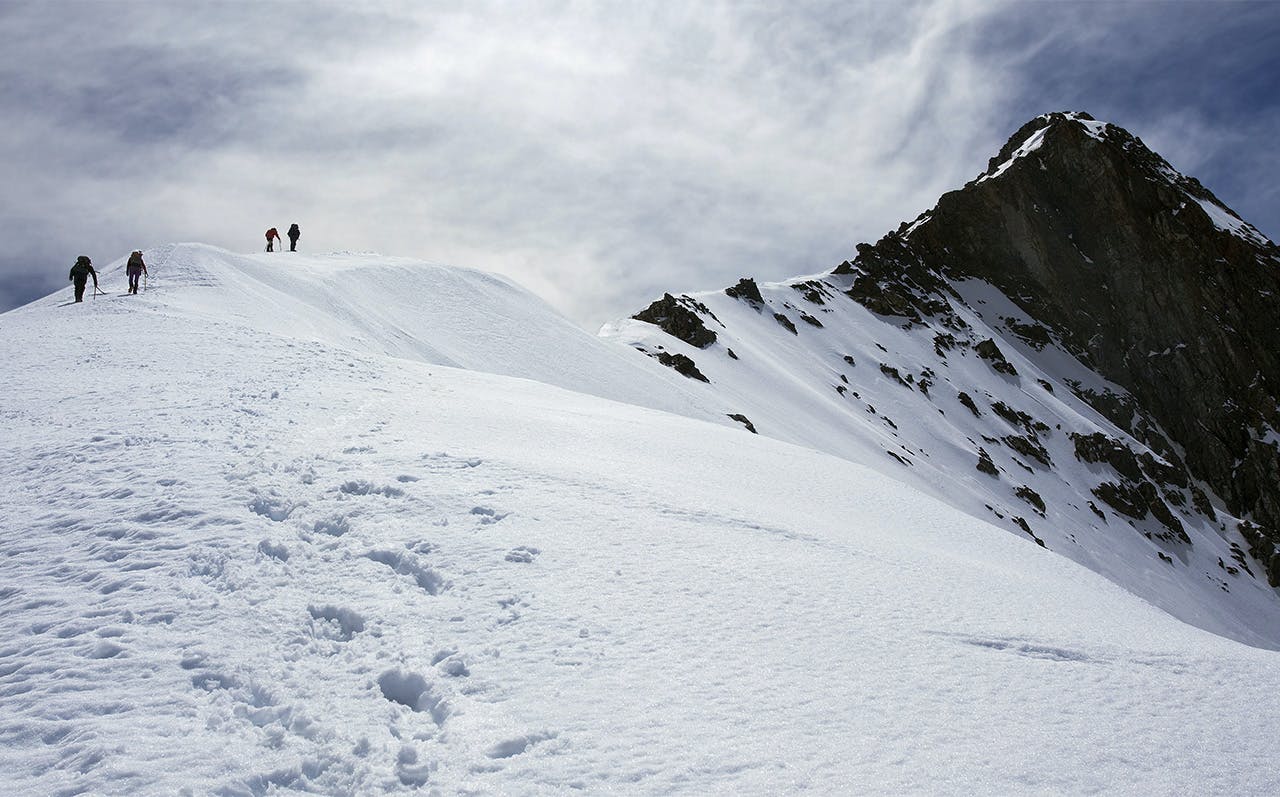 Then, in an inspired moment of organised spontaneity, our leader produced a golfing iron. Bizarre! Simon set up a snowy tee and demonstrated a smooth swing that Lydia Ko would be proud of. Out of his bag came five golf balls – one for each of us hackers to slice, chip or hook into the Clarence Valley far below. (Or, into the rough, like I did). After a few Mulligans, my dribbler barely left the fairway.

We continued our descent and on the very last vestige of the winter’s snow, which was undercut by a hidden watercourse, I fell through the thin crust, yelling a warning to those behind me. Then I tripped up, head over heels. “This is the most dangerous place on the mountain!” I exclaimed, as Pat impulsively leapt onto the perceived safety of the adjacent boulder field. But his crampon caught. I watched in horror as he skated over jagged rocks. In slow motion he performed an acrobatic marvel: three desperate steps then a somersault into the soft snow. We held our breath, relieved when our club president finally stood, grazed and shaken. A handful of Panadol and plasters were dispatched.

We made fast progress toward the huts. Still not out of the woods, we had to ford the Hodder River before reaching safety. Crossing in jandals, Andrea found herself chasing her dubious footwear downstream, with Simon in hot pursuit. They were eventually rescued from an eddy, and reunited with their owner.

It had been an epic, 10-hour day. Back at our base, the billy was boiled, and rain began to fall. Sleep came quickly.

Rest days are the best days. As a warming sun inched over a ridge, we did our domestic duties, read books and shot photos. All was well with the world. Eventually, cabin fever flushed my four friends outside to explore the valley head. By nightfall, the Hodder Huts were engulfed in swirling cloud while we played 500 and argued over Scrabble.

“Wake up, Ray!” Pat roused me at the ungodly hour of 3am. But this was no nightmare. My captain informed me the mist had cleared and the stars were shining. I sluggishly put on my shoes, beanie, jacket and fingerless gloves, then headed outside. A stone’s throw from the hut, I set up my camera and stabilised my heavy tripod with a sack of rocks.

It was a moonless night with no wind or dew. The hut windows were illuminated by a solitary candle, the thin blue walls lit by the beam of my headlamp. While holding down the shutter for eight-minute exposures, my camera recorded the southern sky in all its glittering glory. I watched the Milky Way burn through a blackening sky. The wind sang a song through the tussock. The river roared. I was grateful to be alive. Our expedition had been perfect, to a tee.

All photos from this trip… 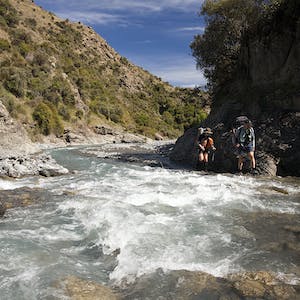 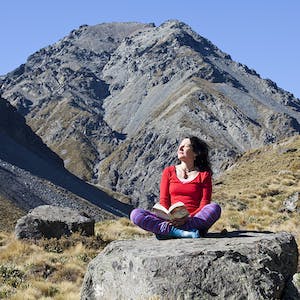 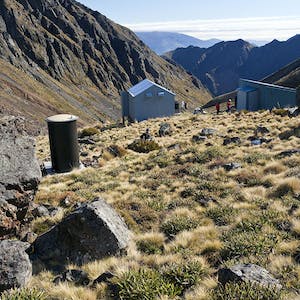 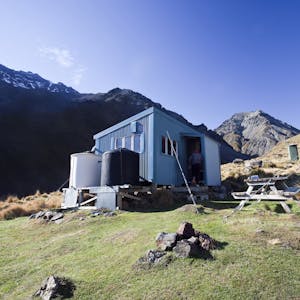 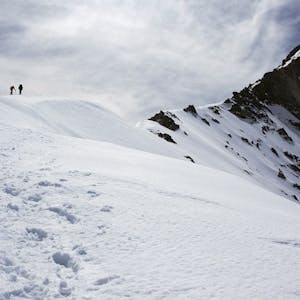 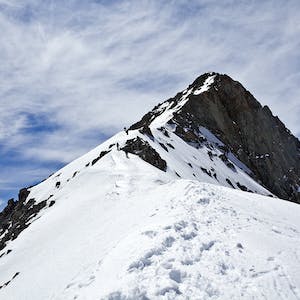 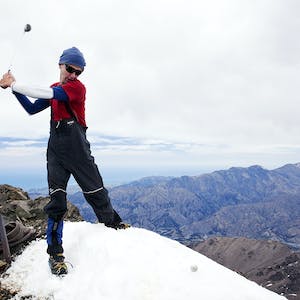