Links/Files
Download the route notes, maps and GPX file for this trip

THE EXTENSIVE HILL country of southern Marlborough is frequented by few, mainly just hardy hunters. The Raglan Ranges are really the ugly sister of the beautiful Nelson Lakes National Park, further to the west. But for those adventurous souls seeking solace, or challenging new terrain, this neck of the woods is worth a look.

Friends from a local tramping club had explored this region five years previously, and I joined them on their repeat journey – a four-day circuit of Scotts Knob, which promised tops travel interspersed with valley tracks, plus a smattering of remote huts I could add to my list.

It was a moody morning when we arrived at the Leatham River for a bone-rattling ride over the slimy boulders. Our trusty 4WD was up to the task, and several more gnarly creeks were forded until we struck an impasse at May Stream. Here, packs were unloaded and thermoses emptied in an unscheduled morning tea stop. An hour’s brisk road-walk saw us cross the Branch River, knee-deep. The real journey had begun.

Hopping over the shingle fan, we located the old track up the true right bank of Silverstream. This proved easy going, albeit in wet boots. I was confident we would beat the posted track time of five hours. However, falling rain made for slippery progress, and the track was blocked by numerous windfall. Our boots carried us into steep country where every side-stream trickled off the mountain walls above, then surged through narrow gullies to the valley floor below. Each of these chasms had to be crossed carefully. At the site of a long-gone bridge, we passed our packs up a rock step to make the obstacle a bit less challenging.

After seven hours, the overgrown trail spat us out onto a grassy shelf, where Mid-Silverstream Hut squatted above the river. Kelvin volunteered to get the wood stove firing, while I fetched water for a brew. Five of us fit into the five bunks and enjoyed a well-deserved sleep.

Five years had elapsed since our trip leader had done this journey. Now in his 70s, his memory of the route was fast fading. An hour further upstream, we used a GPS to fix our position – at least this was accurate. My elders adamantly believed we should leave the marked track here. None-the-wiser, I oriented my topo map and took a bearing to follow, up into the beech forest.

Thankfully, the bush-bash was reasonable – for a while. I scouted ahead, searching for a suitable route up a spur. Broken branches were hurled off the path, as we inched our way upwards. We fought the pull of gravity, edging higher and higher toward the tops.

Four hours of hard yakka put us above the bushline. We dined on pita bread, cheese and salami, gazing at the stupendous sight of Scotts Knob (2160m), which dominated the valley. 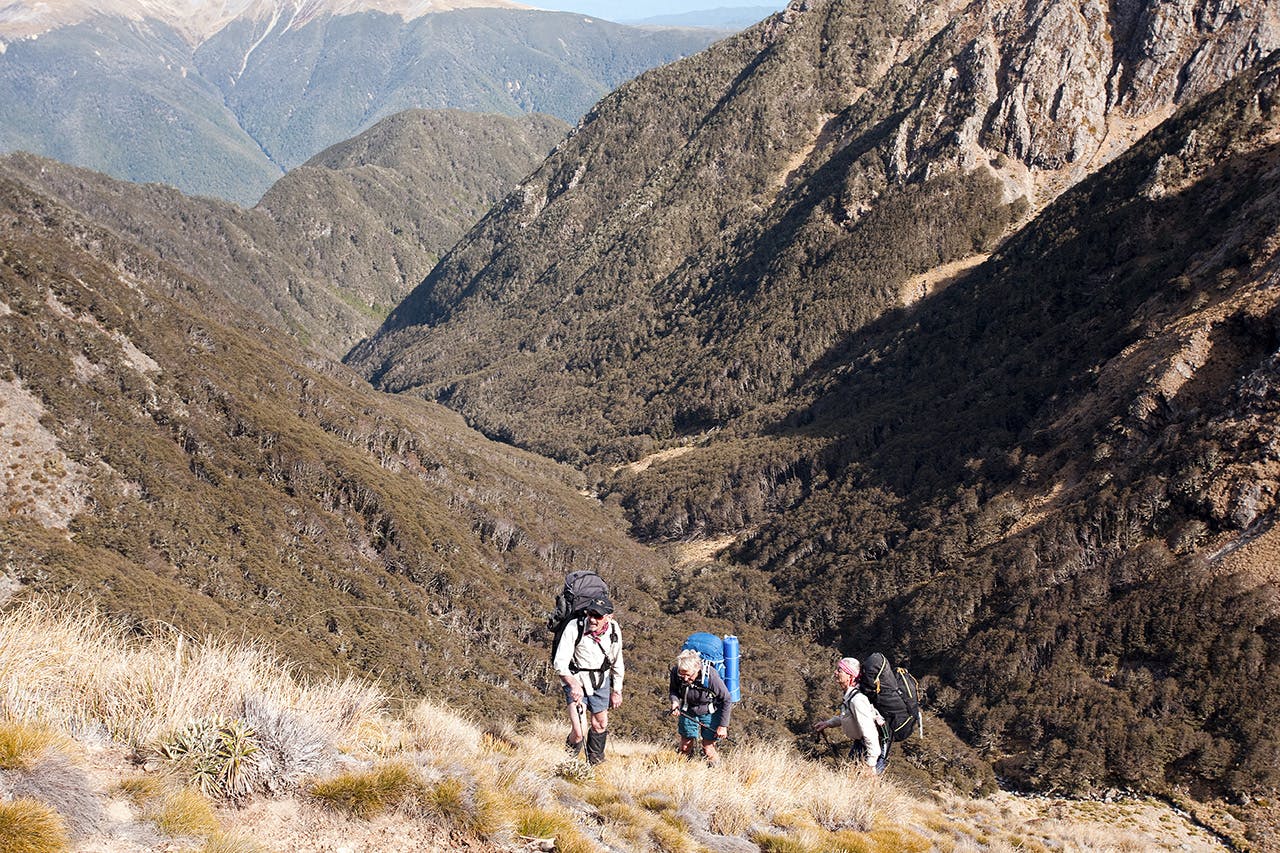 On the steep climb up from Bull Paddock Stream. Photo: Ray Salisbury

After lunch, we turned west, and soon the realisation hit the leader: we’d gone the wrong way. He admitted he didn’t recognise the terrain, but we chose to forgive his amnesia. We had no choice but to negotiate an undulating ridgeline which featured six rocky gendarmes, each of which had to be climbed or sidled. We worked together to solve each navigational problem. Fortuitously, the sun was shining and we had clear visibility.

Our tops traverse took us three extra hours, over Pt1662. My energy began to flag, as did my water supply. We pushed on up the hill, through patches of snow to crest the Raglan Range, where we breathed a sigh of relief. It was all downhill from there, slip-sliding along scree to a delightful alpine basin that sported a small tarn with a precious supply of water.

Descending into Bull Paddock Stream was a welcome change, threading through bluffs, bypassing waterfalls, clinging to snowgrass, weaving through thickets of wild spaniard into the roiling reaches of the river. A giant hare bolted from his hutch. We headed for the diminutive Bull Paddock Creek Hut in the distance; a lonely dot beside a silver ribbon of river.

Finally, after an epic 10-hour day, we arrived at the tiny two-bunker. Tents were pitched in the forest while Marie and I settled into the hut. We were only the ninth party to visit this remote hideaway in nine months.

Our leader woke and said he “remembered” his earlier route. Distrusting his failing memory, I located our position with a GPS. Following a compass bearing, we crashed through sparse forest, soon back into the alpine world of grass and rock where we zigzagged up a steep spur, clinging to tufts of snowgrass to aid balance. We avoided looking down, determined to top out on the main range, where we collapsed in the shady shelter of a towering rock, near Pt1746. We spread out the map, got our bearings, and drank in a grand vista of the Top-of-the-South. The Arthur and Richmond Ranges were stretched before us; westward were the peaks of Nelson Lakes; eastward was the snowy summit of Tapuae-o-Uenuku.

While we waited for one of our septuagenarians, Mike scouted the route ahead. He guided us over an 1828m mountain top; a full kilometre along the eroded spine of the Raglan Range. Dropping down to a tarn for lunch, we spotted a pair of rock wren, flittering among the boulders.

It was early afternoon when our intrepid party reached an obvious saddle at the head of Lost Stream. A straightforward sidle took us above a line of bluffs before a nerve-wracking descent down a broad spur – the bottom of which disappeared from view.

A number of narrow ravines penetrated the cliffs, but which one would lead us safely to the valley floor? With nerves of steel, Mike and Pat vanished down a grassy gut, invisible. Marie and I clung anxiously to the flax and tussock, realising that we were off-route, again! Without a good head for heights, it was with much trepidation that we lowered ourselves into the gully, our boots searching for hidden footholds as we down-climbed vertical rock-steps. Then we bum-slid from tussock to tussock, inching our way slowly. Our progress was pathetic. 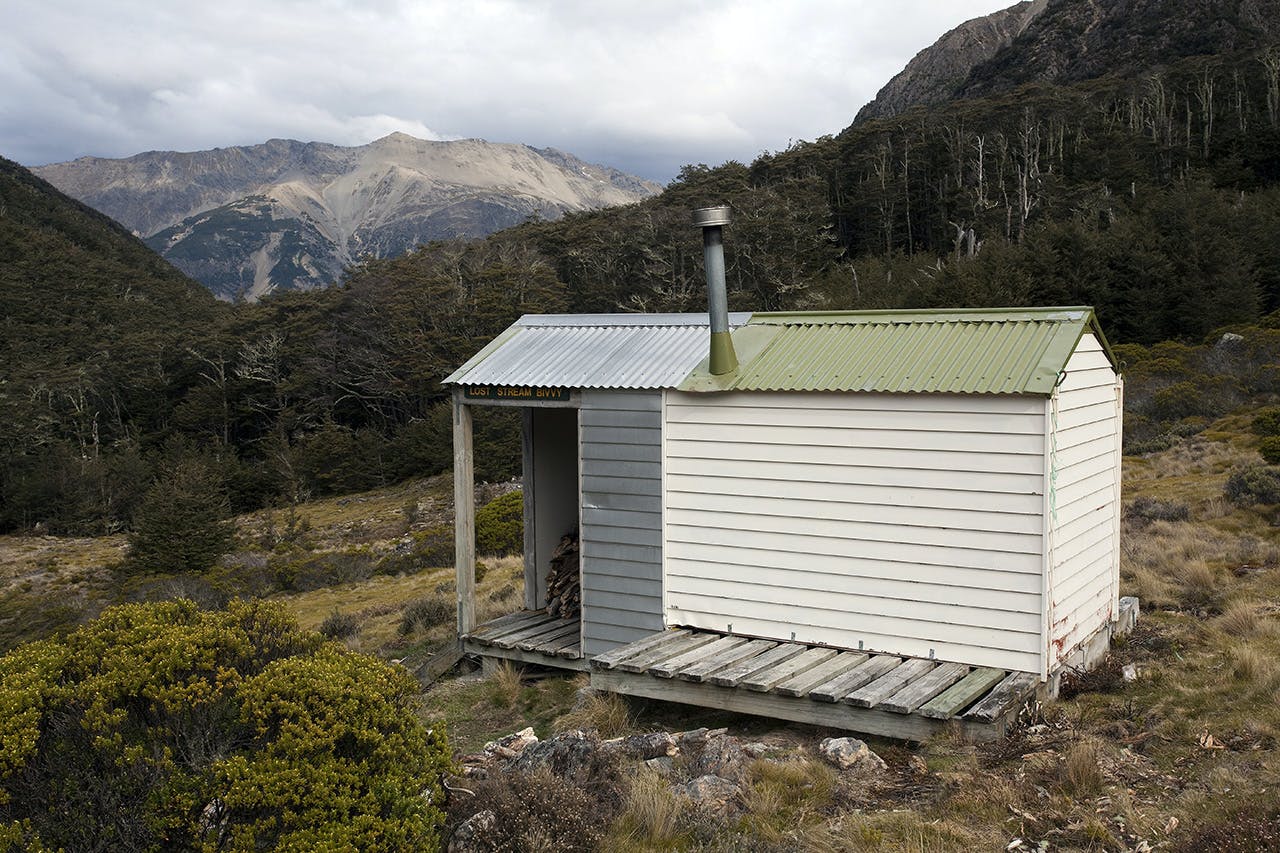 Below the bluffs, we gathered ourselves for a rest. Then we had some fun scree-running down a rocky chute. To avoid a waterfall, we were forced into fighting the spaniards and pushing a path through high tussock, eventually leading to a series of expansive river flats.

Monumental landslides have carved out the beech forest here. The rock debris was scattered like dice over the valley floor; burn-offs and overgrazing prevented forest regeneration. In the 1960s, the New Zealand Forest Service did trial planting of exotic pine trees in this catchment in an attempt to stabilise the slips. Unfortunately, the pinus contorta was too successful, and huge tracts of land are now plagued with this unwelcome species. Somehow, Lost Stream has avoided much of the invasion – it truly is a forgotten paradise.

I love tramping through open beech forest. I love the rich green moss that carpets the rocks and tree trunks; the old man’s beard hanging from stunted limbs; the sound of birdsong; the noise of boisterous cascades, bouncing down feeder streams, following the path of least resistance, to the main watercourse. I utilised old animal tracks to find my way down-valley.

We were delighted to discover a dilapidated fly-camp, decades old. A rotting NZ Railways tarpaulin hung from a timber frame. Hundreds of rusted cans littered the vicinity, reminding me of the ‘good old days’ when we were instructed to ‘bash, burn and bury’ our waste.

A few cairns led onto a high terrace, punctuated by ancient rock slides. I weaved through matagouri to find Lost Stream Biv, another two-bunker sited in a meadow of gentians. The rain tank was a luxury, but the woodstove was more useful as a seat. Numerous campsites were on offer, as my friends arrived and pitched their tents. Marie and I made ourselves at home inside the hut, although there was barely room to swing a possum. 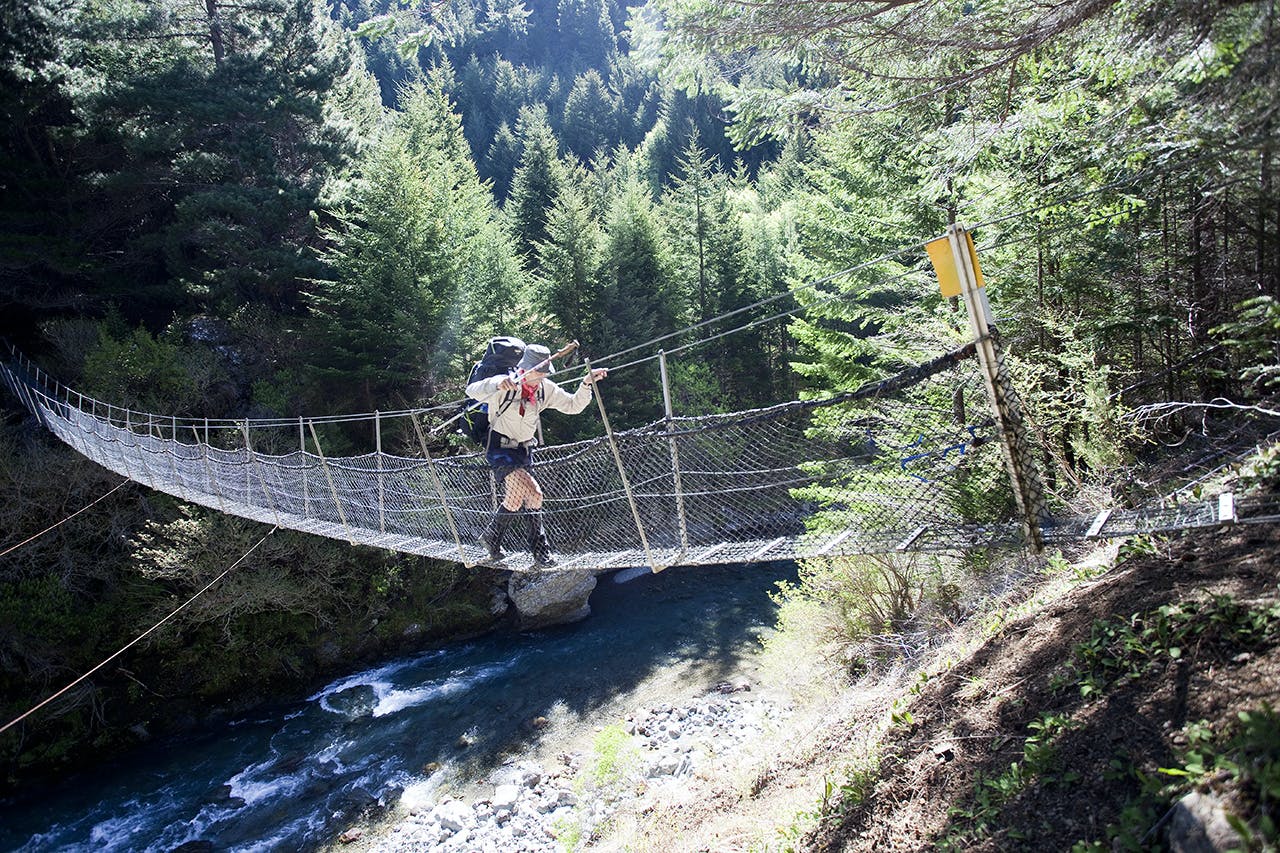 In the subdued evening light, we gazed up the valley, admiring the raw beauty of this isolated backwater. This spot exuded the airy ambience of another world.

Our last day saw us walking through enchanting beech forest on an easy trail, thanks to maintenance by DOC. We romped alongside the gurgling stream and stopped to photograph an impressive waterfall. I chatted with a tomtit.

A couple of hours passed, then we turned into the Branch River, where the track climbed over a series of bluffs. We boiled the billy, and escaped the glaring midday sun, inside Siberia Hut – a typical NZFS six-bunker, painted hospital white. According to local folklore, this place was so cold in winter that the deer culler’s tinned fruit would freeze.

Beyond this shelter, the track evaporated, so we splashed down the river to reach a new wooden bridge. From here, a tedious three-hour walk led along a disused vehicle track. An old, rickety swingbridge got us across a gaping chasm to Greigs Hut, a log cabin. In a fresh coat of paint, this 14-bunk lodge sits on a grassy terrace above the Branch River, and is popular with hunters.

The walk to the car seemed interminable in wet boots. However, we were happy to complete this tortuous loop around Scotts Knob. It tested our fitness, our friendship, and especially our navigation skills, but it was an unforgettable experience. 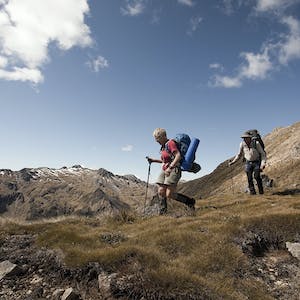 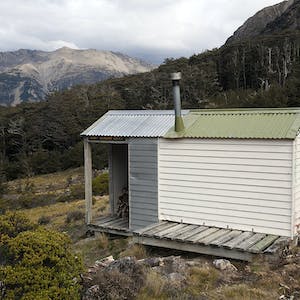 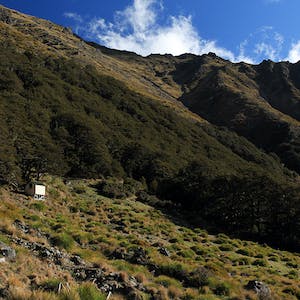 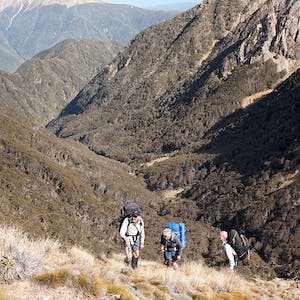 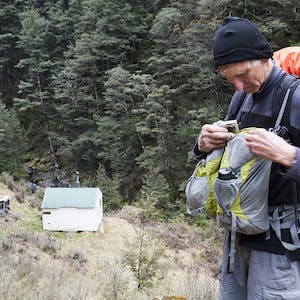 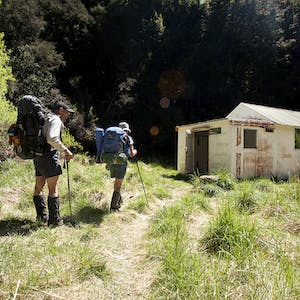 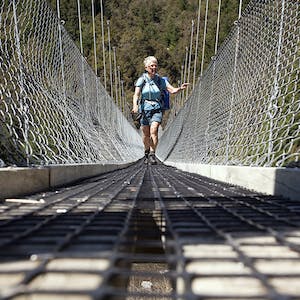 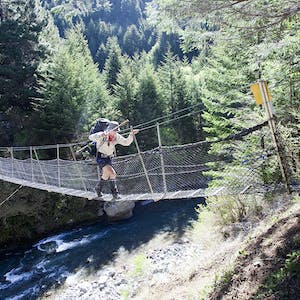