“Hang on a second,” exclaims Darryn, “is this a hut-bagging trip?”

Richard and I exchange glances. “No … no way, we’re going into some great country here, lots of pass hopping and spectacular scenery.”

“Yeah, yeah,” says Darryn, unconvinced. “So, how many new huts on this trip for you Shaun?”

Darryn nods resignedly. “And you Richard?”

“Seven. I’ve already been up the Lawrence and bagged three huts there.”

Halfway up the Cameron, Richard and I cross the river to visit Highland Home, a private hut owned by Lake Heron Station. Darryn shakes his head. He’s not getting wet boots this early in the trip just to visit an old mustering hut. We meet again up-valley.

Just on dusk, we reach Cameron Hut. Darryn and I are knackered, but Richard, 10 years our junior, still seems fairly fresh. There’s been a deceptive amount of uphill, and I’ve not been under a big pack for a while. Assorted jabs from various species of speargrass elicit a comment from Darryn that it’s a prick of a track.

But it’s a grand location for a hut, situated on the edge of a bouldery flat, surrounded by a horseshoe of moraine left by the receding Cameron Glacier. Remarkably, there’s a moraine ‘causeway’ that ramps up onto what now remains of the glacier, providing access for climbers tackling the jagged peaks of the Arrowsmiths. Great name for a range, I ponder, looking out at Peg Col, our destination the following day.

There’s not much of a sunrise in the morning and high cloud signals a wind pushing in from the west, sweeping over the main divide. By the time we reach the snow on the steepening ascent to the col, vicious blasts of spindrift sting any exposed flesh. A huge nor’ west arch forms with darkening clouds. The last bit up to the col steepens and Richard plugs steps in the soft, sugary snow.

After an exhilarating run down the snow into the upper basin of Jagged Stream, the sun emerges and we enjoy a pleasant lunch break. Alpine plants abound, the stream burbles and we have views of glaciers between mountains with names like Bastion Peaks, The Spires and Jagged. 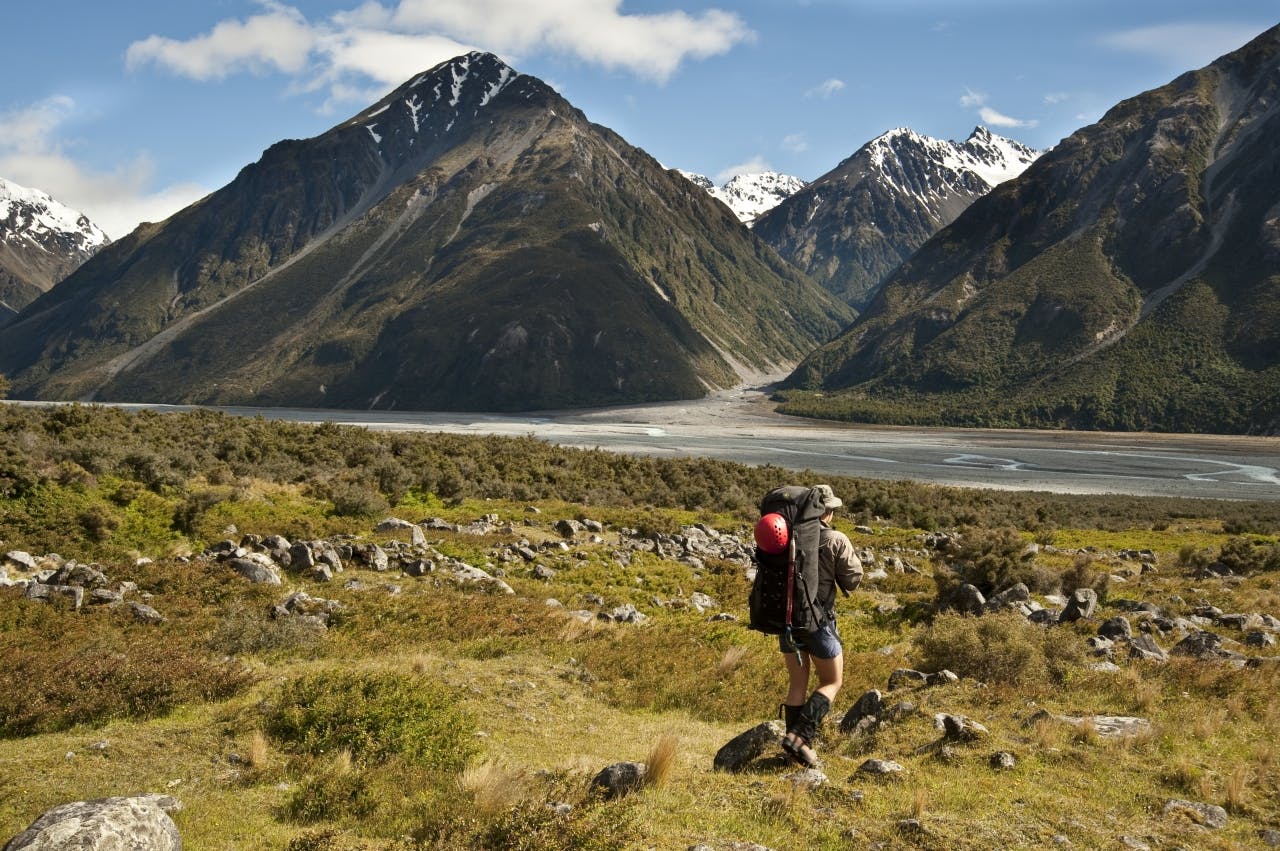 Lower down, the Jagged tumbles into a scrubby gorge typical of most eastern Southern Alps streams. We sidle high on the true right. It’s ankle-turning territory on a steepish slope, with matagouri and speargrass adding to the obstacles. Finally, after several hours on the move, we find a good scree slope to descend and intercept cairns that lead to Banfield Hut.

Like Cameron Hut, this is another Canterbury Mountaineering Club effort, built in 1950 after an avalanche wiped out a higher hut of the same name. In 2003, a CMC team revamped the hut, and they’ve done a fine job. Banfield sports red-coloured iron with yellow trim around the windows. It’s a cute shelter, tucked against the bush.

After the challenging terrain of Peg Col, we’re into a pleasantly flat plod up the Rakaia Valley the following day, with a stop at Washbourne Hut. I find my hut book entry from 16 years ago, when Rob Brown and I went over Whitcombe Pass. I’d forgotten what nice country it is here; many vegetated flats ensure there’s much less boulder bashing than many Canterbury rivers.

We rest in the shade of Reischek Hut, built by the New Zealand Deerstalkers’ Association in 1963 and named after 19th century Austrian bird collector Andreas Reischek. In the late afternoon we amble up-valley, awed by the assemblage of peaks lining the Main Divide across the river.

“Where are the prayer flags?” Richard quips, and at times the peaks do look almost Himalayan in scale.

The upper Rakaia is guarded by two large knolls, Jims and Meins knobs, that form sentinels on either side, right at the confluence of the Lyell and Ramsay rivers. We begin a hot slog up the track leading onto Meins Knob. Richard surges ahead, leaving Darryn and I in his wake.

On top, we bask in one of the Southern Alps’ most glorious panoramas. A great swathe of peaks arc around us, including the monumentally fearsome Ramsay face of Mt Whitcombe. Littered by tarns, the undulating tops of Meins Knob offer so many good campsites that we are momentarily flummoxed by which is best.

Although our onward route does not go past it, Richard and I opt to make a side-trip to Lyell Hut. Darryn thinks we’re utterly mad, as this involves a steepish 270m descent to the Rakaia, across a large boulder field, and then back up again. Get the route wrong and you’re in horrendous scrub.

“You mad buggers go and I’ll cook dinner,” he offers.

Fortunately we nail the route, and arrive an hour later at the historic Lyell Hut. It’s yet another extraordinary construction effort from the CMC, built in 1933 after club members spent eight-weeks lugging materials all the way up the valley. From historic photos in the hut book, it seems the vegetation has somewhat overtaken the site, which back in the 1930s had good views of the Lyell Glacier in the valley head.

Back at Meins Knob, a couple of kea investigate our camp but cause no more mischief than a desultory cry or two, whether in disgust at the lack of pickings or to annoy us, we can’t tell.

At 5:30am I rise to watch a golden dawn wash over the peaks of Whitcombe, Ramsay and Kinkel. It’s an extraordinary place, even by Southern Alps standards. Darryn concedes that it might just be more than a hut-bagging trip. 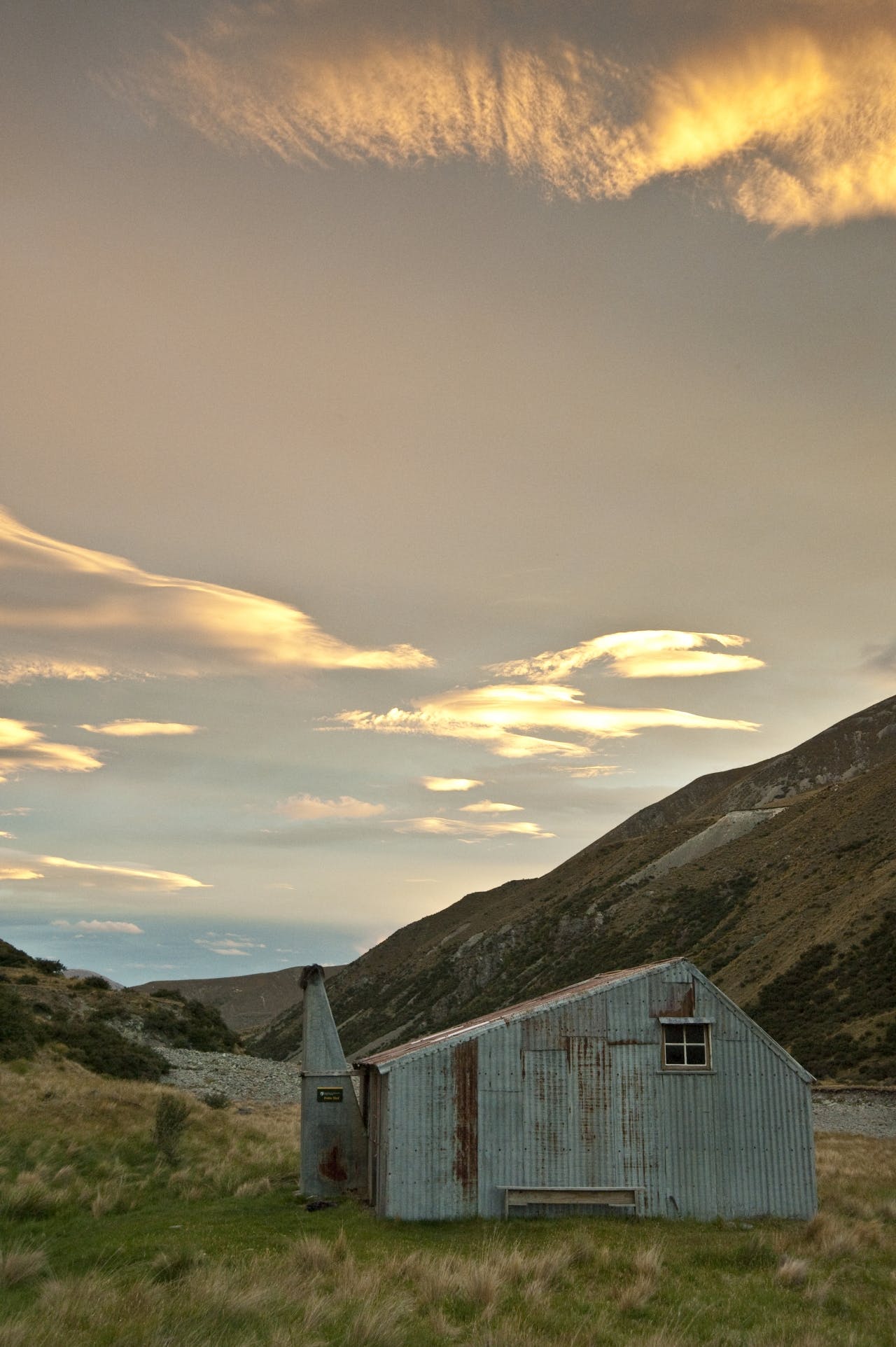 Our route will take us onto the Jollie Range, over Butler Saddle, and into the Lawrence, a tributary of the neighbouring Rangitata Valley. It’s a solid 600m climb, but pretty straightforward, except for a bit of navigation to avoid bluffs at the 1800m contour.

Samuel Butler, pioneer farmer of Mesopotamia Station, and his companion John Baker, were the first Europeans to reach the saddle, from the Lawrence, but never made the descent on the Rakaia side. Nearby Chowbok Col owes its name to one of the main characters in Butler’s famous novel Erewhon.

With a cool breeze filing through Butler Saddle, we don’t pause for long and within minutes have descended hundreds of metres over soft snow slopes on the far side. Lower down, the tributary narrows, almost into a gorge, but our passage is eased by massive amounts of avalanche debris partially filling the valley floor.

Darryn and I have tramped together for decades, but Richard is a much newer tramping companion. Small groups of friends often learn how to tramp together and after a while develop the same set of skills. So it’s always interesting to see how a new chum does things. I notice Richard’s close attention to detail, always consulting the map strung around his neck in a waterproof bag. Whereas I might only bother to get the map out when a problem presents itself, Richard is constantly assessing where we might make small gains in time or savings of energy by taking the most efficient route. It’s impressive.

The same scrutiny becomes apparent when we come to ford the Lawrence, clear but slightly swollen by snowmelt. Darryn and I are about to wade in across a rapid with poor run-out to enable a beeline straight down the valley. It looks fine, but Richard pauses. “You guys can cross here if you want, but I’m going to look for a better ford.” He heads off, having to walk extra distance because of the bend of the river. Darryn and I figure he must know something we don’t, so follow. At a later, safer ford, we cross together, linked up, and the force of the water surprises me. We’d misjudged conditions, and may well have been swept off our feet on the upper ford if it had not been for Richard’s caution.

We bypass both the resplendently orange Lawrence Biv, and Erewhon Station’s Hermitage Hut, and arrive somewhat footsore, wind and sunburned at Lawrence Hut. It’s a tidy ex-Forest Service SF70, spruced-up by DOC. To add to our burned exteriors, I cook a spicy shrimp noodle laksa, which fires our insides.

We are surprised to see three trampers following us in the morning. It turns out I know one of them, Al Fastier, who was at Lincoln University with me in the early 1990s. He and one of his companions are completing a Southern Alps traverse, and yesterday followed our footsteps over Butler Saddle. The pass doesn’t very often get two parties over it in the same day.

After an exchange of stories, we farewell Al’s party, as we’re leaving the Lawrence, headed for our third pass. We’re taking a little-used route that we’d worked out by examining the contour lines on our map: up Shingly Stream to a saddle near Pt1599m, where we could sidle around and over the Potts Range, avoiding some height gain, to reach Potts Valley. En route we have good views over the Clyde and Cloudy Peak Range, which true to its name has gathered a fine collection of hogsbacks over its crest. 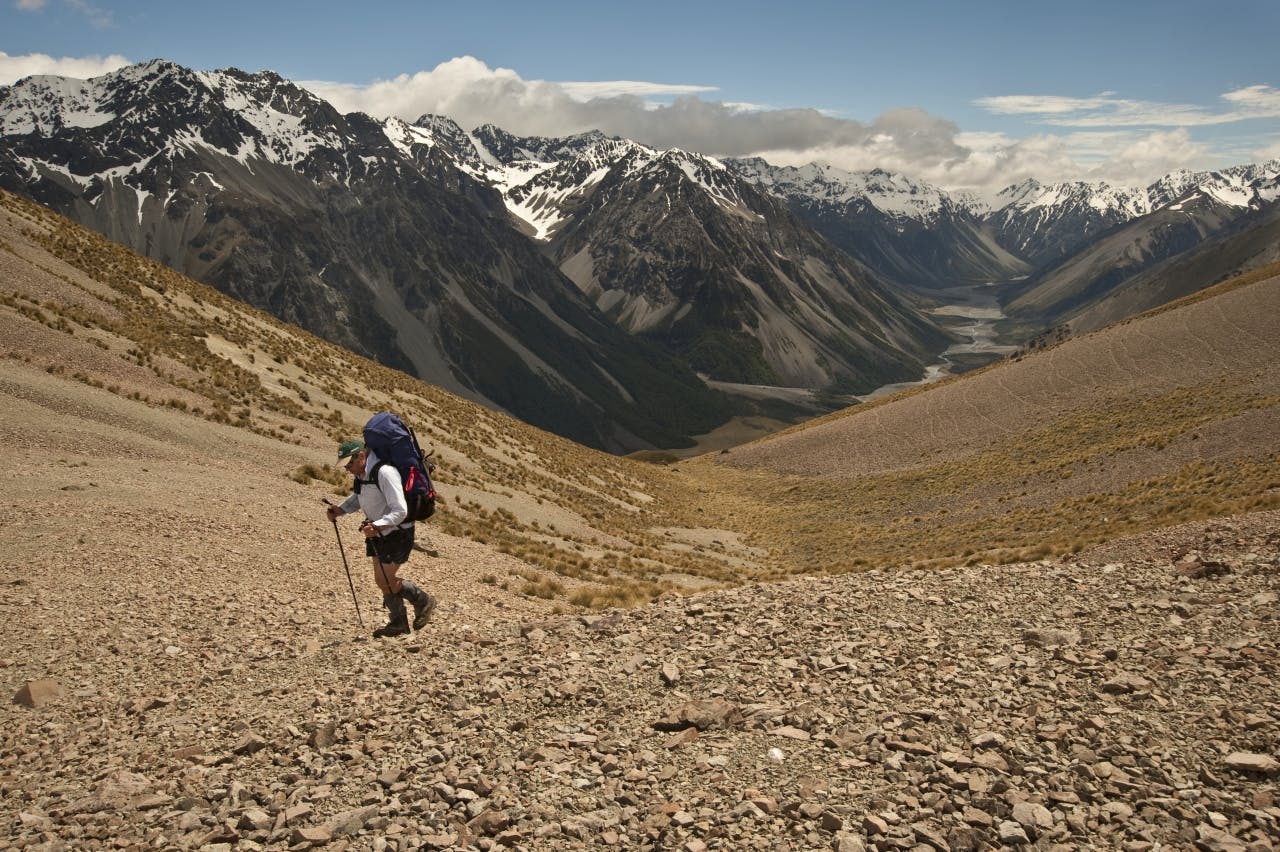 The Potts has an altogether different character to any of the other valleys we’ve so far tramped through; great tussock terraces high above the riverbed, with bare rocky slopes above. No forest or glaciers here, reflecting the valley’s situation in the rain-shadow of the Alps. Potts Hut, an ex-mustering hut of unknown vintage, has bunks for 10. Some of the corrugated iron has graffiti dating back to as early as 1904. A solo tramper from Hong Kong is in residence and he seems pretty pleased with the unexpected company. By some miracle, the bloodthirsty sandflies outside don’t find their way through the numerous holes in the iron, and we remain unmolested.

Another day, another pass. In mist and little wind we navigate our way towards the Big Hill Range, across an extensive flat river terrace. Too much talking and not enough attention sees us momentarily off route, which only becomes apparent when an unexpected pyramid of tussock looms into view out of the mist.

Richard wants to head 180 degrees to the direction I reckon is right. Darryn agrees with me, debate ensues, Richard reluctantly concedes, and fortunately I’m right. Higher up, with the mist clearing and our location confirmed, we crest the range at a lowish unnamed saddle above Stumpy Stream. Easy travel leads down to the Ashburton River, which is wide and open like the Potts, but without the huge river terraces. Tenure review has seen the valley transfer to DOC management, and inclusion in Hakatere Conservation Park. Top Hut is another ex-mustering shelter, and a fine one at that. Three Over Forties Tramping Club members from Christchurch are in residence, and they tell us that the last muster in the valley occurred that year.

Our last day, and last pass. Down-valley we reach Wild Man Hut, still used and managed by Arrowsmith Station. We pause to examine the hut, which was built in the 1950s, and find the long drop sports the sign ‘Wild Man’s Thunderbox’. High country humour.

We follow a fenceline onto the Wild Mans Brother Range, which saddles into the Cameron. After an initially easy descent, the going gets harder and we each choose a different path. Darryn opts for ‘first class’ with a smooth run through tussock, while my route is decidedly ‘second class’ with some spiky plants. Richard manages ‘freight class’ with a hefty band of matagouri and other nasties.

By now, back beside the Cameron River, we are on familiar ground, having completed our circumnavigation of the Arrowsmith Range. All that remains is a plod back down the track to our vehicle. We’ve wandered for 80 or 90 kilometres, crossed five passes and come back fitter. Not bad for a bunch of desk jockeys.

Richard and I have also raised our hut-bagging tallies… just don’t tell Darryn.