I’m plodding up a mountain, sweat trickling from my temples in tiny rivulets, my sunglasses steaming up and my shirt sticking to my back. Dorota, way ahead of me, is walking steadily, confidently, hands on her hips to keep her armpits ventilated. When we stand next to each other, the top of her head is barely above my shoulder and she must be at least 10kg lighter than me, yet her pack is the same size as mine and her pace faster.

We are heading for Gillespie Pass on the east side of the formidable looking Mt Awful, 2192m. Below, the Young River, like a silver ribbon, winds through the valley floor. I grab anything I can – rocks, hebes, tussock – to pull myself up the near-vertical wall. The distance between me and my friend increases until she disappears out of sight. With only thin mountain air between me and the precipitous drop, I risk my life fiddling with my camera to take photos. When I finally reach the top of the pass, Dorota is not there. I stop to rest and enjoy the magnificent views from my vantage point. But this alpine wonderland is not exclusively mine for long, as other trampers reach the top and walk past.

At 1500m, Gillespie Pass is the highest point on this track with Mts Alba and Awful dominating the skyline. Huge boulders lie scattered along the ridge and although it’s summer, there are large patches of snow everywhere. Cold wind forces me to put on my parka and gloves.

My journey began two days earlier when I drove to Wanaka to meet my Polish friend Dorota, a keen hiker from Christchurch. 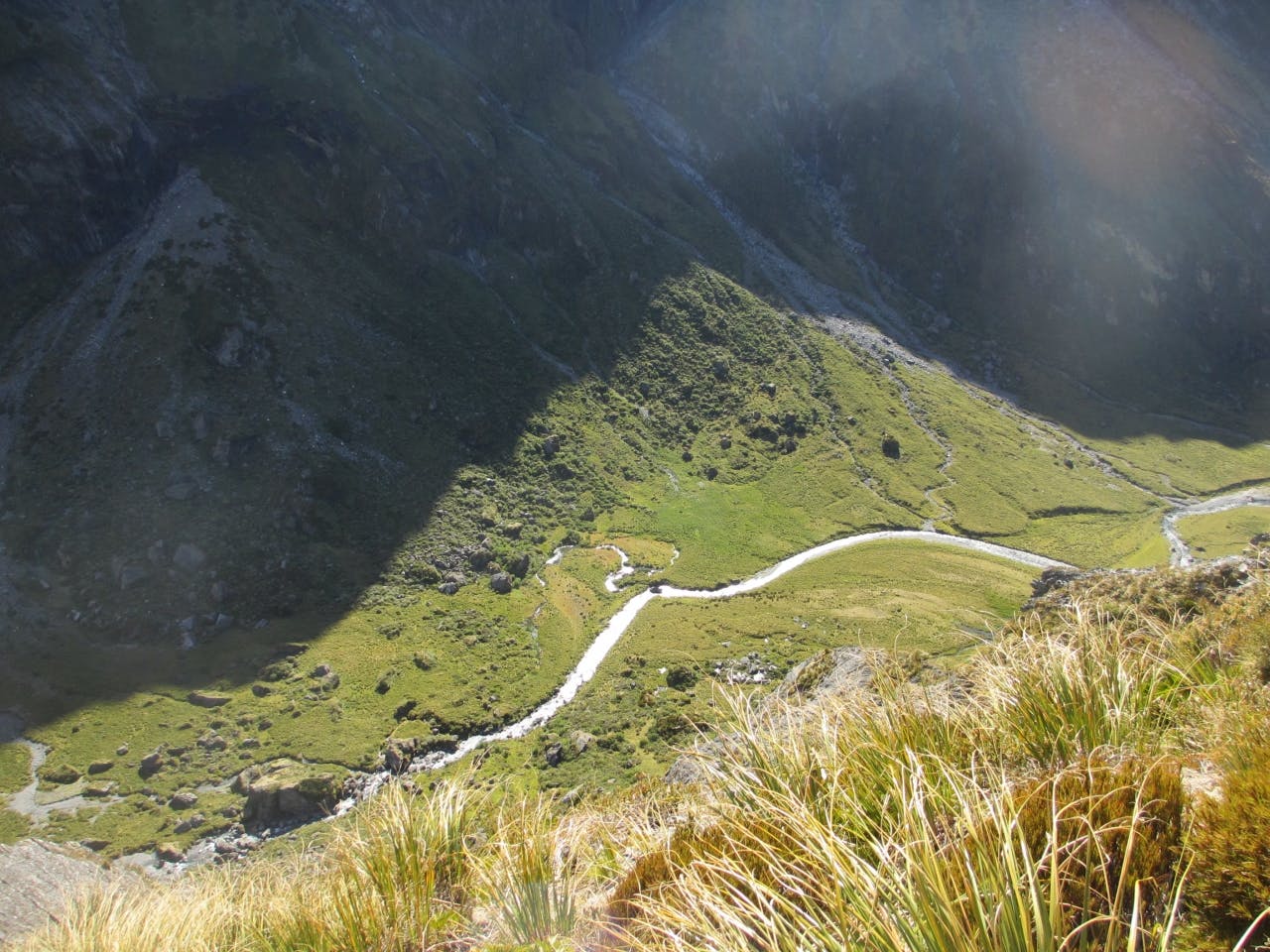 Our destination, Makarora, a small village nestled amongst the mountains on a river that shares its name, is easy to miss. We stayed the night at a chalet there and early next morning pondered whether to take a jet boat across the Makarora River or save our money and cross on foot. In the end we took DOC ranger advice and splurged on jet boat tickets. As we bobbed up and down in the boat, we watched as a man with a fishing rod attempted to ford the river. Half way through, the water was only knee deep, but when we turned back a few minutes later, the river was up to his armpits and we looked at each other smugly, glad to have made the right decision.

The driver left us at the confluence of the Makarora and Young rivers, the starting point of our hike. The Young Valley is a fairyland of dense native forest and high peaks. The track follows the river’s true left, through beech trees dressed in moss and old man’s beard, to a swingbridge at the junction of the north and south branches of the Young River. The trail steepened and climbed steadily to the tree line.

Emerging from the last of the sub-alpine brush, we saw the headwaters of the river we’d been following all day. A huge grassy plain was spread before us, closed off by a craggy cirque at the head of the valley. Alpine daisies and mountain buttercups dotted the meadow, with cliffs guarding the basin on both sides.

After seven hours and 20km, we arrived at the 20-bunk Young Hut. Built in 2006, with its wood burner, stainless steel benches and two cosy bunk rooms, the hut is pure luxury to tired trampers. A wrap-around veranda provided plenty of space for drying boots and parkas, and even doubled as an overflow sleeping area.

We shared the hut with a French couple, a German girl, a few Kiwis and a group of Israelis who had just finished their army training. At dusk, the young Israeli men paced around the hut wearing tiny square boxes attached to their heads, which at first glance I took for torches. On closer inspection, I noticed another box attached to their left arm with black tape wound around the arm and the hand. When I asked one of them about this unusual practice, he explained they are prayer boxes used in a Jewish religious ritual.

Exhausted after the day’s exertions, Dorota and I retired to our bunks early, while the young internationals talked and laughed till late. 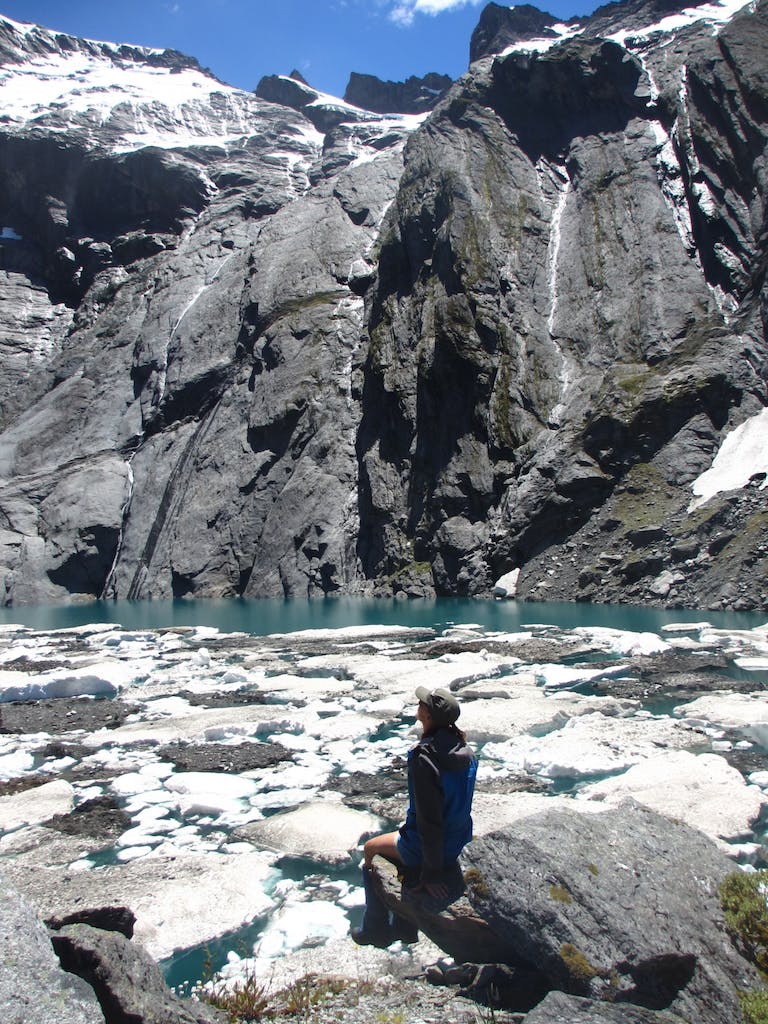 Next morning, we were off early. The track wound its way up the valley sidewall, under the majestic East Face of Mt Awful. We were in an alpine paradise, lured by its hanging snowfields and waterfalls.

Elated, I walked alone from Gillespie Pass down to Siberia Valley. In winter, this place can be waist-deep in snow, living up to its name. But on this brilliant day, I stopped at a secluded sandy beach by the Siberia Stream for a break and a snack. The sand felt warm and soft under my body and I soaked up the sun, resting my head on my pack for half an hour, before continuing on my way. I followed the river, trying to capture its aquamarine-clear water on my camera.

Brand new Siberia Hut (20 bunks) is nestled on the edge of the bush, facing north across the wide open valley towards Mt Dreadful, 2020m. In 2011, the old hut was destroyed by fire. A nearby picturesque waterfall splashed down to a perfect swimming hole (were it not for the ice cold water).

Dorota, standing on the deck in front of the hut, smiled at me. “Where were you?” she asked. “I was waiting for you at the top for half an hour, but I got cold and had to keep moving.”

I didn’t hold it against her, but wondered where this pint-sized woman got her strength and stamina from.

We planned on staying at the hut for two nights and spent the next day on a trip to Crucible Lake.

The weather gods were kind, granting us clear skies. Even so, crossing Siberia Valley, submerged in the deep shadow of the mountains first thing in the morning, made us shiver. We soon warmed up though, climbing steeply through the forest. As we reached the bush line, a view of the valley head and the moraine wall opened before us across a snowgrass flat. We walked through the sun-drenched valley, then scrambled up the rocky barricade until we reached the lake.

A geological marvel carved by the glaciers, Crucible Lake sits high above the Siberia Valley, nestled under Mt Alba. It surprised us with its cauldron-like shape and ice floats covering its surface. We spent an hour chilling out, literally, before turning back to reach the hut early in the afternoon. A cup of tea on the sunny deck was pure bliss.

An air strip near Siberia Hut, which dates back to the deer culling days, is still used by Southern Alps Air. The flight from Makarora takes visitors from civilisation to the heart of the wilderness in 25 minutes – a journey taken by a family who arrived at the hut on our final night there. We ended up playing cards with a chap called John and his grandson, who shared an entire chocolate cake with us – welcome generosity, as our own supplies were running out.

Although our last day was easy, we started early, not wanting to miss the boat. The track took us through open river flats and ancient beech forest. On level ground my long legs were an advantage and I easily kept up with Dorota. From time to time we stopped to look back at the great views of Mts Awful and Dreadful beyond the Siberia Stream.

After two hours, at Kerin Forks, we reached the confluence of Siberia Stream and Wilkin River, where we joined a group of other hikers waiting for the jet boat to take us back to Makarora.

Though the names of some of the local landmarks informed us of the hard times experienced by pioneering explorers, we were left with amazing memories of glorious landscapes, rugged mountains, pristine rivers and green meadows.

This area truly is a treasure, tucked away at the heart of Mt Aspiring National Park