Lake Rotoiti glittered in the sunshine of late afternoon far below, its bays and beaches rimmed with dense forested slopes. Robert Ridge soared up from the western shoreline to high bare tops.

Mike and I were trudging ever higher onto Nelson Lakes National Park’s St Arnaud Range, nearing Parachute Rocks where we planned to rest before the short push to the crest of the range and over into the large basins and tarns on the eastern flanks.

It’d been a long held plan of mine to traverse the range and its exquisite alpine cirques to reach the remote Arnst Basin at the range’s southern end. With a forecast of three days of fine weather, little wind and a summer high lodged over the South Island, it looked like my plan had come to fruition. Sure, you could do this moderate trip in most weather, but having perused the map at length and seen the basins from a distance, I was keen to do it in style, with two nights camped out on the tops.

Parachute Rocks appeared suddenly as we exited the bush to scramble up easily onto its modest crest, taking a break from our labours to search out some viewing angles of the Rotoiti district, where the arrow-straight furrow of the Great Alpine Fault cuts through the scene from south-west to north-east heading on up the Waiau Valley to Cook Strait.

We didn’t plan to get far on our first day, having already driven for five hours from Christchurch, so once we took our leave from the rocks we climbed the last 300m to the ridge and crossed into the first of the large cirques. On the ridge we discovered one of the many dozens of stoat traps which guard this outlier of the Lake Rotoiti Mainland Island. The traps, we discovered, are dotted along the crest of the range all the way to near the lake head, providing a first line-of-defence against marauding stoats intent on accessing the protected forests below. It’s a bold project, but with the forest through which we have passed not impressing with bird life, we were left wondering just how successful it has been. 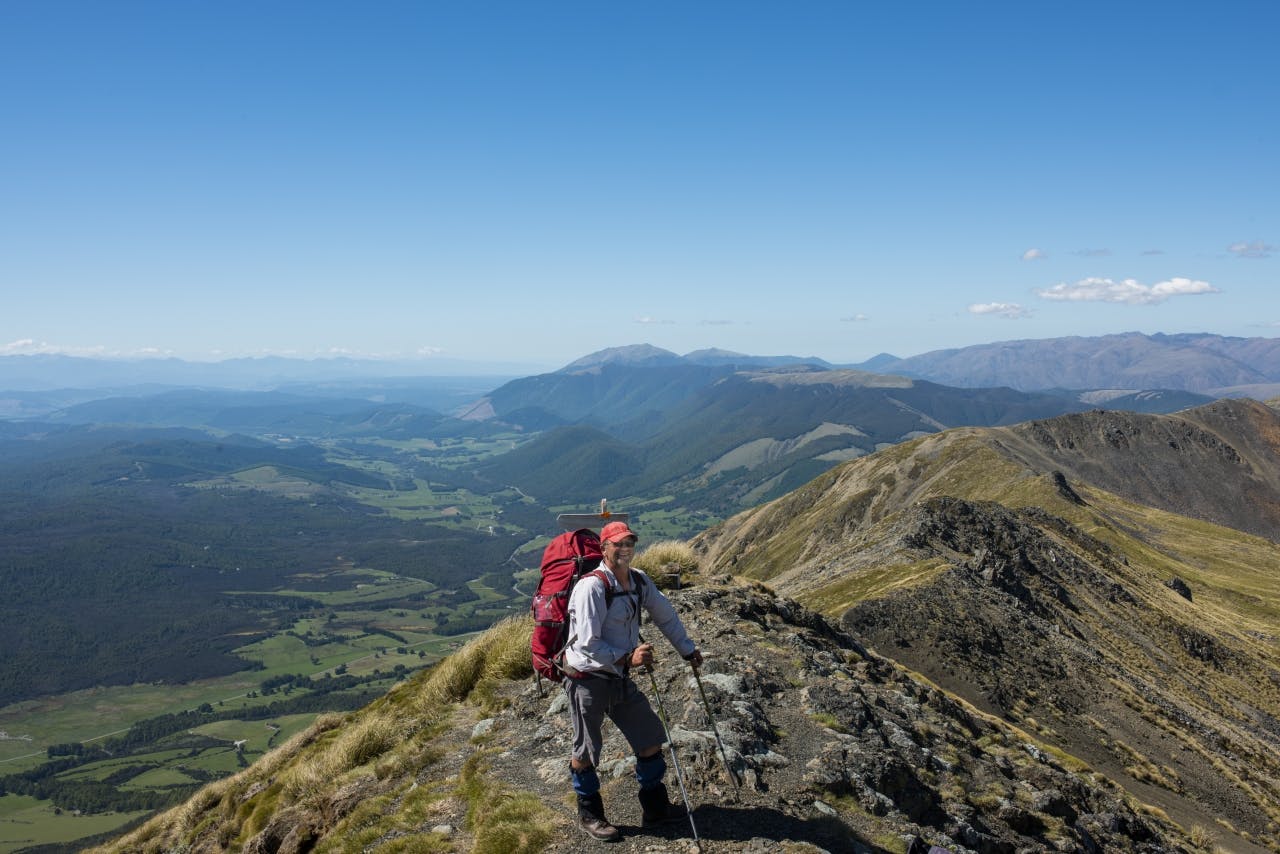 Tracking south over steep rock slopes, we headed through the top of the basin and crossed a shattered rib to the next cirque which promised better camping at one of the largest lakes on the range. This large, almost circular, 230m diameter, lake, lies at 1500m and is tucked into a broad tussock and rock bench below the range’s 1700m summits. It’s typical of the lakes that punctuate the grassy hollows here and stands at the cusp of a great precipice which falls away into the tributaries of the upper Wairau River. Importantly, it has grand campsite potential and we were not long in locating a grassy knoll just beside the rippled waters where we could pitch our tent and imbibe the beauty of the place. A hare scampered off as we approached, disappearing among the waving heads of golden tussock. Silence resumed its hold over the basin along with the somnolence of evening as the heat of the day began to dissipate and a gentle coolness settled over the mountains.

It’s a magnificent setting, especially considering, with the work of the day done, we could kick back in the tussock, brew a cuppa and plan dinner.

Later, we wandered along the rim of the lake to see what other surprises it held. The first was just behind our camp, where in a shallow depression a gin-clear lakelet reflected the light of the basin, transmitted by its emerald green bed – simply stunning.

Around the western rim of the lake, other tarns were revealed as were wider views of the Raglan Range, hovering in semi-darkness to the east, remote and mysterious. As dusk fell I climbed to the crest of the range to survey Nelson Lakes and Lake Rotoiti, now far below in the gathering gloom. As I watched, a sunburst illuminated the high ridges of the Travers Range and its landmark summits of Hopeless, Cupola, and Travers, still dappled with snow. The shafts of light scythe through the valleys to create intense pockets of radiance on the flanks of the St Arnaud Range raising every contour into bold relief. I lingered, reluctant to return to camp as the sun set and deepening shadows filled the void below. By the time I reached the tent, Mike was asleep so I heated up the billy for an evening snack.

With fine, hot days forecast we were anxious to be under way early the next day and were well along the tops by the time the rising sun caught us near the summit of one of the minor peaks. It wasn’t that hot, so walking was a pleasure and we made good time descending onto the tarn bench above Woolshed Stream where another large lake made an excellent rest stop. The scenery, both on the range and in the basins, was ever changing with hidden views into the distant Raglan Ranges and over Lake Rotoiti.

The route climbed steeply to two small passes which gave access to the northern rim of the deserted Rainbow Ski Field. 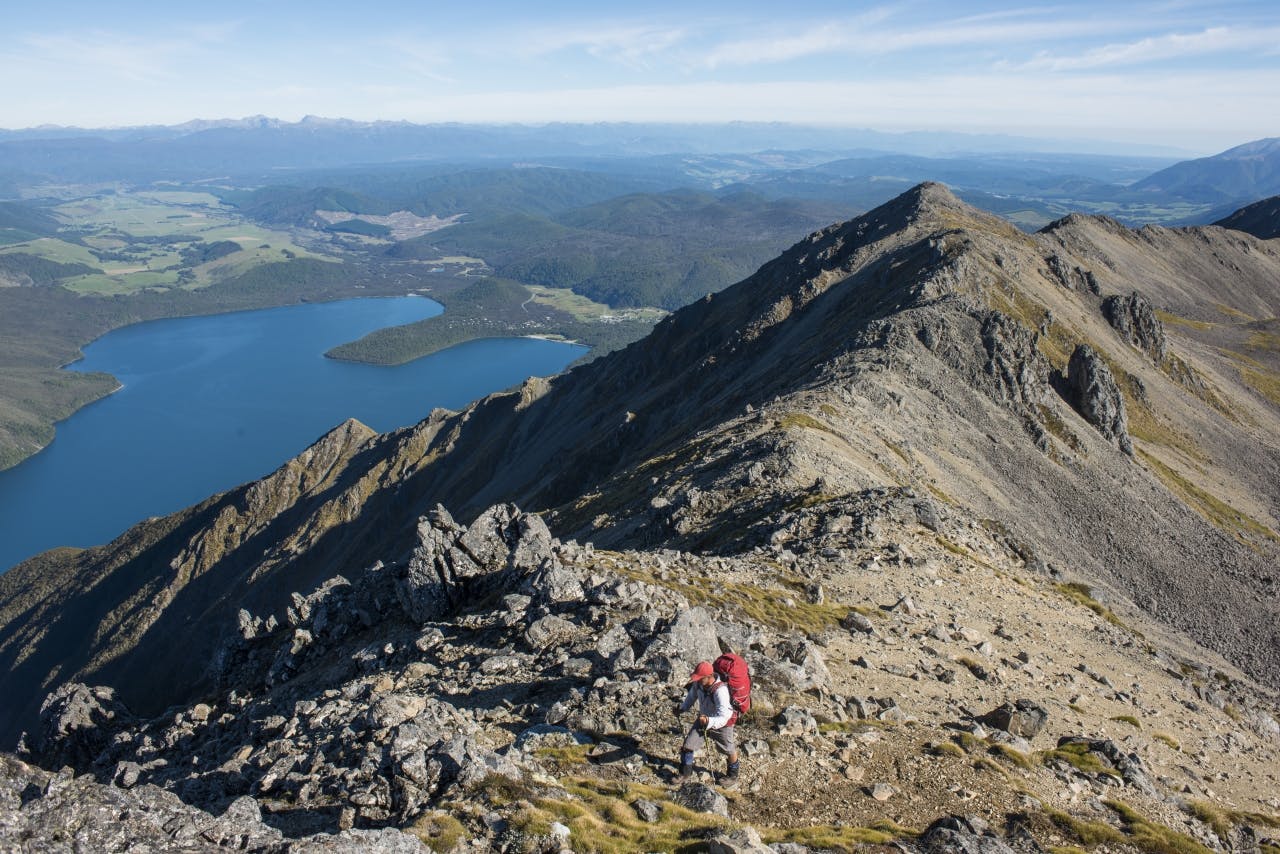 Climbing back onto the range top from the lakeside camp.

Picking a broad bulldozed ski trail, which cut around the rim of the field, we made quick time through the basin to reach the slopes of Mt McRae and, shortly after, the final pass perched at 1800m above the Arnst Basin tarns. The heat of the day had become intense and we were pleased to be able to descend the loose talus slopes to gain the basin and the hectares of lakes, streams, and hollows which fill the amphitheatre.

Making a beeline for the largest lake on the basin’s southern rim, we set up camp at a small cove near a cliff face. It’s a superb location and we had a long afternoon ahead to enjoy it and explore the other lakes.

From our camp at the lakeside, we could view the entire Arnst Basin, at least the more northern one at the head of the Arnst River. A second basin lies to the south, beneath Peanter Peak, with other smaller ones south again from here. Content to wait for the heat of the day to lessen before venturing out again, we spent our time reading and relaxing around the tent site.

The cool of evening brought a marked change: thick misty cloud pushing in from the west, its fingers slowly enshrouding the peaks and ridge tops so that by nightfall we could barely make out the far shore of the lake. Before the mist thickened, I made a note of the next day’s route out of the basin and took a compass bearing on the St Arnaud Range crest, behind our tent to the west, where we hoped to cross to the Travers Valley.

I needn’t have worried; by morning the mist had vanished, replaced by high cloud and a fire-bright sky – portent of the forecast nor’west change coming later that day.

Our exit point over the range was not, however, the end point of its rambling ridgeline which continues south for many kilometres, passing over The Camel, and though Begley Saddle, Kehu Peak, Rainbow Pass, and Mt McKay to reach the large tarn bench at the head of the East Sabine where it saddles with Rainbow River. However, much of this section is more of a mountaineering challenge.

A few random spots of rain targeted us as we began the final climb of the trip, to the crest of the range just 150m above. It was easy going and after the brief climb we were soon tramping the ridge, looking for a way down to the Travers.

Sporadic cairns guided us off the broad crest and into the Travers, lying in a patchwork of green and yellows 1200m below. There was ample space here, as we descended, for the magnitude of the Travers Range, its valley and Lake Rotoiti to be revealed, showing us a mighty spectacle of this most beautiful valley with its huge rock bluffs, massive alpine cirques, and thick mane of forest. 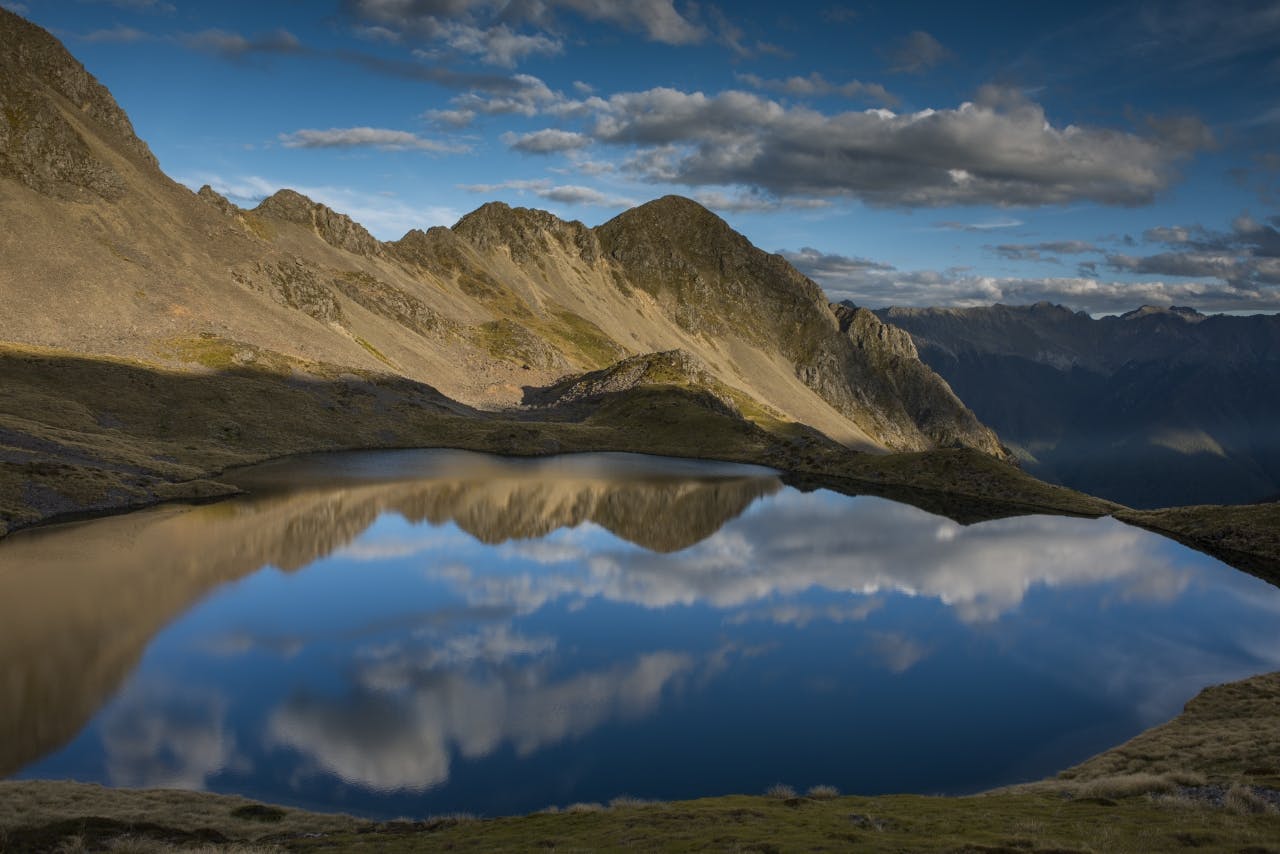 This large lake provided a perfect setting for the first nights camp.

At 1500m we spooked a young stag on a grassy bench. With head up, he departed at speed for the bush. Moments later we edged out onto the lip of an immense scree chute which penetrated way down the face into the bush. It’s also soft and made for good scree running so we lost height rapidly until the bush closed in again at the 900m contour. The final 300m of altitude drop to the valley floor were not pleasant. First there was steep, rough bush. Then small boulder fields filled with loose rubble. Finally, thick scrub and narrow gullies laced with creepers and bush lawyer. Our triumphant descent from the range after our spectacular traverse was somewhat blunted by this meagre 300m of hillside. Nevertheless we were soon enjoying mid-morning sunshine on the flats of the Travers Valley.

Better still we were on the riverside track and close to Lakehead Hut, where we planned to stop for morning tea. It was empty when we arrived; various parties had vacated it just that morning, heading for Lake Angelus and the lakeside tracks, so we took possession of its solitary location in the hot sun below the rugged gullies of Robert Ridge.

The cloud cover had completely rolled back to reveal a deep blue sky and not a trace of the nor’wester forecast. That left us with an easy lakeside hike around Lake Rotoiti to Kerr Bay where we took a cooling dip in the lake to mark the conclusion of our Arnst Basin adventure.