For most adults, the highest peak in The Remarkables Range is a tough, exposed trip. But seven-year-old Georgie Chinn enjoyed every moment – once the ‘boring’ walking had finished. Matthew Pike chats to Georgie and her co-climber…

When seven-year-old Georgie Chinn was short roped to her father on the slopes of Single Cone, her main motivation for reaching the top – even more than lollies – was having her face in the newspaper.

Her dad Derek had come prepared with a camera to capture the moment they reached the summit. And after three hours of scree scrambling and climbing, she made it.

“I like the idea of being famous,” says Georgie, who has since turned eight. “And dad said if I get to the top I’ll get in the newspaper.”

Single Cone (2319m) is the highest jagged summit on the famous Remarkables Range near Queenstown. It’s a popular climbing destination and a challenging ascent, especially for one as young as Georgie. But it was the sort of journey she enjoys because there’s not too much of the “boring” walking before the fun stuff.

“It’s better with the rope because I like the actual climbing, not the walking,” she says. “I say to the mountain ‘get on with the climbing!’.”

The climb wasn’t all fun and games though. “I had to wear thick socks and they’re so annoying,” says Georgie. “But dad made me wear them and I got very sweaty feet.”

From their Arrowtown home, the Chinns regularly drive past The Remarkables Range with Single Cone staring down at them. With Derek being an experienced mountaineer (having tackled some of the world’s highest summits, including Everest) and mum Lisa also a keen climber, the peak seemed an obvious choice to introduce their daughter to her first taste of alpine terrain.

The Chinns had already been on numerous overnight tramping trips and Georgie had experienced the indoor climbing wall and local bouldering crags. But this was the first real climbing  trip.

“Single Cone’s right there – it dominates the view,” says Derek. “Anyone who lives here makes it a contingency trip. It feels really alpine.”

Derek was careful to make sure conditions and choice of summit were just right, so as not to put Georgie off at a young age.

“It was a perfect day,” he says. “If Georgie didn’t enjoy it, then it wouldn’t be fun for anyone. She’s got to want to do it. There’s also the safety element too – small kids get cold pretty quickly.” 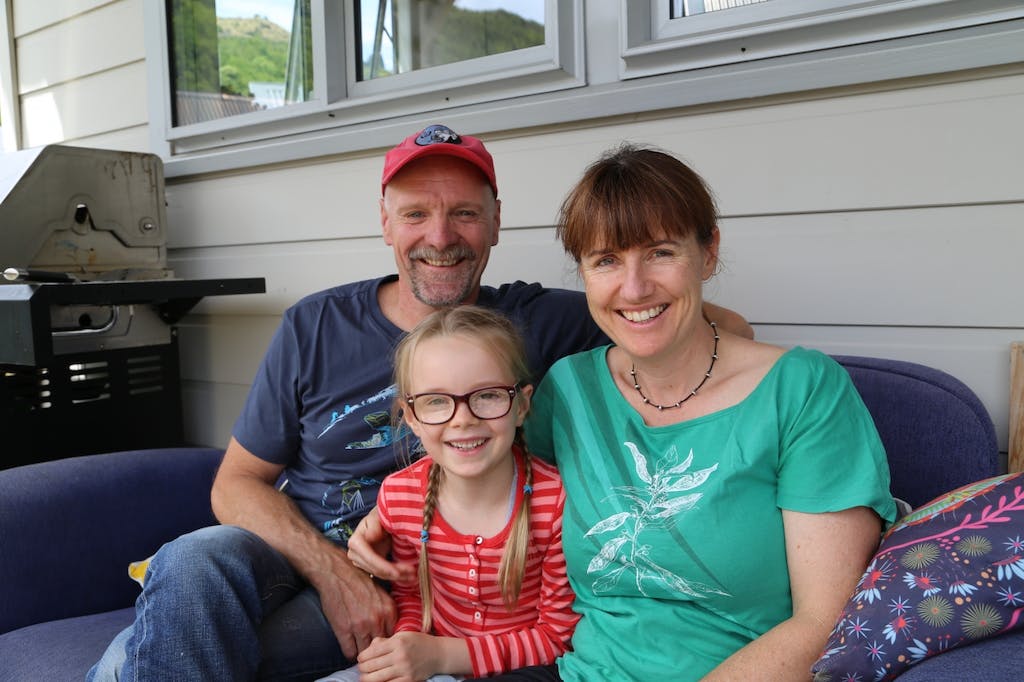 Georgie back at home with mum Lisa and dad Derek.

Derek adds that it’s important to go at an easy pace, make regular stops and make sure the kids are comfortable. Sweets also help. “Dad brought Fruit Burst,” says Georgie. “They’re chewy so he doesn’t have to keep handing them to me.”

“Having the kids wear climbing trousers with pockets in the thighs is also a good idea,” adds Derek. “It means they can store sweets as they go.”

Derek and Georgie climbed Single Cone via the north-east ridge and Neal McAloon of mountain guiding company Climbing Queenstown says there’s no easy way up. “There’s no walking route – every way is a hands-on experience.”

McAloon says the company takes clients up Single Cone, all of whom require experience and a good head for heights. “All our clients use ropes to climb it. They need good fitness and must be good with exposure. It’s certainly not a trip I’d say is achievable for families, but Derek is an experienced mountaineer and knew what he was taking on.”

The experience has inspired Georgie to further her climbing goals, though her current aim may have to wait a few years. “I really want to climb Mt Cook but dad says no because I’m not big enough.”

Derek says, rather than Cook, Mt Earnslaw may be possible in the nearer future if they find an appropriate day.