Paul Hersey explores the South Temple Valley and finds a similar, much safer, alternative to the popular Gunsight Pass trip

Epics or near-epics in the backcountry are a bit like going to the dentist – generally good after the fact.

And so it was with a recent trip I completed with my wife, Shelley. As we hadn’t been into the hills for a while, we decided on a fitness tramp: long, but not too long; a decent amount of altitude gain, but nothing too technical that would mean carrying a heavy pack.

The forecast for the weekend wasn’t particularly attractive. It had everything: sun, rain, cloud, but more wind and potential snow than we’d prefer.

I told Shelley of a tramp I’d done a few years earlier in Ruataniwha and Ahuriri conservation areas with my friend Tony Rac. It had been a similar, bitsy kind of forecast. Without knowing much about the terrain, Tony and I settled on a circuit, starting and finishing in the Temple Valley and crossing two alpine passes – one into the Ahuriri Valley, the other back into the Temple. On that journey, we had a bit of an epic second day, and I was keen to do the double-crossing again but in better form. That was the hope –it’s funny the ironies that life throws. 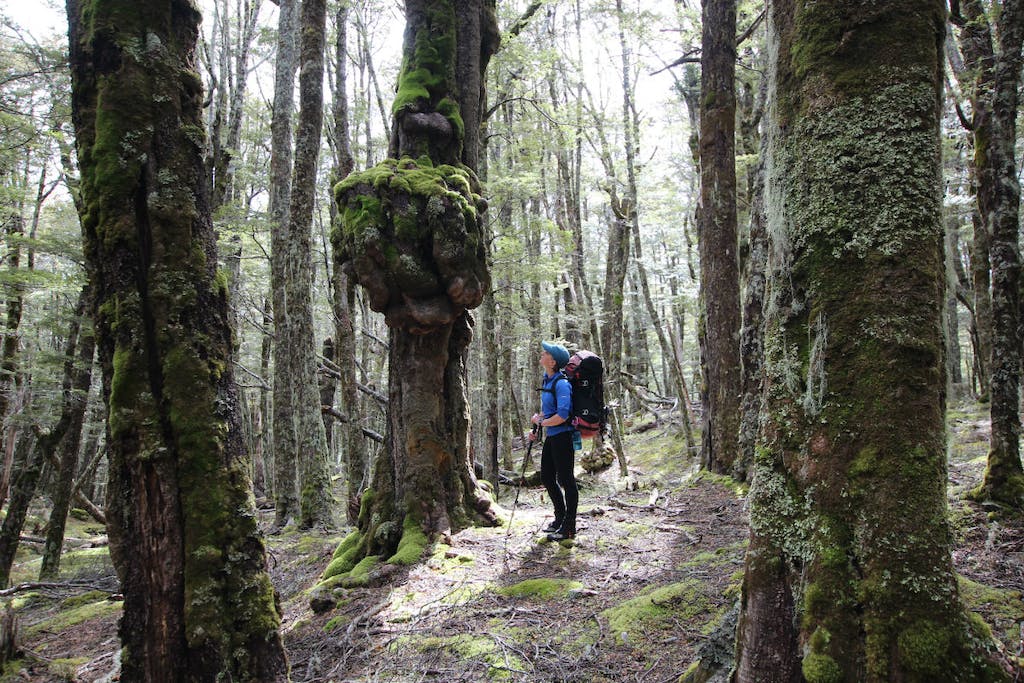 Temple Valley is accessed from near the head of Lake Ohau. In his Barron Saddle – Mt Brewster guidebook, Ross Cullen describes the Temple Stream North Branch as ‘an alpine world in miniature and one of the most accessible and attractive alpine valleys east of the Main Divide’.

The South Temple is more complex, with a number of tributaries and alpine passes offering access into the North Temple, South Huxley, Ahuriri, Watson and Maitland valleys. The South Temple-North Temple crossing via Gunsight Pass is a popular weekend excursion, although it is at constant risk from rockfall on the north side and, in certain conditions, snow avalanches on both sides.

The weekend trip Shelley and I did (and Tony and I) is an interesting, varied, and usually much safer, alternative to the Gunsight Pass route. However, it is much longer at two full days’ travel – or three if you bring a tent and are keen to make use of the numerous camping opportunities in the upper Ahuriri – and crosses two 1900m alpine passes rather than one.

To get a head start, we decided to walk a pleasant two hours through beech forest along South Temple Track to reach South Temple Hut on the Friday night. For those who like their tramps short and sweet, this lovely hut, set on the edge of a grassy terrace just above the stream, is a perfect overnight destination. 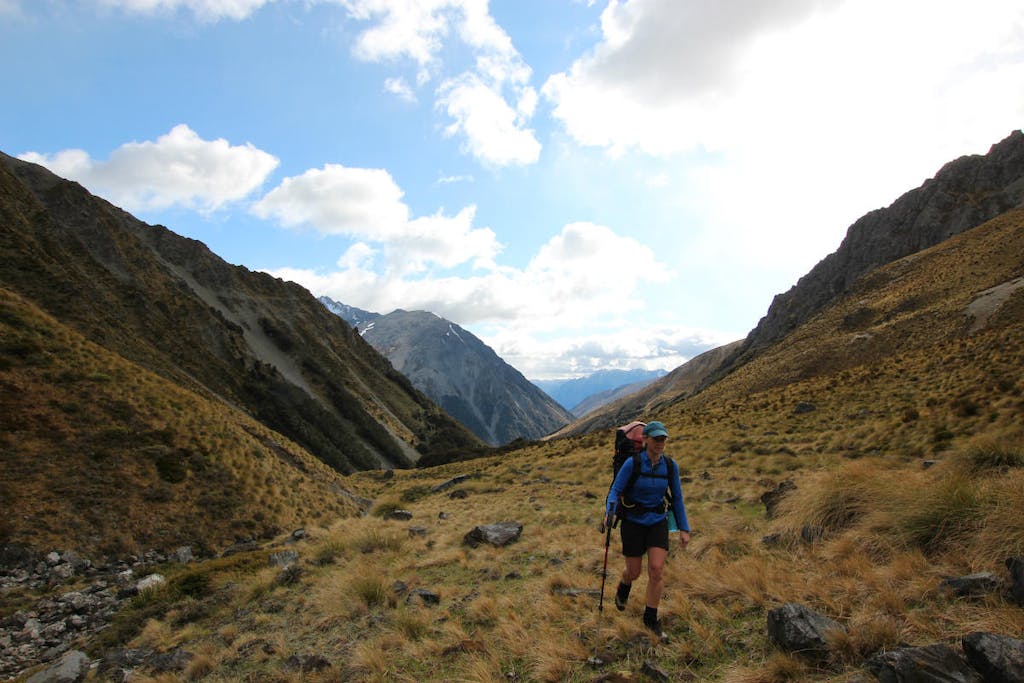 On the approach to the pass near Mt Maitland. Photo: Paul Hersey

The South Branch has three tributaries, the southernmost of which originates from near Mt Maitland, which towers directly behind South Temple Hut. The following morning, we started the steep climb up a grassy spur and then traversed through forest above the river to eventually reach the first of the weekend’s alpine passes. It’s just to the south-east of Maitland and between Pt 2222 and Pt 2090. When Tony and I did the trip, we had started late and ended up bivvying on a rather precarious knob of rock before the final climb to the pass, in less than ideal weather. Every gust of wind through the night had me nervously checking that I wasn’t sliding off the edge. Needless to say, it wasn’t a particularly good night’s sleep.

Low cloud and a strong westerly chased Shelley and I over the pass, leading to a branch of the Watson Stream catchment. A falcon flew by at speed, similarly buffeted by the wind. There was still plenty of snow about and we followed various tongues into the Watson, making for much nicer travel than the steep scree slopes. Certainly by late summer and autumn, this pass should be free of snow.

The Watson Stream catchment drains into the Ahuriri Valley. Before the Nature Heritage Fund purchased Birchwood Station to create Ahuriri Conservation Park, this valley would have had merino grazing its lush alpine grasses in the summer months. We traversed above a rather impressive, narrow gorge on the true left – a future canyoning adventure? – to reach the main Watson Stream catchment, and then another sidle through beech forest, before crossing a wide bushy plateau at 1000m and finally dropping into the Ahuriri.

Since management was taken over by DOC, the Ahuriri Valley has become a popular mountain biking destination, with easy travel and plenty of huts to choose from. At 70km in length, it runs down to the Omarama Plains and has numerous climbing objectives, including the impressive Mt Huxley towering at its head. The second pass Shelley and I were planning to cross was just to the east of Huxley and near V Notch Pass. 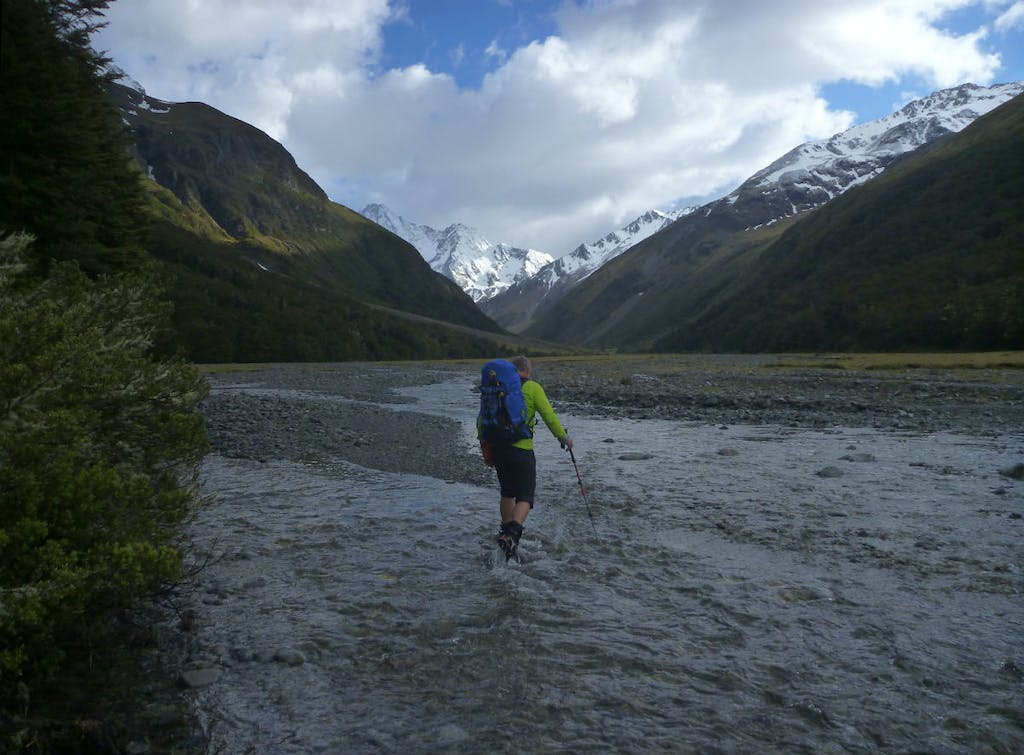 Heading up the Ahuriri with the low and high peaks of Mt Huxley on the skyline. Photo: Paul Hersey

Overnight, there was heavy rain and near gale force westerlies. And it was cold. We were snug in Hagens Hut, but wondered at the conditions we might be facing the following day. By morning, the rain had eased, but fresh snow plastered the tops. The wind was still strong, and spirals of snow were lifting off the windward slopes, drifting east like low slung clouds.

We were concerned about the avalanche risk heading over the pass into the Temple. But, with the alternative a very long walk down the Ahuriri to reach our vehicle, we figured it worth going for a look.

A strange thing occurred when we passed Top Hut. A kilometre or so downriver, I thought I could see something at the hut clearing.

“Either a deer or a person,” I said to Shelley, figuring a deer when the figure vanished in a hurry. A while later, when we were directly across from the hut, a lone person walked out from behind a bush at the edge of the clearing. I waved a greeting. Despite looking straight at us, the man didn’t respond. Dressed head to toe in camouflage gear, he just turned and walked back behind the bush again.

“Hope he realises we’re not deer,” Shelley said, glancing over her shoulder as we carried on up the valley.

Above Top Hut, there is some sneaky route-finding required to ensure the best travel upstream. This is not technical country, but an awareness of different options would make for easier travel.

Following the river, we eventually reached the huge scree slopes below Mt Huxley. Just before these slopes, a steep, grassy spur leads to broad terraces below the pass, between Pt 2058 and Pt 2190, that would take us back to South Temple. Once above the spur, travel was easy, with just a constant height gain to reach the pass.

Crossing the second pass back to the South Temple, Shelley and I were treated to an epic weather spectrum: sunshine, rain, sleet, snow and gales. Fresh snow was being stripped from the windward side of the pass and deposited to the east. Studying the potentially avalanche-prone slopes east of the pass, we were faced with a couple of uncomfortable decisions: whether to, and then where to, drop down to the Temple. Either side of us appeared to be loaded, but where we eventually chose to descend, the snow hadn’t gathered as much.

With an eventual sigh of relief, Shelley and I reached easier angled snow again. From there we joined South Temple Track, eventually passing South Temple Hut and returning to our vehicle.

On my earlier trip, when Tony and I crossed this pass it was almost midnight. We had made a decision to cross at night, when the snow was bonded as well as possible. But in almost similar conditions to Shelley and my crossing, we were buffeted by strong winds and forced to deal with loaded lee slopes. By the time Tony and I found somewhere to unroll our bivouac gear in the Temple, we’d been on the go for 18 hours.

By late summer, the Ahuriri-Temple pass should be clear of snow, and a much more pleasant crossing than we had. The pass is noteworthy for the stunning views of the south face of Mt Huxley.

In better conditions, this is a great and, hopefully, epic-free round trip. Be prepared for two 12-hour days though, sometimes following formed trails and at other times having to forge your own path. And despite the irony of getting bad weather over both of my trips, the quality of the route more than made up for it.