It’s not all tablets, video games and the internet for the next generation of New Zealanders. Edith Leigh finds many young Kiwis play an active role in conservation. In fact, it seems the future of conservation in Aotearoa is in good hands.

As a leader in the Kids Restore the Kepler project he loves seeing everybody’s ideas coming together and working as a team to tackle predator control in 3000ha of Fiordland National Park.

More than 450 kids in the Te Anau basin, from pre-school through to college, are involved in the Kepler project, which not only aims to restore birdsong in the Kepler Peninsula, but has a strong education focus.

Largely driven by the kids themselves, the project aims to inspire Fiordland’s young people to develop values, knowledge and skills so they can be confident, connected and actively involved in caring for their environment now and into the future.

Ten-year-old Jake Tither loves to climb trees and get outdoors with his dad. While joining the leadership team and taking an active role in the project hasn’t involved much tree climbing, he likes the idea they are helping to make tramping on the Kepler Track a better experience. “I think it’s really important that we try to look after the environment as much as we can,” he says.

With a quiet seriousness, 12-year-old Jessica Willans explains how they undertook recent research on cats. The night-time video recording and analysis to see if cats do cross into the national park sounds technical and I am impressed at just how much these kids are doing in what really is their own backyard. “I like learning about birds and getting out there more,” says Willans.

As members of the leadership team talk about the Kepler project – what they do and what they like about it – there are, of course, a few mentions of “time off school”. However, education coordinator Jo Marsh says learning is actually a big part of the project. The whole curriculum is covered: maths and geology as they work out and map numbers and densities of predators; art, writing and information technology to build a website, submit articles to the local community newspaper and design logos and marketing material; as well as learning practical and leadership skills along the way.
“It’s not just about the restoration,” says Marsh. “It’s about bringing the conservation back into the classroom to where it is easily accessible and connecting it with real life.

“The project is really starting to snowball now and pick up some pace.”

And it’s not just school pupils playing their part. Southern Stars Early Childhood Centre teacher Tarn Willans says they take four pre-schoolers out once a week to spend some time on the Kepler Track. “It’s right on our doorstep, just five minutes’ drive and they love it so much, looking for mushrooms and feeling the moss. Our four-year-olds know what a stoat is and that cats are bad in the forest,” she says. 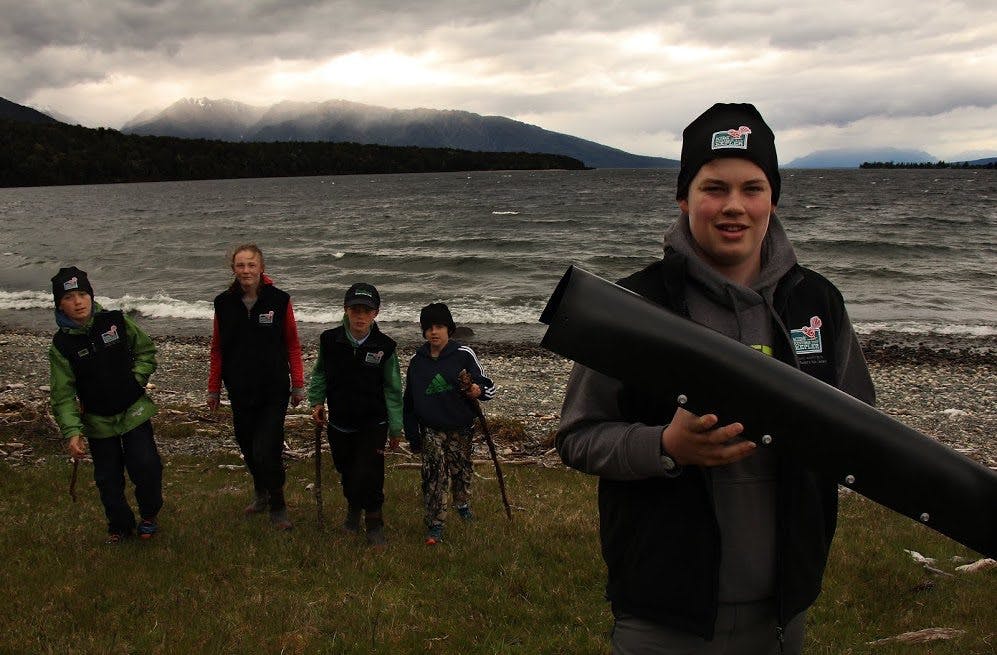 Fiordland Kindergarten runs an award-winning nature discovery programme which focuses on children learning and exploring in nature, discovering their special place in the environment. “If we want the best possible future for our children and our environment we need to give them the opportunity and time to connect with nature,” says headteacher Claire Maley-Shaw. “They need to love the earth before we can ask them to care for and protect it”.

Volunteer trappers and community groups are responsible for checking more than half the traps and existing trapping undertaken by the Kepler Challenge committee and their volunteers acts as a ring fence around the project. The local YHA offers free accommodation to students from the University of Otago helping with the cat research.

“This project is very much owned by the Fiordland community,” says Harry. She believes the Kepler project is an inspirational solution to the future of conservation and the model is now being adapted in other parts of the country, most recently to an urban setting in Taupo for Kids Greening Taupo.
“Involving children in authentic learning will make a difference for themselves, their communities and our environment, both now and into the future,” she says. “They are our conservationists of the future.”

Palmer loves being a teacher, but some kids can be hard work, she says. They are easily distracted, forever being disciplined or told what to do, as they struggle in the classroom environment. But get those same kids outdoors and doing conservation work and they are “awesome”, she says.
Planting and pest monitoring work at the Rotopito Wetlands caught their imagination. “Suddenly they become utterly trustworthy and show initiative. They never stop and are always asking what can they do next.

“They just love it. They’re so happy outside digging holes. They don’t just do it, they really care about it.”

Palmer believes many kids these days, even those who live on farms, are disconnected with the environment. The wetlands conservation work gets them mixing with, working alongside and talking to adults involved in conservation work, whether from the Department of Conservation or volunteers.

“[The kids] get to see that what they do is important to others, that a lot of people value the environment and people make their living working in the environment.

“For me, what’s important is that you switch kids onto caring for the environment, even if it’s just a few at least it’s a few that begin to care. They see they can actually do something about it.”

While the results of their work may not always be immediately apparent, kids can learn about benefiting the future. “They will be able to come back to this spot in 10 years’ time and say ‘I planted that tree’.”

Another organisation that actively encourages and inspires kids in conservation work is Forest and Bird. They have a dedicated Kiwi Conservation Club aimed at young people with a bright, informative website, a quarterly magazine and regular kids outings and adventures at local branches.

Kiwi Conservation Club manager Tiff Stewart says most branches have a conservation club coordinator, which is a volunteer role. “Some groups run real hands-on contributing to conservation activities, such as planting, monitoring, weeding or picking up rubbish. And some adventures are purely inspiring,” Stewart says.

The North Canterbury branch recently went on a camp where they went bat detecting with a monitor, went through Cave Stream and made damper over a fire. In south Canterbury they were counting poisonous spiders and the data collected about the native katipo was actually used by scientists.
Auckland branches got together for ‘stunning skinks and gorgeous geckos day’, where a lizard handler came in and the children were allowed to handle the reptiles. “They weren’t making a lizard home or anything, just being inspired.”

“I rarely run a trip that you won’t hear parents say ‘I didn’t know that’, so the whole family can make changes together,” Stewart says.

“I really enjoy working with kids and giving them the opportunity to experience being outside in the natural world, as well as getting to do fun things myself that you wouldn’t otherwise get an opportunity to do.”

Read has just finished a Bachelor of Science majoring in marine ecology and is now working towards a postgraduate primary teaching diploma. Her goal is to work as an educator in a zoo or botanical garden. Career choices that were inspired by her time in the conservation club, both as a kid and as a leader, she says.