There’s more to this Great Walk than meets the eye, discovers Sarah Bond

While living in Dunedin, my true north has become due south-west. Fiordland, with its Great Walks threaded across the wilderness seems magnetised in my world. I’ve been intrigued by the community in Te Anau and their sense of connection with the Kepler Track. Everyone I’ve met seems to be committed to working on wildlife projects or helping out with the Kepler Challenge trail run.

The Kepler Track is a true circuit and the start is within walking distance from Te Anau.

Ken Bradley, a Te Anau-based Department of Conservation ranger, began surveying the track in 1984. His bearded face lights up as he describes the project as “the highlight” of his career. “It was purpose built for tramping and we got to use hydraulic machinery like diggers and power carriers in the backcountry for the first time,” he recalls.

The track’s official opening in 1988 coincided with the 25th anniversary of Te Waihipounamu UNESCO World Heritage Area, and today more than 8000 people walk the track annually.

Standing at the Control Gates on the edge of Lake Te Anau, I had a vivid flashback to the 2011 Asics Kepler Challenge. Managed with military precision and the help of over 200 volunteers, the event had a true community feel. There was a small village of tents and Vajin Armstrong ran across the finish with Zen-like calm, completing the 60km run in 5 hours 1 minute, 54 seconds.

I caught up with Steve Norris, the Chairmen of the Race Committee and owner of Trips and Tramps Fiordland before I left Te Anau. He and his team are planning for the Asics Kepler Challenge 25th Anniversary celebrations this year. According to Norris, the hardest part of the Challenge is getting registered. In 2011, the 450 places were booked out in less than seven minutes. “I received my first irate phone call at 6.45am from a ‘would be’ competitor, in Germany, who had missed out,” Norris says.

From the Control Gates, I wander past Brod Bay (named after Captain Broderick who once ran boat tours and ferry supplies around the lake) and head uphill to Luxmore Hut. I always enjoy walking through tumble down beech forest. There is a real sense of space compared to the podocarp entanglement on the West Coast. 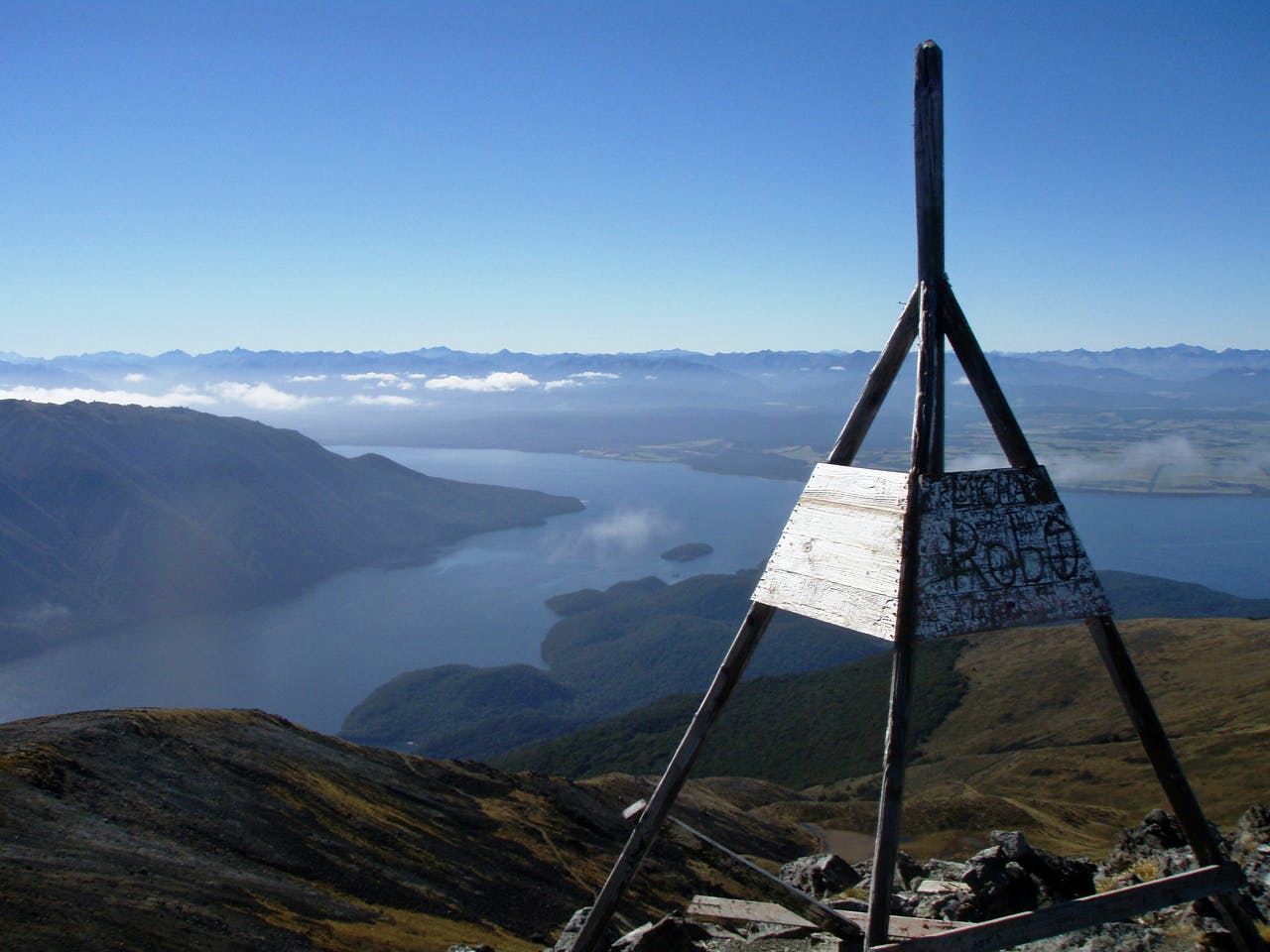 The first track up Mt Luxmore was cut by Jack Beer, an early run holder. He grazed sheep on the tops during the summer and swam across the Waiau River when he needed supplies. Hiking above the tree line, the first thing I notice is the curly tipped tussock – the hillside seems to have had a semi-permanent wave! Then the full frontal view of Lake Te Anau hits me, unquestionably a ‘grab your camera’ moment.

Luxmore Hut really is luxe, with its indoor flush toilets, lake views and palatial extension to the main kitchen (completed in 2011). Hut warden Fay Edwards greets me and after dumping my pack, I send a text message to Henriette Beikirch, the hut warden at Lake Angelus Hut in Nelson Lakes National Park. ‘I’ve found a ranger’s staff quarters with better views!’ I boast.

Edwards shows me Luxmore Caves the next morning. Somehow, limestone caverns are not what I expect to see on a Great Walk. As we peered at the formations hanging from the roof, I giggle as I remember a cave guide once telling me ‘mites climb up and tights come down’. We turn our torches off to be enveloped by the dark silence of the cave.

Heading towards the summit of Mt Luxmore, I have a mind-bending moment trying to imagine the mountain range I’m tramping deep beneath the sea. The ridgeline still holds seabed fossils and I also think about what it would be like to step out on glaciers, over two kilometres high. If I had been here over 18 million years ago, I might have found out.

The view from Mt Luxmore is phenomenal. Early Maori explorers called it O-te toroa and used the peak as a landmark when hunting for pounamu. Both the Kati-mamoe and Kai Tahu tribes spent time in the area. Kumara would not grow this far south, so they lived a transient lifestyle, hunting for seasonal food sources and precious greenstone.

Forest Burn Shelter is an ideal lunch spot and Picture Point Rock, just beyond the shelter, is Pania Dalley’s favourite viewpoint on the track. Dalley is the DOC visitor assets operations ranger, who along with other visitor assets staff helped with the hut extension at Luxmore Hut. Dalley was described in Gillian Orrell’s New Boots in New Zealand: Nine Great Walks, three islands and one tramping virgin as the hut warden who can mimic kiwi’s. ‘ She tips her head back, opens her throat and lets rip a piercing cry’. Apparently, Dalley is not quite busy enough, as she is also the volunteer/logistics co-ordinator for the Kepler Challenge.

Just before Hanging Valley, I meet Matt, an American from Virginia, and begin to have thoughts about natural selection. Matt is wearing jeans, a tee shirt and steel capped boots. The Kepler track may be a Great Walk, but it is not for the ill equipped. Fiordland’s ridgelines can be assaulted by blizzards even in summer so Matt is lucky the sun is out and he is not huddled beneath a rock in hypothermic misery. 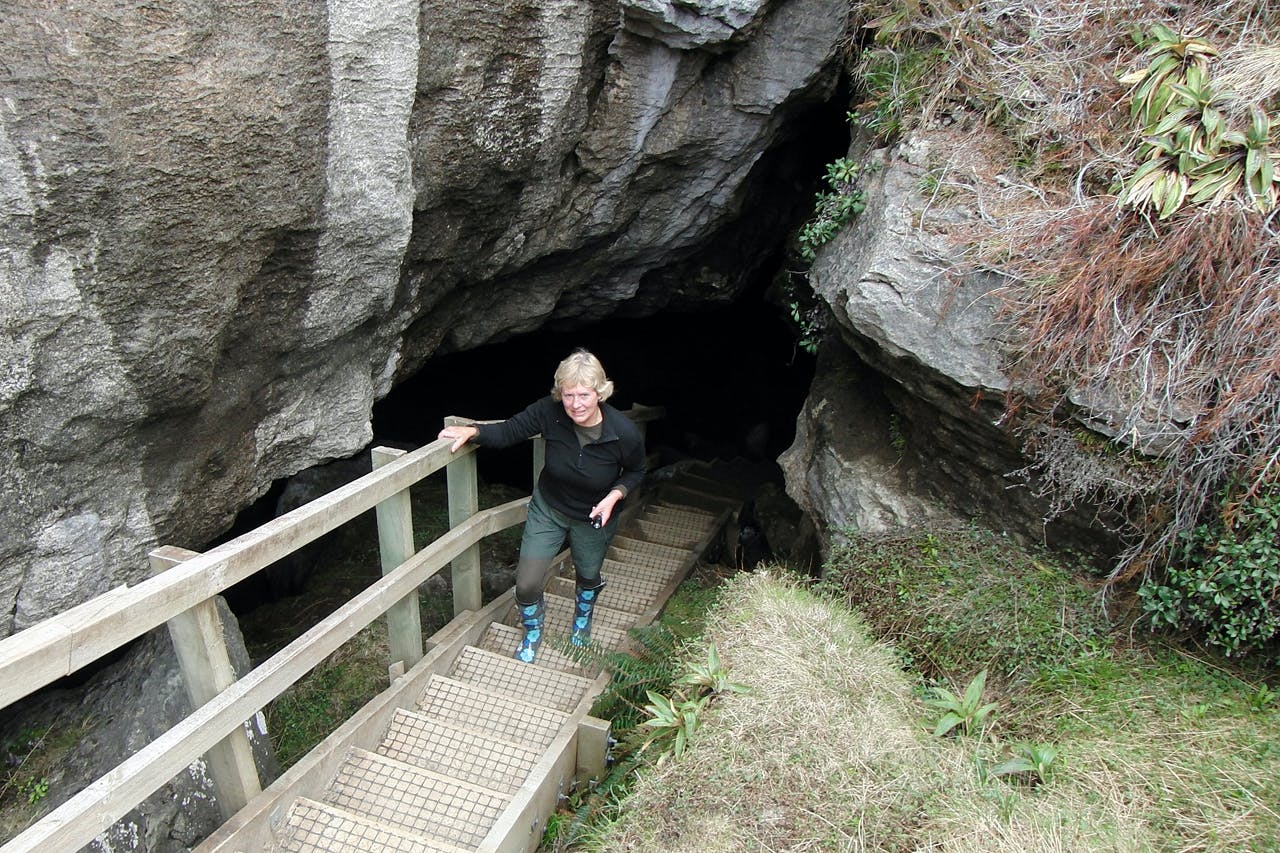 Hanging Valley Shelter marks the beginning of the downhill run to Iris Burn Hut. It is another beaut spot to enjoy the views and watch the keas dancing a tango on the toilet roof. The valley was once covered in hanging glaciers but now, instead of ice, waterfalls flow from carved rock faces.

Down in the valley, hut warden Marianne Widmer has everyone entranced during her introduction. She plays the calls of the male and female Fiordland brown kiwi and explains that, “kiwi’s are the only bird with nostrils at the end of its beak, and that they dig for grubs like a hedgehog. If you see a small hole about two inches deep, that’s not a kiwi, that’s a walking pole. Kiwi holes are 4-6 inches deep, wide at the top and narrow at the bottom.”

She suggests we walk towards Iris Burn falls at dusk to listen for kiwis and see glow-worms.

Kiwis are making a comeback in the area thanks to the Kepler Challenge Birdsong and Kids Restore New Zealand Projects. In 2006, the Kepler Challenge Committee decided to raise the race fees and set up a trapping programme. Steve Norris tells how he was out on a lake cruise and heard there was no trapping programme in the area. With the help of the Te Anau community, traps have been set up every 200m along the track below the bushline.

People genuinely are passionate about trapping. When I first met Norris, I overheard him talking about his ‘kill stat’s’. “Yup, I got four stoats and twelve rats today,” he boasted. Ray Willets, at the age of 75, is the eldest competitor in the Kepler Challenge, and he checks the traps from the Control Gates to Rainbow Reach every week. He has caught everything from feral cats to stoats, rats and weasels.

The Bird Song trap lines and the natural barriers created by Lakes Manapouri and Te Anau create a 10,500ha mainland island. Kids Restore New Zealand, which is part of the Air New Zealand Environment Trust, has donated $250,000 to set-up trap lines across 3000ha in the area. Rachel Cockburn, the Fiordland Conservation Trust’s manager discusses how Te Anau students from kindergarten through to Year 12 are helping with the ‘sanctuary’: “They’ve helped build the trust website and are learning the science of trapping as part of their school curriculum. The students got to meet Ruud Kleinpaste (The Bug Man) and a select group flew to Auckland to present their work to the Air NZ Environment Trust. A pretty amazing opportunity for our kids!”

Pete McMurtrie, DOC’s local biodiversity ranger, is in charge of the field operations for the Kids Restore New Zealand project. Tracks have been cut and the trapping will begin in March. “There are all sorts of things that the students will be involved in,” he explains. “They are going to help work out which bait is best, and learn about statistical modelling through the trapping results. The programme brings context to what they are learning about, and it’s not just kiwi’s that will benefit, there are short and long tailed bats in the area too.”

On my last day on the Kepler, a walk past the 1984 ‘Big Slip’ reminds me not to mess with Mother Nature, and Moturau Hut on the edge of Lake Manapouri is my lunch stop. Lake Manapouri, with its 33 islands, is New Zealand’s second deepest lake and I seriously wish I had an extra day to enjoy this peaceful spot.

Looking out over the Kettle Bogs on the way to the end of the track, I again wonder about the rivers of ice that sculpted the area. I finish my journey at the Rainbow Reach swingbridge, no ‘Kepler Shuffle’ for me, as I have to get back to town. With a camera full of photos and a book crammed with notes, I now officially understand that people are not the only things that run wild on the Kepler Track.