Bounded by the Rangitata and Rakaia rivers, Hakatere Conservation Park offers spectacular vistas for those prepared to summit the park’s peaks. Dave Mitchell climbs three of the best

One of the best ways to view the 60,000ha Hakatere Conservation Park is to leg it up one of the park’s prominent peaks.

The three peaks that immediately come to mind offer open tops and stunning vistas of the park and surrounding landform. They are big open summits you can wander around on and soak up the views, with plenty of options for alternative descents and return routes. They are also great to climb in winter when there’s a bit of snow around. This isn’t mountaineering stuff, just great tramping country with a bit of route finding thrown in and maybe crampons in the snow. 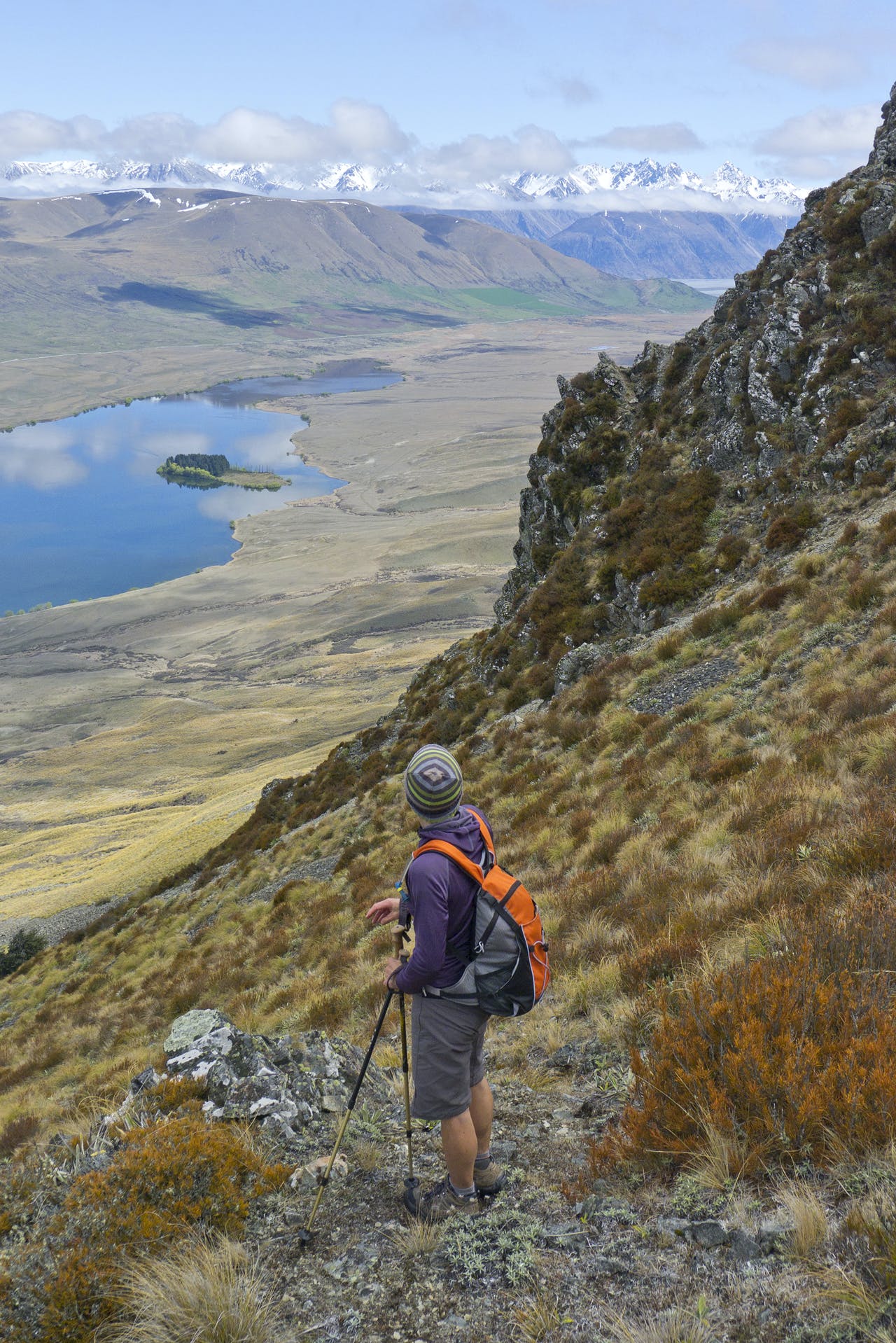 Mt Guy and its lower peak sit isolated at the southern end of the Dogs Range, lapping at the edge of Lake Clearwater.

From the Clearwater settlement, follow the track around the lake edge. Cross the footbridge over Lambles Stream at the east end of Lake Clearwater and follow the main 4WD track for a short distance west. A stile over the fence line, followed by orange-topped waratahs, marks the start of the poled route to the top.

This route climbs gradually through golden tussock, spaniard, matagouri and a variety of native shrubs. At the 900m mark, the route steepens and climbs up a ridge next to a stream gully, where its surface becomes rocky. It flattens out as you near the top for a short stroll to the summit.

The summit is especially good for its western views of the Two Thumb Range and the Southern Alps, not to mention great views of the surrounding lakes.

For the return, try rambling along the ridge top to the low summit and take the north-west ridge to a small tarn at the head of a stream valley and tributary of Paddle Hill Creek. The poled route drops steeply to the terraces below and south through a series of gullies back to Lake Clearwater. The lake edge track will take you back to your start point, but there are many other route options you can explore. All you need is a map and a bit of imagination. 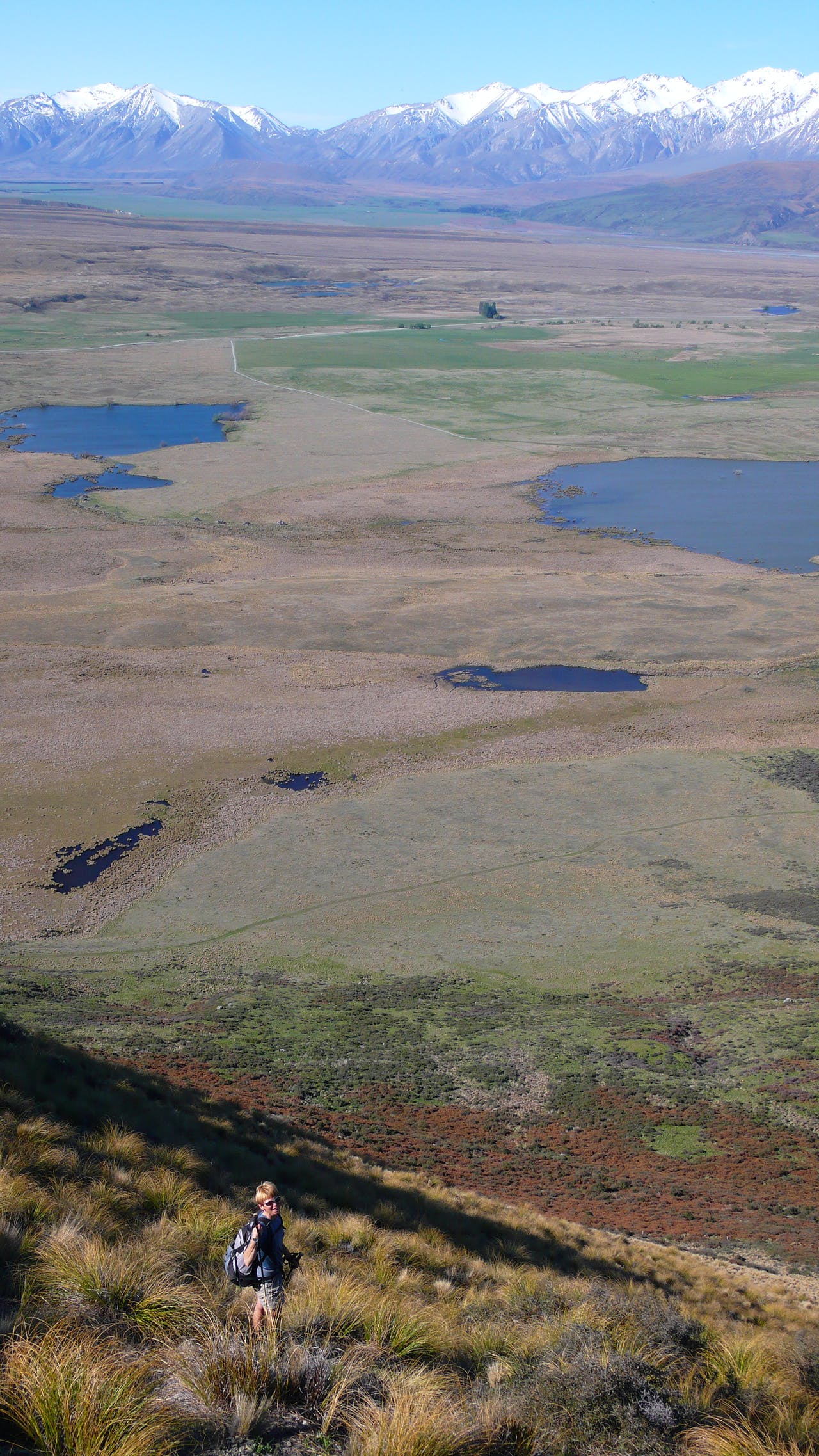 Like lumpy porridge, the Harper Range climbs steeply from the edge of Lake Emma to the summit of Mt Harper then plummets down to the Rangitata River flats. There is no poled route to follow on this big climb, but with open flanks, and ridges for Africa, your legs will be spoiled for choice.

My preferred route goes up the Balmacaan Stream Valley on an old 4WD track, south of Lake Camp. You can bike or walk this bit. Tramp up to Balmacaan Saddle and follow a U shaped route that crosses a couple of dumpy 1600m peaks before heading north to the top of Mt Harper.

You can wander south-east along the tops to Cairn Hill enjoying the views across the Rangitata River onto Mesopotamia Station and the Two Thumb, Ben McLeod and Hewson ranges. Descend any of the north and west ridges, the choice is yours, or head back the way you came. This is the highest of the three peaks and thus commands the most expansive views. 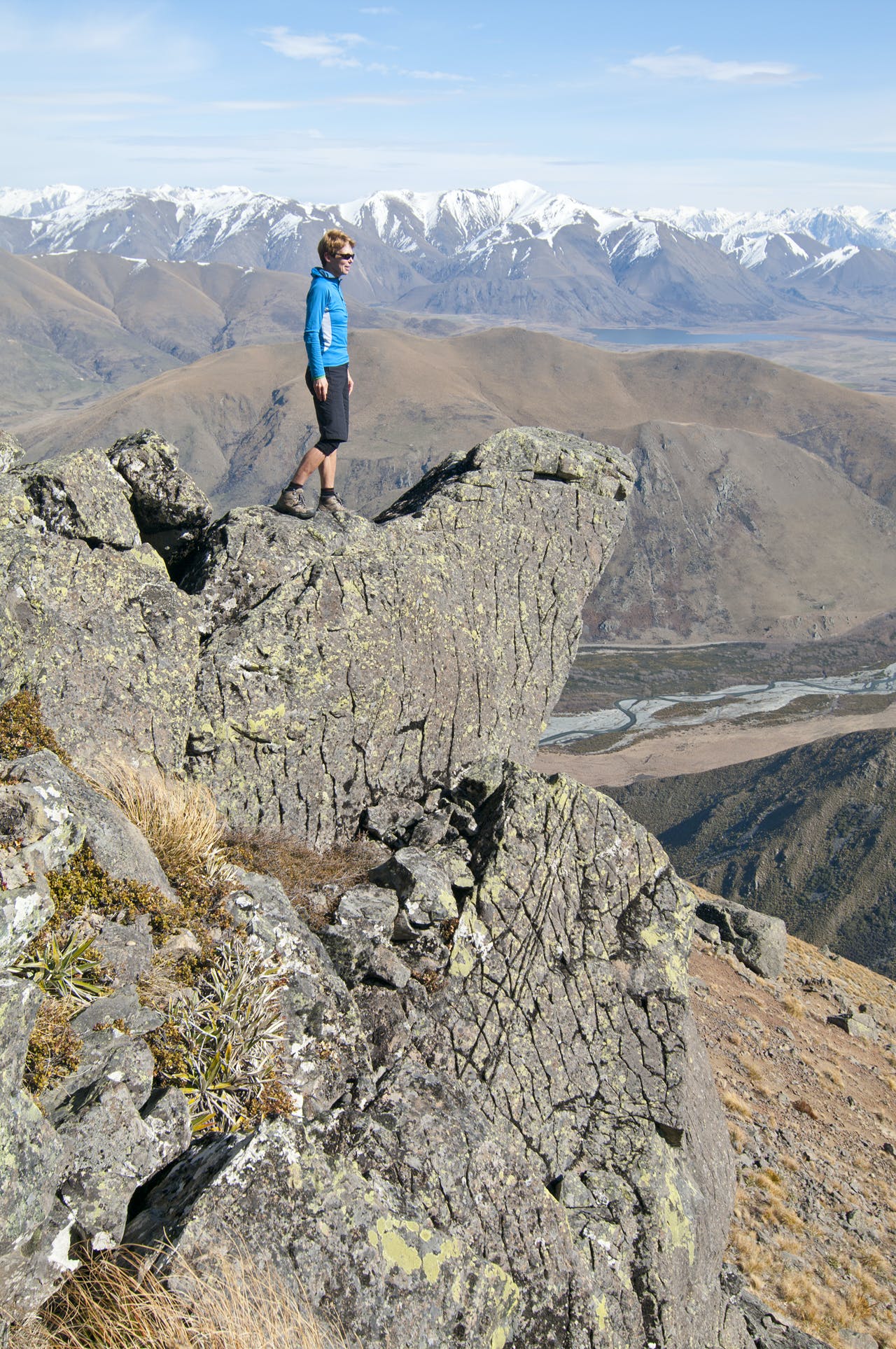 Mt Barrosa and the Clent Hills along with the Stour River Valley are an addition to Hakatere Conservation Park thanks to a recent tenure review settlement.

The easement through the freehold part of the property is marked from a small car park on the Ashburton Gorge Road, just east of Blowing Point Bridge.

A poled route climbs beside a stream surrounded with broadleaf and kowhai trees then heads up a farm 4WD track to the boundary of the conservation land. Cross the stile and go steeply up the adjacent fence line into cotton daisy and tussock country.

This south-facing route can be quite slippery in the winter when it sees little sunlight. Continue east across a low peak at 1016m before dropping a short way down to a saddle. The final climb heads past a series of rocky outcrops north up the ridge to the summit. Mt Barrosa is soon reached and beyond it the open flat tops of the Clent Hills continues for miles.

This area has similar geology to Mt Somers and is a popular place to pick up interesting rocks and crystals. I have found some spectacular, house-sized boulders to have a sheltered lunch beneath at the south-west corner of the peak.

From the summit, an old fence line wanders vaguely north along the tops providing plenty of options to drop down the Clint Hills’ many ridges into the Stour River Valley or ultimately travel all the way to Lake Emily. Stunning views of the Arrowsmiths, Mt Somers, Mt Hutt, Lake Heron and virtually the whole Hakatere Conservation Park will follow you most of the way.