The risk of foregoing a guaranteed climb by seeking out new routes can be rewarded with the founding of a classic.

What’s better: to seek out the vague possibilities of new tramping and climbing areas or stick to the reliability of the tried and true? Whatever the choice of activity, this conundrum dictates the kind of trip we undertake, as well as the likelihood of having a good time. Or does it?

Routes become classic for a reason. Over time, and through the weight of increasing opinion as more people are attracted to them, the classics become recognised. Through reliability and quality, they offer an experience likely to satisfy. And given our usually restricted opportunity to get outdoors due to weather frailties, or the limits of squeezing a trip in to a weekend, this is important. After all, we seek out these adventures for the experience of them.

This is especially the case with climbing alpine routes. The classics are recognised for having solid rock, or for the ice being in condition more often than not. The access might be easy, and descent easier still. All of these factors add up to the overall quality of the experience. Most of us, most of the time, want our climbing to be appropriately challenging – but fun! A climb with dodgy rock or risky access, or that hardly ever forms up with ice, is not likely to see much traffic.

My various climbing partners have differing views on this. Some like to go for quality only, and focus their attention on whatever will give them the most time actually climbing. Others are more interested in technical difficulty, regardless of whether the route is new or a repeat. And others like the exploratory side of trying to find new terrain to climb, hopefully uncovering something that could, one day, be considered a classic.

I guess I hedge my bets. I like returning to a familiar area as I understand potential access issues, rock strata, localised weather and anything else that could affect the trip. But then I get a kick out of ferreting something new or different within that area. Maybe I’ll bush bash into a side valley that I haven’t been to before, or head round to the far side of a particular mountain just to see what’s there. 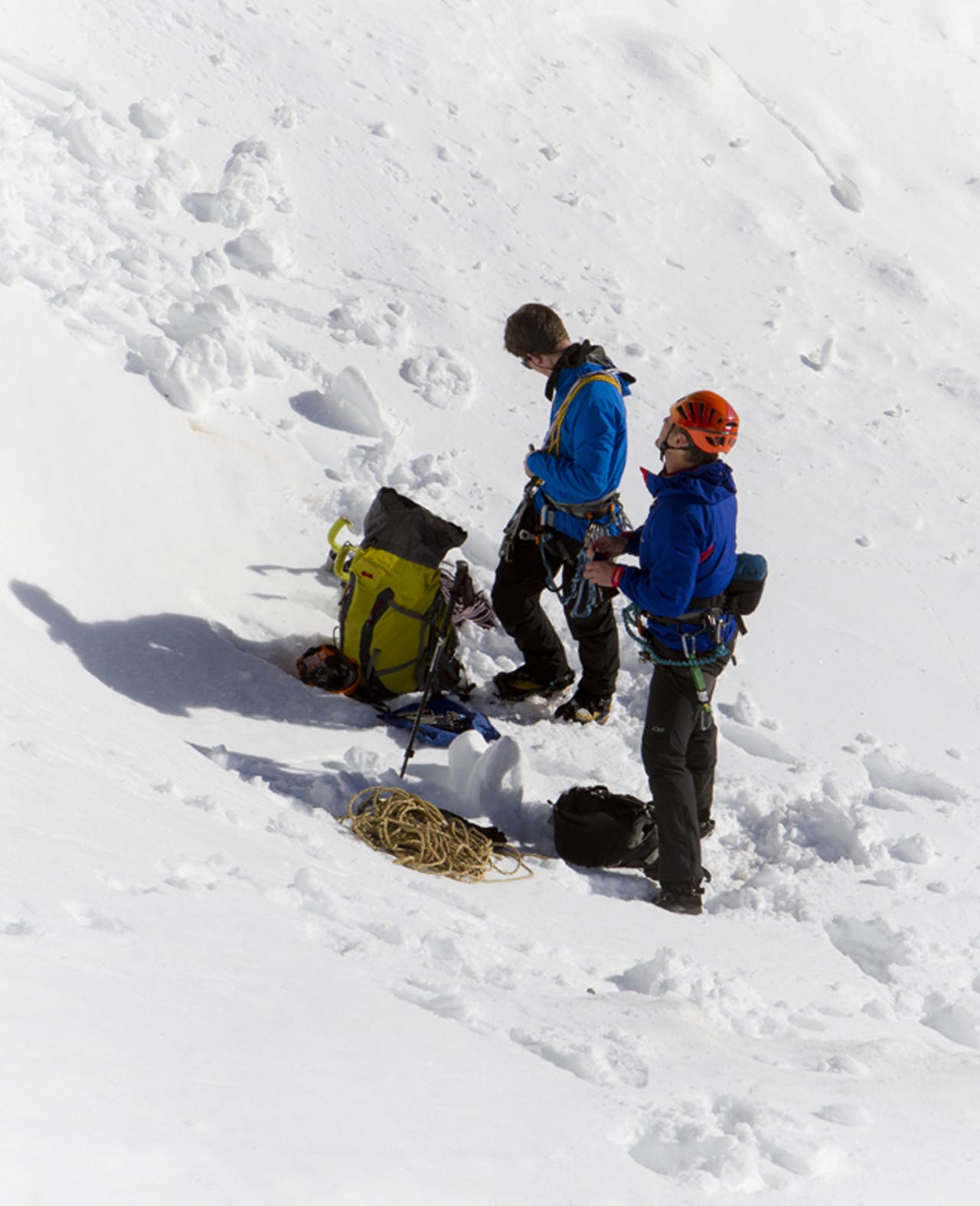 Jamie Vinton-Boot and Paul Hersey gear up at the base of Honey Badger. Photo: Paul Hersey

More often than not I strike out and end up taking my climbing gear for another walk. If I’d stuck to a route I knew, or that had been done before, I would have gone climbing rather than walking.

But occasionally I manage to eke something out that makes the whole sapping process worthwhile. Once in a while, I find a line that ticks all the boxes. And then, finally, it all begins to make sense.

Ice climbing in winter is particularly susceptible to this conundrum. Water ice in New Zealand can be a fickle, elusive beast at the best of times. One day it’s there; the next it’s packed its bags and headed back to Canada. For the most part, and contrary to popular belief, our land just doesn’t get cold enough for long enough.

There are a few semi-reliable areas, like Wye Creek on the back side of the Remarkable Range and Bush Stream in the Ohaus. But fine weekends at Wye Creek, in particular, can resemble Queen Street at lunchtime. Sometimes there are even queues for routes. I like my climbing a little less congested.

And so I have kept searching. And, this last winter, I struck pay dirt with an easily accessible four pitch water ice route in the Hopkins Valley. It had been in front of me the whole time – I just had to know where to look. Perfect! Unfortunately, the finding and the climbing of the thing proved entirely different.

The first attempt ended at the top of the first pitch. It was late in the afternoon when we started climbing, and Graham, Shelley and I had another day up our sleeves. Rather than finishing the route in darkness, we decided to head back down to the nearest hut and return the following morning.

The next day we got as far as the top of the second pitch. This time a chunk of the upper tier broke off and bombarded us with ice blocks. We descended again, this time heading off to Timaru Hospital. Broken bones, bad bruising, concussion and three totalled helmets put paid to any further action.

Three weeks later I returned, with different climbing partners this time. Shelley would have tried again, but was busy with work. Kester and Ruben questioned me on the safety of the route. I shrugged my shoulders, figuring the falling ice was just ‘one of those things’ rather than a particularly bad risk. 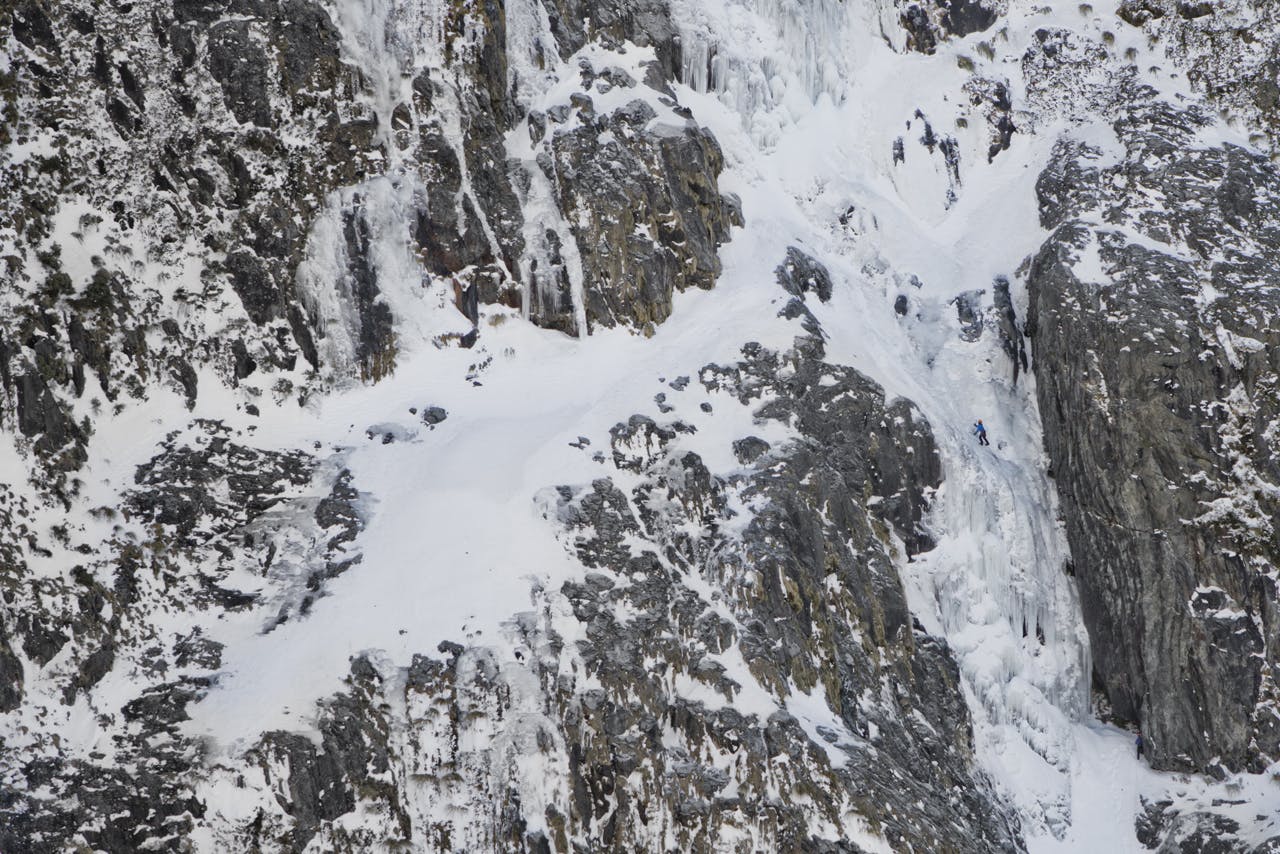 By the time we had walked up to the ice line, we realised the whole thing had fallen off! Three weeks of unseasonably warm weather had taken its toll. We ended up climbing another route to the left that was still formed but slowly disintegrating.

And then ‘that storm’ hit – the one that covered much of the country in snow. A 50 year event, the meteorologists called it. Ice climbers referred to it as a godsend. Temperatures plummeted. Feeder slopes choked with new snow. We hunkered down to wait out the storm, hoping we could actually get out of Christchurch once the storm eventually passed over.

The weekend arrived, and Jamie, Troy and I tentatively followed the main highway south. Road workers had been busy, and the roads were mostly clear. Eventually we reached the Hopkins Valley. Surprisingly, there was less snow in the valley than around my coastal house in Christchurch. But at least the temperature was cold. We camped under a starry sky, dreaming of frozen waterfalls and sweet ice axe placements.

It must be said that the route – which we named ‘Honey Badger’ – was not in classic condition. At times our ice axes or crampons punched through the thin veneer of ice, and the waterfall beneath would gush out. Pitch after gentle pitch, we eased our way up the creaking ice, breathing a collective sigh of relief upon reaching the top. The following day, two other Christchurch climbers who had heard about my previous attempts turned up and made the second ascent. Kester and Steve found conditions even more testing than we had.

But we all agreed that, given normal early winter conditions, ‘Honey Badger’ had the potential to become a classic. I was stoked, and somewhat relieved, to finally get up it. Another footnote could be added to my understanding, and enjoyment, of the Hopkins area. Already I was looking at different mountain faces, wondering what was tucked within hidden drainage lines. I couldn’t wait to get back and try to discover something else.