Robert Mads Anderson has just written one of the best books ever published about climbing Everest. Roger Foley interviewed the Kiwi-American climber about it.

I recently read one of the best books on Everest and climbing. It’s called Nine Lives by Robert Mads Anderson and in it, Anderson writes with a rare innocence about his early failures on Everest, his nine attempts to reach the top, why he likes solo climbing, why he became obsessed with Everest and why he eventually used supplementary oxygen, took up high guiding and his friendship with New Zealand’s first family of alpinism.

But who is this guy?

Anderson arrived in New Zealand in 1983 on a bicycle tour around the world. At 25, he was already an accomplished rock climber from Boulder, Colorado, having climbed such notables as El Capitan, Half Dome, Washington Column and a solo on the Matterhorn in winter, to name just a few.

In New Zealand, he worked for the top ad agency Ogilvy and quickly learnt that the key to weekend climbing was to schedule client meetings in Christchurch on Fridays.

Routes rather than summits were more important, though he did manage Aoraki prior to its top falling off, as well as good routes on Malte Brun and a long slog up Ellie de Beaumont.

His love affair with Everest began with an attempt on the West Ridge in 1985 when he and Jay Smith reached 8600m. Three years later, he and a small team climbed the desperately steep Kangshung Face to raise the bar on Everest high climbing.

Reinhold Messner said at the time that “you have done a very hard thing, but you were lucky”.

Why do it and why Everest?

It’s all in the book Nine Lives, beginning with a youthful view of the world, graduating 18 years later to a person accepting the use of oxygen at height, and surprisingly, guiding clients to Everest, and beyond. 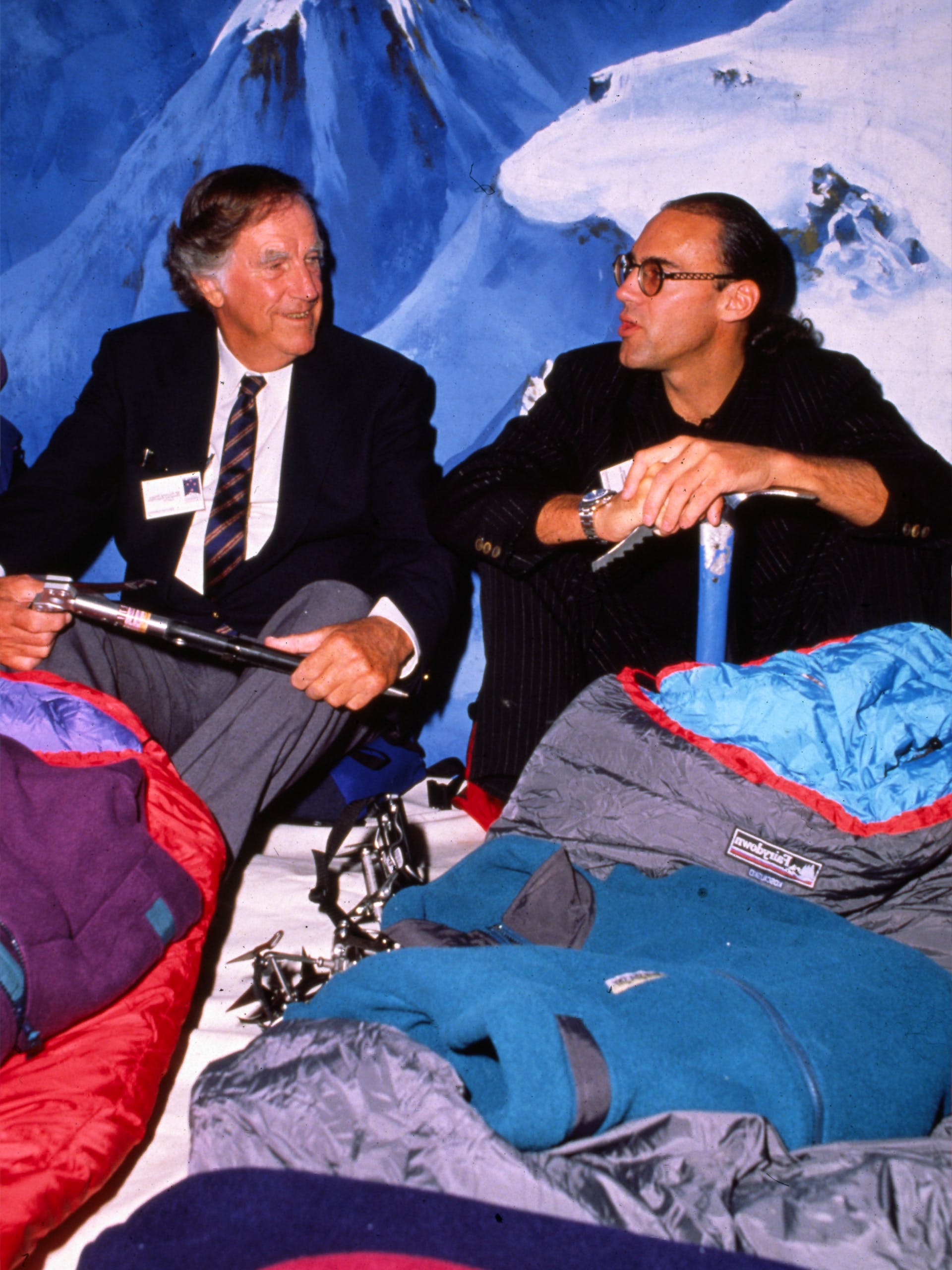 Everest has a myriad of faces, according to Anderson, offering far different cultural experiences, routes with rock, ice and some very challenging climbing. People read about the trash, crowds and bodies, but in reality, that is on two routes for two months of the year, and up high, for about two weeks.

That leaves 20 or so other routes and 10 months when Everest is pretty much empty and the opportunity for new routes, out of season routes and new climbs is substantial.

Even on the trade route over the South Col, the threat of death is never far off, despite modern technology. Anderson’s description of his descent with a blinded client from near the summit and the 4km drop-off down the Kangshung Face is riveting.

The description of the blood trail in the icefall from a body bag is sobering. As is the helicopter crash that took two lives.

Anderson has a global perspective. He currently lives in Dubai where his mountain guide wife and foreign language tutor works. Their two children are based in New Zealand and are currently in Fiordland with Peter Hillary’s kids. Anderson’s brother in law, Tom Clark, lives with his family on Banks Peninsula.

Anderson has had an association with the Hillary family dating back to when Sir Ed gave Anderson advice prior to his first Everest attempt in 1985. “A friend at Ogilvy said I should call Ed and that I would find his number in the phone book, which it was, along with his address. Once I got over the initial awe of meeting him and having tea at his very Himalayan-influenced Auckland home, I realised that he was indeed a real climber, very easy to talk to one-on-one and we ended up talking for several hours.”

Where to now for Anderson? Like most people, he is in hibernation but hoping to guide another Everest expedition in 2021 and in the post-monsoon season lead a long trek in the Upper Dolpo in Nepal.

Anderson says winter offers endless possibilities for high climbers and new gear and training will allow climbers to go higher and faster and come back down again between winter winds and storms. There is new route potential on the Kangshung Face in the wind shadow, and one walk up the Baltoro in Pakistan is all it will take to see the acres of unclimbed possibilities there.

The question hangs in the air: has he used up his nine lives?

Buy Nine Lives from the Wilderness store. Subscribers get a 10% discount