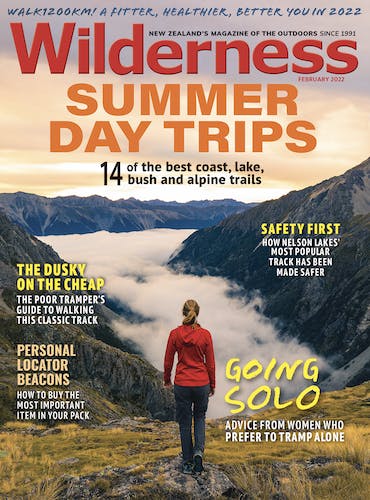 When Katy Glenie was diagnosed with multiple sclerosis she thought she’d never go tramping again. Then she climbed a 3000m mountain. She spoke to George Driver about the life-changing feat

It started with a sensation, like pins and needles, down her right side. Then weakness, vision problems and difficulty breathing. By the time Katy Glenie had an MRI scan and was finally diagnosed with multiple sclerosis two years ago, she says it was actually a relief.

“I knew something was seriously wrong and this finally gave me a name and something to focus my attention on,” Glenie says.

But then she felt her world begin to shrink. A keen tramper, climber and mountaineer, she says being outdoors and physically active was “pretty much the soul of my life”. Once diagnosed, she began to prepare for life without that ‘soul’.

“I thought it would be the end of my outdoor life,” she says. “I thought I wouldn’t be able to go on a tramp, carry a pack or spend long periods of time doing physical activity. The worst case scenario, I thought I’d end up in a wheelchair.”

MS occurs when the immune system attacks the protective sheath around the spine’s nerve fibres, potentially causing permanent damage. Symptoms vary but include weakness in the limbs, a lack of coordination, partial loss of vision, slurred speech and fatigue. It can be intermittent and some people experience long periods of remission. Others are confined to a wheelchair.

After doing some research, Glenie discovered that keeping active could help and perhaps alleviate her symptoms. Getting back into the outdoors could be part of her treatment.

“That was hugely encouraging because basically, it was the medical profession telling me to get outside and get doing stuff,” she says.

Then Glenie learned of Nick Allen, a Kiwi who climbed two Himalayan peaks after being diagnosed with MS in his mid-20s.

“That was a huge turning point,” she says. “To have someone showing me that climbing a mountain is still possible and who believes in the power of getting into the outdoors to change your life. I thought, ‘this is perfect’.”

After climbing in Nepal, Allen started the Mastering Mountains trust six years ago to encourage and fund people with MS to take on outdoor challenges. Glenie resolved to apply for a grant. But then she was diagnosed with breast cancer.

Fortunately, after a successful mastectomy, she recovered and last year was awarded a grant to climb the Minarets, a 3040m peak rising above the Tasman and Franz Josef glaciers – a challenging climb for someone in peak health.

She spent a year training, working with a neuro physio on a strengthening programme and building up to monthly overnight tramps.

“I was like, ‘I can’t even do a half-day walk’. And my physio said, ‘well, we’ll just start small and work up to it’. And that’s what I did – short walks without a pack, then longer day walks, then an overnight walk without carrying much, then an overnighter with a full pack.”

The first real test, however, was a trip to The Remarkables to attend an alpine course. Due to bad weather, Glenie had to climb Single Cone with little time to prepare.

“I thought it would be a good way to get back into the snow to refresh my skills, it won’t be too strenuous. But the night before, the guide said the best weather day is tomorrow, so we’ll climb then.

“I didn’t think I could do it. But he said, ‘we’ll just take it bit by bit’. That day we summited and that feeling was incredible. It was this opening up of opportunity and what my world might be able to be like in future.”

Three months later, Glenie was in a helicopter, flying to Centennial Hut, 2400m up the Southern Alps near the head of Franz Josef Glacier, to climb the Minarets with her mountaineer husband Mike. They waited three days for decent weather before attempting the climb. “As we walked towards the mountain face, I felt this bubbling of excitement and I started to let that come through me,” Glenie says.

What was expected to be the most challenging section turned out to be relatively easy, but ice on the summit face proved far more difficult than expected and instead of taking half an hour, involved two hours of white-knuckle climbing.

“My crampons weren’t giving me any purchase at all, so I was sliding and it was terrifying,” Glenie recalls. “I was absolutely determined we were going to get there, but I was not at my comfort level at all. Mike got some interesting language on that section of the climb.”

Once off the face, Glenie realised they had made it. “I couldn’t believe it. In this new body of mine, this was absolutely the most amazing thing I’ve ever experienced.”

She says the support of the Mastering Mountains trust has helped change her view of what’s possible in her life.

“I feel incredibly grateful for the opportunity and the support of all of the people that got me there,” says Glenie. “You don’t do these things alone. You do these things on the shoulders of so many people helping you. To know that you’re not alone is a very powerful thing in itself, and to know you can achieve great things drawing on the strength of others is incredible.

“This world that I love to be part of is still there for me and hopefully others hearing my story will find the strength they need. It’s changed my life.”

Nick Allen joined the Glenies on the helicopter ride to Centennial Hut and tracked her progress from Fox township. He says seeing her accomplish the climb was a huge inspiration for him.

“I feel like I’m the lucky one,” Allen says. “It’s just a privilege to see what she’s been able to achieve.”

In the past six years, Mastering Mountains has been able to help nine people with MS achieve an outdoor feat.

Nick is now experiencing an increase in the severity of his symptoms and last year he was re-diagnosed as having functional neurological disorder – a disease with similar symptoms to MS but with a different cause.

“During last year’s lockdown I ran a half marathon around the house and it was fine, but not long after that my health began to change quite suddenly and I started having vision problems. My balance has also gone so I started using crutches and walking poles, and I’ve had really high levels of pain which has been debilitating.”

The relapse of symptoms made him reassess how he approaches goal-setting and he’s learning to be easier on himself. Achievement doesn’t always need to be measured by reaching mountain summits.

“Sometimes I push myself too hard and that actually makes everything worse,” he says. “I had a lot of goals for 2021 – a whole bunch of climbing which I didn’t do. So learning not to be frustrated with that has required a lot of learning.

“There’s a tricky balance of setting goals that captivate you and propel you forward and excite you, but at the same time, if things do flare up, ensuring you don’t push yourself into the ground. I definitely haven’t mastered that balance yet.

“But today I went for a walk in the Port Hills and just focused on being present, rather than thinking ‘I wish I could walk all the way to the top of the hill’. I could just enjoy taking the time to admire all of the beauty around me and that’s been really helpful.