Mention ‘private walks’ and my mind conjures up images of gourmet food, hot spas and, perhaps, monotonous, modified front country which poses no real challenge to veteran lovers of The Hills. No longer tramping, these walks are for the elderly, or unfit urban-dwellers with disposable incomes and a penchant for paying someone else for a pre-packaged tour. Hardly an adventure.

Nothing could be further from the truth. While attempting to dispel this myth, my prejudiced mind was changed forever. With three cheerful companions from my tramping club, I embarked on a self-guided quest in Marlborough’s Awatere Valley.

A relative newcomer to the plethora of private walks in New Zealand, the Awatere Tussock Track was opened for business in 2007 by Simon Harvey. At the tender age of four, he moved here with his parents and has developed a contagious affection for the 1926ha of steep hill country at Glen Orkney. While Simon manages 5000 merinos and 250 Angus cattle, his wife Lynda deals with track bookings and marketing.

Leaving behind the rows of vines and wineries of the lower Awatere, we arrived at the road-end late in the afternoon. Simon and Lynda were both present to give us a warm welcome. After we’d settled into The Cottage for the evening, they returned to give us a safety briefing. We made the most of their rural hospitality, asking questions and delving into the history of Glen Orkney, which was named a century ago by farmers from the Orkney Islands. Simon explained that half of the merino wool shorn from his sheep ends up in Icebreaker clothing.

Next morning, we woke to the barking of dogs. After a hot shower and hot breakfast, we donned day packs and made a sluggish start strolling along the road. ‘This is easy,’ I muttered under my breath. Alas, a line of round posts, painted white, marched up a grassy farm trail, leading us off the beaten track. We soon found ourselves sweating up a steep spur, throwing off excess clothing and gulping down cold drinks. This is no walk in the proverbial park, I realised.

The rude awakening saw us follow more marker posts, ever upward, avoiding the obvious cuttings of a bulldozed road on the hillside above. We trudged through rolling tussock on a bearing due south, over saddles, sidling ridges of golden grass, chasing rabbits, scaring hawks and herding frightened flocks of woolly sheep.

Eventually, a lonely 4WD track snaked up a secluded gully, past an iron dunny, to top out at the lunch shelter; minimalist in design but sufficient to provide much-needed shade. My mate Bob is a generous gentleman, and breaks out the Bundabergs; one for each of us! We quietly sipped the ginger beer, drinking in the breathtaking vista beneath our feet; an endless Grahame Sydney canvas. 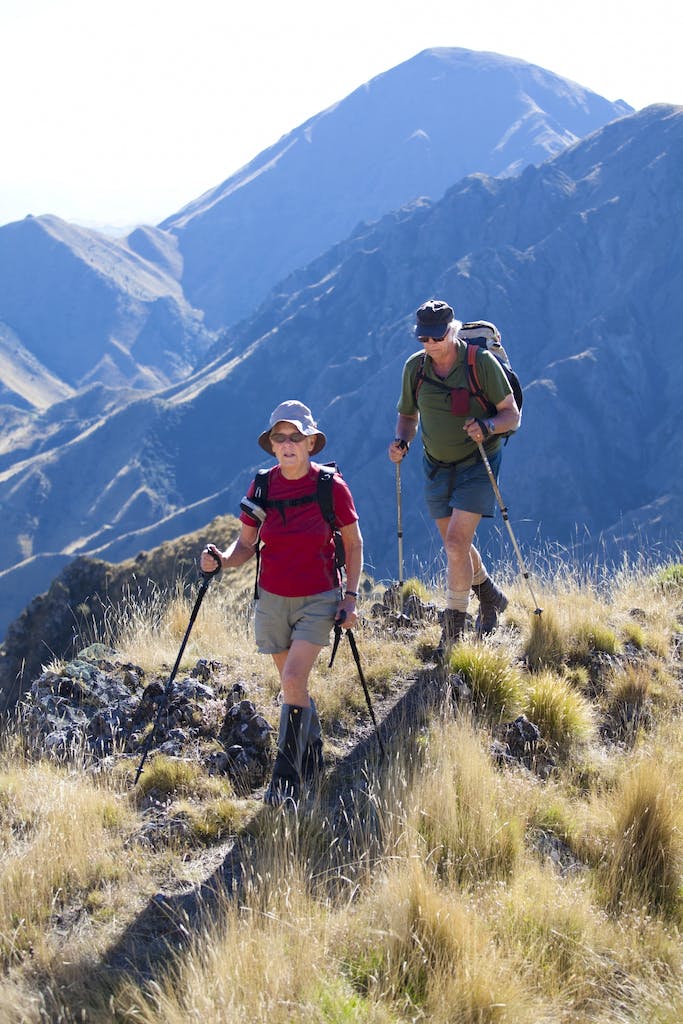 A short detour over a hillock gave us our first glimpse of Tapuae-o-Uenuku, the 2885m giant which Hillary made famous. It looked tame, naked even, devoid of its usual snowy coat.
Dropping down a 4WD road into the headwaters of a creek, the sun raked over the scorched earth like a searchlight. We were fugitives, hiding from the heat in a scrap of regenerating bush where the Harveys have thoughtfully placed a bench. Bellbirds serenaded us while fantails frolicked overhead. We were grateful for the opportunity to rest, as we braced ourselves for the final uphill slog.

A farm road cuts through rugged ridges of bleached tussock, diving in and out of narrow gullies, meandering onward until we reached Cregan Hut at 650m. Our chilly bin and packs had been ‘miraculously’ deposited here by unseen hands.

We were mightily impressed with our evening’s accommodation. Our hosts didn’t cut any corners in constructing a first-class luxury lodge in a sun-drenched basin at the back of their property. Cregan Hut is the crème-de-la-crème of tramper’s huts, sporting a barbecue area, north-facing balcony, twin bunkrooms and a fully equipped kitchen. Solar power provides electric lights and heating while gas cylinders provide hot showers and cooking. Sandwiched by toetoe groves, the cabin was built from macrocarpa and gum trees milled on-site; the rough-hewn timber contrasted with a minimalist, modern aesthetic. Lynda had added her own personal touches, such as a handwritten note to accompany her home baking. There was locally-produced wine in the fridge, and tasteful wall hangings. Not to mention a well-stocked library of tramping guidebooks, local histories, tributes to Kiwiana, and Dr Seuss stories.

We were full of praise, as we indulged in the decadence of hot showers and cold beer. Gazing out the window at a postcard-perfect panorama of blue and gold, we delighted in this oasis of tranquillity where the solitary sound is the buzz of a bee.

After dark, I set up my camera on a tripod to face the southern celestial pole. I programmed an intervalometer to make long exposures of the stars circling over the hut before retreating to the comfort of a soft pillow and down bag.

Dawn heralded another perfect day in paradise as we sipped coffee and prepared for the adventure ahead. It was a tough, uphill grind, hauling leaden legs up relentlessly steep tussock slopes towards our distant objective: the 1203m Twin Peaks. Cabbage trees punctuated the terrain, the Marlborough rock daisy, along with the odd snow totara. Dew dissipated quickly so our boots got dusty and our throats became thirsty. We peered upwards, searching for the next marker post which leads us along little ledges, up rocky staircases, weaving a precipitous path through towering bluffs to a signpost.

We were at the track’s highest point, clicking off frames, my camera getting shutter fatigue. Timidly, we stepped over the edge, across shingle slopes, sliding down scree toward Billy Goat Saddle.

Above us loomed the shattered face of Mt Malvern, climbable, but not on today’s agenda. The morning had morphed into midday when we sneaked along the eroded northern slopes of the mountain, our nerves tested on unstable scree. Trekking poles aided our balance, and we kicked the sides of our boots into shingle for tenuous footholds.

Dancing through a minefield of cowpats, we discovered Top Hut, erected in 1980 for hunters. We dived inside to enjoy the rustic atmosphere. A large teapot was boiled and we eagerly sampled the tin of toffees that Lynda left there. It is a pleasure to imbibe the rare beauty of unbroken quiet.

There was yet more tussock to traverse; this time a sidle under the shadowy walls of Big Cregan, through a pocket of podocarp, to complete the circuit to Cregan Hut. Back at our base, we agreed that the day’s excursion should be rated as a ‘marked route’ for fit and experienced trampers.

Our third and final day saw us reluctantly depart ‘our’ hut, squinting into the sunshine as it broke out above Big Hill, firing the tussock into golden glory. A two-stand shearing shed was explored, then we arrived at an antiquated musterer’s hut for morning tea. Inside the shanty are artefacts from a bygone era; the place reeked of human history. 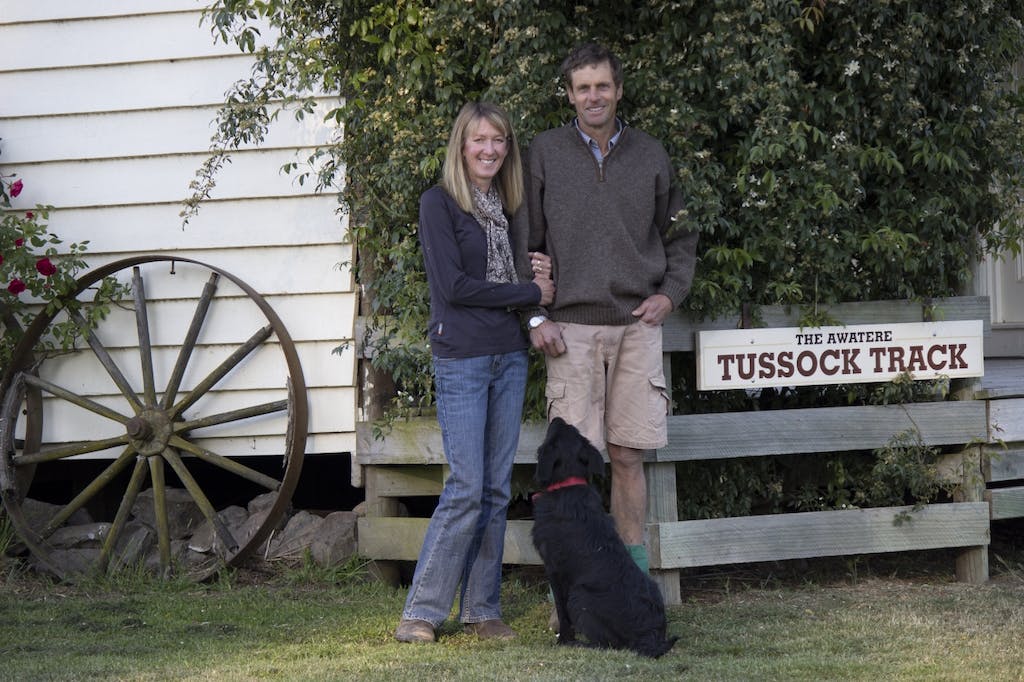 From here we were presented with two options. We resisted the temptation to return directly over farm roads and instead hop over a lethargic creek. Ducking into a gully of second-growth natives, we marvelled how the bush here has survived the ravages of fire and felling which devastated much of Marlborough’s original forest cover. The landowners have protected this valley with a QE2 covenant – the abundant birdsong is testament to their wisdom.

My friends revelled in the identification of native plants that are endemic to this region. This is truly a botanist’s paradise.

Grunting up onto the tussock tops, we sidled along sheep trails for an age, before reaching a corrugated iron shelter for a bite of lunch. Farm tracks led us back to the homestead where the hospitable Harveys were waiting for us.

We heartily recommend the Tussock Track to any battle-hardened tramper or seasoned adventurer who isn’t too proud to relinquish their heavy swag for a light day-pack; to swap dehydrated food for a chilly bin of fresh food; to trade boring beech forest for open tussocky tops; to be a pampered tramper, if only for three blissful days of living the high life.