A 40km walk over three backcountry sheep stations gives Ray Salisbury a new, and relaxed, view of the Kaikoura ranges

If you want remote wilderness, go to Stewart Island. If you want a challenging alpine traverse, head for the Southern Alps. If you want fiery volcanoes, go to Tongariro. But if you want a relaxed escapade with great food and great company, book three days on New Zealand’s second oldest private walk.

The Kaikoura Coast Track (KCT) has now come of age, since thousands of happy hikers have walked the 40km circuit for the last 20 years. Most of them are Kiwis, with foreign walkers making up about a quarter of the clientele. This trail is particularly popular with groups of women and with folks in early retirement.

Over the years, less profitable farms have been forced to diversify, looking for alternative ways to make money. In 1994, a bunch of Cantabrian cockies decided to open their land to the public. After six months of hard slog, linking farm tracks, building shelters, erecting signs and upgrading old cottages, the KCT was born. The track traverses three backcountry sheep stations: Ngaroma, Medina and Hawkswood. By 2006, it had earned the Green Globe award for sustainable tourism.

In mid-March, my wife Lynette and I were invited to experience this rural adventure for ourselves. We jumped at the chance, made the bookings, and drove down the rugged coastline to Kaikoura and over the winding Hundalees (which the locals call the Chunda-lees), making our way to Conway River flats.

We arrive on a Thursday evening and snuggle into the comfy lounge of Ngaroma Loft. We meet our walking companions, ex-teachers like ourselves. Canadians Nadia and Mike fell in love with New Zealand years ago; this is their sixth visit. Our hostess is Heather Macfarlane, who pops over to welcome her four guests.

Friday morning finds me on the beach shooting the sun as it climbs over the Pacific. Sometimes there are fur seals and Hector’s dolphins on this stretch of coast. Today it is empty, except for half a dozen wave-washed stumps of 8000-year old trees, sunken into the sand like ancient sculptures.

Later, Bruce Macfarlane drives us along farm roads to avoid the unusually high tide which has blocked our progress along the shoreline. Gigantic waves smash into the line of cliffs, so we are glad to be bouncing in the back of the farmer’s ute. We disembark, wave goodbye and head to a small river mouth. Hidden in the jungle nearby, Circle Shelter is a rustic whare; its triangular arch emulates the original Maori campsite here. 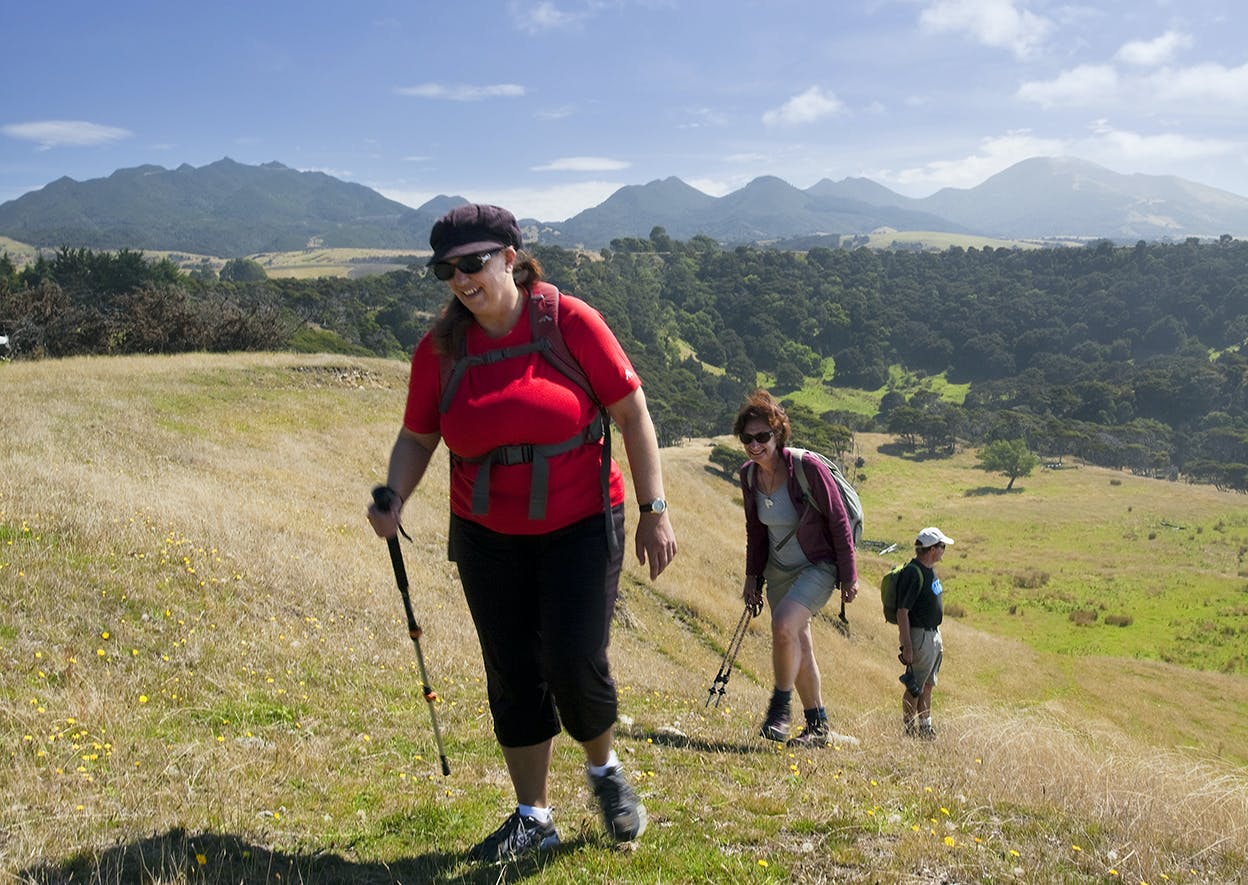 After a bite of lunch our quartet climbs onto the cliff-tops, following white marker poles. At The Lookout a weathered bench and quirky signpost make for a great photo stop. A pair of binoculars is provided to peer southward towards Banks Peninsula, or search for humpback whales. We gaze through the sea-spray towards the distant bulk of the Seaward Kaikoura Ranges, crowned in early-season snow.

The track through Medina Station leads us inland. We sheepishly skirt past paddocks of Angus bulls, heading towards the Hawkswood Range which looms ahead. A muddy 4WD track takes us down into a gully where we sidle along a slot canyon, criss-crossing the creek, keeping our shoes dry by dancing over the stony bed. Birdsong is evident in the remnant podocarp forest, retired from grazing three decades ago, now protected by a QE2 covenant. An impressive kahikatea towers overhead, and we pass beneath matai, totara, lancewood, titoki and five finger.

Eventually, the narrow path tops out onto a grassy ridgeline. Back in the sunshine, we drink tea and take in the sublime coastal views. Flocks of sheep crowd the hillsides as we descend through scraps of bush to skirt a stagnant pond. We emerge from the trail onto the home paddock of Medina, a stone’s throw from Peter and Megan Handyside’s farmhouse. Our custom-built accommodation is The Whare, a charming crib tucked into the edge of the clearing. Not far away are a row of dog kennels whose inhabitants often visit us as we lounge under a shady verandah, sipping home-made lemonade.

In the cool of the evening, Sally Handyside pops over for a chat. While her son runs the farm, she entertains guests. Sally hands us fresh farm produce, one of the small ‘extras’ that make this private walk so memorable.

Saturday sees us sleep in. The Canadians are long gone when we drop off our packs and chilly bin at the luggage depot. Carrying only a day-pack and wearing light footwear, I find this to be quite a change from my normal backcountry journeys. Up a metalled driveway, we follow a 4WD road, gradually gaining altitude onto a barren ridgeline. Crossing a stile into Hawkswood Station, we notice the infestation of broom which has made mustering almost impossible. A fair grunt up a bulldozer road preludes another damp foot track through dark bush. This links with an old vehicle track that hugs the flanks of Mt Wilson, the highest point on the KCT (649m). 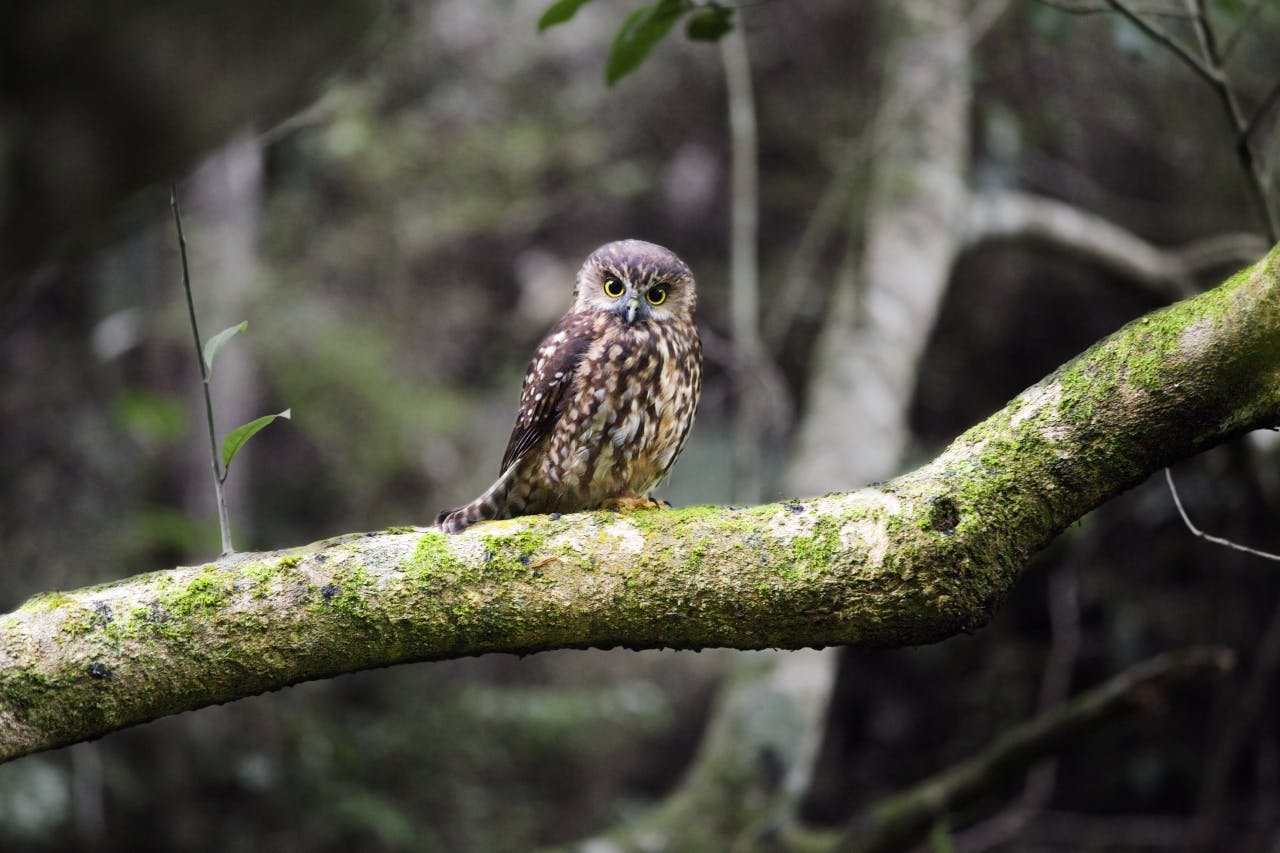 As we crest the brow of the range, our efforts are rewarded with views to the Southern Alps, dusted with snow, unfolding in the distance.

Sweating up a series of switchbacks in the midday heat, we are relieved to see the sign: ‘10 minutes to hut’. Lynette heads off to the shade of this bucolic mud-floor shelter. Hot drinks and a gas cooker are provided. After scrambling over the summit of Mt Wilson, I re-join my partner for lunch.

Sidling beneath Goat Hill, we meander down an interminably long farm road, side-lined by broom, bracken, ti tree and even a bit of blackberry. It seems a shame to see the backblocks over-ridden with scrub. But Mike Macfarlane later explains that scientific studies have indicated that broom is a nursing plant, so it will eventually be replaced by native trees. It’s just a matter of time, I guess.

Downhill, through a minefield of cowpats, we enjoy a brief respite when entering a lovely avenue of sycamore trees, then cross a bridge over Chilly Stream. The far bank is a maze of wattle trees, and after a sharp climb we stumble along Hawkswood Station, past barns and sheds onto the main road. A few hundred metres away is the Staging Post, which J.D. Macfarlane developed to run his art festivals during the 1980s. The three-day Hawkswood Festival featured ballet and a line-up of Shakespearean recitals and concerts. JD’s legacy also includes a range of horse-drawn carriages and vintage machinery on display.

Squeezed between the rammed-earth and mud-brick cottages of the complex, Ash House is an oasis of luxury and comparative modernism, sporting a plethora of flush loos and hot showers. There’s even a TV.

Linda Garrett is our hostess and duly arrives on her bike, attended by a trio of western Highland terriers. Chatty and fun-loving, she is responsible for managing the campground, B&B and entertaining the KCT walkers.

By Sunday the weather has packed in, and so has Lynette. When Bruce appears to transport us to the next track head, my wife opts to spend the morning picking blackberries with his family – no more walking for her. That’s one of the advantages of the KCT: if you’re exhausted or too unfit to complete the walk, your hosts are sympathetic and helpful.

A real character and gentleman, I will remember Bruce Macfarlane as the Six Billion Dollar Man. He tells us how a real estate agent offered to buy Ngaroma, saying that ‘money was not a problem’. To the man’s surprise, Bruce jokingly replied that he wouldn’t sell his land for less than six billion dollars. 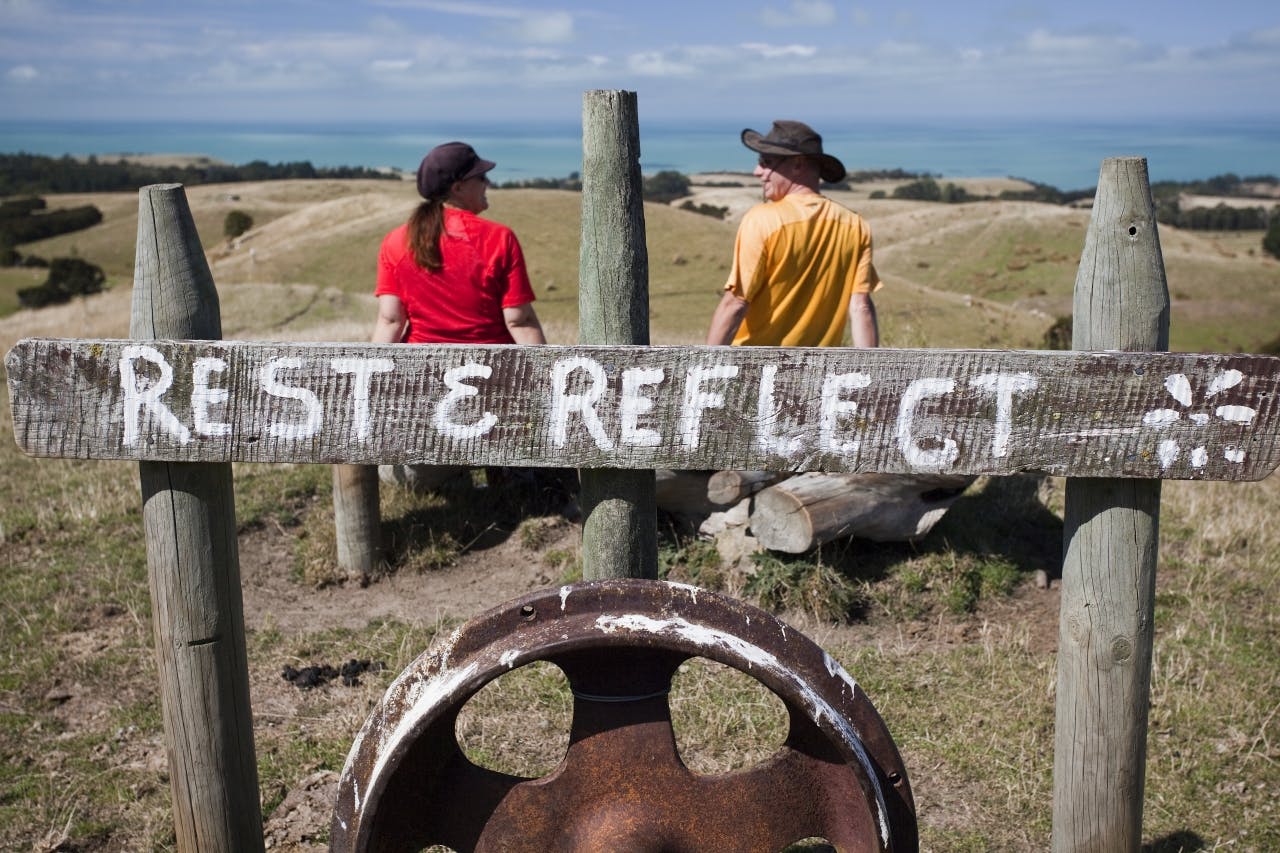 In contemplative mood at the top of Medina Station. Photo: ray Salisbury

Track markers lead us into ancient native forest which includes another giant kahikatea as well as beech. A little further on, we are delighted to see a sleepy ruru resting on the bough of a tree. Our morepork is harassed by a rowdy gang of fantails, which eventually chase him off his perch.

Above the bushline, the spectacular six-billion-dollar-views are shrouded in mist, saturating the long grass and making our footwear sodden. Enveloped in this duotone realm of brown and white, we have lost our bearings and sense of direction. Searching for the next marker pole in the clouds, we sidle below Skull Peak, slipping and sliding along farm tracks.

After two hours’ brisk travel we dive inside the fabulously-sited Skull Peak Shelter. Igniting the gas ring, the billy is boiled for an extended lunch break. We sit on the twin bunks sipping tea, relaxing inside this character hut.

Onward and downward, along Telegraph Spur, past Silvie’s Gate into Possum Drive Bush. Each feature of the farm is conspicuously labelled with a quirky sign, injecting a bit of fun into the 40km tramp. The narrow, hand-cut tracks here are slippery in the falling rain, but serve to provide some diversity from the grassy paddocks above.

Reaching Back Paddock, we quicken our pace, now on the home straight. We then climb up behind the tractor shed at Ngaroma Station to arrive back at The Loft, where Lynette is waiting and hot showers beckon. We have completed a full marathon, and done it in style.

Driving home, we are delayed by an accident. I switch the car engine off as my mind drifts back to the friendly farmers of the Hawkswood Range. How they’ve used good old Kiwi ingenuity and lots of hard yakka to make their land more lucrative; cutting tracks and building huts; how they’ve protected the trees for future generations, and how they go the extra mile to make sure you won’t have to.