Even before the age of Pong* and 404 error messages, map makers were able to draw lines representing the height of every square metre of New Zealand. Matthew Pike asks how on earth this was possible.

I love maps. I always have, ever since I was six-years-old and would sit on the back seat of the car obsessively matching landmarks on a road map to the outside world.

I’d be fascinated by the relative difference in size of a village represented by four dots compared to one represented by six. I’d also watch in eager anticipation when approaching a river or a beige smudge that represented a town. This was exciting stuff! (Women, form an orderly queue).

As I matured into an equally Sheldon-esque adult; graduating from road maps to topo maps with the new dimension of detail they offer (I could now differentiate between if I was approaching scrub or scattered scrub), my mind would often drift to those who put these maps together. It’s an astonishing effort by cartographers with the sort of patience to drive a normal person to despair. 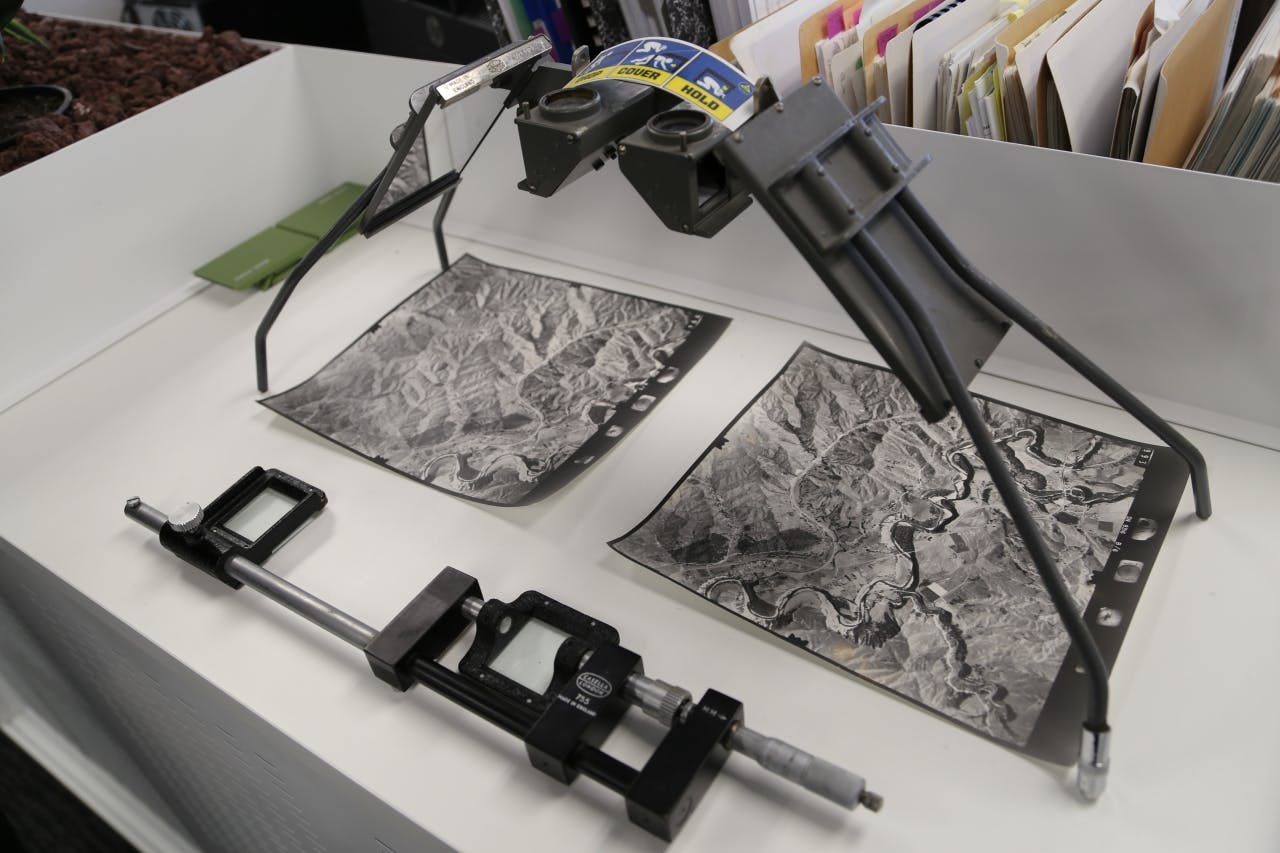 But despite the obvious agonies associated with mapping an entire country to this detail, I’d always managed to get my head around how they did it. I could comprehend the likes of surveys, aerial photography and local authorities giving vast, accurate details of the paths of roads, rivers and tracks, the position of huts, caves and pa sites and the circumference of forests, farmland and cities.

The feature that had always puzzled me was contour lines. I was eternally grateful they were there but I couldn’t for the life of me work out how anyone could accurately contour an entire nation without walking every square metre.

When I visited Map Making Mecca – also known as Land Information New Zealand (LINZ) – I wanted to understand this more than anything else.

I met a great chap called Chris Kinzett, who’s been working for LINZ and its predecessors since 1967. Nowadays, as you’d imagine, the whole process of map making and editing is computerised with specialist software that allows cartographers to change the position of a hut or the path of a track in moments.

When Kinzett, who’s now mapping team leader, began his career, things were startlingly different. Nowadays the main focus is on increasing the accuracy and currency of pre-existing maps, but in the 60s parts of New Zealand were still being mapped for the first time. “Back then our main focus was initial capture,” explains Kinzett. “There was no such thing as updating – we created from a blank canvas.”

The technology was also vastly different and any significant changes would need to be made in a photo lab. I asked the question about contour lines and Kinzett pointed me to the only mechanical device in the office. It was a stereoscope; a device with four legs and two eye holes pointing directly downwards. The holes faced two aerial photographs both showing the same area of mountainous land. The photos were positioned with a 60 per cent overlap.

“Take a look through the scope,” said Kinzett.

“That’s amazing!” I yelled, a tad louder than appropriate. 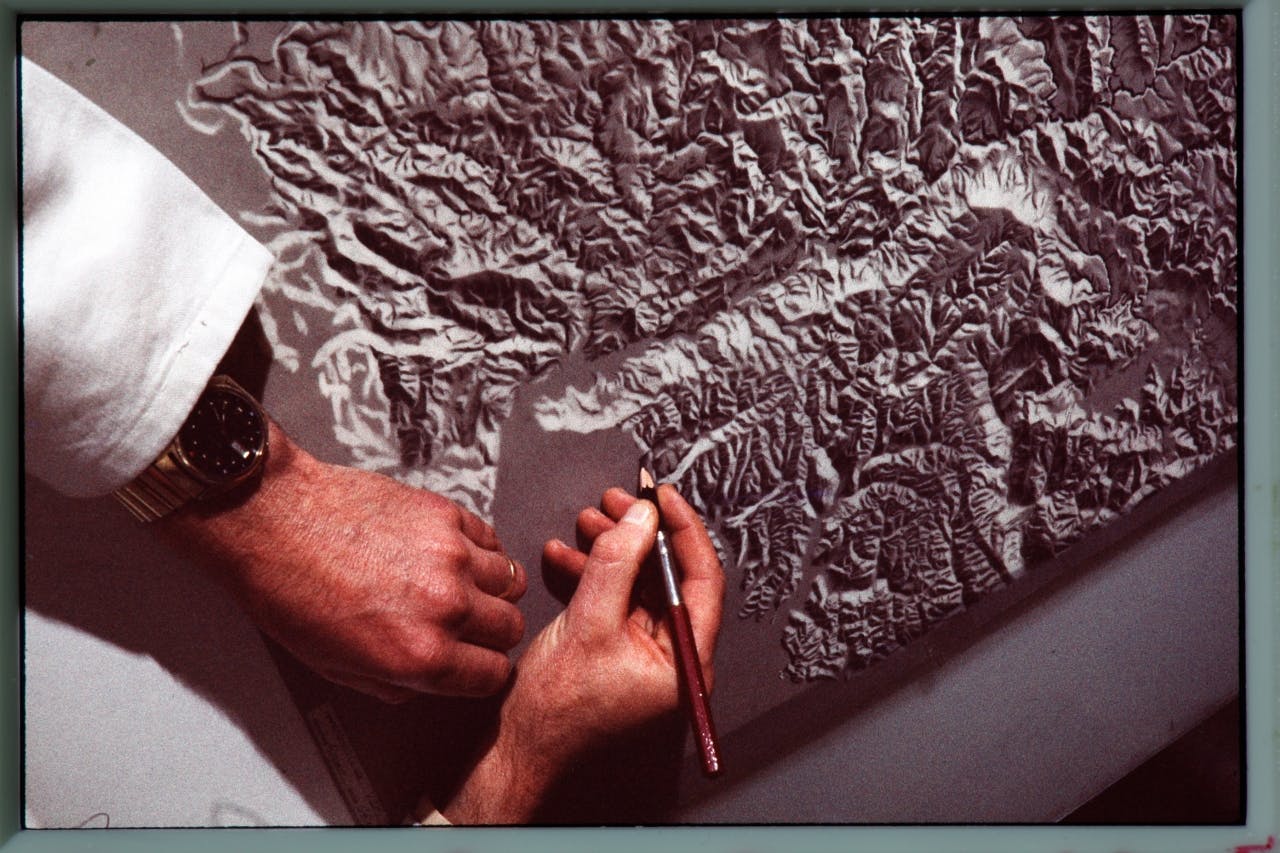 Relief shading, from the days when everything was done by hand. Photo: Supplied

If you were any good at those Magic Eye 3D puzzles that were all the rage in the late 90s, then you’d probably see what I saw; a perfect three-dimensional model of the region featured in the photographs.

The clarity of the shapes was astonishing – I couldn’t stop looking at the image. It was easier to distinguish the lie of the land this way than by using Google Earth. And it’s from analysing thousands of images like this, that contour lines were steadily and painstakingly drawn using levers and pulleys to move a dot across the surface. Unless you were commissioned to contour the Canterbury Plains, this was a lengthy process.

“One image could take a week to do,” explains Kinzett. “There was always an element of judgement. The person needed the ability to judge the distance to the previous contour. Some people couldn’t cope with it.”

A sample of the contours were then field checked by surveyors, who visited particular points to measure the contour height relative to other known survey points..

An exact science it wasn’t, but this technology has produced the contours we see on our maps today.

“When we add contour lines these days, we do so in much the same way,” explains Kinzett. “Today we use 3D glasses, look at the computer screen and move a dot with the mouse.” The stereoscope sitting in the office is now just for show, but is a great reminder of how things used to be done.

It also provides a comforting thought for the next time you’re huffing your way up a hill, cursing how accurately the contours depict your struggle. And that is that no matter how soul destroying your plight may be, it can’t be on the same scale as for the poor bugger whose steady hand and timeless patience first drew those contour lines one-by-one.

There’s an excellent video on YouTube from 1971 called From an Inch to a Mile, showing how early maps were made. It was uploaded by NZ Archives.

How trampers can change the face of our mapping

There are many ways LINZ collects data to help update its mapping. There are still the traditional methods of information gathering from local authorities and aerial photographs.

But the internet is now a resource that’s impossible to ignore. “The web’s a huge asset,” says Kinzett. “Google Street View replaces field checks for things we’re not able to depict from aerial imagery. Even the photos people take on Google Earth have helped us to identify certain features.”

This very magazine is used as a resource and is delivered to the LINZ office every month: “We’ve used Wilderness for news of hut and track changes, such as when huts burn down or bridges get destroyed,” says Kinzett. “In particular, we learnt about the Old Ghost Road from the magazine so have just updated the map with track, huts and bridges.”

But trampers with their ear to the ground and GPS devices in their pockets are also becoming increasingly valuable.

“If you carry your GPS into the hills, please give us your data,” asks Kinzett. “Tracks and huts located in the bush are very difficult to spot on imagery. GPS tracking may not always be accurate, especially under bush, but weight of numbers helps to validate data and define the true position of a feature.

LINZ doesn’t mark routes on its maps, just well defined tracks. So if you are headed off-track for prolonged periods, then your data will be less useful.

Send your GPS data to info@linz.govt.nz with ‘Topo50 Map Feedback’ as the subject.