For many of us, the backcountry hut pass is about as useful as a ticket for the failed Fiordland monorail. Matthew Pike asks what value there is for those living north of Hamilton and what they can do about it.

If you live in Nelson there are no fewer than 86 huts in the surrounding parks where you can use a backcountry hut pass; 19 in the Richmond Ranges, 21 in Nelson Lakes and 43 in Kahurangi. Even little Abel Tasman has three huts for which you don’t need to book.

Christchurch residents can use the pass for any one of 54 huts in Craigieburn Forest Park, Hakatere Conservation Park and Arthur’s Pass NP. While the pass is valid for 69 huts in Otago.

For those who live in the South Island the $120 annual fee for a backcountry pass is a bargain – a ticket to the remote and the beautiful. Even Wellingtonians are blessed with 43 huts in the Tararuas alone.

But for the 50 per cent of the population who live in, and north of, Hamilton, the story’s rather different. The Kaimais, east of the city, are home to five huts but, north of this, things become barren.

There are no huts in the greater Auckland region or the Coromandel Peninsula in which the hut pass can be used. In Northland there are just two.

There used to be more, but in recent years popular huts, such as Pinnacles, Mt Heale and, most recently, Pahautea in Pirongia, have been transferred to the online booking system for the summer months. A technical snag where pass numbers can’t be verified on the booking system means hut passes can’t be used to book these huts.

A new online booking system which can verify hut passes is hoped to be operational by 2015-16. This will make Jumbo, Powell and Waitawheta huts easier to book, but it doesn’t look as though it’ll make any difference to the other huts for which the pass will still be invalid.

Campaigners, including Wilderness, have long pushed for more huts in the north. Loyal pass holders, such as Auckland Tramping Club president Tony Walton, are dependent on big trips south to get their money’s worth.

“I go to the South Island and lower North Island with the club,” says Walton. “Down there the hut passes are valuable, but up here we’re having to go further afield to use them.”

Walton argues that although DOC doesn’t have as many places up north to build huts, there are still possibilities. “In Pirongia, for instance, there were reports of 40 people squeezing into the old hut. That suggests to me that there aren’t enough huts there.”

Walton believes Pirongia could do with another hut as well the replacement hut at Pahautea and that there is ample opportunity for new huts in the Coromandel. “Places need to be geared for people going for the weekend, perhaps with a 4-5hr walk in and another out the other side. There are a number of areas suitable for that and, with the number of people who live here, they would get used.” Walton says 80-bed huts, such is the case at Pinnacles Hut, aren’t required – basic huts are just fine. “But booked huts seem to be creeping in and it’s getting harder to find places to go,” he adds.

Morris doesn’t bother with a hut pass and feels the system’s inconsistent.

“When Waitawheta Hut, in the Kaimais, went into the booking system, the FMC spoke with the area manager and you can now call or visit the office with your hut pass,” she says. “This is common sense, but the same doesn’t apply to similar huts (also in the booking system), so there’s inconsistency.”

Morris, who is a former conservation board member and former executive member of the FMC, is also frustrated that Ketetahi Hut in Tongariro National Park, hasn’t been replaced, meaning another hut to strike off the list that upper North Island pass holders could visit in winter.

“As I understand it, before the eruption of Te Maari Crater, it was in the park’s management plan to re-site the hut to a site not on the path of the Tongariro Alpine Crossing, to stop day trippers wandering in. I think after the eruption they decided not to replace it due to budgetary cuts.”

DOC says budget isn’t the reason there are no plans to replace the hut, but rather safety issues and the cultural value of the area.

“The decision not to replace the hut is because of the unpredictability of Te Maari,” says Paul Carr from DOC’s Tongariro office. “It’s one of the most closely watched vents in New Zealand. We want to keep people as safe as possible. We’re not predicting another eruption but we’re not 100 per cent sure.”

Harry Keys, from DOC’s Turangi office, says re-siting the hut elsewhere in the park isn’t viable either. This is because Central Crater is also a volcanic hazard zone, the Tongariro Northern Circuit is well-served with huts and to put a hut elsewhere in the park would mean building more tracks – something the management plan strongly resists due to the erosion this causes. 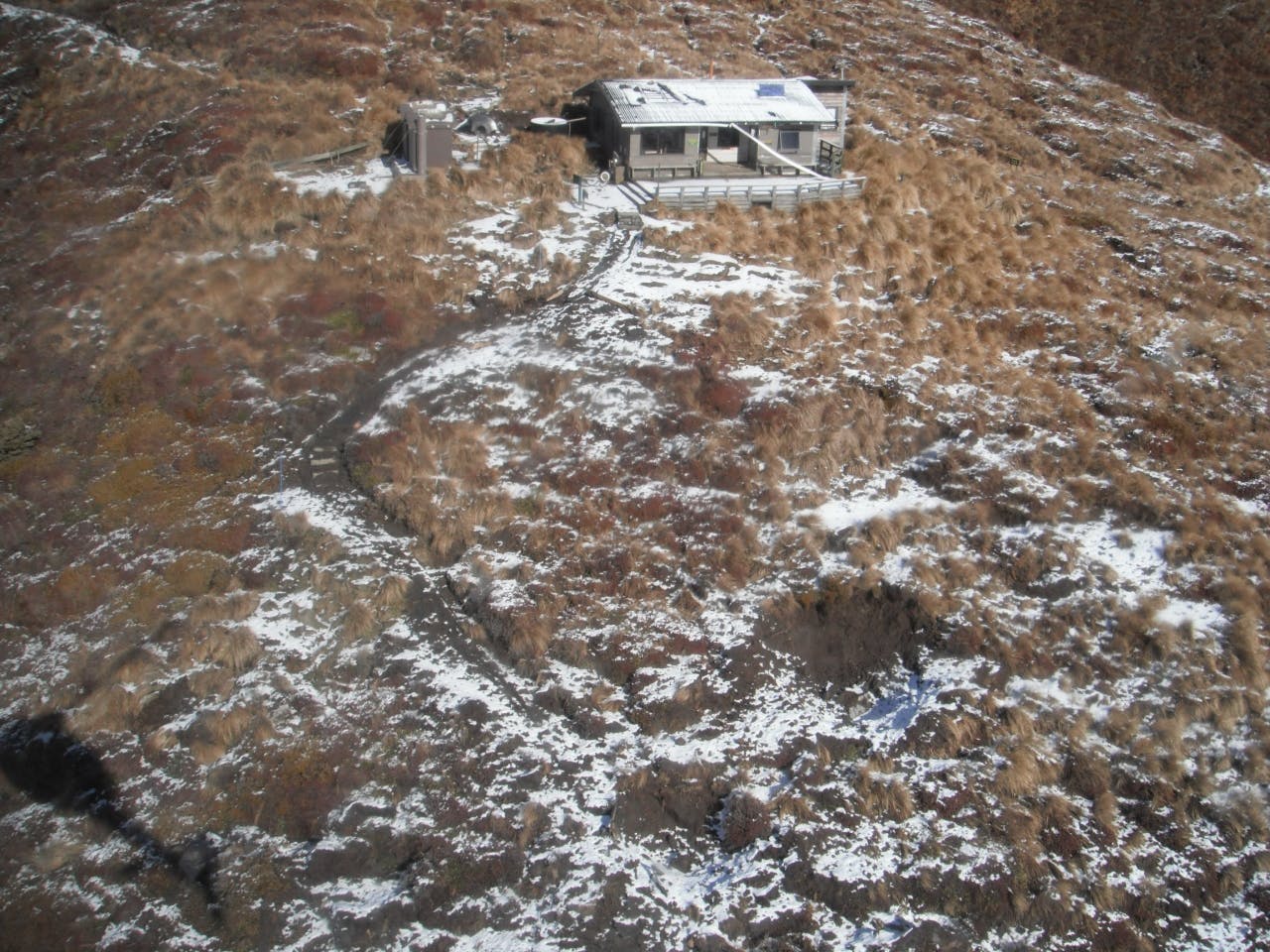 Katetahi Hut was destroyed in a volcanic eruption and will not be replaced. Photo: DOC

Although hut pass holders in the north are most affected by the online booking issue, South Islanders are not immune to the changes.

The likes of Abel Tasman Coast Track and Heaphy Track are now considered Great Walks year-round, rather than just in summer, and popular huts such as Angelus and Welcome Flat have also joined the online booking community.

Most would accept that certain huts require this system at various times of the year. One only has to remind themselves of the horror stories at popular huts such as Anchorage on the Abel Tasman Coast Track. In peak season, before they needed to book, people would run to the hut to secure a bed and the hut could be full by midday.

But FMC says each hut should be assessed individually to see if and when it’s congested before deciding whether online booking is necessary.

“You have to determine if there really is a problem,” says FMC president Robin McNeill. “There are places where there is, but sometimes there’s not, and it can be a real pain for trampers. It takes out the flexibility.

“I think the huts on the Dart Track are going to become online booking too. If more huts are taken out of the hut pass system then it removes the value of the pass. It’s important the pass doesn’t diminish in value – it encourages participation and compliance and helps people to feel like they’re contributing to DOC’s huts and tracks.”

And as for the issue of a lack of facilities in the north, DOC’s Community Conservation Partnership Fund (CCPF) seems to highlight the direction the department wishes to go. The fund is dishing $26 million to help volunteers improve conservation and recreation. This year $700,000 has been given directly to groups who use the backcountry to decide which projects most need it.

DOC Director General Lou Sanson says the department is aware of the issues concerning facilities in the north and is moving away from an ethos of ‘DOC knows best’. The CCPF appears to be consistent with this new approach, as it puts the decision making in the hands of those who use the backcountry, rather than the department.

Taking full advantage is a group of tramping clubs from the north, led by Auckland Tramping Club, who are working on the principal of ‘if you want something done right, do it yourself’.

These clubs want to spend the next five years building a 4-5 day ridge walk through the Kaimai Range. They see the region as having huge potential, but it’s currently underinvested with rough tracks and tatty huts.

Tony Walton feels the large population surrounding the hills gives huge scope for increased participation in the area. “We’ve had really positive feedback from groups in Auckland, Waikato, Rotorua and Tauranga, who feel this is a real opportunity to do something and make it happen,” says Walton. “We want to capitalise on people’s enthusiasm to get involved.

“CCPF funding makes groups more independent with volunteers and local groups setting their own priorities – not just doing what DOC wants to do. Financially DOC is very stretched and this is a way to share the load.”

DOC has made it clear that supporting voluntary projects is the way it wants to go. The value of the backcountry hut pass now appears to be in the hands of volunteers who love the truly remote areas enough to look after it themselves.

But is it fair for DOC to keep chipping away at the value of the hut pass for the 1500+ pass holders who used to be able to use this pass for pretty much any hut they wished?

These pass holders are to DOC what subscribers are to Wilderness. It’s the equivalent of us saying to our readers that the subscription price will stay the same, but next year only 11 of the 12 issues will be available to subscribers, and the year after that only nine.

The current system’s confusing and has been inadequate for long enough. When DOC updates it for the 2015-16 season there’s no reason why the likes of Angelus, Welcome Flat, Crosbies, Sandy Bay and Cape Brett huts can’t become available to pass holders once more. An insufficient booking system will no longer be an excuse and the tramping community must push to make sure the hut pass becomes something worth having again, wherever you live.