Smoke drifted across the valley from a campfire made from river stones. Bellbirds sang, the river burbled, and people poured themselves generous mugs of billy tea. Camp oven scones emerged and, smothered in butter and jam, were eaten hot.

It might have been a scene from a deer culler’s camp anytime between the 1930s and 70s, but this was November 2014, and the assorted group were here to celebrate something the old cullers would surely have approved of: the opening of a restored tent camp in Kahurangi National Park’s Cobb Valley.

These structures, once commonplace in the backcountry, were a hybrid between hut and tent; a semi-permanent structure that provided shelter, but were also cheap and relatively easy to dismantle and shift.

When government shooters began tackling the so-called ‘deer menace’ in 1930, the country was in the grip of the Great Depression. In those parts of the backcountry where there was no existing shelter, funds rarely extended to building new huts. So instead, the Department of Internal Affairs built tent camps, often using beech pole framing, and usually with a large chimney at one end. Culler Maurice ‘Red’ Fairhall, who worked in Canterbury’s Lake Sumner area in the early 1950s, described them:

‘Sometimes we might have an old musterer’s hut but mostly we put up a camp which consisted of a tent six foot by six foot which we slept in, with a big fly over the top. It had laced galley sides and you built a wooden chimney at one end as big as you could. You stacked rocks and mud in there to protect the wood, but you always kept a bucket of water alongside because the chimney would regularly catch fire … These fireplaces served the purpose. But to show how you treasured things, if you went somewhere further afield and in the long grass you found an old kerosene tin, or even a biscuit tin, you would flatten it and put it in your pack. You would take this treasure back to camp and nail it onto the chimney. Some of those chimneys were really elaborate …’ 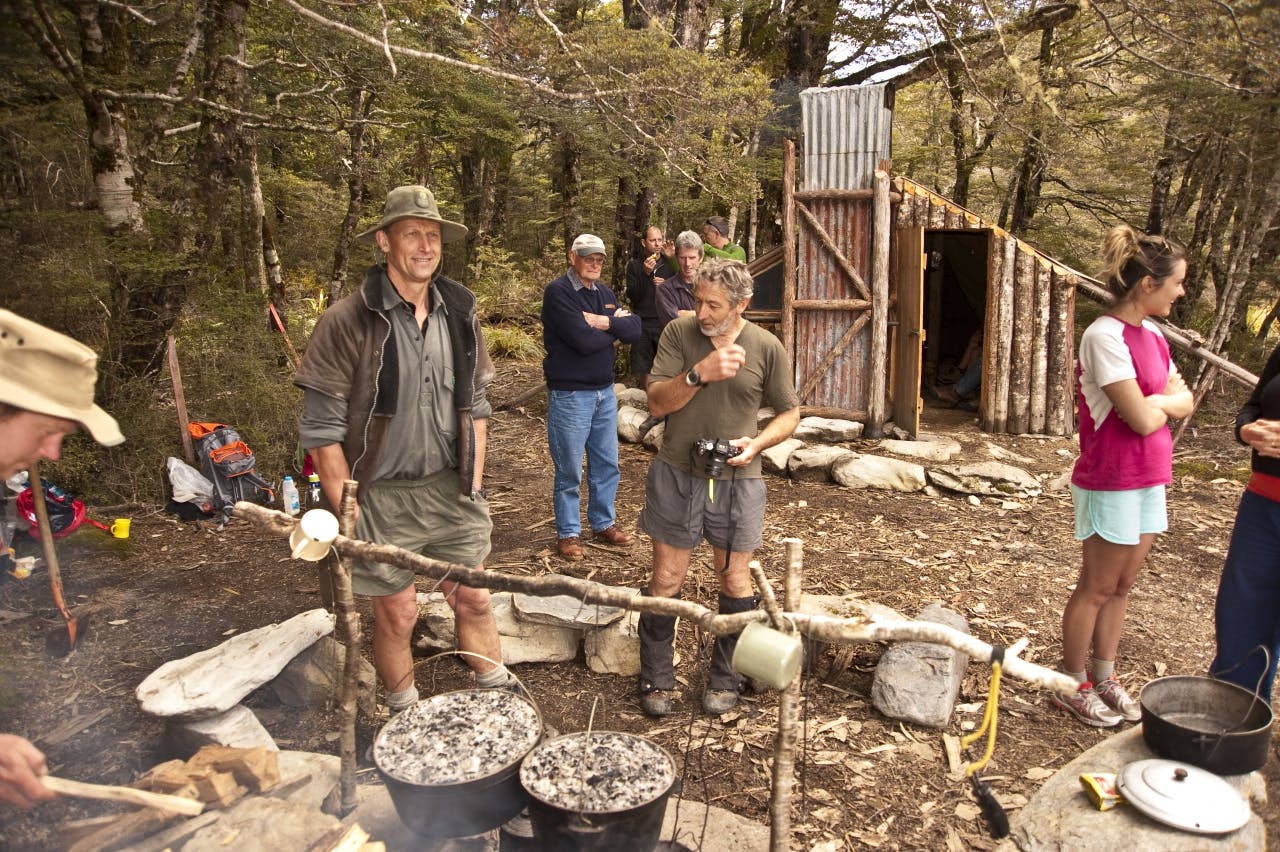 Because the canvas was prone to destruction by heavy snowfall or – in the South Island  – vandalism by kea, the camps were often dismantled during the winter months. While not as robust as huts, they served for decades and many cullers developed quite an affection for them. But during the mid–1950s, the Forest Service began its extensive hut-building programme and the need for tent camps began to be supplanted. Over the next two decades, especially after helicopter hunting superseded ground cullers, they largely disappeared – persisting in  only a few areas. In the Ruahine Range, for example, several still existed during the 1970s, long after ground culling was largely finished.

But by the turn of the new millennium, very few remained. It seemed that soon we would only have the cullers’ descriptions to tell us what these camps were like.

By 2010, possibly only one, that in the Cobb Valley, remained intact – although it was rapidly becoming derelict.

Forest Service ranger Max Polglaze and two others first erected the tent camp in May 1973, in what was then known as Northwest Nelson Forest Park, to house workers who were upgrading the Cobb Valley Track. During the mid-1980s, it was shifted to its present site by ranger Hugh Mytton.

During the summer of 1987-88, I spent a week staying in the tent camp while employed as a DOC summer ranger. It was a novel experience to sleep under something that had the spaciousness of a hut but, instead of iron, had a canvas roof that sighed in the wind. And it sparked an interest in me to learn about the origins of these structures.

When, some 25 years later, I co-authored Shelter from the Storm with Rob Brown and Geoff Spearpoint, we naturally included a section on deer culling, and noted the Cobb Tent Camp was ‘probably the only remaining intact one in the country, but badly needs historic recognition and restoration’.

That comment sparked an idea in the mind of DOC ranger John Taylor. Based in Takaka, he’d already worked on several old hut restorations in Kahurangi National Park, including Riordans Hut with Max Polglaze, and later Waingaro Forks Hut. Most recently, he’d helped the local branch of the Deerstalkers’ wonderfully restore Chaffey Hut, also in the Cobb Valley. Wouldn’t it be grand, he thought, to restore the old tent camp, too? It was the last major ‘hut’ restoration project needed in the Golden Bay area.

Taylor immediately gained the support of his manager John Mason, but they had a problem: they needed to replace the canvas, get it upholstered to an original tent camp design and transport materials to site, but the shoestring budget wouldn’t stretch that far.

So John Taylor turned to the local community, which responded with interest and generosity. Mark Allinson, of Shade Upholstery & PVC, Golden Bay, came on board and persuaded Defab Weavers and Australian manufacturer W. Wiggans to donate the canvas. Then Mark and staff from W.A. Coppins and Tasman Canvas (both Motueka), completed all the upholstering – for free. Deerstalkers and Friends of the Cobb helped prepare the site by carrying river stone to make a higher foundation.

When all was ready in July 2014, Taylor and fellow ranger Tony Hitchcock spent two weeks putting the camp together, living on site. During the winter months, the daylight is short, the site gets no sun and frosts lie thick on the ground. One night, Tony’s mug froze to the table.

Undeterred, the men cut hard-to-burn mountain cedar for the new chimney frame. Recycled corrugated iron served as the chimney walls. They cut beech poles for the front wall and used red beech for the door. Using manuka, they fashioned the frame, then stretched and tied the new canvas into place.

The finished product is a bit like Hone Heke’s axe, with most of the old bits replaced. It’s a genuine replica of an original deer culler’s tent camp, with a main cooking room, into which you enter, then a smaller sleeping room at the back, which can be closed off using canvas flaps. The men also made rough-hewn wooden stools, a bench from red beech and installed an informative panel that tells the camp’s story.

With a job well done, all that remained was to officially open the structure. About 40 people gathered on that fine day in November, including Taylor, Hitchcock and Allinson and the other upholsterers who had donated their skill and time, as well as assorted trampers and locals. Of special significance was the presence of Max Polglaze and Harry Ferris. As well as being rangers strongly associated with the area, both had previously worked as cullers, with Ferris beginning his time in 1949.

When the tea was drunk and the scones demolished, Taylor and others made speeches. Ferris spoke of the early 1960s, when he was instructing aspirant cullers how to set-up and dismantle tent camps at Dip Flat, then the main Forest Service training camp.

Then it was time to boil the billy again. Smoke drifted across the valley, a light breeze ruffled the canvas and in time-honoured fashion we traded yarns. A few of us stayed on overnight, some sleeping in the tent camp. Taylor left early in the morning, before any of us had risen, but he’d set the billy swinging over a newly-prepared fire so we’d have hot water for breakfast. That man is a credit to his department, I thought.

The Cobb Valley Temp Camp restoration serves as a fine example of the government and the community combining efforts. Thanks to them, we have a fully functioning tent camp – one that the public can stay in and appreciate – as a living example of how the cullers once lived.