In this day of digital everything why would anyone write in a tramping diary? Shaun Barnett still does and others also keep a colourful, personal record of their trips and outdoor experiences

It seems old-fashioned in this digital age: hand writing in a notebook. But I’ve kept it up for nearly 30 years, and the records of my outdoor trips now fill 31 exercise books. Another dozen record overseas treks and trips.

The first tramping one is a Warwick 3B1 school notebook with a red cover, and the entries are perfunctory: ‘August 1985 – Makahu Saddle Hut to Kaweka Flats Bivouac and return. With Michael Bennett and Darren Morris.’

Even a weeklong trip in the Kawekas the following winter, which ended in some drama, did not get much more than a few lines: ‘Spent night at Te Puke Hut – snow! Next day plodded down to Mangaturutu in bad weather and heaps of snow. Spent night beside Makino River. Overdue at this time. Heard helicopter looking for us. Raced up to Makino Hut. Were picked up and choppered down to Pinks Hut. With Daryl Ball and Sean Husheer.’

No mention of the fact I’d been walking in just one boot after the other one had disintegrated, or the fact my sock had frozen in the snow. No mention of Daryl’s feet, almost frost-nipped in steel-capped boots, and with blisters the size of pikelets on each heel, which made walking an agony. Failure to record the waist-deep slog we’d had through snow on the tops, or the hours we’d lost when we came off-route. Nothing about the bitterly cold experience of sleeping on the ground beside the Makino, with no sleeping mat. No lines to express the anguish of knowing we’d worried our parents, and no acknowledgement of the fine efforts of the SAR team. It was simply the barest bones of a tramp that went wrong for three inexperienced youths.

After I’d filled that first small notebook, I graduated to a spiral-bound 8B8 Massey University lecture book. I didn’t carry it with me on trips, but wrote entries after I got out of the hills. This diary has more detail, but seems mainly focussed on route notes, track times and hut conditions – reflecting my ambitions to one day write a guidebook. I did, however, record the occasional conversation, like that following an unpleasant leatherwood bush bash in the Ruahines: ‘I said to Andrew, “I bet Jo will be glad she didn’t come”. I then thought, “I’d be glad if I hadn’t come”.’ 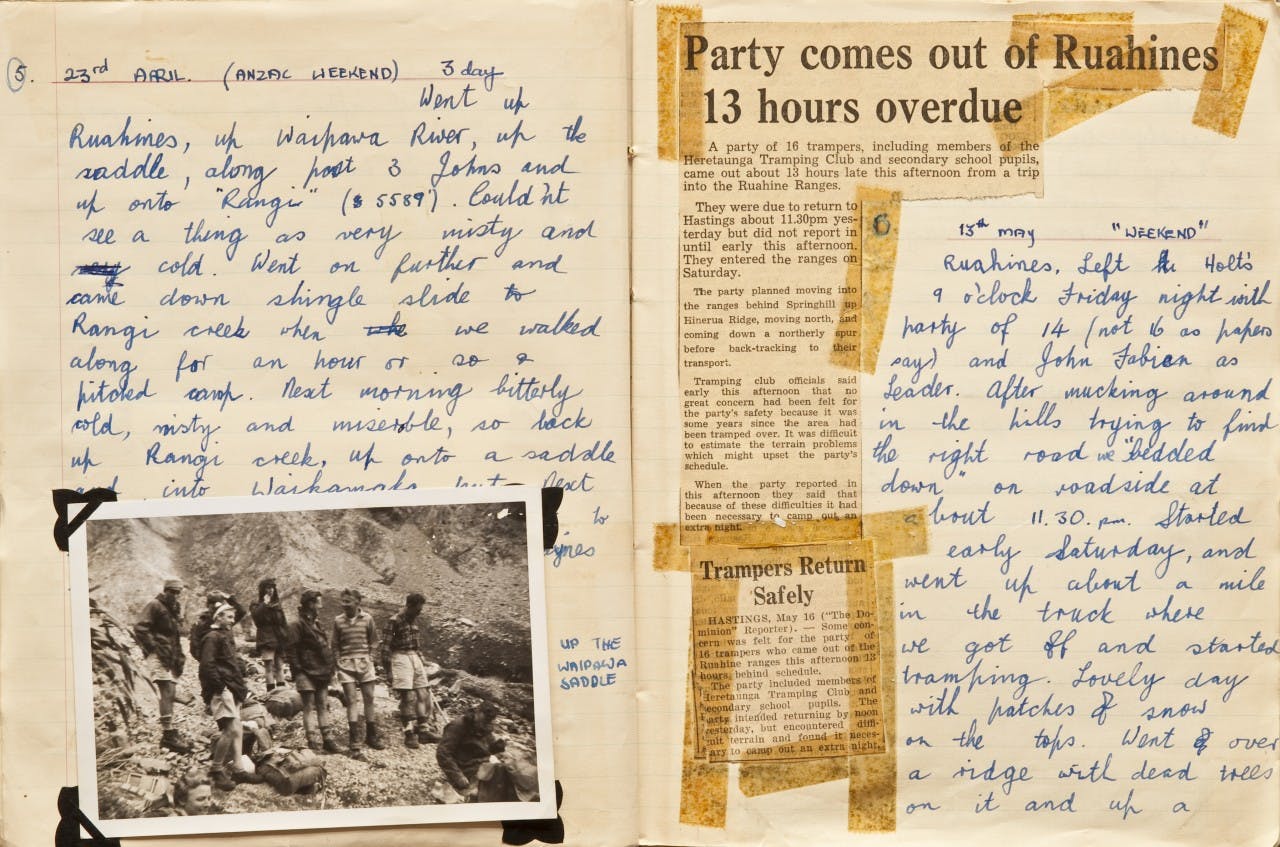 After filling seven spiral-bound volumes, I grew tired of the effort needed to write-up each trip after the event. Instead, I’ve opted for a slimmer and lighter 1B4 exercise book, in which I happily record the trip as it happens. Each evening I jot my impressions, and occasionally record conversations. Sometimes I write at lunchtime, to keep the events as fresh as possible.

But why keep a diary? Why bother with the effort?

On a personal level, my diaries mean I have a record of every trip I’ve done. Memory is faulty at best, and absent at worst. Re-reading diaries reminds me of tramps and even companions that sometimes I’d completely forgotten. Other times, I find that my memory does not coincide exactly with what actually happened on a trip; and the diary helps set the record straight.

Writing a diary as the trip unfolds has also paid dividends when I write articles; I think it helps to impart a better sense of place and people than a dry account written some time later. For example, on a recent trip to the historic stone Sam Summers Hut, near Queenstown, I wrote: ‘I brewed tea over a small economical fire, using a kettle from the hut … and found a flattish space to sleep. For all its charm, the hut smelt strongly of rodents, and besides it was a mild, fine, calm evening – perfect for sleeping out. There’s a small waterfall just above the hut, which sung to me all night, and I stared up into the lacy silhouette of the beech trees, with the odd star showing in the gaps.’ Such simple but enjoyable moments are soon forgotten.

To a large degree, my diaries have been the basis of a career writing about the outdoors.

But what about a tramper who never intends to publish articles? Why bother with a diary? Perhaps the most compelling reason is to provide a record for the future. Over time, even the most mundane things can become interesting. Nothing stays the same; huts, gear, people all change, and even mountains too. A diary, then, becomes useful for the historic record, a barometer of change. And it becomes a window into the past for family members, or historians.

In our recent book, Tramping, A New Zealand History, Chris Maclean and I drew on a wide range of sources, including diaries and photograph albums kept by trampers. Perhaps the most visually arresting were those of Tararua Tramping Club member John Gates. An architect by profession, John took his drawing skill to a high degree in his A5 sketchbooks, with its durable hardcover. Its high-quality paper echoes the work of early surveyors and explorers, who also used words and drawings to record their experiences, as well as try to make sense of the landscape.

On one page John usually records details of his tramp, while on the other he sketches the scenery. Sometimes this was in black and white, but more often he would paint in watercolours. For example, his Routeburn tramp of 1999 shows scenes of Lake Mackenzie, Routeburn Falls Hut, Lake Harris and the Darran Mountains. Other diaries show scenes from a variety of trips to places like Nelson Lakes, Mt Owen and the Hollyford. 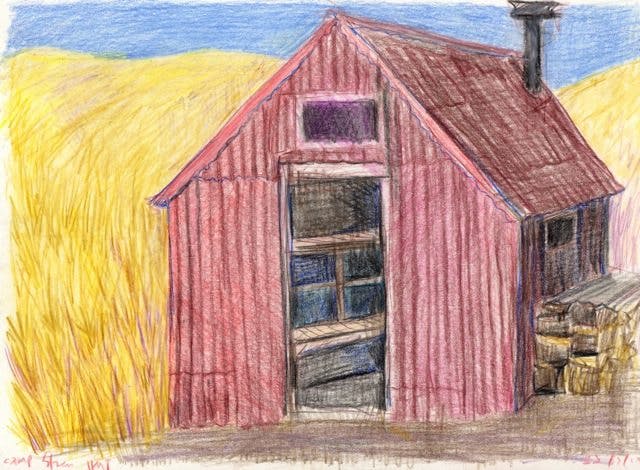 Robbie Burton’s diary from his 1980 traverse of the Southern Alps was the best-written one we came across, and the Tramping history includes a double-page spread from it.

Another diary we would have liked to include, but had to leave out for reasons of space, was that of Ken Tustin. Now famed as the Fiordland moose hunter, Tustin kept an outdoor diary as a young man when he was growing up in Hawke’s Bay during the 1960s. Like me, he cut his tramping teeth in the Kaweka and Ruahine Ranges, and recorded these formative experiences in his diaries, often adding black and white photographs afterwards. Ken was then a member of the Hastings-based Heretaunga Tramping Club, and his diary reveals much about club life at the time. For example, members often helped a local market gardener before embarking on a weekend tramp. In his diary, Ken records ‘picking tomatoes all morning’ to raise money for the club’s truck, then heading off to Kaweka Hut in the afternoon.

In addition to photographs, Ken kept newspaper clippings. These reveal the usual preoccupation of the media when it comes to outdoor pursuits: covering the activity only when someone is lost, injured or killed. The clipping from his 1960–61 diary reveals the headline: ‘Party comes out of Ruahines 13 hours overdue’ but Ken’s entry reveals more detail behind the story. The newspaper claimed 16 were in the party, but Ken records only 14 went. They’d found it heavy going in Smiths Creek which was ‘waist deep in many places and [we] had to take to [the] bush to avoid waterfalls, gorges etc.’ Darkness overtook the party, and with only a few having torches, route finding became difficult. After hours of struggle, the weary trampers gave up trying to get out, and ‘camped under a log’, finally staggering out to their truck the next morning.

As another example of the historical importance of diaries, Ken’s one finally revealed to me the year the Old Mason Hut was built in the Kawekas, something I‘d been researching for some years without success. It was later than previously assumed: 1957. 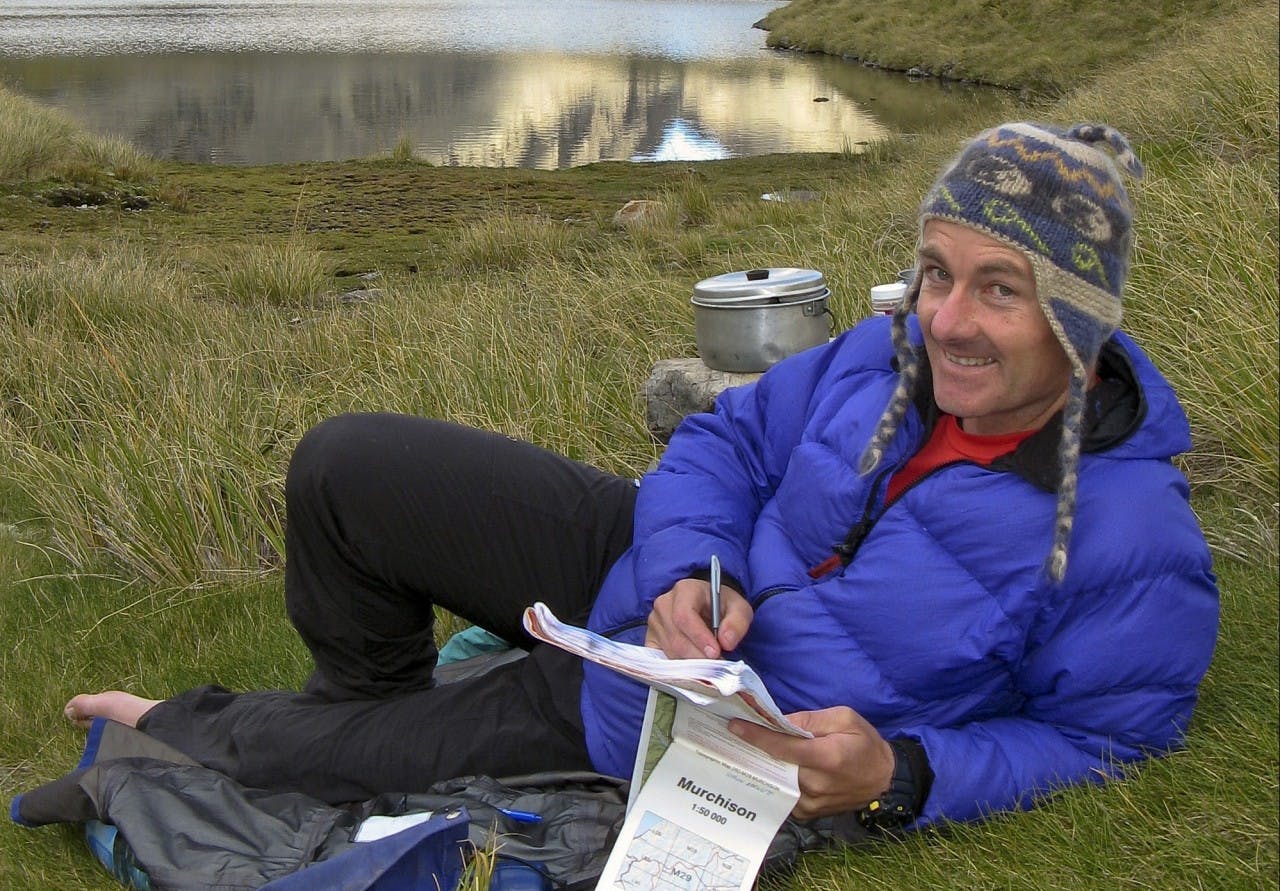 Tramper and artist Hannah Joynt is continuing the old tradition of diary keeping, but with a modern twist. While walking Te Araroa over the 2012-13 summer, she recorded the experience as a blog, but complimented this with artwork she made while tramping. “I was very much prompted by my fatigue with the way that we are practically cyborgs attached to screens, buttons and gadgets,” she says. “I wanted to do something that was simplified in as many ways as possible – walking and drawing.”

As an artist and drawing teacher at Otago Polytechnic, Hannah wanted to make an exhibition of drawings from the trail. “I notice that my memories of the places that I drew are very vibrant compared to those I captured with a camera. The act of sitting, observing the place and drawing it made me absorb and synthesize what I saw and experienced in a very deep intrinsic way.”

It’s that need to record what are often memorable experiences that motivates most of those who keep an outdoor diary. Sometimes the end result might be an art exhibition, or an illustration in a book. Other times, it might be a dusty collection of notebooks rarely seen; but there is always the chance someone in the future might find in them stories that have become interesting by their very age.

In this digital age, some might view a hand-written diary as a curious anachronism. Fire, water and neglect can destroy a paper-based record, but computers are just as vulnerable. The fact that all hard drives fail at some point, let alone the problem of formatting and reading old files, suggests to me that the age of pen and paper is not dead yet.